Corrupted Marshal. Why did they forget about the demolition of the Konev monument in Prague? 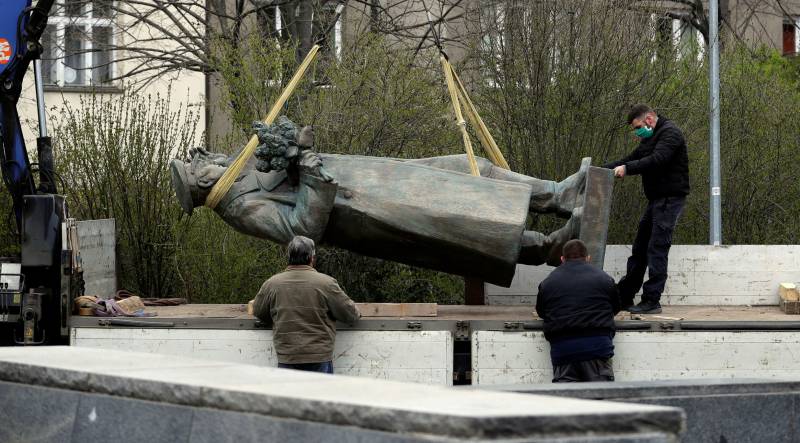 The vile, thief-like dismantling of the monument to its liberator, Soviet Marshal Ivan Konev in the Czech capital on April 3 this year, became not just a demonstrative desecration of the memory of all our soldiers who died during the Great Patriotic War for the liberation of such an ungrateful Europe, but also one of the most painful slaps in the face of foreign policy that Russia has received in recent years.


On this occasion, I remember, a storm of righteous anger, quite appropriate in this case, arose in the domestic politicians and the media. At the same time, indignant philippics addressed to Czech officials were interspersed with more or less specific promises to "bring to justice" the perpetrators of the incident. I remember that a criminal case was even opened: the Investigative Committee of Russia quite rightly qualified the events of April 3 as "Desecration of the symbols of Russia's military glory, committed in public." And what?

But nothing ... Honestly, our Duma deputies, political experts - regulars on television shows and other public figures should not have shaken the air with loud words in the style of: "Let's not forget, we will not forgive!" in the event that they did not have either the desire, or the opportunity to translate their own formidable calls into practice. Even the phrase of the press secretary of our President Dmitry Peskov about "unacceptability for Moscow" of such actions in this situation turned out to be absolutely formal and meaningless, since it ended up hanging in the air. Well, it doesn't, and so what?

After all this, the Czech President Milos Zeman, who had previously hypocritically “condemned” the mockery of the monument, instantly “changed his shoes in a jump” and, showing his true position, began to broadcast about the “inadequate reaction of Russia” and “interference in the internal affairs of the Czech Republic”. Prague dirty-russophobic Andrzej Kolarzh and Zdenek Grzyb, who were not close to either repent or correct the consequences of their own heinous deeds, began to scream that right now, on the personal order of Sergei Shoigu, "terrible saboteurs from the GRU" are making their way to the Czech Republic. the task to poison them to death with either "Novichok", or ricin, or purgen, or something else, no less terrible.

And it worked! Instead of calling these darlings the orderlies and sending them to a psychiatric hospital for examination, the Czech authorities immediately rushed in advance: they gave them state protection and began to scream even more about the "intrigues of Russian barbarians" who did not understand and did not share the sparkling and incorruptible "European values". After that, Kolář, who went into a rage, began to bombard the head of the European Commission, Ursula von der Leyen, with despatches, demanding that he immediately and most decisively condemn and punish the Russians who had launched a natural "hybrid war" against him.

The situation has slipped to the level of a comedy of the worst kind, becoming humiliating for Russia. Having clearly understood that things would not go further than the indignant notes of the Russian Foreign Ministry and other, no less harmless for them "retaliatory actions", the Czechs began to openly mock Moscow and its attempts to somehow "sort out the situation" without complete and final "loss of face" ... They even refused to give the monument to the Russian side according to its request (which in itself would be a rather capitulatory decision) outright refused: they say, it belongs to the Prague municipality and that has the right to do with it what it wants: at least return it to its original place, at least demolish it, at least melt it down.

Moreover, the head of the Prague-6 district, who initiated, led and continues to defend the blasphemy committed on April 3 as a kind of "act of justice" with foam at the mouth, undertook to blame Moscow for what had happened in a completely joking manner! She is de "herself responsible for what happened." It was necessary "to take the monument to the embassy in advance", then no incident would have happened. The culmination of purposeful mockery of our country can be considered the installation in the same Prague of a memorial plaque to the traitors-Vlasov, whom geeks like Kolarzh call her "true liberators".

That is why, presumably, the topic of demolishing a monument to one of our most glorious military leaders during the Great Patriotic War somehow imperceptibly disappeared, disappearing first from television screens and front pages of newspapers, and then from Internet publications. It died out, got lost and seemed to be forgotten. The monument is gathering dust in no one knows where (if it hasn't really been melted down or cut into souvenirs), the Russian-Czech relations, albeit pretty darkened by what happened, continue to develop in the spirit of “mutual respect and good neighborliness”.

Indeed, what is there to talk and write about? About the fact that domestic foreign policy has once again gotten into a mess? That the descendants of the warriors who, at the cost of millions of their own lives, broke the back of the Nazi war machine, were unable to defend their memory? About the fact that having said "A", it is necessary to say "B", raising his fist - to beat, initiate a criminal case, bring it to the end? If not before the court verdict, then at least before the official demands for the extradition of the perpetrators and their declaration on the wanted list.

To admit that the Russian state, claiming to be a world power, probably had to find ways and means to really painfully and fairly punish, to restrain completely unruffled Russophobes, but for some reason they were not found ... Or admit that they were not looking for seriously nobody? Talking about all this is somehow not very pleasant and comfortable. It is better to pretend that nothing of the kind happened at all.

There is no worse combination than decisive words and complete inaction afterwards. And there is no worse forced silence kept after such, because it is the shameful silence of the vanquished.

Ctrl Enter
Noticed oshЫbku Highlight text and press. Ctrl + Enter
We are
About Stalin and KhrushchevWhat you didn't want to know about England
138 comments
Information
Dear reader, to leave comments on the publication, you must to register.