A promising PGRK for the Strategic Missile Forces of the DPRK 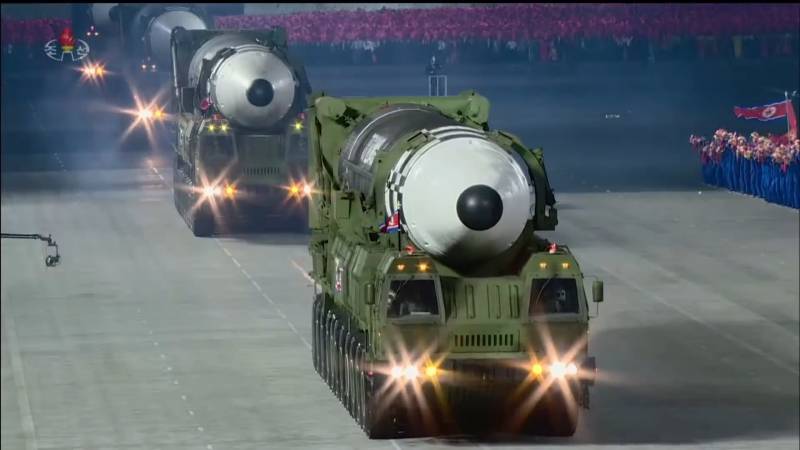 On October 10, a military parade was held in Pyongyang to mark the 75th anniversary of the DPRK Labor Party. At the event, the Korean People's Army displayed a range of promising prototypes of all sorts, including a new mobile ground-based missile system with an intercontinental ballistic missile. The potential adversary has every reason to fear these products.

North Korea has not disclosed information about its development projects. Until October 10, the new PGRK was not officially reported, and any information about such systems appeared only at the level of rumors. Now the complex was shown to the public. However, according to the old "tradition", the name of the product was not named; the main characteristics remain unknown.

The parade crew included several self-propelled launchers of impressive appearance. They are built on the basis of an 11-axle special chassis of an unknown brand with a wide "double" cab. All the necessary units are placed on the chassis, including a launcher with a luffing boom and a large launch pad, as well as jacks for hanging out before launch.

ICBMs of a new type are transported and take off without the use of a transport and launch container - thanks to this, its appearance is already known. It is a large product with a cylindrical body and a tapered head. The products shown had a characteristic color with monotonous and staggered areas. 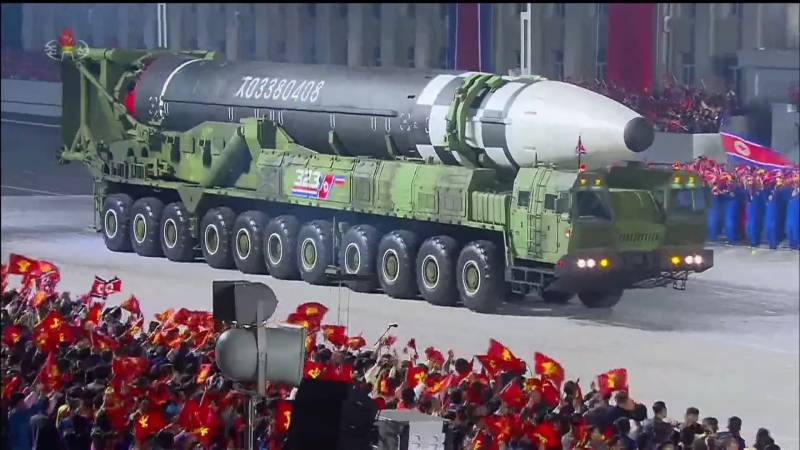 Thus, a new complex has been created for the strategic missile forces, capable of patrolling in certain areas and, if necessary, going to a firing position to perform a launch. At the same time, the new PGRK has not yet been brought to testing. Official North Korean and foreign sources have not yet reported on the launch.

To date, the DPRK has created several intercontinental missile systems with different characteristics. They were developed through consistent refinement and improvement of designs with the introduction of new technologies and solutions. Thus, the two-stage product "Hwaseong-14", which was put into service by the KPA several years ago, throws a warhead at 10 thousand km. The later Hwaseong-15 ICBM, tested since 2017, should fly at 12-13 thousand km. Both complexes are movable.

The new ICBM, shown in the parade, differs from its predecessors in greater length and diameter, and also has an increased mass. All this led to the need for a new 11-axle chassis. For comparison, the previous PGRK "Hwaseong-15" with an ICBM with a length of approx. 23 m with a mass of 72 tons was managed by a conveyor with nine axles. Thus, the length of a promising rocket can reach 25-27 m, and the launch weight - 80-100 tons.

The appearance of the new ICBM indicates the use of a two-stage scheme with a separate stage of the combat load. It differs from its predecessors in the increased length of the first stage and large volumes inside their casings, available to accommodate fuel and oxidizer. 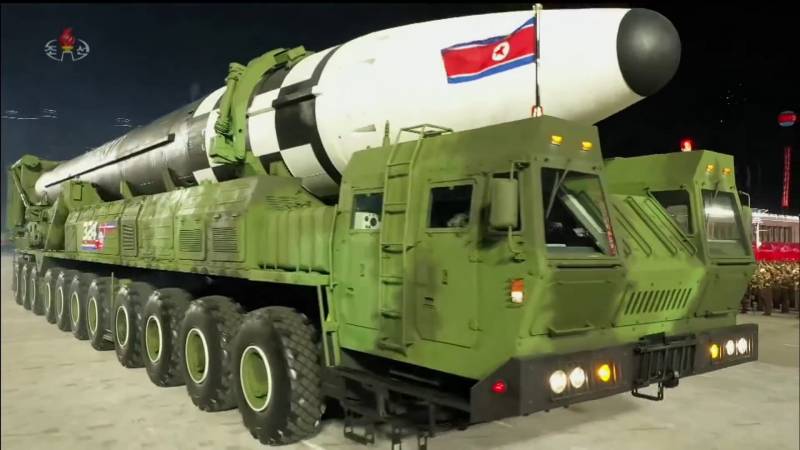 The camera angle allows you to see some of the features of the cockpit
Building on previous projects, the new ICBM should have liquid-propellant engines running on asymmetric dimethylhydrazine. The need to increase the flight range led to an increase in the required volume of tanks, which affected the mass and size parameters of the rocket and influenced the requirements for the chassis for the launcher. At the same time, a version is expressed about the use of a hybrid scheme - the second stage can use a solid fuel engine.

According to various sources and estimates, the Hwaseong-15 ICBM is capable of carrying a monobloc or multiple warhead with individual guidance units. The mass of combat equipment is at least 1 ton, and in both cases, nuclear warheads are used. A new ballistic missile must maintain or increase similar characteristics. It can be assumed that the MIR becomes standard equipment, and the throw weight is increased in proportion to the growth of other characteristics.

The performance characteristics of the PGRK in general and ICBMs in particular are unknown, and North Korea is unlikely to reveal them in the near future. The observed design features suggest that the new missile will surpass the previous ones in terms of its main parameters. The maximum range of "Hwaseong-15" is estimated at 13 thousand km. A larger ICBM of a new type with a different energy will exceed this threshold. It is possible that an exit to the level of 14-15 thousand km will be provided. The first realistic conclusions of this kind can only be drawn after testing.

For all its strengths, the new North Korean missile is unlikely to be able to match the developments of world leaders in this area. Modern ICBMs, not to mention promising models, combine a range of 10-12 thousand km with a throw-weight of several tons, a multiple warhead, etc. As can be judged from the available data, the DPRK has not yet mastered all the necessary technologies and while its developments will lag behind foreign ones. 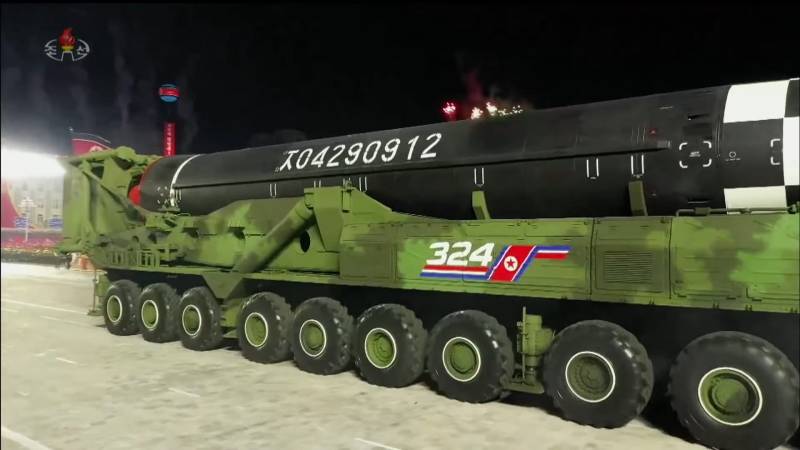 The operator kindly showed the units of the launcher
Certain questions are raised by the presented chassis, which became the basis for the PGRK. Earlier, foreign media spoke out and discussed the version about the Chinese origin of the carriers for the Korean missiles. Allegedly, the 9-axle chassis was developed in the PRC and transferred the documentation to the DPRK, which changed the project and mastered production. In this regard, it is possible that the new extended chassis is also of imported origin.

Official Pyongyang has not yet announced the testing of a new ICBM. The armed forces of foreign countries monitoring the activity of North Korea also did not record such events. News recently affected only missiles of previous models. How soon the flight tests of the new ICBM will begin is unknown. However, it can be assumed that the KPA Strategic Missile Forces will not pull, and after the display of the complex will demonstrate the rocket in action.

Tests may take several years, after which the DPRK will adopt a new PGRK into service. Its appearance in the army will significantly affect the strategic potential, which by that time will be based on two types of Hwaseong ICBMs and submarine ballistic missiles. Moreover, it is the promising missile that will become the most powerful and dangerous in North Korea's nuclear arsenal.

New land-based missiles with a range of at least 10 thousand km are becoming a serious military-political tool. Such weapon able to control the entire Asia-Pacific region and even threaten targets in the continental United States or Europe. Such a military-political argument, put on alert, will have to be taken into account when making any decisions and conducting any negotiations. In addition, the development of SLBMs is underway, which will also become an important component of the strategic deterrence system. 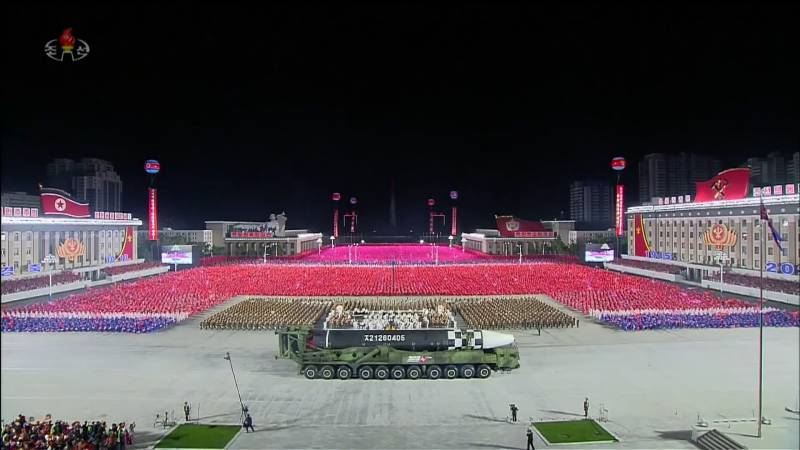 Obviously, the new missile will not go unnoticed by foreign countries. Foreign media have already published publications about the dangers of the new PGRK and the need to take certain measures against Pyongyang. How events will develop - time will tell.

According to the results of the parade

At the recent parade, the DPRK showed a lot of new samples that are of great interest from technical and other points of view. The most important novelty can be considered precisely the promising mobile ground-based missile system with increased characteristics. It has not yet entered service, but it could happen in just a few years - and change the strategic capabilities of the Korean People's Army.

The purpose of the parade is to demonstrate the achievements of the defense industry and the army. In this context, ballistic missiles are almost the main participants in the event. In addition, the parade shows the potential enemy the potential of the armed forces, and the new PGRK has already coped with this task.