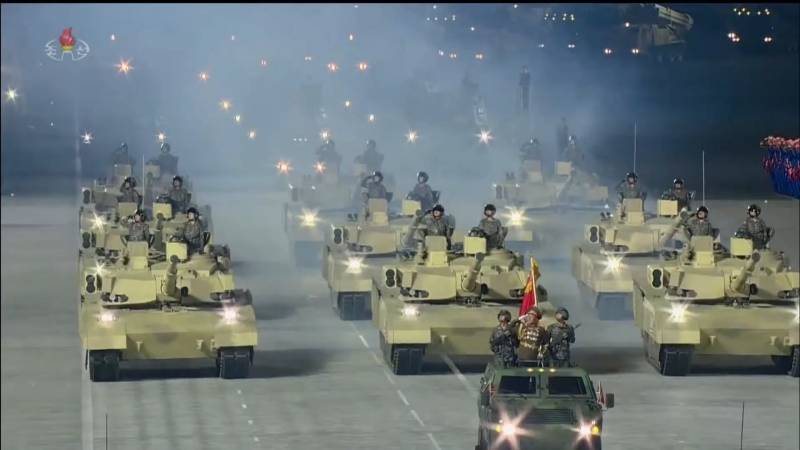 On October 10, Pyongyang hosted a military parade dedicated to the 75th anniversary of the Workers' Party of Korea. This event, like all previous parades, once again became a platform for the first demonstration of several new types of weapons and equipment. One of the new products is a promising main battle tank. The appearance of this machine speaks of the application of the most modern ideas and the latest developments.

The DPRK follows its own traditions. New samples are openly shown at parades, but no details were given. Moreover, even the name remains unknown. tank... However, there is an opportunity to consider new armored vehicles and even draw some conclusions.

The North Korean industry has been developing its own MBTs over the past several decades. At the same time, as far as is known, she does not yet have the experience of fully developing tanks from scratch. All known projects were to one degree or another based on foreign models, although the latter provide for a major change in the original designs. The base for this evolution was the Soviet T-62 medium tank.

The new MBT has a modern appearance, but some structural elements show the origin of the vehicle from older models. All this speaks about the continuation of the development of existing designs by combining the mastered developments and completely new ideas. At the same time, characteristic North Korean concepts were also implemented, which distinguish the DPRK tanks from foreign ones. As a result, a rather interesting armored vehicle appeared, not devoid of prospects. 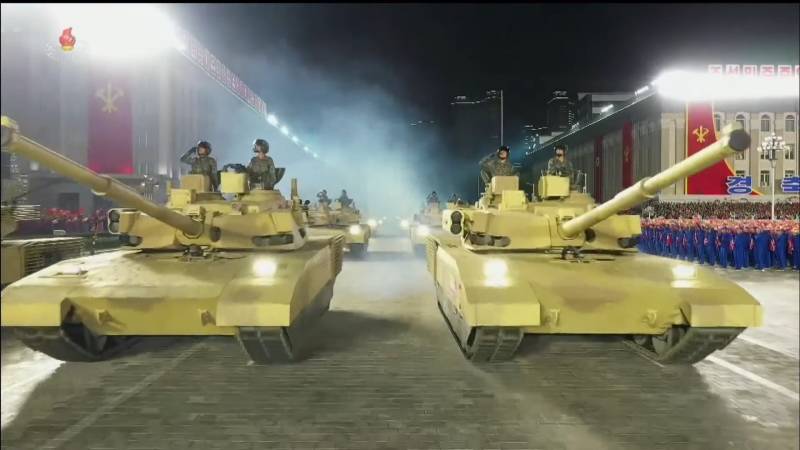 Some media outlets compare the new North Korean tank with the Russian T-14 - they pay attention to some elements of the tower and other features. However, a detailed study shows that the DPRK MBT belongs to the previous generation and can hardly be compared with the "Armata".

A characteristic feature of the latest North Korean tanks is the use of an elongated chassis. The new MBT is no exception. It receives a hull of a traditional layout with an aft engine compartment. Due to the overall length of the car, a seven-wheel chassis is used, probably with a torsion bar suspension. The parameters of the power plant are unknown. It is possible to use the developments of the Songun-915 project - this tank was equipped with a 1200-horsepower diesel engine.

The appearance of the MBT shows that one of the main goals of the project was to increase protection. This noticeably affected the appearance of the chassis and changed the contours of the turret. So, the frontal and side projections of the hull are closed by overhead and / or integrated elements. Metal armor and reactive armor are probably used. The hull stern was covered with lattice screens.

The tower is made by processing one of the old samples and has rounded contours in the base. At the same time, it was supplemented with a number of overhead and hinged elements. So, on the sides of the gun mask, frontal armored units appeared, resembling the armor of the American OB M1. The sides are reinforced and a stern box or niche is provided. A fairly thick overhead plate appeared on the roof of the tower. 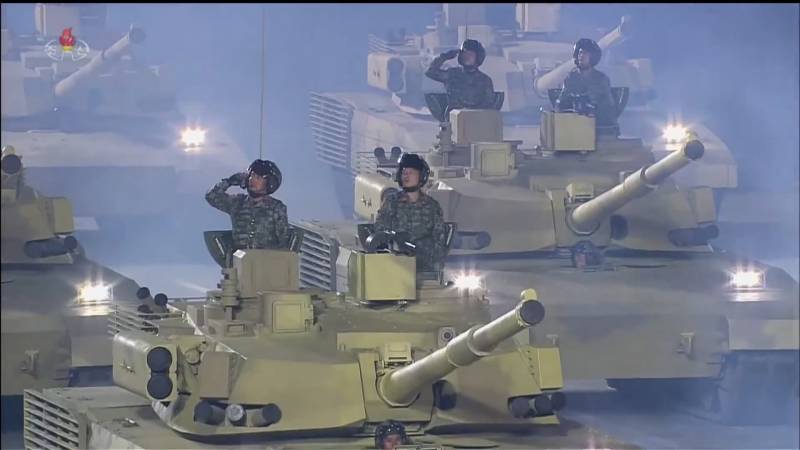 Taking into account modern trends, an active protection complex has been introduced. There are four blocks along the perimeter of the tower, which can be considered KAZ radar equipment. On the forehead and sides of the tower there are launchers of protective ammunition - four blocks of three each. Smoke grenade launchers are provided near the stern. Also, new means of protection include laser radiation sensors.

In terms of proportions and dimensions, the new MBT is similar to the Songun-915, developed at the end of the 62s. This vehicle was larger than the T-44 and its derivatives, and its combat mass exceeded 45-XNUMX tons. Probably, the newest tank could retain some of the features of its predecessor and receive separate units from it, such as an engine.

The new MBT weapons complex combines modern components and a specific North Korean approach to the choice of weapons. In this case, we can talk about a serious revision of the main design features. In particular, it can be concluded that the fighting compartment will be rearranged with the transfer of crew jobs.

The "main caliber" of the tank is still a smooth-bore gun of an unknown caliber - 115 or 125 mm (the DPRK has both types of systems in service). The gun is equipped with a barrel bend sensor and, apparently, does not have an automatic loader. The gun cannot use tank guided missiles, which is why two of these products are on a separate launcher on the right side of the turret. Instead of an anti-aircraft machine gun on the roof, the tank carries an automatic grenade launcher. 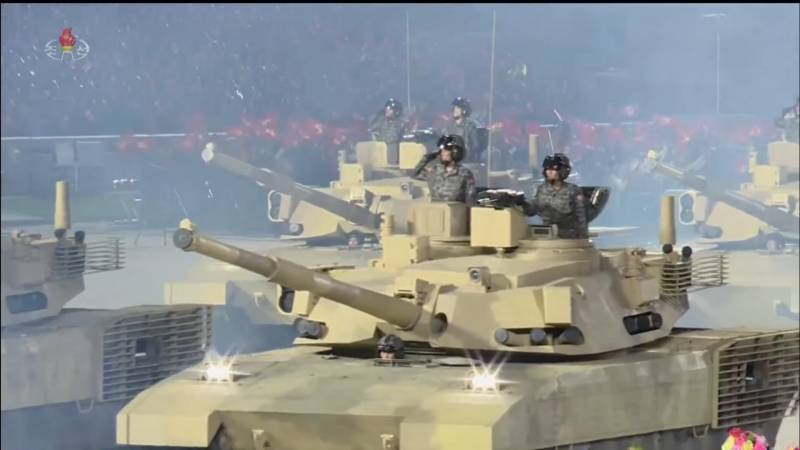 The machine has all the necessary optical and optical-electronic means. In front of the roof hatches there is a fixed gunner's sight and a panoramic commander's sight. Weather sensors are also installed on the tower. The exact composition of the fire control system is unknown, but one can assume a sharp increase in its characteristics in comparison with its predecessors.

The location of the sights on the turret indicates the re-arrangement of the fighting compartment. In the previous DPRK tanks, the commander and gunner were located to the left of the gun, one after another, and the right half of the turret was given to the loader. The new vehicle uses a "mirror" layout with the gunner's and commander's seats on the starboard side.

At the training ground or in the army

The current status of the new project is not entirely clear. The DPRK traditionally does not disclose information about its new projects and rearmament processes, which is why only fragmentary data are available, which does not always correspond to the real state of affairs. All this makes it difficult to evaluate new projects.

Obviously, the promising MBT passed the technical design stage and, at least, went out for testing. At the parade, nine tanks were shown at once - these can be prototypes, pre-production equipment, or representatives of a full series already supplied to the troops. Most likely, in the coming years, official data on this matter will not appear and again will have to rely only on foreign sources. 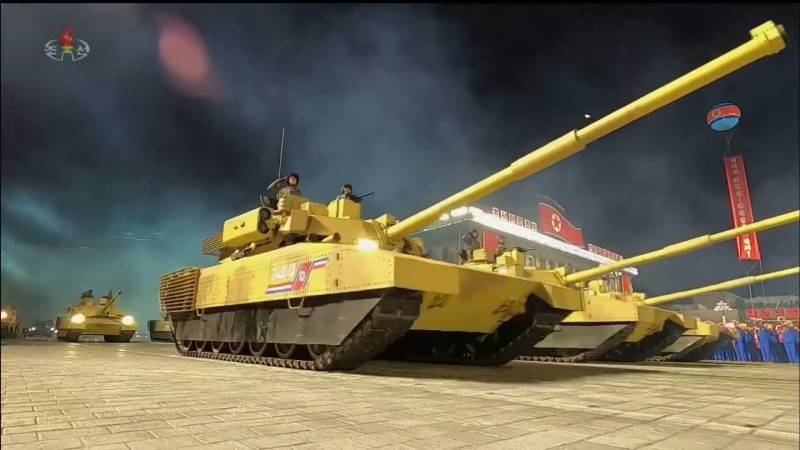 It is known that the DPRK industry is capable of producing tanks of its own design, incl. fairly advanced designs. At the same time, the pace of production is not always high and is limited by the complexity of the project. This allows us to assume that the new Korean MBT may go into production, but will not become truly massive. Accordingly, the army will have to operate the latest tanks in conjunction with long-obsolete models.

The recent "premiere" shows that North Korea maintains and develops its competencies in the field of tank building and is trying to catch up with the world leaders in the industry. Various limitations and difficulties still remain, but they are being overcome. How successful is unknown, but it is clear that every effort is being made for this.

The new MBT is still similar to the next version of the development and refinement of the original T-62, but the number of "inherited" features has been reduced. It is possible to use existing components, such as the original turret dome or 115-mm gun, but with the help of additional units they are improved, increasing the main characteristics.

The most important place in the new project is occupied by components and measures that meet modern requirements for MBT. Added additional protection for all projections, including active protection, improved OMS, etc. Nevertheless, the real characteristics of the resulting tank remain unknown, and so far we can speak of similarities with foreign models only at the concept level. 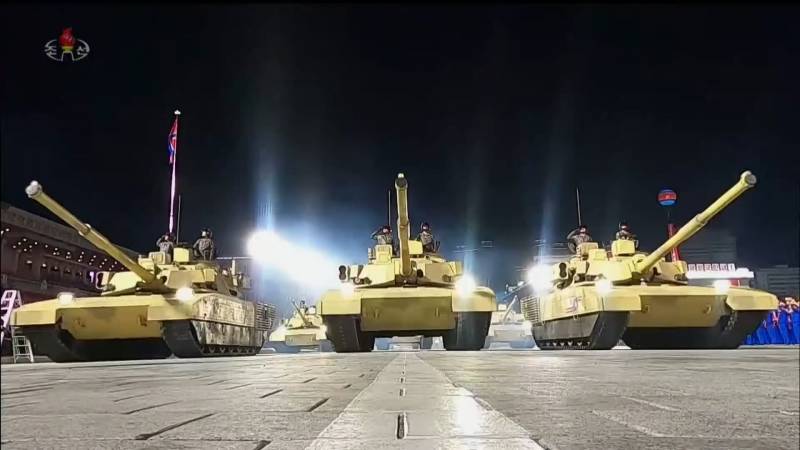 However, not all modern ideas are studied and mastered. So, North Korean tanks are still far from an uninhabited fighting compartment; they do not know the possibility of creating highly effective command and control systems, etc. All this so far does not allow the DPRK to claim leadership in world tank building.

It makes sense to compare the new North Korean tank with the existing models of the South Korean army. Apparently, this vehicle can on equal terms withstand the South Korean K1 and M48 tanks of all modifications. The ability to effectively deal with modern MBT K2 is questionable due to the significant difference in vehicle designs and capabilities.

In general, the new North Korean tank is of some interest. It shows what the defense industry of an isolated country is capable of, and what views on armored vehicles are common among the military and political leadership. Apparently, it considers tanks to be the main striking force of the army and demands to continue their development.

The industry, in turn, demonstrates its ability to carry out step-by-step evolution of armored vehicles, incl. by mastering the most modern solutions. In the future, this can lead to the formation of a full-fledged school of tank building and more interesting results. How soon this will happen is unknown. In the near future, the main task of the industry will be the rearmament of the army using the recently shown model.

Ctrl Enter
Noticed oshЫbku Highlight text and press. Ctrl + Enter
We are
Modernization of MBT with the aim of increasing their combat effectiveness in urban environmentsIs the "old" well forgotten to become the "new"? Part-2. At the call of honor and duty
26 comments
Information
Dear reader, to leave comments on the publication, you must to register.