Can Cellini's Venus be faked? 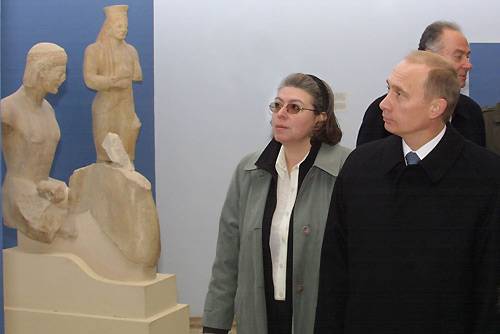 - How kind it was of Monsieur Van Gogh - to sign only with his name! For me, this is a time saver.
Papa Bonnet forging Van Gogh's signature. Comedy "How to Steal a Million"

Technologies historical science. There is probably no person in our country who has not seen this American comedy directed by William Wyler with the inimitable Audrey Hepburn and the charming Peter O'Toole in the lead roles. It is about the abduction from the museum of the marble statuette of Venus Cellini (the creation of Benvenuto Cellini), which was actually made by Bonnet's father from his grandmother, and, of course, even before she began to overeat at dinner. The intrigue revolves around the expert Dr. Bauer, who must authenticate Venus, the insurance for which is exactly one million dollars. And Bonnet's daughter, Nicole, explains to her dad that forgeries in sculpture do not work out, because there is such a thing as potassium-argon, with which they determine the age of the stone, the place where it was mined, and even the address of the sculptor who is the product sculpted. Then love intervenes and a lot of interesting things happen. However, this is a movie. And cinema is cinema! But how, in reality, modern scientists determine whether this or that marble artifact is genuine, or is it nothing more than a well-made fake? This is what our story will go on today, and in order for it not to be too academic and boring, it will be illustrated by shots from the movie How to Steal a Million and photographs of kuros from the most famous museums in the world. 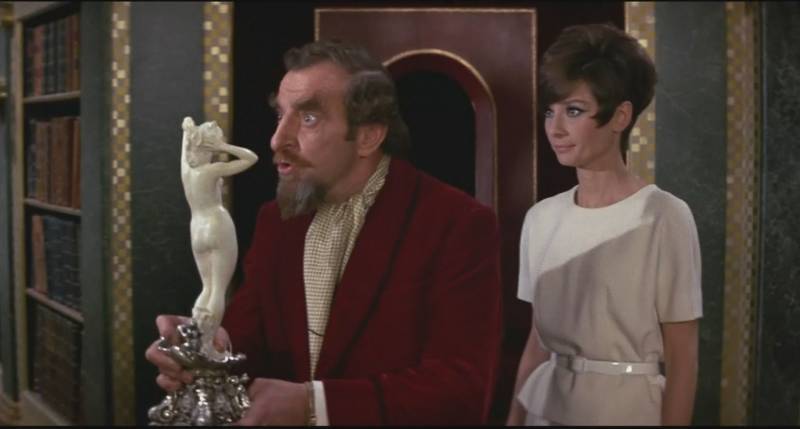 Here she is, Venus Cellini from the movie. True, he did not really create such a sculpture, but this is a film ...
As an example of such work, we will take a real case that occurred back in 1984. One could find more modern examples, but here it is important to show how this was done even then. Because today science has gone even further.

That year, the J. Paul Getty Museum in Malibu, California, was offered to buy an antique statue of a young athlete (kouros) made of marble. The statue was more than two meters high and is perfectly preserved, despite the fact that it was more than 2500 years old. The problem arose due to the fact that art critics did not know it, as it was in one of the private collections in Sweden. The newspapers got to the bottom of the fact that for the kuros his owner requested from 8 to 12 million dollars, that is, an exceptionally large amount for a completely unknown statue. 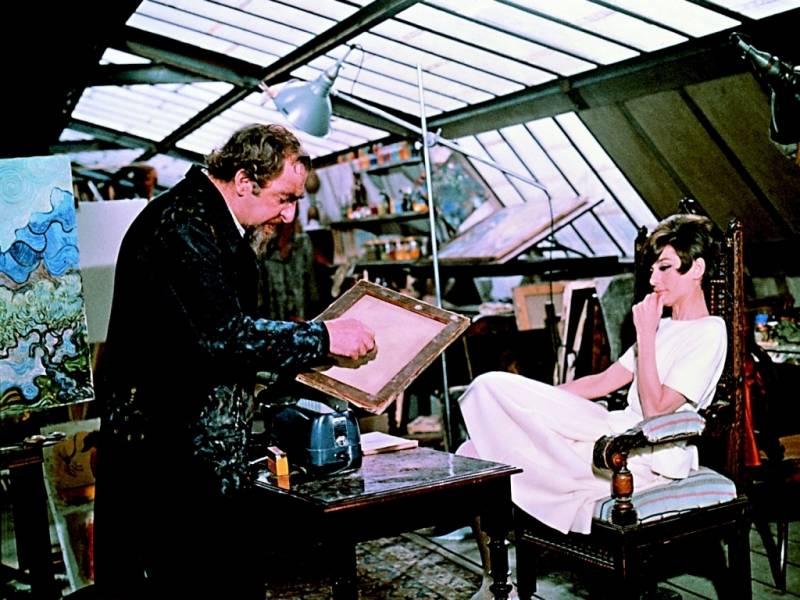 Papa Nicole erases the primer from the canvases of the late XNUMXth century in order to apply it later to his canvases and says that without this there is no scent of authenticity ...
- I do not think that Van Gogh his paintings were worth such hard work.
- So he was Van Gogh.
- All this is true, but it is known that in his entire life he sold only one painting. And your father, to perpetuate his tragic genius, has already sold two
Marion Tru, curator of the museum of the department of antiquities, invited art critics to see it, and most of them considered it genuine. But there were those who doubted its authenticity, motivating their opinion by the fact that the statue has stylistic deviations from all known samples. And something really well preserved! Then she was examined in ultraviolet rays, which made it possible to find more suspicious features. Usually, ancient marble products in ultraviolet light have an amber tint with some purple blotches. While this figure had a shade of light purple, usually characteristic of modern pieces. Naturally, no one was going to pay millions for a fake, so the workers turned to scientists. 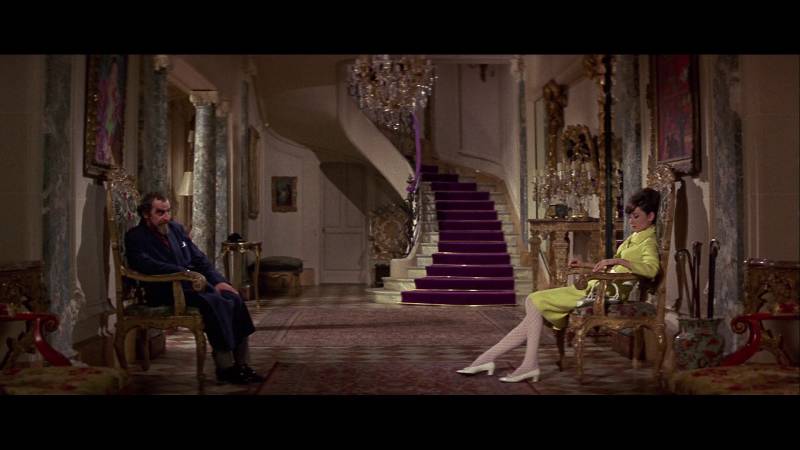 Dr. Bauer is coming, and Papa Bonnet just got insurance for his Venus. Now the deception will definitely be revealed and there will be an unheard of scandal!
Stanley V. Margolis was invited, who has been doing research for over a year. Moreover, he was even allowed to drill a core from the statue in order to take small samples of stone for analysis. Until then, none of the marble sculptures had been subjected to such a scrupulous scientific analysis, but today such scientific methods of identifying the authenticity of marble sculptures are used in all major museums in the world. 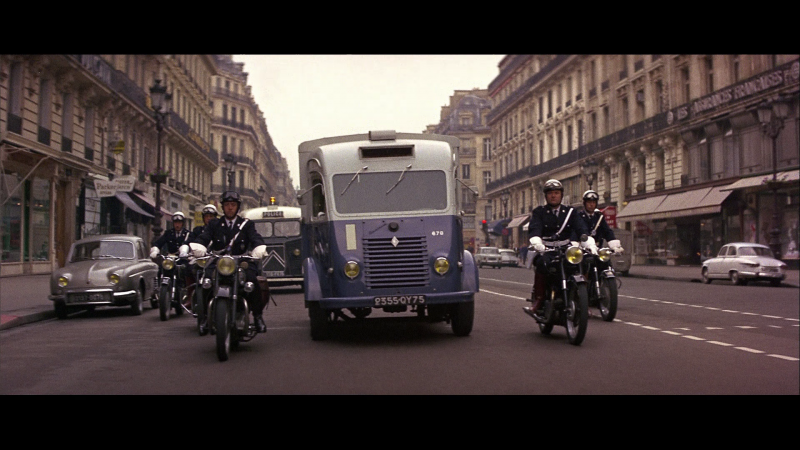 Meanwhile, Venus, guarded by the police, is being taken to an exhibition in a museum!
Prior to this, experts studied the style of the sculpture and used the method of comparative iconography to distinguish the fake artifact from the original. Well, the age of the sculpture was judged by its surface layer, the so-called patina. Moreover, marble turned out to be very resistant to weathering, so that traces of aging and environmental impact on it with the naked eye are impossible. However, the demand for "antiques" over time led to the fact that fake sculptures began to be buried in the pasture where cows were grazing, and also to specially age their surfaces with acid vapors. 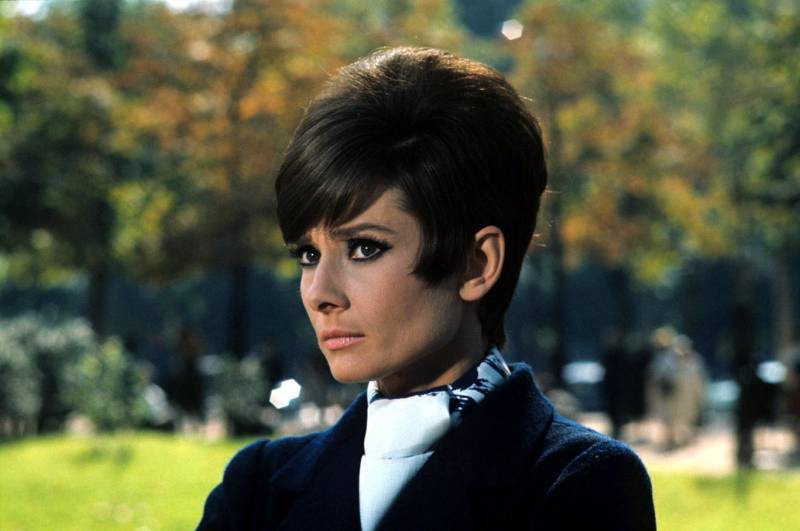 Nicole is lost in thought. However, even a frown suits her, and it is no wonder that Simon Dermot falls head over heels in love with her ...
- Why do you want to steal this particular figurine?
“Don't you think that I can steal something from someone else?
- I lost sight of that. Maybe we can steal her when she gets home?
At the same time, geochemists have a wealth of experience in studying the properties of marble and rocks such as limestone, which, as you know, under the influence of high temperatures and pressure, turns into marble. Thanks to the study of rocks extracted by drilling from the bottom of the ocean, it was possible to date the ice ages, and much to learn for the reconstruction of those natural conditions under which, for example, the extinction of dinosaurs occurred on our planet. 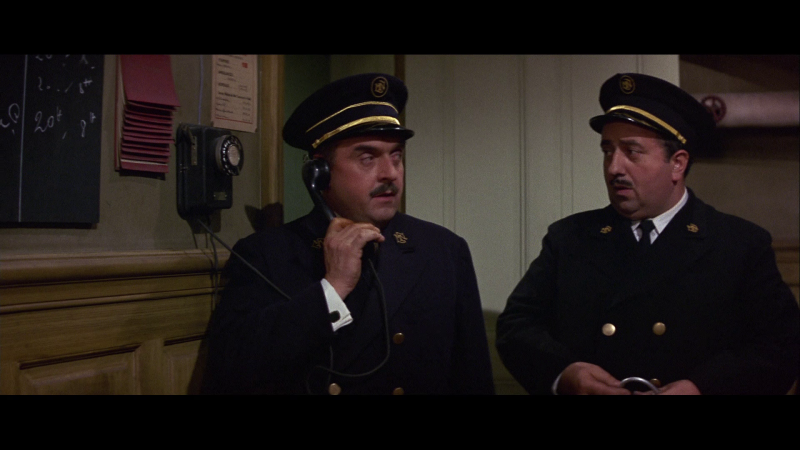 The security problem is always the same. Her vigilance dulls over time ...
There are many types of analyzes that allow you to "talk" even the most "silent" stone. For example, the ratios of stable isotopes of carbon and oxygen in marble and limestone samples have been found to vary depending on their origin. Isotope analysis makes it possible to identify changes due to weathering or burial in the soil. Microscopic analysis of a piece of marble in polarized light reveals irregularities in its structure, and by measuring the wavelength of X-rays emitted by samples during irradiation, one can easily determine even the smallest concentrations of impurity elements in them. That is why, by the way, after 1945 it became extremely problematic to use stone from quarries, as well as wood and paper for counterfeiting ... Since then, a lot of all radioactive rubbish has got into the atmosphere, and it is very easy to fix all these man-made elements. 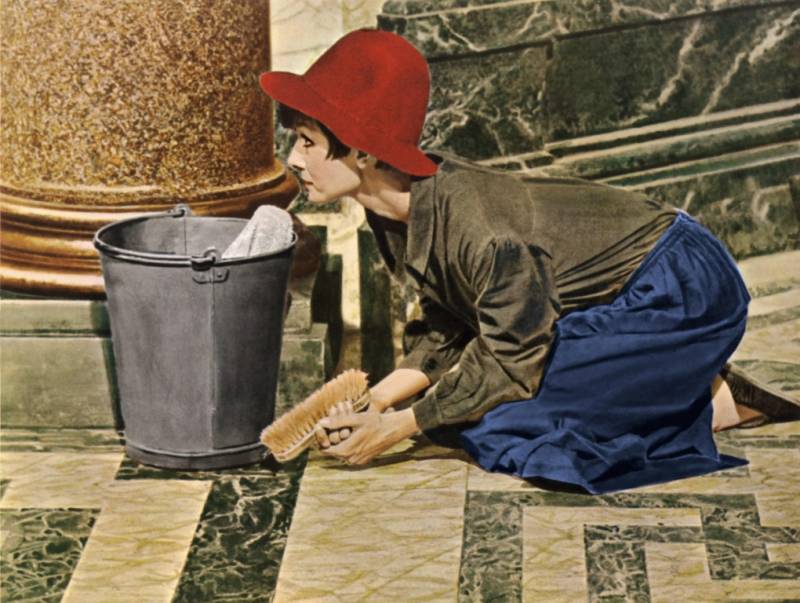 Who would have thought that the thief of the sculpture is this cleaning lady ?!
The Kuros in question was hewn out of dolomite, a highly resistant type of marble, circa 540 and 520. BC e. The statue itself consisted of seven parts and was 206 cm high.

With the permission of the owner, they drilled a column with a diameter of 1 cm and a length of 2 cm below the right knee, where a small crack had formed in ancient times. The column was cut into thin layers and they began to be examined through an electron microscope. Other samples were taken using a mass spectrometer. X-ray diffraction and fluorescence methods were also used to determine the content of impurities and foreign inclusions in them. 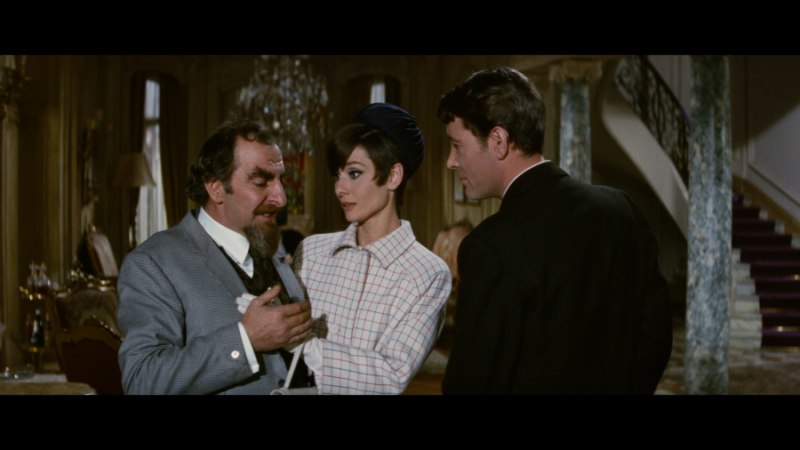 Simon Dermon guides daddy Bonnet on the right path:
- A phenomenally capable boy! He set me so firmly on the true path that I can neither get lost nor come back
First of all, it turned out that the marble from which the kouros was made is practically pure dolomite (or calcium-magnesium carbonate), that is, a rarer variety of marble than marble, which consists of calcite (calcium carbonate). It is both more durable and resistant to weathering, as a result of which this statue, apparently, is so well preserved. 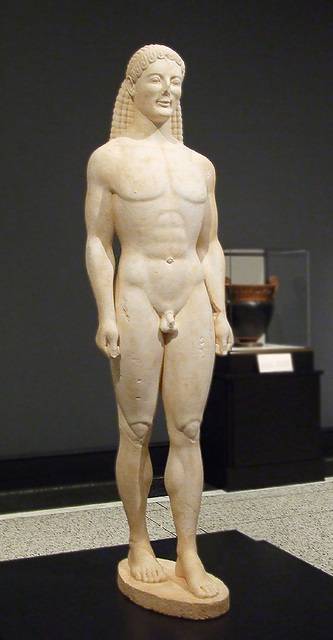 And this is exactly the same kouros from the Paul Getty Museum in question. By the way, what are kuros in general? These are figures of naked youths with a smile on their lips and in static poses, characteristic of Greek sculpture from the period 650-500. BC. Barks, similar to female sculptures, have always been depicted wearing folded chitons
By chemical composition, it was possible to find the place where this marble was mined: the ancient quarries at Cape Vafi on the island of Thasos, the oldest among those where dolomite marble was mined from time immemorial. Well, historians, as it turned out, knew that it was on the island of Thasos that the production of large kouros was located. That's just the question of authenticity, this did not solve, because marble on this very island is mined to this day.

Then the surface of the statue was examined under a strong optical microscope and it was found that it was covered with a thin layer of brown patina, consisting of iron oxides, clay-soil minerals and even inclusions of manganese oxides. In addition, the most weathered surface of the kouros was covered with calcite 10-50 µm thick. The research was carried out at the University of California, but then replicated at the Institute for the Conservation of Cultural Monuments at Marina del Rey in Los Angeles. 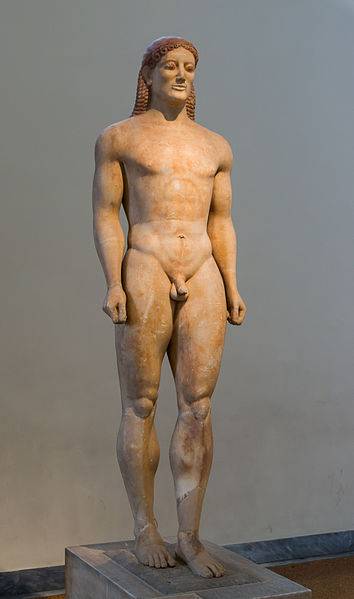 Kouros from the National Archaeological Museum in Athens. Height 1,94 m.Approx. 530 BC
And this was the main argument in the question of the antiquity of the statue. Even in a modern laboratory, turning dolomite particles into calcite on the surface of a two-meter statue is completely unthinkable. In addition, such elements as strontium, manganese, etc. would have been found in the "fresh" dolomite and calcite layer. And they were in the calcite layer, but completely absent in the dolomite layer! That is, it was proved that the calcite layer on the statue was formed naturally. 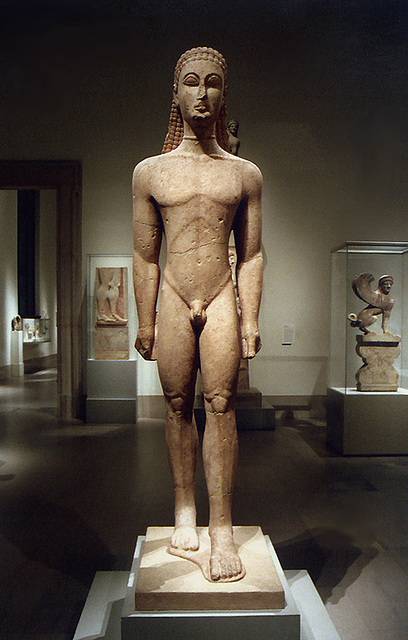 Kuros from the Metropolitan Museum of Art in New York
Based on these data, the scientists concluded that the calcite layer on the museum of interest to the kouros was the result of weathering that the statue had been exposed to for many, many centuries.

However, the staff of the Getty Museum found all this a little and they made a detailed comparison of the statue with 200 other statues of the kouros that have come down to us in whole or in part, and it also confirmed its antiquity. So, after 14 months of painstaking research, the authenticity of the kouros was proven. The museum has finally decided to buy it. Already in the fall of 1986, it was exhibited in a museum, and it was protected from tremors by a complex system of cables and springs made, moreover, of stainless steel. 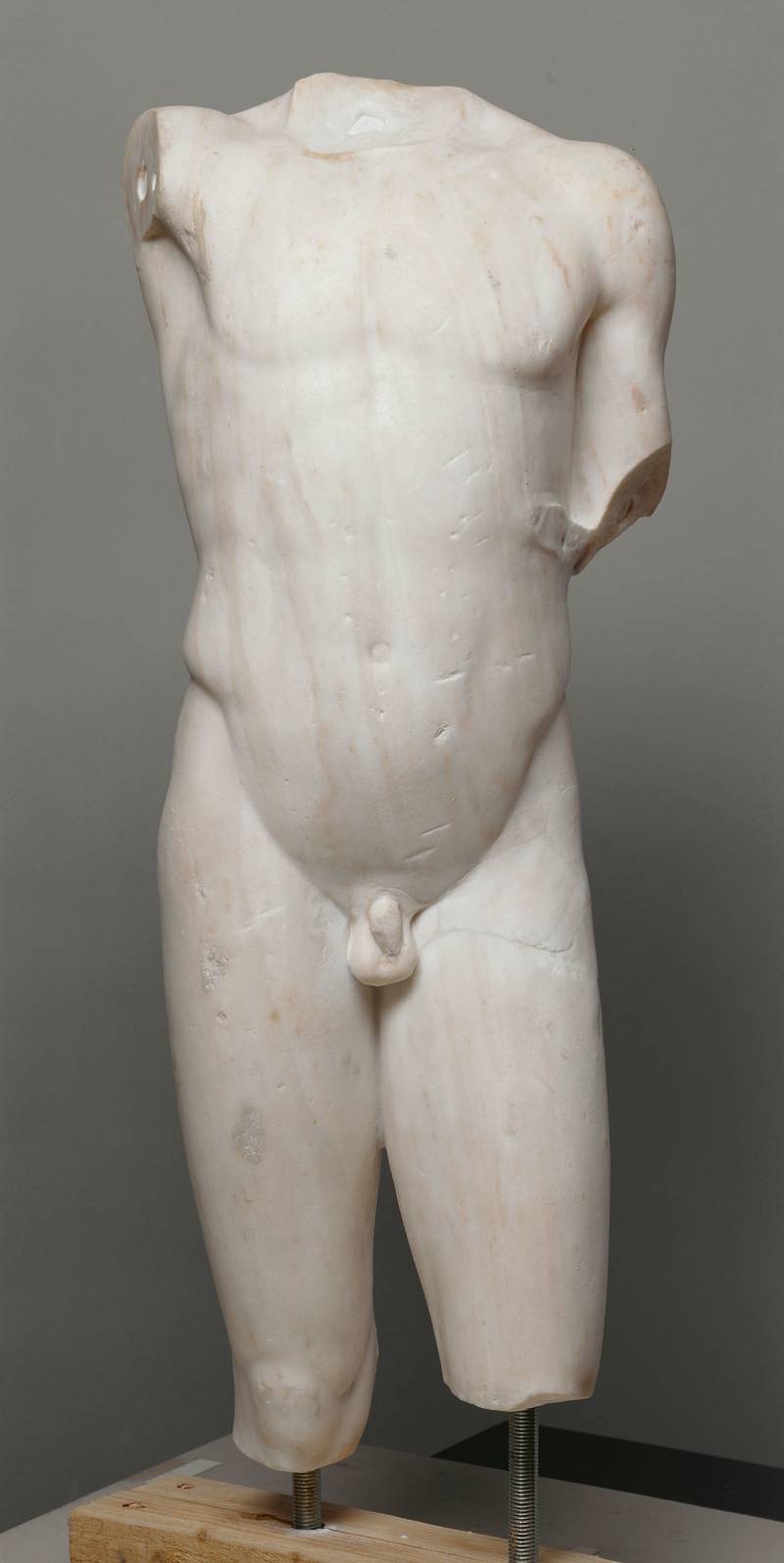 Marble statue from the Kunstmuseum in Vienna. Now there is no longer any problem in order to establish the authenticity of this artifact!
Well, today, for a successful analysis of antique marble sculptures, just a pinhead sample taken from a place on the sculpture where the most sophisticated connoisseur of this "withdrawal" will not even notice is enough.

Ctrl Enter
Noticed oshЫbku Highlight text and press. Ctrl + Enter
We are
Genuine armor and fake armorFather told
130 comments
Information
Dear reader, to leave comments on the publication, you must to register.