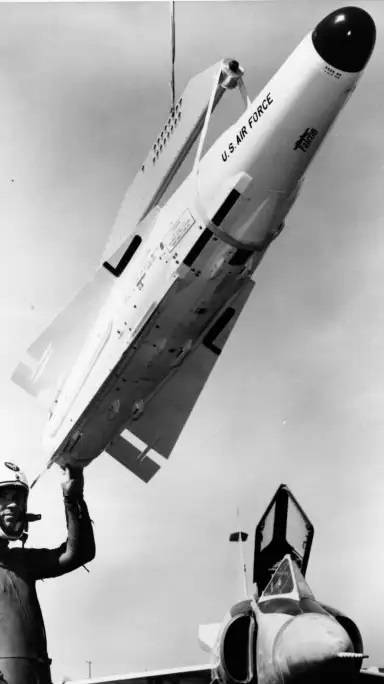 In the mid-fifties, in the interests of the US Air Force, the development of air-to-air missiles with a nuclear warhead began. The first example of this kind was the AIR-2 Genie unguided missile - a powerful warhead was supposed to compensate for its low accuracy. Soon, the development of a full-fledged guided missile with similar combat equipment began. Such weapon managed to create only on the second attempt, and the finished sample remained in stories under the names GAR-11 and AIM-26.

The need to create a guided air-to-air missile with the power of the AIR-2 became evident already in the mid-fifties. In 1956, Hughes Electronics received an order to develop such a weapon. According to the terms of reference, the new missile was supposed to ensure the defeat of enemy bombers on catch-up and collision courses, as well as carry a relatively powerful nuclear warhead.

Initially, the new weapon was proposed to be made on the basis of the already existing air-to-air missile GAR-1/2 Falcon, and it was about two projects at once. The unified XGAR-5 and XGAR-6 missiles had to differ in guidance means. In the first case, a passive radar seeker was used, in the second, an infrared one. 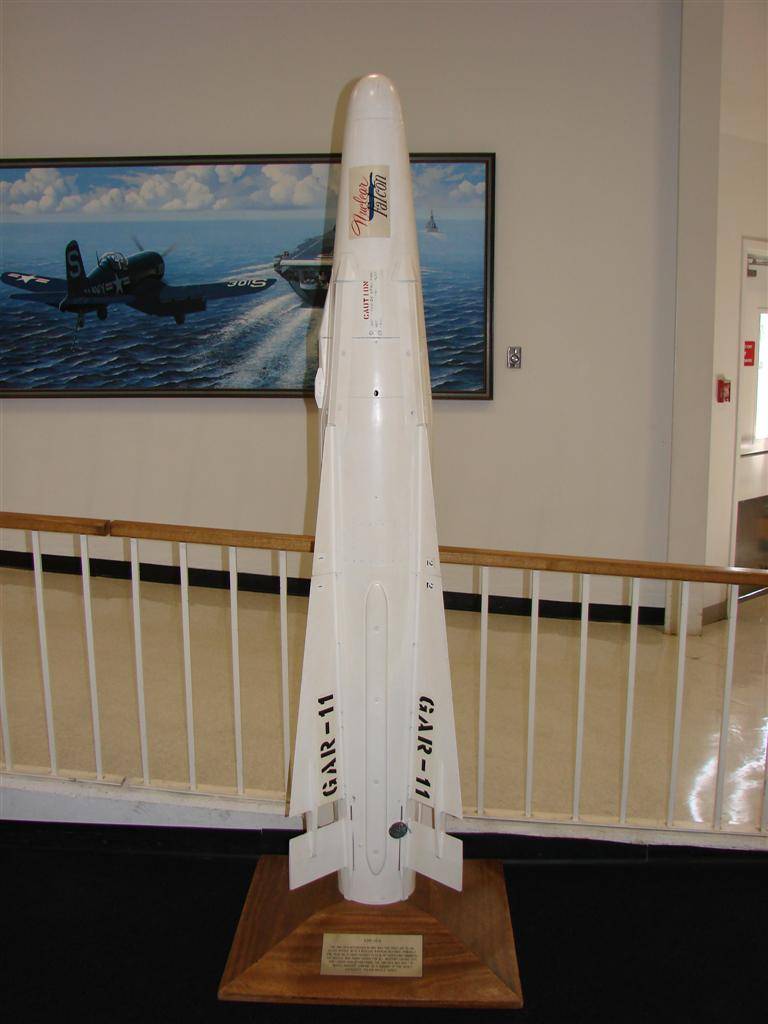 A rocket as a museum piece. Photo Wikimedia Commons
Due to the specific requirements of the XGAR-5 and XGAR-6 missiles, they had to differ from the base Falcon in their dimensions. The length of the hulls had to be increased to 3,5 m, the diameter - to 300 mm. This increased the available volumes, but did not lead to the desired results. At that time, the United States did not have nuclear warheads that could even fit into such a rocket body.

The lack of a suitable warhead and the impossibility of further increasing the airframe, threatening an unacceptable increase in the mass of the rocket, led to the abandonment of the project. Already in 1956, the development of the XGAR-5/6 was curtailed, and for the next few years the AIR-2 missiles remained the only special means in the arsenal of US fighters. Guided weapons of this kind had to be forgotten for a while.

In the second half of the fifties, nuclear technology made a big step forward, one of the results of which was a reduction in the size of ammunition. New samples of special warheads could fit into the limitations of promising missiles. Thanks to this, in 1959 they returned to the idea of ​​a guided missile. The development of a new sample with the designation GAR-11 Falcon was again ordered by Hughes.

In the late fifties, the W54 low-yield nuclear warhead was created. It was distinguished by its small dimensions, which reduced the requirements for the carrier. In particular, thanks to this, it was possible to abandon the previously developed long body, as well as widely use ready-made components borrowed from the serial Falcon missiles. 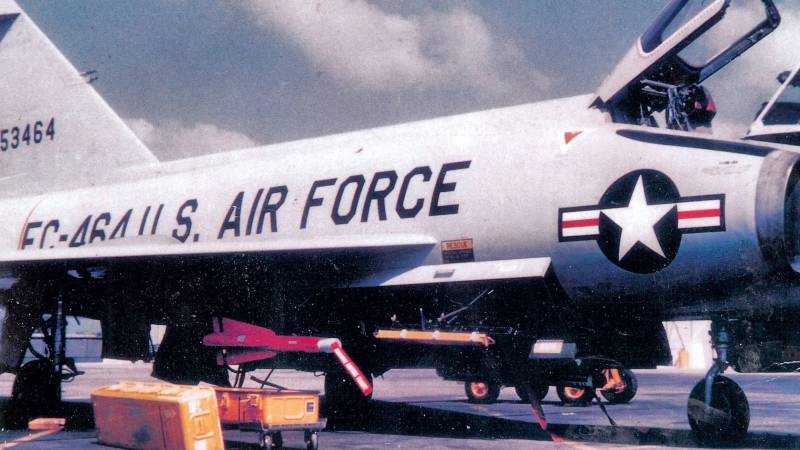 Nuclear missile on the suspension of the F-102 fighter. Photo by US Air Force
For the GAR-11 rocket, a new body with a conical head and a cylindrical main compartment was developed. The aerodynamic design was the same as the Falcon product. There were triangular X-shaped wings and a similar set of rudders in the tail. The head of the rocket contained the seeker, behind it was the warhead. The central and tail compartments were given under the engine. The rocket had a length of 2,14 m with a diameter of 279 mm. Wingspan - 620 mm. Weight - 92 kg.

According to the terms of reference, the rocket was supposed to hit targets on a catch-up and collision course. The latter requirement excluded the possibility of using the existing IKGSN, which did not differ in high performance. As a result, the GAR-11 rocket received a semi-active RGSN from the GAR-2 Falcon.

The rocket was equipped with a Thiokol M60 solid-fuel engine with a thrust of 2630 kgf. He was supposed to accelerate the rocket to speeds of the order of 2M and provide a flight at a distance of up to 16 km.

It was proposed to defeat the target using a low-power (0,25 kt) nuclear warhead of the W54 type. This product had a diameter of 273 mm and a length of approx. 400 mm. Weight - 23 kg. The detonation was carried out by a non-contact radio fuse. According to the main ideas of the project, a nuclear explosion was supposed to be guaranteed to destroy air targets within a radius of tens of meters and cause serious damage to objects at a greater distance. All this made it possible to compensate for the low accuracy of guidance with the help of the existing seeker. 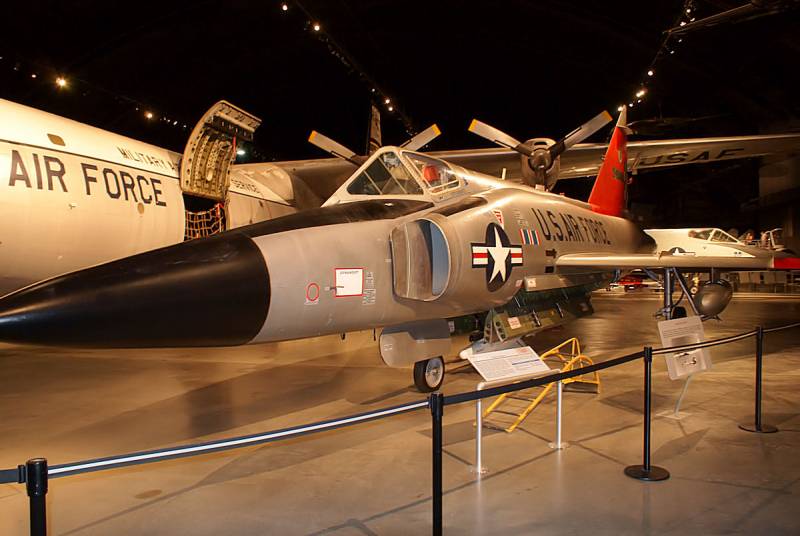 F-102 in the museum. AIM-26 missiles are visible under the bottom. Photo Wikimedia Commons
In the event of the use of weapons over its territory, as well as for export deliveries, a conventional version of the rocket called the GAR-11A was developed. It was distinguished by the use of a high-explosive fragmentation warhead weighing 19 kg. Otherwise, the two missiles of the two modifications were identical.

The Convair F-11 Delta Dagger fighter-interceptor was considered as the main carrier of the GAR-102 missiles. He could carry one such missile and deliver it to the launch line at a distance of 600 km from the base. By the end of the fifties, the F-102 had become widespread in the US Air Force, which made it possible to use new missiles to cover all major areas. In the future, the possibility of integrating the GAR-11 into the ammunition load of other interceptors was not ruled out.

Testing and operation
The widespread use of ready-made components and the absence of the need for the development of new complex components made it possible to complete the project in the shortest possible time, and already in 1960 the prototypes were tested. Throwing, ballistic and flight tests were successful. Missiles with a real warhead and a nuclear explosion were not launched. 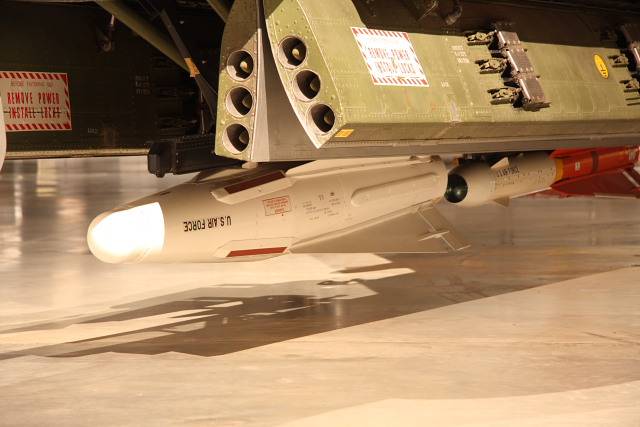 Cargo bay doors and missiles close-up. Photo Wikimedia Commons
In 1961, the GAR-11 rocket was adopted and introduced into the ammunition load of the F-102 interceptors. The production of such products continued for about two years. The last missiles rolled off the assembly line in 1963. During this time, Hughes and its subcontractors managed to produce approx. 4 thousand missiles of two versions. Slightly less than half of the products carried warheads of the W54 type.

In 1963, the US Air Force adopted a new weapon designation system. According to the new nomenclature, the GAR-11 missile with a nuclear warhead was now called the AIM-26A Falcon. The conventional version was renamed AIM-26B. These names were used until the end of operation.

The main operator of the GAR-11 / AIM-26 missiles was the US Air Force, but two export contracts emerged in the sixties. A small number of American-made AIM-26B missiles were purchased by the Swiss Air Force. This weapon was intended for use by Mirage IIIS fighters.

The missiles interested Sweden, which expressed a desire to buy a license for their production. The AIM-26B project underwent some modifications in accordance with the capabilities of the Swedish industry, after which the missile was renamed Rb.27. She entered the ammunition of the Saab J-35 Draken aircraft. The Swedish Air Force continued to operate such missiles until 1998 - much longer than the United States. After that, part of the decommissioned "Draken" went to Finland, and together with weapons. 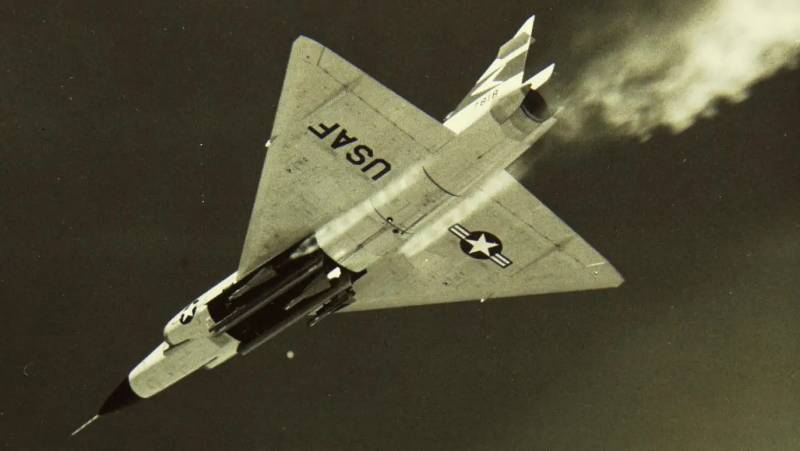 The GAR-11 / AIM-26 rocket was built on the basis of components from the late fifties, which is why it quickly faced the problem of obsolescence. The missile seeker did not have high performance, was vulnerable to interference and difficult to maintain. Electronics of that time did not ensure the defeat of low-altitude targets against the background of the earth. Also, the operation of missiles was hampered by the presence of a nuclear warhead. Finally, a launch range of no more than 16 km led to the risk of hitting the carrier aircraft.

Given the challenges of the future, back in 1963, the US Air Force Armaments Laboratory began developing a new ammunition to replace the AIM-26. The AIM-68 Big Q nuclear missile project yielded definite results, but it was never possible to bring it to series and put it into service. As a result, the Falcon rocket was left without a direct replacement. And soon it was decided to abandon the new nuclear air-to-air missiles.

By the end of the sixties, new air-to-air missiles with more advanced seeker of all types were created in the United States. They were devoid of the characteristic shortcomings of the AIM-26, although they were inferior to her in terms of warhead power. The new seeker systems ensured effective destruction of any targets in different conditions, and their accuracy made it possible to do without powerful warheads.

Thus, in a few years, the AIM-26 missiles have lost all their advantages. In 1970, the US Air Force launched a process to decommission such weapons, which took several years, and by the middle of the decade, fighters had switched to other missiles. The abandonment of nuclear weapons in favor of conventional weapons did not lead to losses in the combat effectiveness of the interceptors. 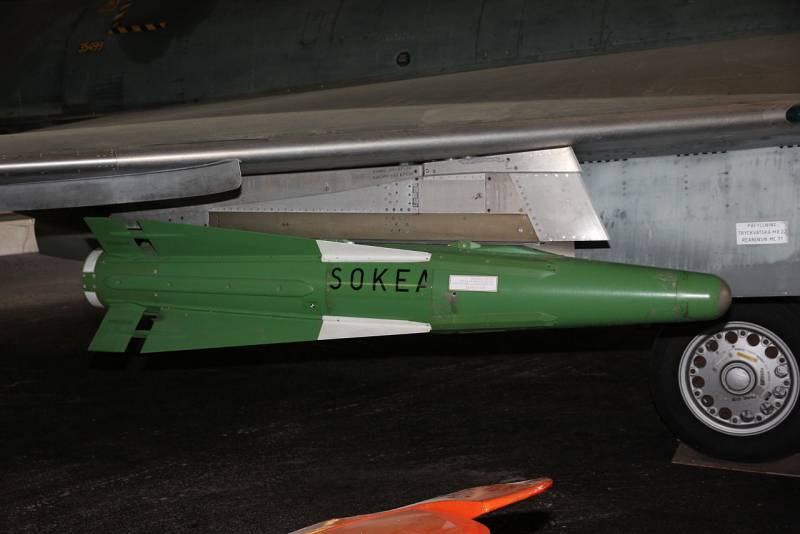 Swedish version of the American missile - Rb. 27. Photo Wikimedia Commons
The W26 warheads removed from the AIM-54A could still be used. In 1970-72. 300 of these products were modernized according to the W72 project with an increase in power to 0,6 kt. Such a warhead received a guided bomb AGM-62 Walleye in the Guided Weapon Mk 6. This weapon remained in arsenals until the end of the seventies.

The non-nuclear version of the Falcon rocket in the United States generally repeated the fate of the base product. However, foreign countries continued to operate such weapons longer than the US Air Force. Products AIM-26B / Rb.27 have been replaced with newer designs only in recent decades.

The last of its kind

In the fifties, the United States viewed nuclear missiles as a real element of air defense, capable of repelling an attack. fleet Soviet bombers. Until the end of the decade, it was possible to develop two samples of such weapons at once, guided and uncontrolled. Both of these products remained in service for several years and contributed to the country's defense.

However, the further development of the direction turned out to be associated with many difficulties and unnecessary expenses. In the sixties, an attempt was made to create a long-range air-to-air missile AIM-68 Big Q, but it did not give the desired results, as a result of which the entire direction was closed. As a result, the GAR-11 / AIM-26 was the first and last nuclear guided air-to-air missile adopted by the US Air Force.

Ctrl Enter
Noticed oshЫbku Highlight text and press. Ctrl + Enter
We are
Long-Liver A-26 "Inveider"An-12 in Afghanistan
14 comments
Information
Dear reader, to leave comments on the publication, you must to register.