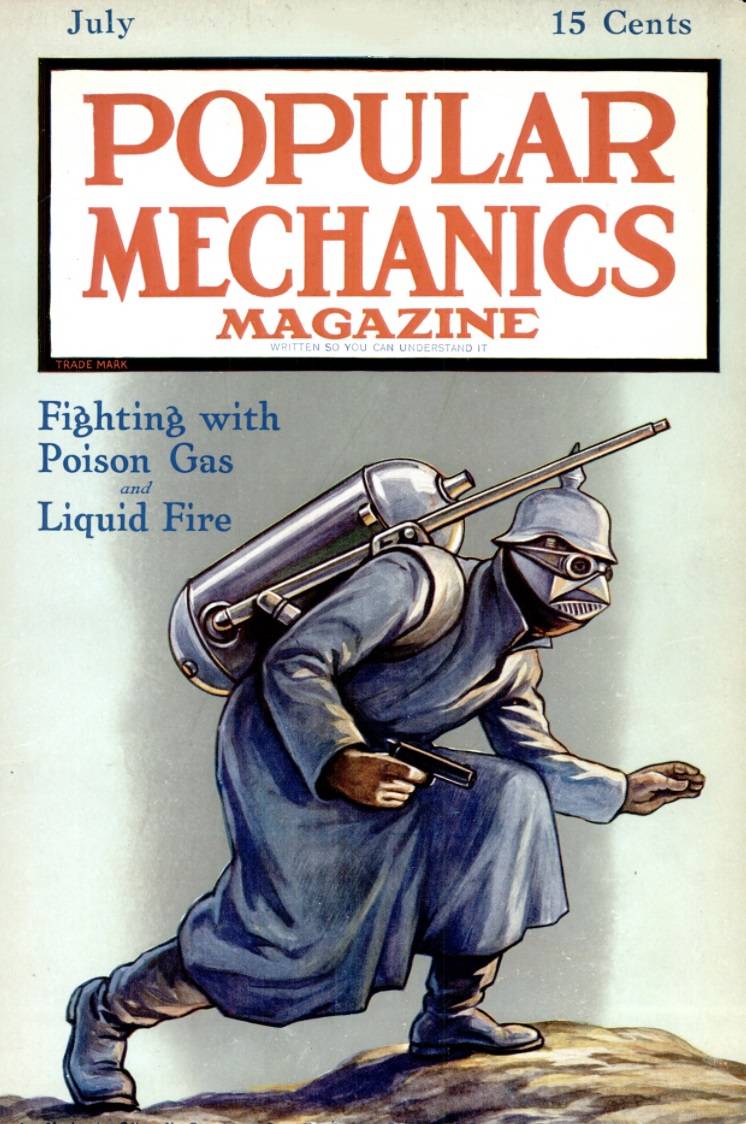 German flamethrower on the cover of the magazine

During the First World War, new types of weapons became widespread, which ultimately determined the appearance of battles. This progress in military affairs attracted the attention of the press. For example, in the July 1915 issue of the American magazine Popular Mechanics, there was an interesting article "Fire and Gas in World War" ("Fire and gas in the world war").

The primitive warrior, not intending to eat his victim, used poisoned arrows - but he could not teach the lessons of cruelty to modern armies. Now poisoned arrows are not used only due to obsolescence and insufficient lethality, which does not meet the requirements of the XNUMXth century.

To obtain new results in this area, chemistry was used. The armies began using poisonous gases and "liquid fire". Under favorable meteorological conditions, a cloud of a toxic substance several meters high is capable of covering enemy positions.

Whoever came up with the idea of ​​using poison gases, they are now used by all the warring parties. The Germans used the gases in a recent attack in the Ypres area in Belgium. In the Argonne Forest in France, both sides use chemicals whenever possible. According to press reports, the French gases do not cause irreparable harm to the enemy, but leave him unconscious for one to two hours.

Recent reports from reliable sources have included a French turpinite bomb. Considering moral issues, the best feature of this substance is its ability to kill instantly. The use of such ammunition can explain the recent successes of the Allies in Flanders. At the same time, for several weeks, the inhabitants of London fear a possible German attack with the use of gas bombs thrown from the Zeppellins.

The use of gases and flammable liquids is not the only departure from civilized warfare. So, the American company offers a special shell, called the most deadly among all existing. When such a projectile explodes, the fragments are covered with poison - and any scratch from them becomes fatal; the victim dies within a few hours.

It is impossible to estimate what the use of such weapons and how it will affect civilization. If we take into account modern views on moral issues and the norms of the adopted conventions, then all this looks like a return to the barbaric order. Thus, the Convention on the Laws and Customs of War on Land, adopted at the Second Hague Conference in 1907, prohibits the use of poisons or poisoned weapons, or the use of weapons that cause unnecessary suffering. 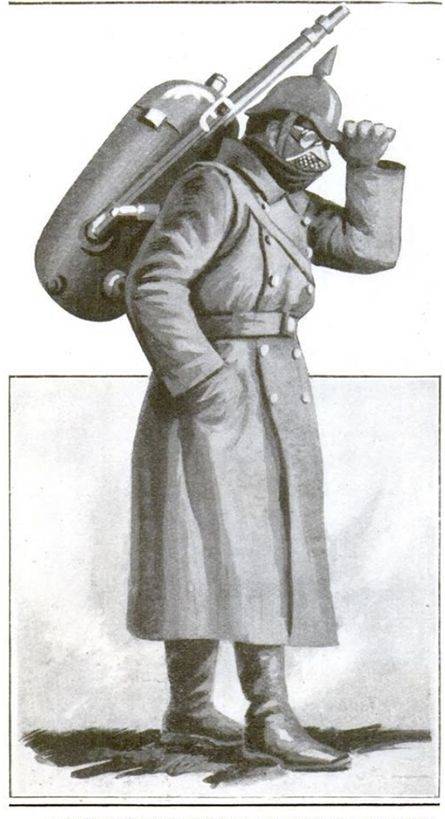 Civilized nations have hitherto taken the position that the incapacitation or killing of the enemy serves the achievement of necessary and legitimate goals. Obviously, the poisonous gases that cause anguish are a deterrent — an attempt to make war more terrifying and thereby affect the spirit of the enemy. However, this attempt turns out to be useless when it comes to the use of gases against the army. They respond to gas attacks with their own attacks.

Also, soldiers are protected from gases using respirators and masks of various types. It is likely that as a result of such processes, the army will become like a mine rescue team. Every French soldier in the Argonne Forest has his own felt mask that covers his nose and mouth. Inside the mask is a white powder that neutralizes German gas - it is believed to be chlorine. A soldier with such a mask is protected from the poisonous clouds coming from the German trenches.

France responds to such chemical weapons with its own developments. A few years ago, the French authorities were faced with the problem of criminals in cars, and military laboratories were ordered weapons that could neutralize the villain, but not harm him. It is reported that such bombs are now being used at the front. When the ammunition explodes, gas is released, causing increased lacrimation and scalding the throat. For an hour after that, the person remains helpless and almost blind, but after two hours everything passes.

The French use gas bombs and shells, while the Germans use a less effective gas attack. Moreover, German gas is more dangerous. Its exact composition is known only in Germany, but British experts who have seen the action of such weapons believe that it was chlorine. If this gas is inhaled in sufficient quantity, death is inevitable. Non-lethal doses lead to excruciating pain and leave almost no chance of recovery. To avoid being hit by their own gases, the Germans wear special protective helmets.

Finds application and "liquid fire". Such attacks are only possible from close range. A flamethrower soldier carries on his back a can of flammable liquid under pressure, a hose connected to a cannon pipe. When the valve is opened, the flammable liquid is ejected and ignited; she flies 10-30 yards.

In favorable conditions, such weapons can be effective and useful. The trenches of the belligerent armies are often separated by only 20-30 yards, and in the course of constant attacks and counterattacks, different sections of the same trench may belong to different forces. When performing a combat mission, the flamethrower runs the risk of falling under its own flame and getting fatal burns. For this reason, he is entitled to safety goggles and a fire-resistant mask covering the face and neck.

A look from the past

An article about "gas and fire" on the fronts of the First World War appeared in July 1915 - a year after the beginning of the war and several years before its end. By this time, new weapons and weapons had appeared on the battlefields, which seriously influenced the course of battles and the appearance of the war as a whole. At the same time, some new items have not yet appeared or have not had time to receive proper development.

Various means of protection against gases
An article from Popular Mechanics shows that in 1915, chemical weapons were still considered quite dangerous and effective, and both irritants and toxic substances were used on the front. However, in parallel, there was a development of means of protection against them. Then it was assumed that they would not only allow to fight in conditions of chemical contamination, but also seriously change the appearance of the army. Conclusions were also made about jet-type flamethrowers. They were considered useful weapons, but not without a number of disadvantages.

Against the background of the general features of the First World War, discussions about civilized and barbaric methods of war look very specific. Also noteworthy is the proposal to create a projectile with poisoned fragments - fortunately, remained without practical implementation. Separately, it is worth noting information about the poisonous substance "turpinit", which at one time was reported only by German sources. It is believed that such a gas never existed, and rumors about it are associated with a misinterpretation of real facts.

In 1915, an American magazine could not know how events would develop in the future. Popular Mechanics wrote that France uses gas shells and bombs, while Germany is limited to balloon attacks. Subsequently, all parties to the conflict mastered all methods of using toxic substances and actively used them until the very end of the war.

The general prospects for chemical warfare agents also remained unknown. Already during the war, work began in different countries to create means and methods of protection, which seriously affected the potential effectiveness of such weapons. As a consequence, in the conflicts of the coming decades, chemicals were used sparingly, in limited quantities and without significant effect.

During the First World War, jet flamethrowers were considered modern and effective weapons, but with some drawbacks. In the future, despite all the efforts, the gunsmiths failed to get rid of the inherent problems of such systems. They found application in the future, but by the middle of the century they began to leave the armies due to limited benefits and excessive risks. It is unlikely that such a development of events was obvious in 1915, when the flamethrower was one of the most terrible weapons.

On the whole, the article "Fire and Gas in World War" from a magazine from the still neutral USA looked quite interesting and objective (by the standards of mid-1915). But nevertheless, taking into account the modern "after-message", such publications do not look detailed enough or objective. At the same time, they perfectly show what opinions and moods took place in the past, when the world war was gaining momentum and showed more and more horrors.