The English Massacre: Cavaliers vs. Roundheads 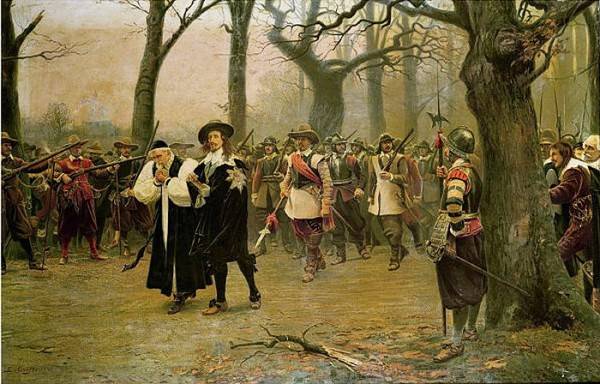 Charles I going to be executed. Croft's painting

The Second Civil War in England was even more brutal than the first. Cromwell stated that the reason for the war was “leniency” towards opponents after victory. Victory in the first war shows that God supports the Puritans. So this is a rebellion against God. The troops were ordered to "take revenge".

After the elimination of the Earl of Stafford and the Archbishop of Canterbury, Charles lost his strongest confidants. Parliament continued its offensive. He demanded reform of the church, the abolition of the episcopate, the right to appoint and remove ministers, control of all actions of the monarch. Karl rejected these demands: "If I agreed to this, I would become only a ghost, an empty shadow of the king." In November 1641, Parliament adopted the Great Remontstration, a collection of articles listing the crimes of the crown. In connection with the uprising in Ireland, England decided to form an army. However, parliament refused to consider the king as supreme commander.

The king could no longer retreat. He learned that his position had not previously been as hopeless as he was led to believe. He has supporters in parliament itself, counties and the people. I learned that he was being deceived by playing the "war" with Scotland. Charles I became furious and in January 1642 ordered the arrest of five of the main conspirators. However, "the birds flew away," as the monarch himself noted. In response, the opposition expelled all supporters of the king from parliament, roused the townspeople to revolt. The king decided to leave the rebellious London, went to Oxford and announced a gathering of his supporters. Parliament began to form police units.

A sluggish civil war began. For three years she dragged on without much results. There were more parliamentary supporters, but they had poor organization and discipline. "Cavaliers" (royalist nobles) were more disciplined, had military experience. The king's troops were commanded by Charles' nephew, the young Prince Rupert, who had experience in the war with the Spaniards on the side of the Dutch rebels and in the Thirty Years War. The royal cavalry easily beat the "round-headed" (the name came from the short hair), parliamentary militiamen. However, the gentlemen acted without a special plan, strategy and did not use their first victories. The wealth of London and the major British ports, the resources of the bourgeoisie at first balanced the capabilities of the gentlemen. 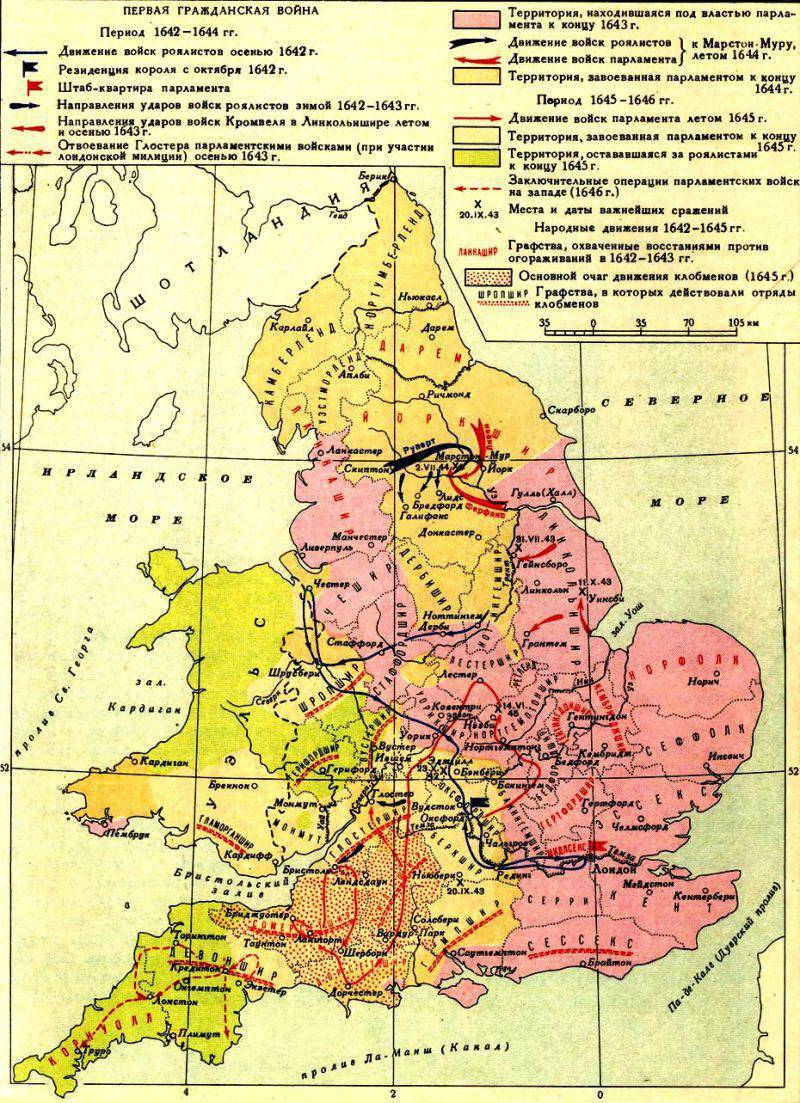 Cromwell and the new army

In the meantime, the opposition itself has split. Moderate Presbyterians ruled parliament. But more radical groups also gained strength. The Independents ("independents") opposed any church hierarchy (the power of the synods of presbyters) and royal power in general. They demanded the autonomy of local church communities. They proposed replacing the monarchy with a republic. Levellers ("equalizers") went even further. They said that power is not needed at all, each community can live by itself according to "divine rules." There were also Anabaptists, Brownists, Quakers, who considered themselves "saved" only, and the rest of the world mired in sin and lost.

In these religious squabbles, which were then of leading political significance, Oliver Cromwell came to the fore. He came from a bourgeois Puritan family, was elected a member of parliament, and became an ideological opponent of royal power. During the turmoil, he recruited and equipped an equestrian detachment of several dozen people. In 1643, under his leadership there were already 2 thousand people. They were nicknamed "iron-sided". His regiment became special and ideological. Cromwell attracted radical sectarians: Independents, Levellers, Baptists. Cromwell introduced the institution of propagandist preachers (political commissars of the time). They followed discipline, inspired the fighters. His soldiers did not drink alcohol, did not gamble. For offenses, they were severely punished. The discipline was iron. At the same time, the ideological regiment fought extremely brutally. Ironsides smashed the temples of the Anglican Church, tortured priests, did not spare royalists and papists (Catholics). A close-knit squad began to win battles. They noticed him and began to actively praise him. Cromwell became a hero of the revolution.

The Independents in the fight against the Presbyterians decided to stake on Cromwell. His successes were inflated, exaggerated, failures were hushed up or blamed on Presbyterian commanders. Cromwell was called "the savior". The commander himself believed in this, began to consider himself “chosen” to save the country. He showed himself as an excellent politician - unprincipled and cynical. Together with the Independents, Cromwell managed to achieve the democratization of the army. Under the Bill of Self-denial, all MPs resigned from command. Peers lost their traditional right to command the army. Thomas Fairfax became commander-in-chief, Cromwell received the second place in the army, the post of chief of all cavalry. Fairfax and Cromwell began to create a "new model army" following the example of the iron-sided ones. The army consisted of over 20 thousand soldiers, a total of 23 regiments (12 infantry, 10 cavalry and 1 dragoon). The troops were instilled in tough discipline and ideology (religious radicalism). 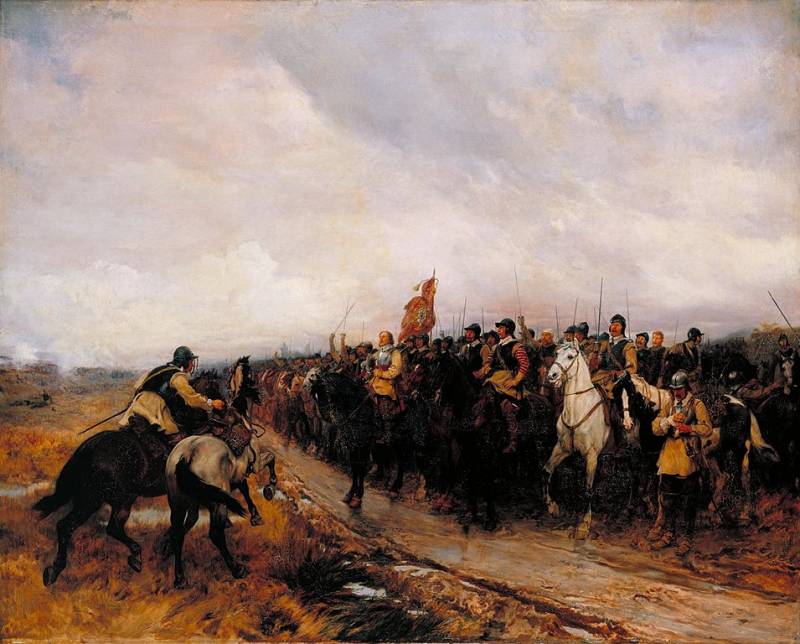 Andrew Carrick Gow. Cromwell and the Ironsides at the Battle of Dunbar

A turning point has come in the war. The more numerous and now well-organized roundheads began to beat the gentlemen. In the decisive battle at Naseby on June 14, 1645, 13 thousand army of Parliament under the command of Fairfax and Cromwell defeated 7 thousand royalists Karl and Rupert. The royal army ceased to exist: 2 thousand were killed, 5 thousand were captured. The king himself was able to escape to the Scots, but his archives were seized, where there were documents on ties with Catholics, Irish and France. Charles' secret correspondence was voiced by parliament as proof of the king's duplicity and treachery.

The Scots for some time kept the king in the position of a prisoner, they beat concessions out of him. In January 1647 Charles was sold to the British Parliament for £ 400. He was placed under arrest and did not know what to do with the king next. Presbyterians believed that Charles should be returned to the throne, but his power should be limited. Negotiations were underway with the king. Cromwell also took part in them. The deputies were afraid that the king would break his promises, were mired in disputes and came up with new guarantees. Meanwhile, radical sentiments grew and became stronger. The Independents refused to return the crown to Charles and called the Presbyterians "new tyrants." They offered to create a republic. The "equalizers" generally advocated universal freedom and democracy. Other sectarians dragged the country towards complete anarchy.

At the same time, the threat of dictatorship arose. The army has become a new political force. Cromwell formed the "General Army Council", which became a new political center, a competitor to parliament. Cromwell pushed Fairfax into the background and became the de facto commander in chief. Parliament tried to counter the new threat. Several leaders of the Independents and Levellers were arrested. They decided to send the army away - to pacify Ireland, and the remaining regiments to disband. They say the war is over, there is no money. But it was too late. Cromwell thwarted the demobilization through his preacher commissars. The regiments were not disbanded, they refused to disarm and did not go to Ireland. The All-Army Council began a struggle for power and published political documents. He promised to protect "freedom".

Meanwhile, the situation in the country was deplorable. The Troubles claimed tens of thousands of lives. Counties and cities were devastated, businesses stopped, agriculture suffered heavy losses. Prices rose rapidly, people were starving. The winners were in a hurry to reward themselves. The confiscated estates of the king, royalists and the church were seized. In predation, Presbyterians and Independents were not inferior to each other. The people rebelled again. In London, citizens shouted to the deputies that life was better under the king. Karl again had supporters.

Karl decided that he had a chance to turn everything in his favor. With the help of officers sympathetic to him, he fled to the Isle of Wight in November 1647. The king was supported by the fleet. In Scotland, the Presbyterians decided to support the royal power so that the country did not slide into complete chaos. In December 1647, the king made an agreement with the Scottish representatives: he pledged to recognize the Presbyterian Church in exchange for military assistance. Karl also began to negotiate with the Irish. Royalist revolts swept across England.

In the "army of the new model" unrest began. She was decomposed by levellers. The revolt was raised by four regiments, demanded to equalize all citizens in rights, redistribution of land. Cromwell was able to suppress the rebellion thanks to his enormous authority. He personally arrived in the troops, and attracted military preachers. The fight was avoided. The shelves were "cleaned", the ringleaders were executed, the leveling activists were fired or arrested. Discipline in the army was restored. The army was thrown against the Royalists and the Scots. The second civil war was even more ruthless than the first. Cromwell stated that the reason for the war was “leniency” towards opponents after victory. The guilt of the king and his supporters is now much higher. Victory in the first war shows that God supports the Puritans. So this is a rebellion against God. The soldiers were ordered to "take revenge." This led to brutal pogroms of cities and towns, burned down farms and mass executions.

The rebels could not withstand a well-organized and cohesive army. Most of the uprisings were spontaneous. In some places the revolt was raised by the royalists, in others the Presbyterians, who tried to protect the parliament from Cromwell, in the third - just starving peasants and townspeople. Scattered and spontaneous, the uprising quickly drowned in blood. Then Cromwell moved on the Scots. In August 1648, at the Battle of Preston, 8 thous. Cromwell's army crushed 20 thousand. the combined army of Scots and Royalists. Scotland asked for peace.

After that, Cromwell crushed Parliament. The military ordered the "purge" of the Presbyterians from Parliament. The House of Commons was terrified. I decided to summon the king, make peace with him. Karl agreed to reconciliation and came to London. But the power was already on the side of Cromwell. He easily threw away any semblance of legitimacy. In December, his regiments entered London, took Charles under arrest. Captain Pride burst into the House of Commons, arresting or expelling 150 MPs. Other MPs fled themselves. There are 50-60 people left from parliament, ready to vote the way Cromwell needs. This remnant has received the nickname "rump".

Cromwell carried out a great "purge" in London as well. The rioters, sympathetic to the king and the Presbyterians, were expelled from the city. Many were left homeless, property, livelihood, perished. The remnants of parliament, at the direction of Cromwell, decided in January 1649 to try the king. An unprecedented solution in that era. The House of Lords refused to accept this decision. The House of Lords was dissolved. The king's case was not accepted by any court. The Supreme Court of the army "saints" was established. The court found Charles guilty as a tyrant, traitor and enemy of the fatherland and sentenced him to death. On January 30, 1649, Charles was beheaded at Whitehall. In February, the monarchy was abolished, a republic was established and the State Council was created. Formally, the highest power in the country belonged to the parliament, but the "rump" was completely subordinate to the new dictator. As a result, Cromwell established a personal dictatorship - a protectorate. 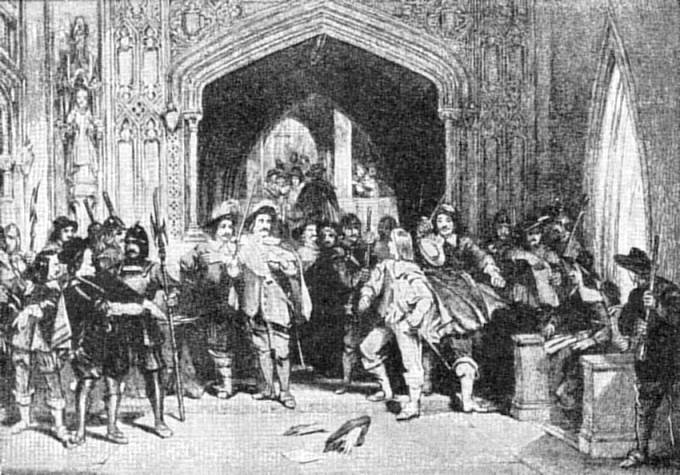