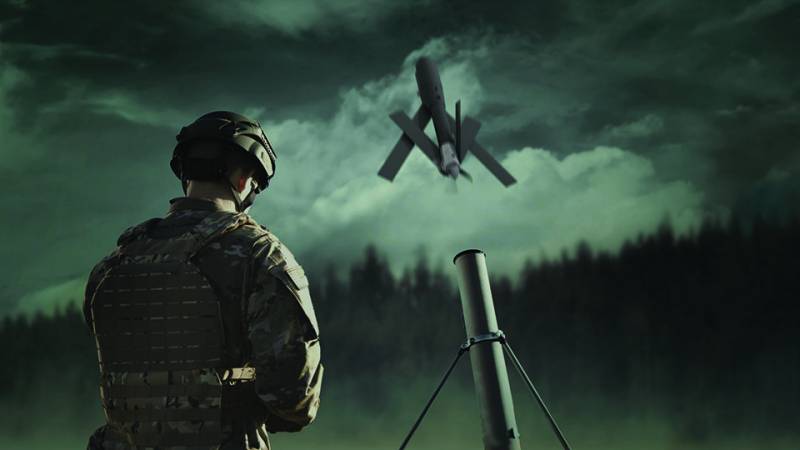 Several years ago, the American company AeroVironment Inc. introduced the Switchblade 300 loitering ammunition, designed to expand the combat capabilities of infantry units. The development of the ideas of this project continued, and now the company is presenting the Switchblade 600 product. It differs from its predecessor by increased tactical, technical and operational characteristics.

For the first time, the project, later designated Switchblade 600, became known at the end of 2018.Then the developer company announced that a new product was being created on the basis of the existing loitering ammunition. It will be larger than its predecessor and will be able to carry an anti-tank warhead, which significantly expands the combat capabilities of the complex.

In early 2020, AeroVironment disclosed new information about this project. It was reported that a series of test launches of experimental ammunition took place last year. The tests were recognized as successful: the new ammunition flew longer and farther, and also carried a heavier warhead. In addition, the development company noted that the range and low cost of the new Switchblade modification is superior to the existing army anti-tank complex FGM-148 Javelin. 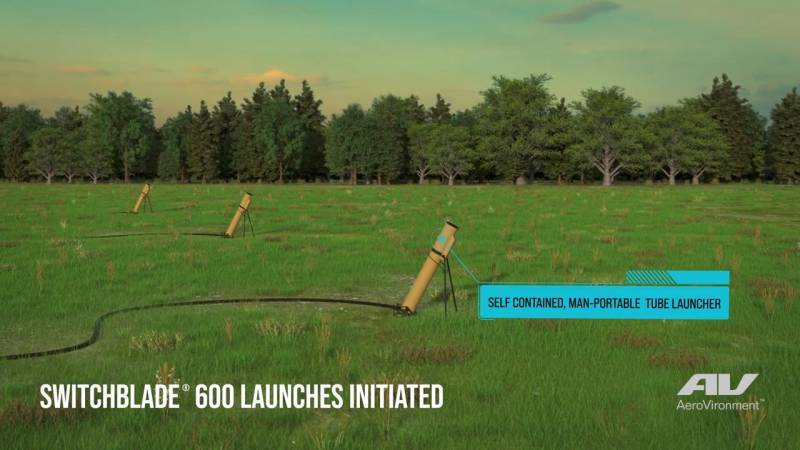 Launchers in position
Finally, in early October, the company published all the main materials on the new project, which bears the designation Switchblade 600. The main features of the complex, its characteristics, etc. are revealed. Images and promotional videos are available. A new phase of testing is also reported. To date, more than 60 launches have been completed, and the complex has shown its efficiency.

The Switchblade 600 complex consists of several products and in its composition is significantly different from the previous system. It includes loitering supplies in a transport and launch container, made as an independent launcher, as well as a control panel in the form factor of a tablet computer. All components can be carried by the forces of the fighters or transported on any available transport - with or without closures.

The ammunition is supplied in a TPK with a length of approx. 1,8 m. The container can be used on a biped, which allows you to launch yourself. Supporting devices are also being developed for mounting the complex on cars, armored vehicles, boats and helicopters. In most cases, the launch occurs in the same way: "like a mortar", with a large elevation angle. After leaving the TPK, the ammunition begins an independent flight. 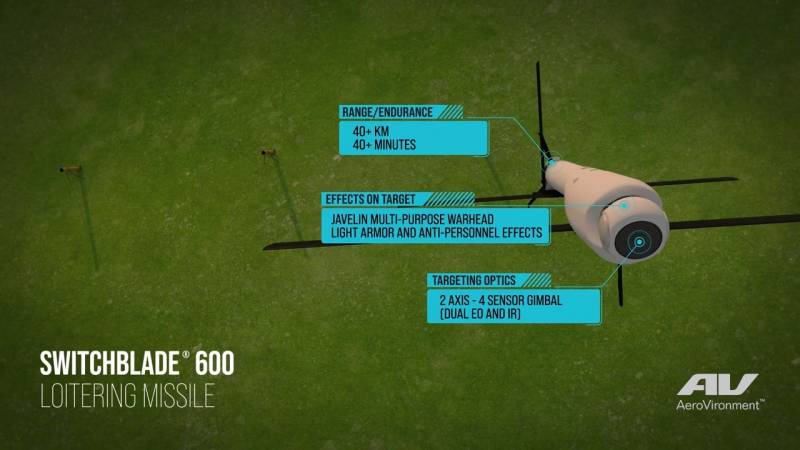 Ammunition after launch
Loitering ammunition of the new type looks similar to the previous Switchblade 300. It is made in a case of variable cylindrical cross-section: the nose, containing the homing head and the warhead, is distinguished by a large diameter. In the central part of the hull there is a wing that can be folded in flight, in the tail there is a stabilizer and a keel. An electric motor with a pushing propeller is installed in the tail of the vehicle.

In the bow of the hull there is an optoelectronic unit in a movable housing, used as a reconnaissance tool and seeker. The unit has daytime and thermal imaging channels. Also on board there is an autopilot with a satellite navigation system and communication facilities for exchanging data with the operator.

Switchblade 600 is equipped with a tandem HEAT-fragmentation warhead, borrowed from the Javelin ATGM. Such a warhead can penetrate up to 600-800 mm of homogeneous armor behind ERA. There is a contact and remote fuse. A product with such a warhead can be used against armored vehicles and various structures. 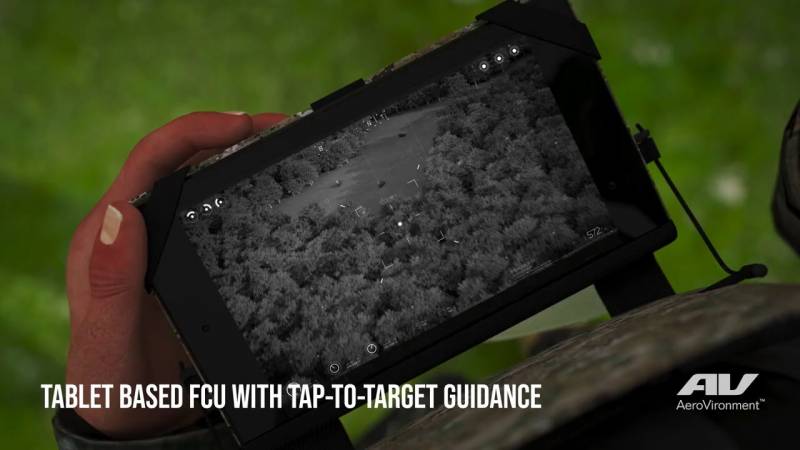 Operator console
The operation of the complex is controlled using the operator's console-tablet through a secure radio channel. The touch screen displays a map of the area or a video signal from the seeker of the ammunition, as well as telemetry. Compatibility with modern communication facilities is ensured. The console can receive data from third-party sources and transmit information about self-detected targets. The control panel software implements the principles of intuitive control. In particular, the target is selected by simply clicking on the desired object on the screen.

In terms of operating principles, the Switchblade 600 is similar to its predecessor, but has a number of important differences in technical and combat characteristics. If necessary, the calculation of the complex, which is part of the infantry unit, deploys the launcher, which takes no more than 10 minutes. The operator then determines the target area and launches.

The ammunition with an electric motor, leaving the TPK, opens the plane and goes to the target. The flight is carried out at altitudes of no more than 200 m, however, if necessary, it is possible to climb to great heights. The operating range is at least 40 km from the operator. The flight to this range takes no more than 15-20 minutes, after which patrolling begins in the specified area. The maximum flight duration reaches 40 minutes. Thus, the operator has at least 20 minutes. to search and defeat the target. 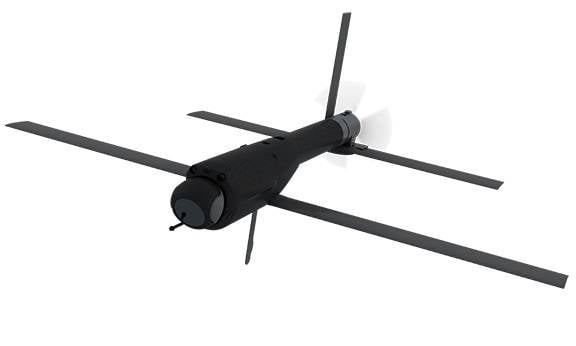 With the help of standard optical-electronic means of ammunition, the operator monitors the area and searches for the target. After detection, the target is taken for tracking, and the unit receives a command to attack. Targeting is carried out independently using a two-channel seeker. The defeat occurs from the upper hemisphere, which poses a great danger to armored vehicles.

The proposed Switchblade 600 complex has a number of important features that expand the combat capabilities of an infantry or other unit. Some of these advantages are due to the very fact of belonging to the class of "loitering ammunition", while others are associated with the characteristics of the new product.

Loitering ammunition is essentially a reconnaissance UAV with the ability to engage a target. It provides surveillance of a remote area and allows you to attack the enemy. At the same time, a sufficiently large flight range and the ability to search for a target after reaching a given area are provided. Installing a warhead from a full-fledged ATGM system dramatically increases the lethality.

From other loitering ammunition, incl. Switchblade 300, a new product with increased flight range and warhead power. In addition, measures have been taken to optimize transport and launch processes, and controls have been improved. Particular attention is paid to cost. The new Switchblade 600 is slightly more expensive than its predecessor, but significantly cheaper than systems of other classes, incl. ATGM FGM-148. 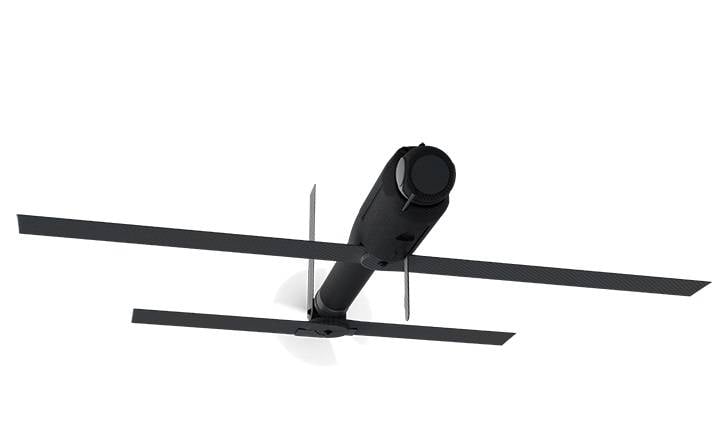 However, some shortcomings that are characteristic of the entire class remain. Thus, the loitering ammunition is disposable and does not provide for landing after the flight is completed. In addition, due to the simplification of the onboard equipment and other objective limitations, the Switchblade 600 may be inferior in some characteristics to a full-fledged reconnaissance UAV.

All in all, the new Switchblade 600 project from AeroVironment Inc. is of great interest to the US Army and other countries. The previous development of this family has already entered service and has shown itself well in operation. It is possible that her enlarged and improved successor will also go to the army and show all its advantages.

The development company announces the completion of the development and 60 test launches. The details of such tests, such as the proportion of successful flights, are not specified, but the announced figures look very interesting. Apparently, now AeroVironment and the Pentagon will decide the issue of adopting a new model for service. Thus, in the near future, the American infantry will have two loitering ammunition of the same family.

Ctrl Enter
Noticed oshЫbku Highlight text and press. Ctrl + Enter
We are
Dron-kamikaze from the concern "Kalashnikov"Artificial Intelligence. Part two: extinction or immortality?
66 comments
Information
Dear reader, to leave comments on the publication, you must to register.