Boom XB-1 experimental aircraft. The future of aviation or a long history? 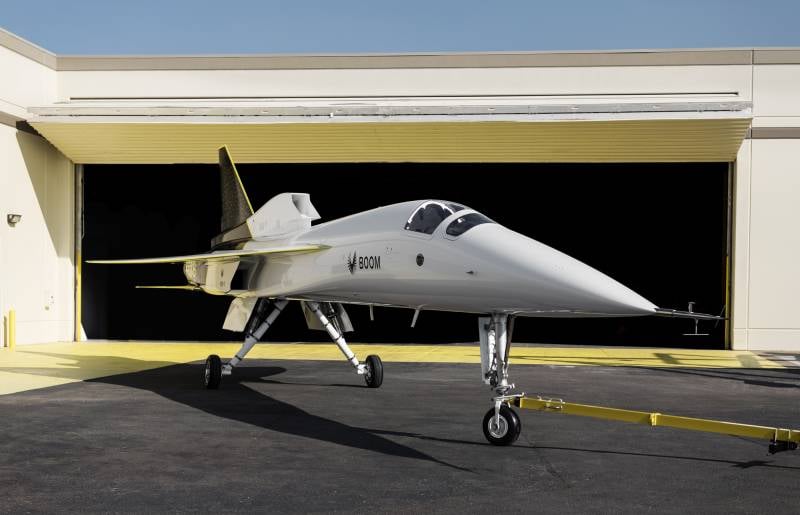 Experienced XB-1 at the workshop gate

After several years of announcements and regular transfers, the American company Boom Technology rolled out the experimental XB-1 Baby Boom aircraft. Next year, the car will go to flight tests, during which it will have to confirm the correctness of the applied solutions and technologies. If the tests are successfully completed, the development company will design a new supersonic passenger aircraft.

Boom Technology (Boom Supersonic trademark) was founded in 2014. Its goal was to immediately create a supersonic passenger aircraft (SPS). At the first stage, it was planned to develop and test a technology demonstrator aircraft, and then, on the basis of proven solutions, make a full-fledged commercial aircraft.

The XB-1 experimental aircraft was announced in the fall of 2016 and was shown a full-size mockup at the same time. Then it was stated that the plane would take off before the end of next year. A few months after the announcement, the company managed to find the required funding and start a full-fledged design. Soon, individual components of the structure were manufactured and tested. At the same time, the plans had to be revised. Due to delays at various stages, the first flight was first postponed to 2018, and then to 2019. 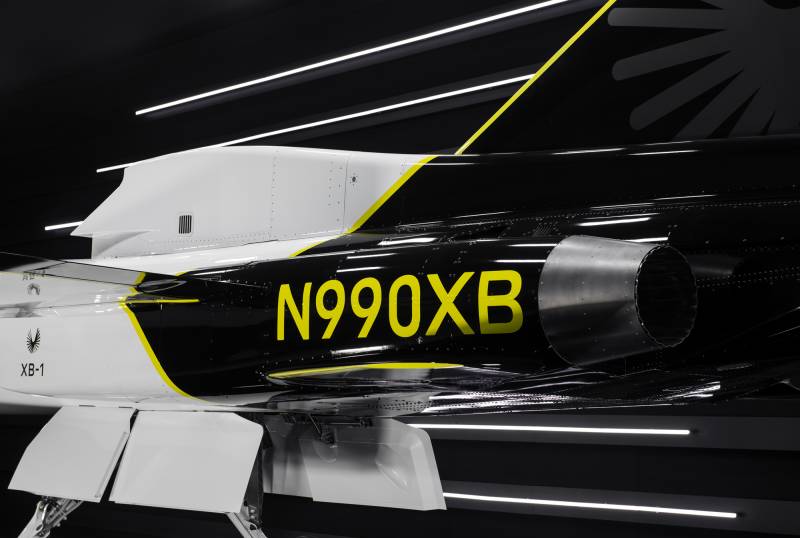 Left nacelle and keel
Individual components of the future aircraft have been manufactured since 2017. For example, the plumage was made by the summer of 2018, and the production of composite fuselage elements was launched only in the spring of 2019. In March 2020, static tests of the wing of the original design took place. After that, the wing was connected to the fuselage. In the summer, the final assembly of all existing sections and the installation of the remaining equipment began.

On October 7, Boom Technology carried out a roll-out of the finished prototype aircraft. For obvious reasons, this event was broadcast online. The developers spoke about the main features of the new aircraft, and also revealed their plans for the future. In particular, the first flight of the XB-1 is now scheduled for 2021.

The XB-1 Baby Boom project is designed to test the technologies necessary for the further development of a full-fledged PCA. The experimental aircraft is a smaller analogue of a passenger aircraft with all its characteristic features, from contours to structural elements. 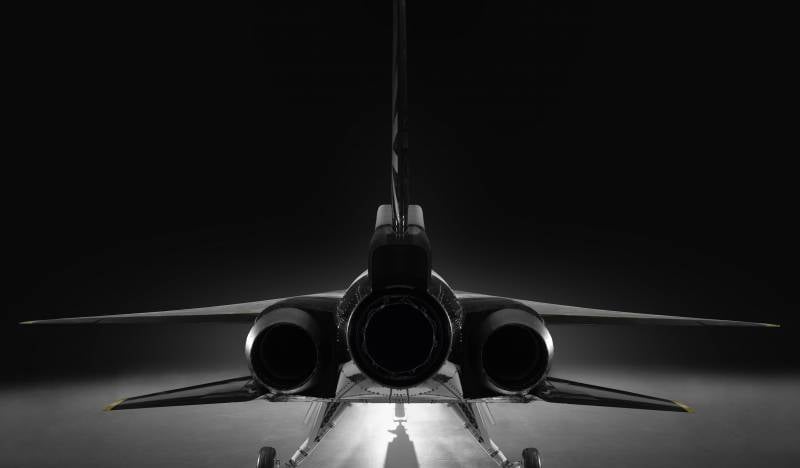 The aircraft design uses a variety of materials typical of modern aircraft construction. The power set is made of aluminum alloys and titanium. A significant part of the cladding is made of carbon-based composites, incl. resistant to high temperatures. Leading manufacturers of such materials were involved in the project as suppliers.

According to calculations and preliminary tests, a number of elements at cruising speeds heat up to 150 ° C or more, which imposes special requirements on their design and necessitates the use of new materials. The use of a cooling system for the airframe using circulating fuel has also been reported.

The demonstrator aircraft received a spindle-shaped fuselage of large aspect ratio with a two-seater cockpit. The central compartments contain equipment and fuel tanks. The tail houses three General Electric J85-15 turbojet engines. The two engines are located in side nacelles with frontal bucket air intakes. The third is located between them, in the fuselage; its air intake is brought up, in front of the keel. All intakes are adjustable.

The XB-1 received a thin delta wing with a rounded leading edge, offset to the fuselage tail. Mechanization is located along the trailing edge of the wing. The main governing bodies are the elevons. Above the central engine is a swept keel with a rudder. 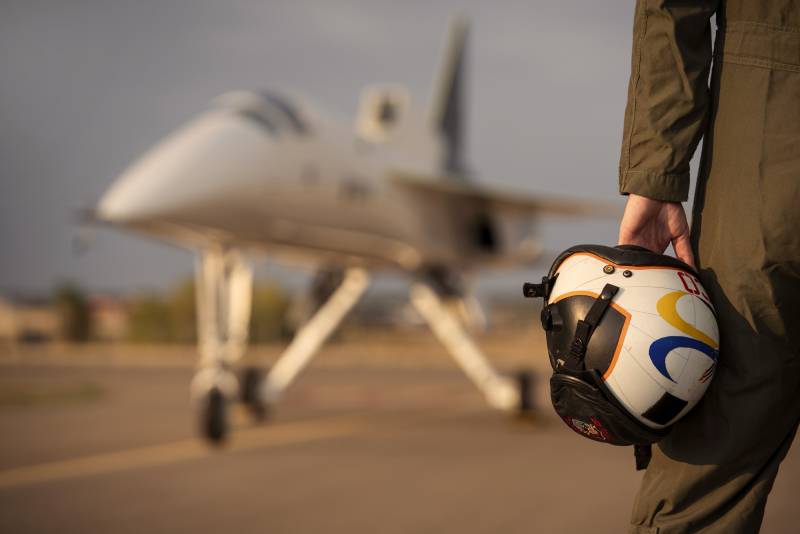 Due to improved aerodynamics with the ability to change parameters in different modes, a modern power plant and other measures, noise is reduced. According to calculations, the XB-1 should be 30 times quieter than the serial Concorde ATP. It is also expected that the supersonic shock wave will weaken and the negative impact on the environment will decrease.

The aircraft receives modern navigation equipment and control systems. When developing avionics, the specific features of the ATP were taken into account. In particular, the problem of limited visibility at landing was solved by using video cameras on the nose of the car.

The prototype aircraft has a length of 21 m with a wingspan of 5,2 m and a take-off weight of 6,1 tons. It will have to develop a maximum speed of up to M = 2,2, and its design range is at least 1860 km. Also, with the help of the XB-1, it is planned to demonstrate some advantages of an economic nature.

After a number of postponements, the first flight of the XB-1 Baby Boom is scheduled for 2021. It is highly likely that such plans will be fulfilled - the availability of the finished machine is encouraging. Over the next few years, the technology demonstrator will be tested and proven to be correct. 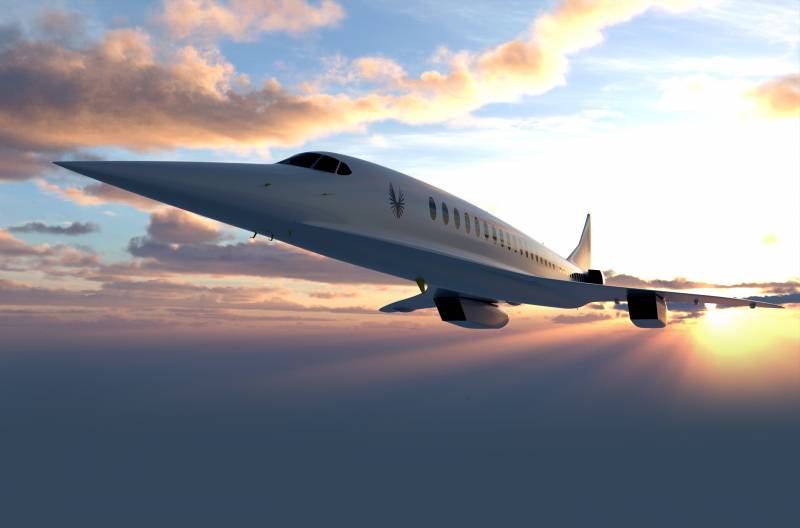 The design of the passenger Boom Overture
Based on the test results of the XB-1, work will be continued on the Boom Overture real ATP project. It will be a vehicle with a length of more than 50 m with an 18 wing and a take-off weight of at least 75 tons. It will receive a saloon for 45-55 passengers, divided into several classes. In terms of speed characteristics, Overture must correspond to Baby Boom, the maximum flight range will be increased to 8,3 thousand km. The estimated cost of the production aircraft will be at the level of $ 200 million, excluding cabin equipment.

The development company believes that the promising ATP Overture will be able to find its place in commercial air transportation and significantly affect the market. According to her calculations, such an aircraft can serve 500 routes around the world and is capable of showing favorable economic characteristics on them. To work on these lines you need approx. 2 thousand aircraft, which creates a fairly large market.

A high flight speed will have obvious advantages. The flight from London to New York will take 3 hours 15 minutes, and from San Francisco to Tokyo they promise to deliver in 5 hours 30 minutes. The cost of a flight across the Atlantic Ocean can be increased to $ 2-2,5, which is comparable to the price of a business class ticket and several times cheaper than a flight on the Concorde in the past (taking into account inflation). 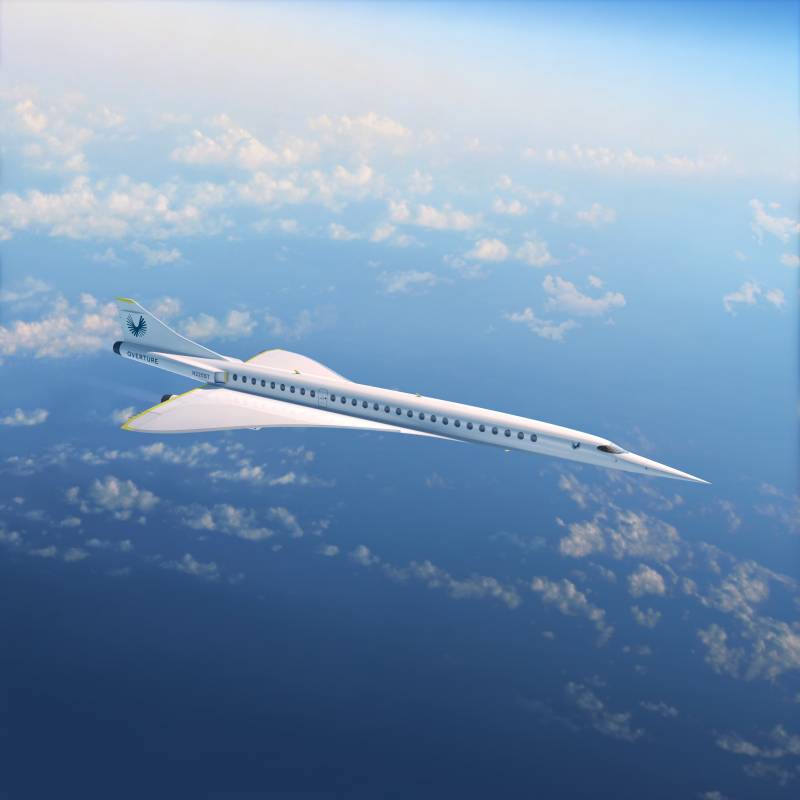 However, objective limitations remain. So, over populated areas it will not be possible to fly at supersonic speed - such advantages can only be realized over oceans or unpopulated areas of land. In addition, specific infrastructure elements will be required to operate the new aircraft.

The announced economic characteristics have already attracted the attention of customers. Back in 2016, almost immediately after the first announcement, the Virgin Group agreed to invest in the development of Boom aircraft and placed an option for 10 units. Overture. In 2017, preliminary agreements with Japan Airlines and an unnamed European airline appeared.

Boom Technology currently has agreements with five airlines from different countries. If they are turned into real contracts, then 76 aircraft will go into operation. JAL may become the largest operator of Boom Overture - at least 20 units. 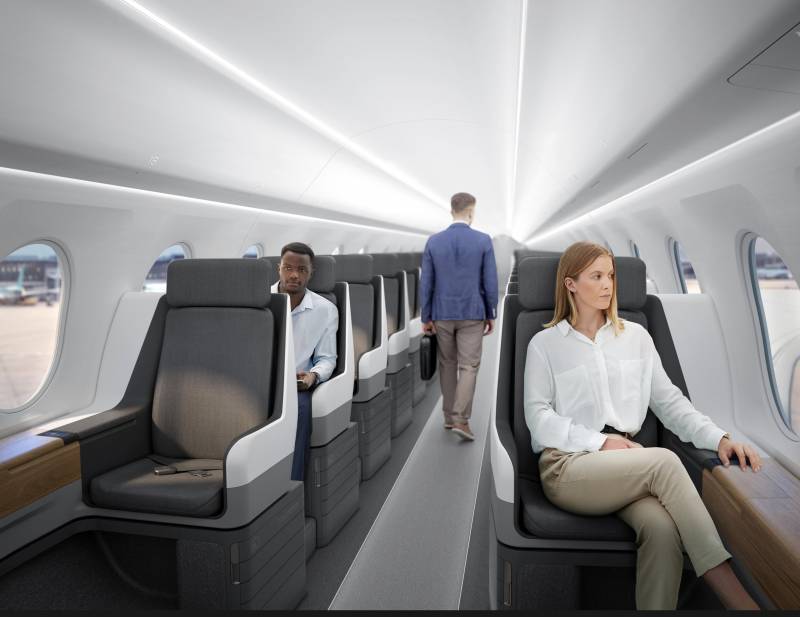 Interior design option Overture
It is noteworthy that preliminary orders for 76 aircraft were received not only before the completion of the development of a full-fledged ATP, but also before the start of testing the technology demonstrator. It is possible that the new XB-1 Baby Boom will gain the attention of new customers as it passes tests and shows various successes.

To date, Boom Technology and related enterprises have completed a significant part of the work, the result of which is now a prototype aircraft for practical testing of technologies. Its tests may last for several years, and as a result, the design of a full-fledged passenger liner will begin. According to the most optimistic estimates, the production Boom Overture machines will enter service in 2028-30.

Due to a number of well-known and new solutions, components and technologies, a promising supersonic passenger aircraft must have good technical and operational characteristics. It is these features of the project that attract potential customers and have already become the reason for pre-ordering dozens of cars.

The further fate of such agreements directly depends on the expected tests of the experimental XB-1 Baby Boom. It is possible that this particular car will lay the foundations for a real revival of the supersonic passenger aviation... However, a negative scenario is no less likely. In parallel with Boom Technology, recognized industry leaders are working on the topic of PCA, and so far they have not been able to create a worthy and commercially viable example.

Ctrl Enter
Noticed oshЫbku Highlight text and press. Ctrl + Enter
We are
Myasishchev M-53. Supersonic passengerAn-12 in Afghanistan
23 comments
Information
Dear reader, to leave comments on the publication, you must to register.