Kyrgyzstan today: “yurts of protest” in the streets and a power vacuum 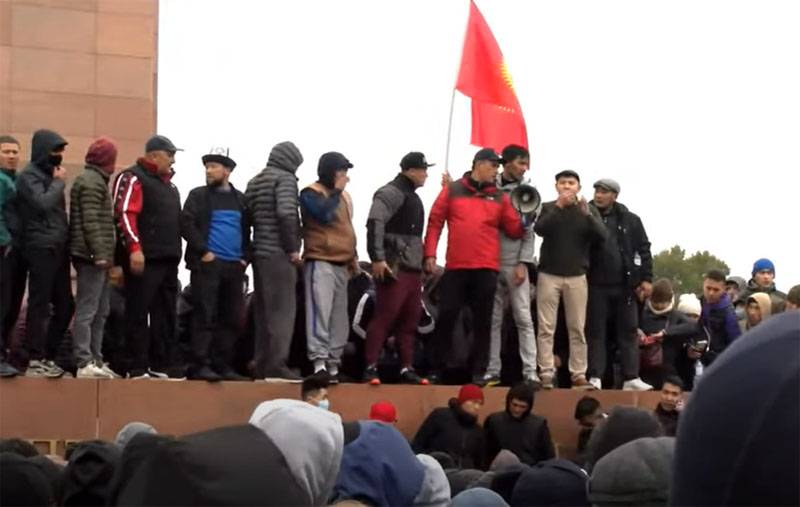 The situation in Kyrgyzstan continues to remain extremely tense, where the results of the parliamentary elections were invalidated. Recall that such a confession took place under pressure from the opposition. President of the Kyrgyz Republic Sooronbai Jeenbekov, who announced his departure for self-isolation, calls on the protesters to return to the constitutional track and begin a constructive negotiation process. However, there is still little constructiveness.


The re-emerging acuteness of the long-standing conflict also adds complications. This is the confrontation between the clans of the north and south of Kyrgyzstan.

A new opposition symbol appears on the streets of Osh - “yurts of protest”. They gather those who do not see the future of Kyrgyzstan without a person representing the interests of the south in the country's government. Delivery of food products has been established.

Youth groups are trying to say their word, claiming that "power must pass into the hands of the youth, otherwise the protest actions will continue."

At the same time, raiders became active in Bishkek and other cities of the republic. They are trying to resist the squads, formed from employees of enterprises, which are trying to seize unknown forces.

In fact, in Kyrgyzstan today there is a clear power vacuum. Against this background, the Batken region, where there are relatively large Uzbek enclaves - Vorukh and Ravan, may "flare up". In this regard, the situation in Kyrgyzstan is being closely monitored in neighboring Uzbekistan.

It should be noted that Kyrgyzstan holds the record in the entire post-Soviet space in terms of the number of coups, Maidans and persecution of former leaders.

Recall that the Russian Kant airbase with a 2nd class airfield is located in Kyrgyzstan. Russia pays Bishkek about $ 4,8 million a year for its rent.
Ctrl Enter
Noticed oshЫbku Highlight text and press. Ctrl + Enter
We are
Events in Kyrgyzstan: Protesters took control of several administrative buildings in BishkekRussia's interests in Kyrgyzstan are under threat
128 comments
Information
Dear reader, to leave comments on the publication, you must to register.