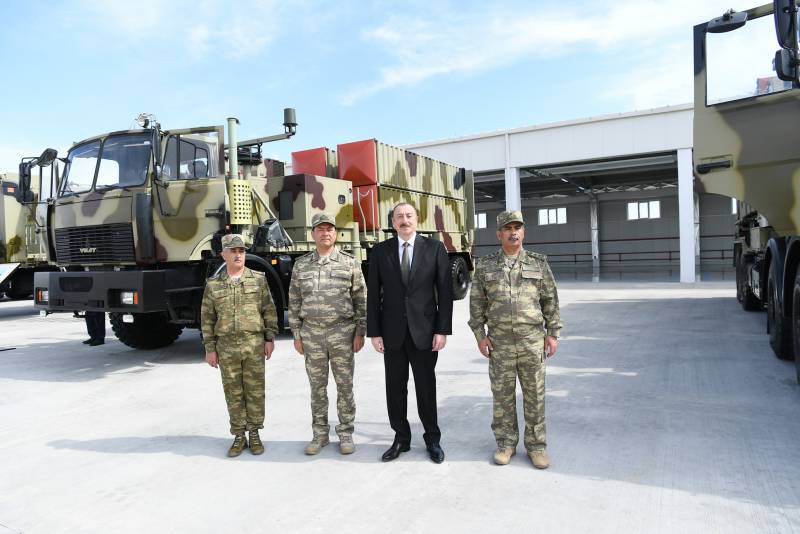 OTRK LORA of the Azerbaijani army, photo: press service of the President of Azerbaijan

In the modern world, interest in high-precision arms consistently high. At the same time, the positions of Russia and the United States are strong on the market of operational-tactical missile systems. Both countries have Iskander-E and MGM-140 ATACMS systems in their military export portfolios. Israel is ready to compete with the two countries, in which Israel Aircraft Industries (IAI) has developed its own operational-tactical missile system LORA.

Interest in such weapons has increased against the backdrop of another aggravation of the Karabakh conflict between Azerbaijan and the unrecognized Nagorno-Karabakh, which is supported by Armenia. The Armenian army is armed with Russian Iskander-E complexes. The Azerbaijani army is armed with Israeli LORA complexes. It is believed that it was Azerbaijan that became the first foreign customer of these OTRK. At the same time, the complex has already been used in combat conditions. It is believed that this particular complex was used on October 2, 2020 to destroy the road bridge across the Akari River, connecting the territory of Armenia with Nagorno-Karabakh.

It is worth noting that during the offensive launched at the end of September 2020, Baku is actively using all available weapons: numerous MLRS systems, the Israeli LORA OTRK, Israeli and Turkish drones, the Russian heavy flamethrower system TOS-1A "Solntsepek" and other samples military equipment.

Operational-tactical missile systems are modern high-precision weapons that can hit important targets in the operational rear of the enemy. These complexes are suitable for engaging both relatively small and area targets in the depth of the operational formation of enemy troops, usually at a distance of up to 500 km. Traditional targets for OTRK are command posts and communication centers, airfields, positions of air defense systems, military bases, columns of military equipment on the march or in places of concentration, important infrastructure facilities (for example, bridges, warehouses). 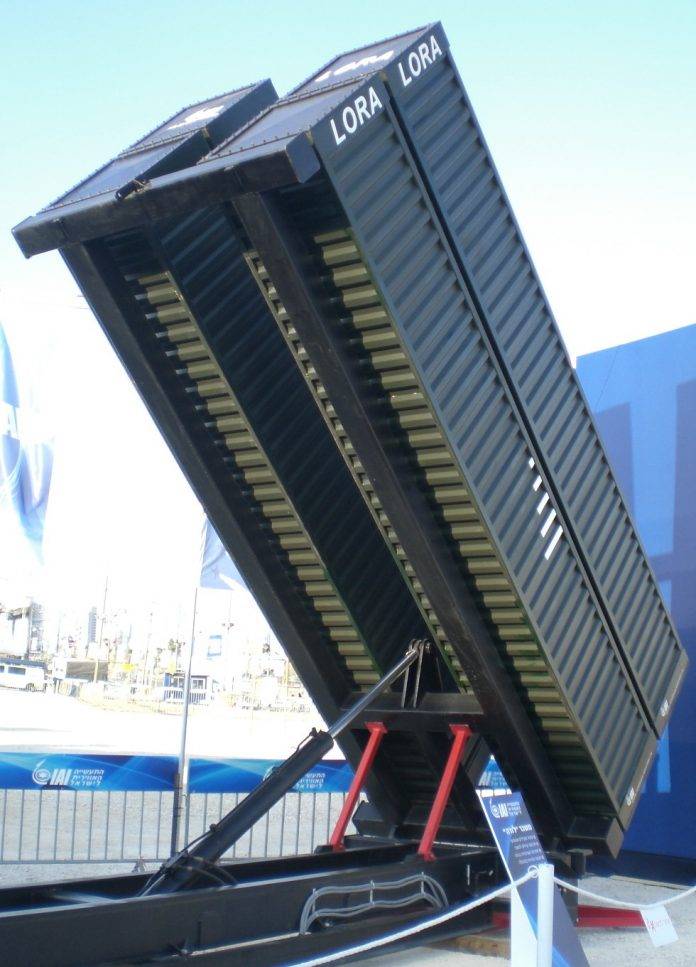 Israeli OTRK LORA
Israel, which is all modern history of its existence is located in the ring of unfriendly Arab countries, was also interested in the possession of such weapons of its own production. Fortunately, OTRKs can play the role of a deterrent and are in demand on the international arms market, which is also very important. Possessing a developed defense industry, Israel began developing its own operational-tactical missile system in the early 2000s.

The first media reports about the new Israeli development appeared at the end of 2003. Then India showed interest in the new rocket. Moreover, the development was so secret at that time that the official representatives of the Israeli Ministry of Defense, after publishing materials in the press about India's interest in the new Israeli complex, denied the very existence of the missile.

It is known that successful tests of the new missile were carried out in March 2004 in the Mediterranean Sea, after which Israel stepped up its attempts to sell the new product on the international market. In 2007, a full-fledged debut of a solid-propellant rocket took place at the international Paris air show, which is held at Le Bourget airport, 12 kilometers from the French capital. The new complex was officially adopted by the Israeli army in 2011, while it was the Israelis who for a long time remained the only operator of the OTRK, until in 2018 the first complexes were transferred to Azerbaijan, which held an open presentation of new products. 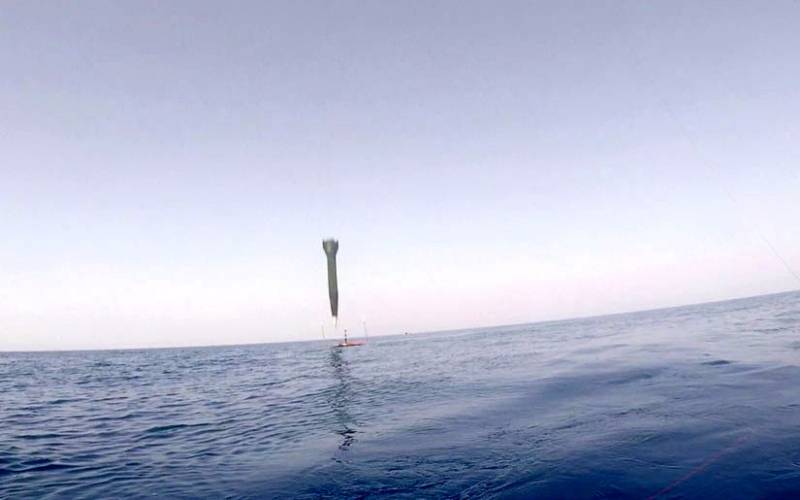 The defeat of a floating sea target by a LORA rocket, photo: www.iai.co.il
Among other things, Azerbaijan then received the Belarusian MLRS "Polonez". This Belarusian complex, using Chinese missiles, in some configurations comes close in its capabilities to modern OTRK both in missile launch range and in the mass of warheads used. It is noteworthy that the novelties were demonstrated by Azerbaijan in June 2018 at one military base, as noted in the media, during the opening of a new unit of the missile forces of the Azerbaijani Defense Ministry by President Ilham Aliyev. Both novelties presented at that time were based on a wheeled chassis of Belarusian production: types MZKT and MAZ.

What is known about the LORA complex?

The Israeli LORA tactical missile system is based on the eponymous single-stage solid-propellant ballistic missile. The abbreviation itself stands for Long-Range Artillery Missile. The complex was originally designed for use in both land and sea deployment options. The last tests of the complex from an offshore platform with shooting at small-sized floating targets were carried out quite recently, on June 2, 2020. During the tests, two missiles were launched at a range of 90 and 400 kilometers. Both missiles successfully hit the floating target shields, and the tests themselves were deemed successful.

According to IAI specialists, LORA missiles deployed on mobile or offshore platforms are capable of effectively hitting targets located deep in enemy territory, including strategically important targets. The missile is capable of hitting not only stationary but also maneuvering targets. As noted on the manufacturer's website, missiles can be launched in a matter of minutes, even from unprepared positions. At the same time, any target, the location of which is known and which is within the reach of the missile, can be attacked and destroyed in less than 10 minutes from the moment the decision was made to launch. 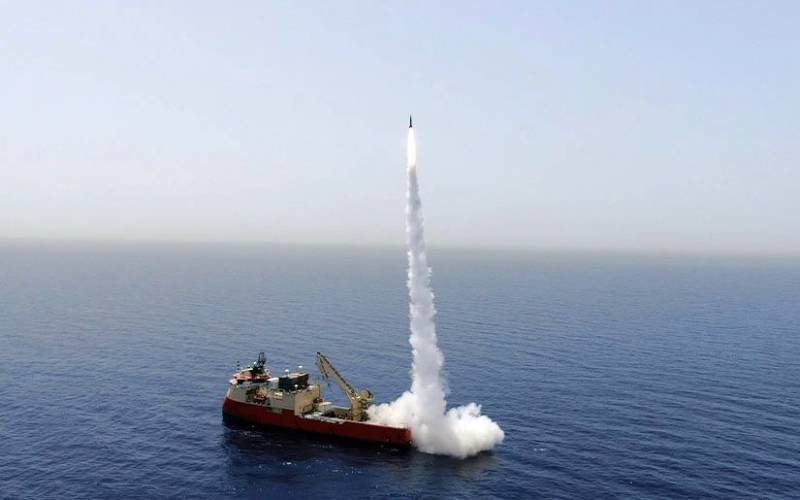 Launch of the LORA rocket from the ship on June 2, 2020, photo: www.iai.co.il
The LORA rocket itself is shipped and stored in an airtight transport and launch container (TPK), which ensures low maintenance costs. The shelf life of the rocket in the field without the need for preventive maintenance is 7 years. The complex itself is a package of four TPK. Such a package of four integrated transport and launch containers can be easily stowed on any 16-ton platform truck. In particular, the LORA complexes supplied to Azerbaijan are based on the chassis of the Belarusian MZKT. When the complex is located at sea, it can be installed directly on the deck of the ship.

According to information on the website of the Israel Aircraft Industries, LORA missiles are able to hit targets at a distance of 90 to 430 kilometers. The manufacturer declared the following characteristics of the rocket: diameter - 625 mm, length - 5,2 meters, weight - 1600 kg. The rocket is equipped with a single-stage solid-propellant rocket engine. It is emphasized that the entire electronic filling of the rocket is presented on solid-state components, the rudder drives are electric (the rocket has no hydraulics and hydraulic elements).

The rocket is equipped with an inertial navigation system for targeting, which is combined with GPS navigation. The circular probable deflection of the missile declared by the manufacturer does not exceed 10 meters within the effective range. It is known that the missile can be equipped with two types of warheads - high-explosive fragmentation and penetrating. The manufacturer does not disclose the mass of the missile warhead, but in open sources you can find information that at least three different warheads weighing 240, 400-440 and 600 kg are available. Depending on the used warhead, the maximum range of the missile also changes. 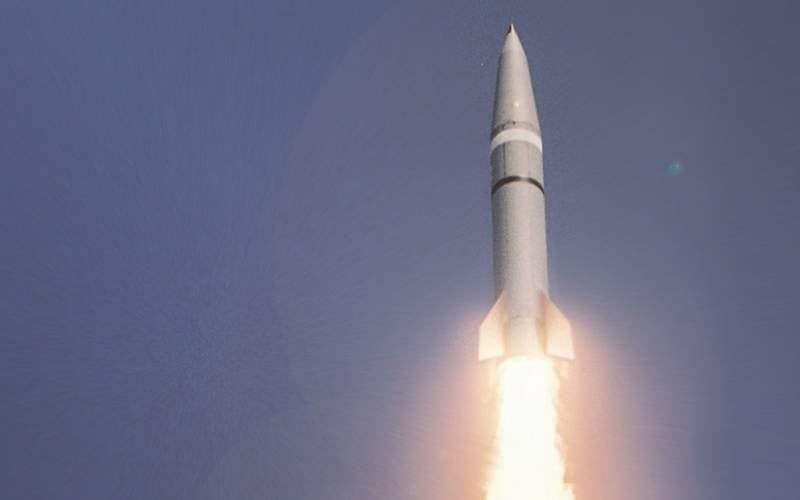 Ctrl Enter
Noticed oshЫbku Highlight text and press. Ctrl + Enter
We are
LRPF, alignment on the "Iskander"Missile attack on Europe: myth or reality?
148 comments
Information
Dear reader, to leave comments on the publication, you must to register.