Something with our memory has become 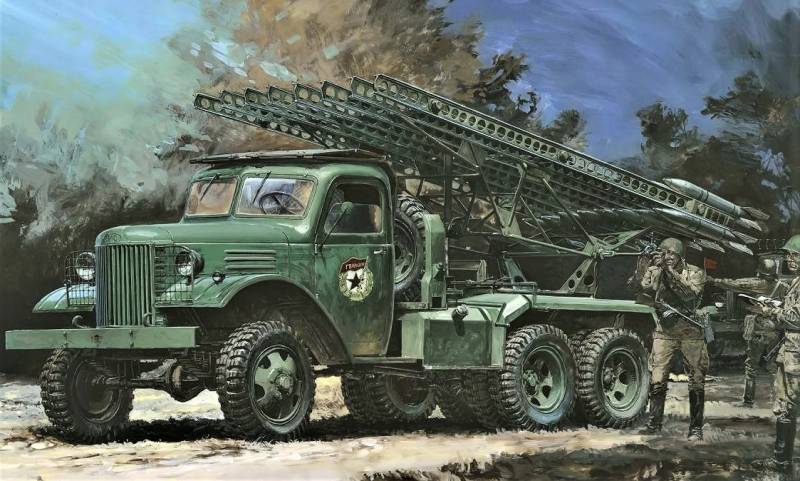 Now it's almost the center

Golovinsky district has never been listed in the prestigious. After all, it is located right behind the Okruzhnaya railway, which has now become the MCC - and this was the working belt of the capital. In the old neighborhood that wears today historical the name of the former owners of these places, the Golovins, and princes, and counts, and simply nobles, there are ponds, a park abandoned for many years and a small quiet cemetery.

And, of course, residential buildings of various years. It is believed that somewhere here is the source of the Likhoborka River, which carries its waters across the entire north of Moscow to the Yauza. Nearby is the Mikhalkovo estate, known to this day as neighbors of the Golovins. 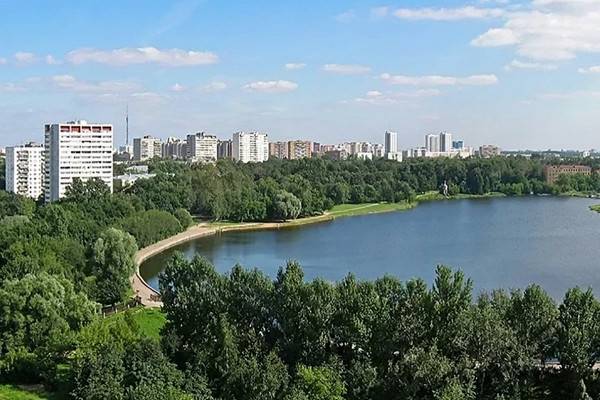 In Soviet times, it was almost swallowed up by the fine-cloth factory named after Peter Alekseev, as well as numerous closed research institutes and numbered factories. Technicians, including rocket scientists and nuclear scientists, settled there many years ago. On the other hand, the residents of the Golovinsky district, which before the construction of the Moscow Ring Road was not considered Moscow, even today are almost not hooked on the capital's new buildings.

Apparently, because the builders have nowhere to roam here. But in recent years, the residential-industrial area has revived, especially since the MCC station is now nearby, and it has reunited the two sides of the railway - the Golovinsky district with the Koptevo district.

The park was generally put in perfect order with tiled paths, the ponds were cleaned, albeit with considerable losses for the ecosystem. And in the Mikhalkovo estate, according to all sources, the notorious old new owner has seriously settled down, who even opens it to the public on weekends. 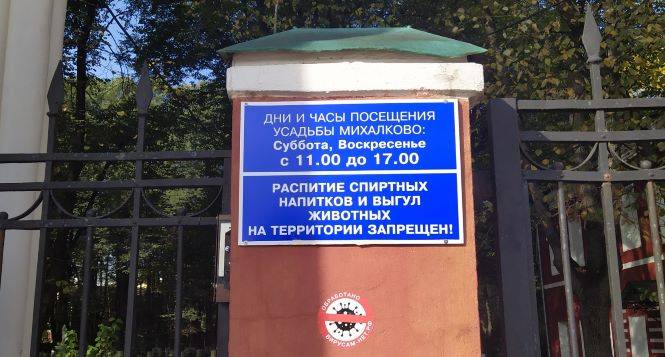 The factory was brought to bankruptcy in 2011, despite the production of a truly unique thin cloth. Like many industrial enterprises in Russia, the factory fell into oblivion, and the elite LoftPark district arose on the site of industrial buildings.

He became one of the few, the construction of which was declared illegal, but that changed little. About the factory and its director, all respected Wilhelm Ivanovich with a rare surname Jokish, now, it seems, only memory remains.

To the outskirts - for rockets and Studebakers

But there is also a memory of the factory club, which has become a real Palace of Culture not only for the factory, but for the entire district. And fortunately, not only memory: the club, built fifteen years before the war by the architect Leonid Vesnin, one of the famous brothers, was recently restored, but is still idle for various reasons. 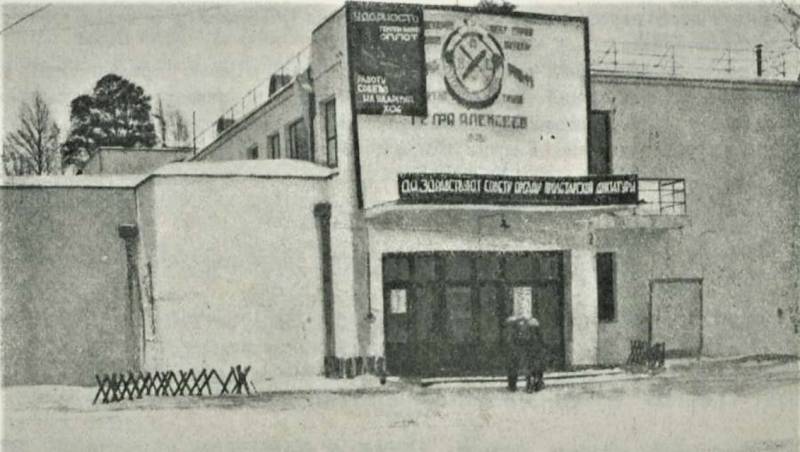 Club of the fine cloth factory named after Pert Alekseev 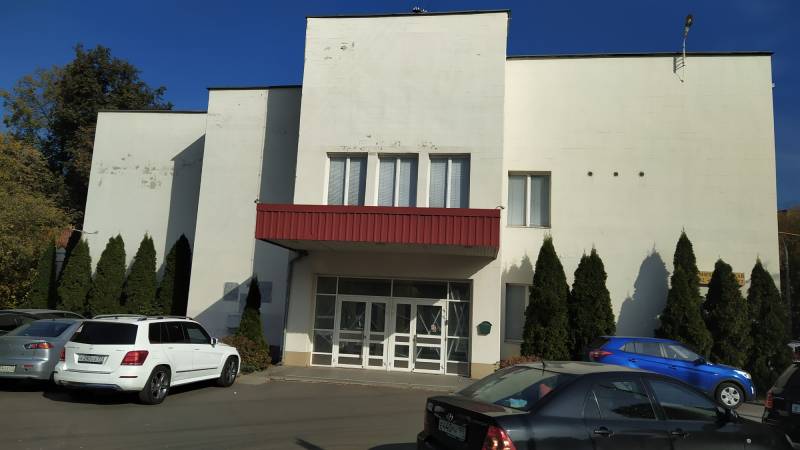 During the war, this club became the home of three guards mortar regiments. One of them, the 18th, originally from the Guards, as provided by the order of the Supreme Commander, settled here in 1943 for a long time, after being badly battered in the battles of Kerch and Novorossiysk, and then in the battle for Stalingrad.

The regiment received good reinforcements and equipment on the outskirts of Moscow, starting with launchers and brand new Studebakers right from the marshalling unit of the Likhobory depot, located nearby, and ending with RS-132 rockets, which were brought up to the front for several days before directly from the repurposed capital plant "Compressor".

They had to stay in Moscow because the technology for installing Katyusha on American trucks was somewhat different from the standard one designed for the ZIS-5. The 18th Mortar Regiment later became the Mginsko-Pomeranian and Red Banner Regiment, received the Orders of Kutuzov and Alexander Nevsky. 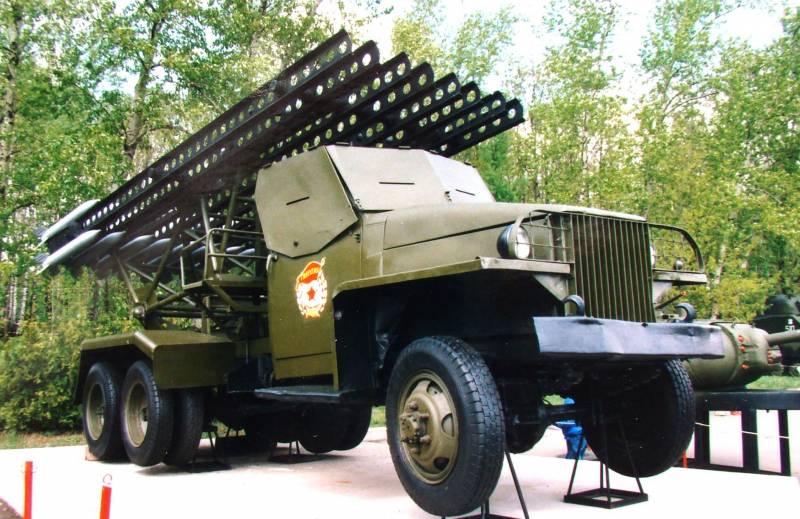 Katyusha at the Studebaker
The second is the 83rd mortar regiment, which later became the Zhitomir regiment. He was here, in Golovinsky-Mikhalkovo, not only formed, but then underwent replenishment, and also after the Battle of Stalingrad.

This regiment also has the Red Banner and its well-deserved order - Bohdan Khmelnitsky. The 83rd regiment was generally one of the special. For a long time he was armed not with classic Katyushas, ​​but with BM-8 rocket launchers, which were mounted on tanks T-60, only listed as medium, but in fact they were light.

Is that how they fight for memory?

The order on the formation of the Guards Mortar Regiments of the Artillery Reserve of the High Command was signed by Stalin on August 4, 1941, immediately after the first successes of the Katyusha. At first there were eight regiments, for M-8 and M-13 shells, and they were kept secret as best they could. Then it came to several dozen.

Perhaps this is why another of the regiments, the 47th Guards Mortar, which in the same 1943 temporarily settled in the factory recreation center for re-formation, was a little less fortunate with memory. He, for example, still does not have his own page on the Internet, and, according to our information, there is no regimental museum. And even with a commemorative plaque, the 47th regiment was somehow unlucky.

We, Russians, are not yet very active in the war for memory unfolding almost all over the world, which is increasingly turning into a war with monuments. But we regularly and rightfully resent vandalism against military monuments. But sometimes they themselves are also not too delicate when it comes to their own memory.

Take a look at these pictures. It is unlikely that some of the unprepared readers will be able to make out the regalia and even the honorary name of the famous military unit on the second of them. Your author, not without effort and headache, but was able to guess that the regiment was once given the name Yasski, since he took part in the liberation of Iasi, a Romanian city almost on the border with Moldova. 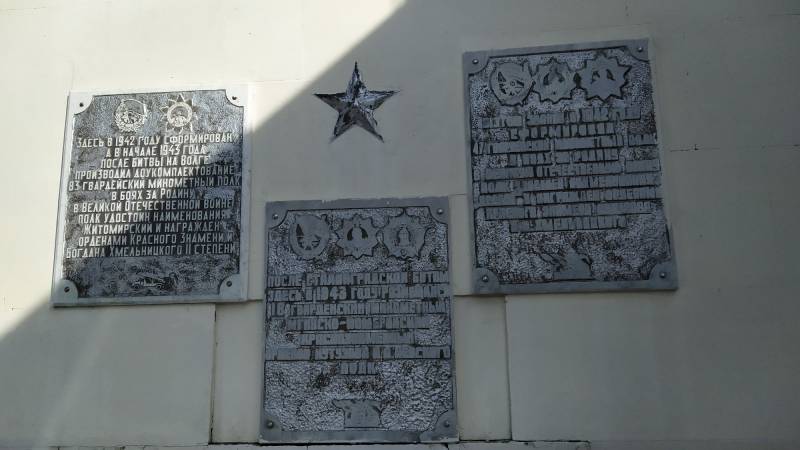 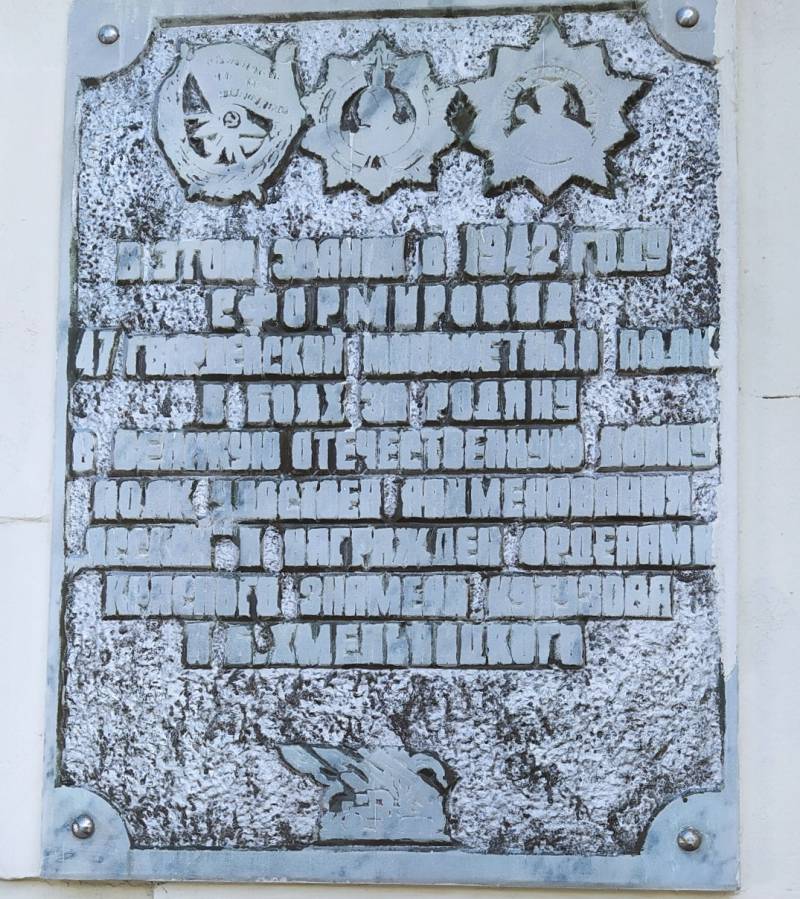 I'm not going to accuse anyone of anything, but when updating commemorative plaques, reviving memory, forgive me for the pathos, it would be nice to be at least careful. It looks like some primitive sandblasting has worked here, and here's the result. It would be necessary to be more careful somehow, it was not for nothing that the classic taught us this.

Please note that the commemorative plaque of the 18th regiment was also clearly “swept up”, but is still readable. Isn't it time now, in the year of the 75th anniversary of the Great Victory, which has not yet ended, to restore the memorial signs properly? Better by hand, and better if not indifferent guest workers do it.

That is why I would like to remind once again the episodes from the combat path of the 47th Guards Mortar Yassky Red Banner Orders of Kutuzov and Alexander Nevsky Regiment and the names of its commanders. The regiment also went through a terrible massacre in the Crimea, defending Sevastopol and fighting for Kerch. Then he was transferred directly to Stalingrad, to the legendary 62nd Army of General V. Chuikov.

There, at the end of 1942 and the beginning of 1943, the regiment was commanded by a major, and later by Lieutenant Colonel Vozhzhov Yevgeny Nikitovich. The regiment was taken from him by Major Maksimenko Fyodor Stepanovich, who also ended the war with the rank of lieutenant colonel, commanding the 32nd Guards Mortar Regiment. Well, the regiment came to victory under the command of the Hero of the Soviet Union, Lieutenant Colonel Anatoly Filippovich Kolomeitsev. 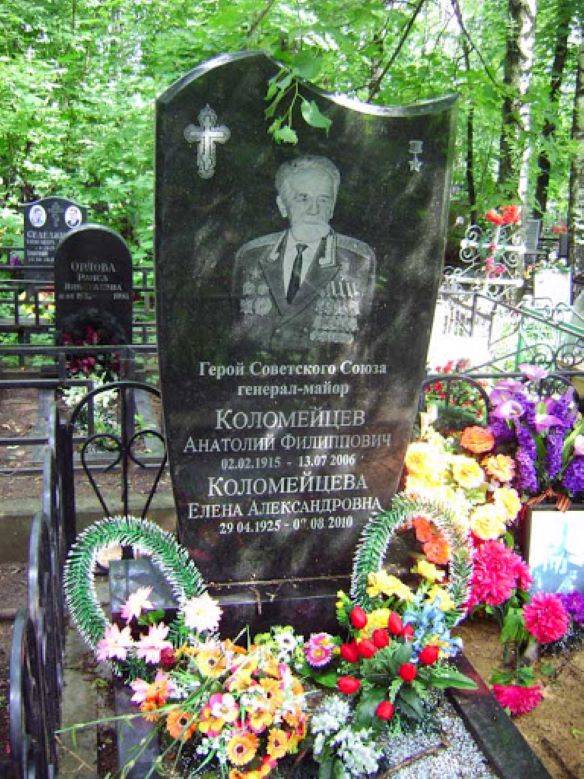 Ctrl Enter
Noticed oshЫbku Highlight text and press. Ctrl + Enter
We are
A great interview with Sergey Lavrov: about Ukraine, Obama and IranWhat you didn't want to know about England
32 comments
Information
Dear reader, to leave comments on the publication, you must to register.