Three versions of what happened: Kamchatka in the zone of ecological anomaly 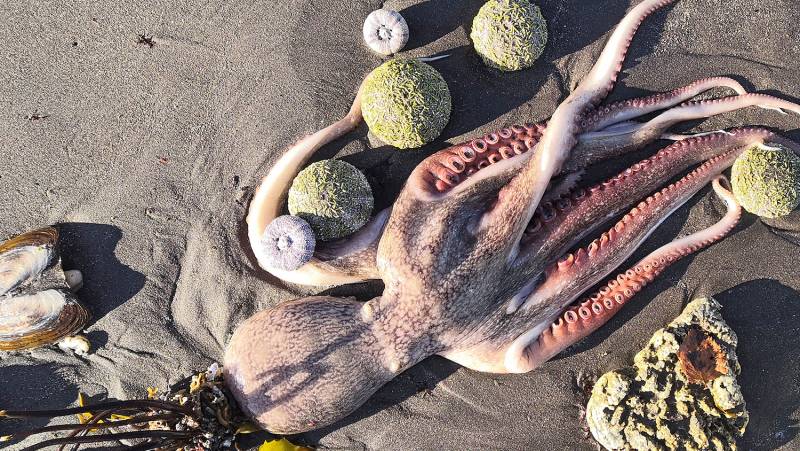 Dead sea animals were found by local surfers on October 2 on Khalaktyrsky beach, on Bolshaya and Malaya Lagernykh and in Babya Bay. All these objects are included in the Avachinsky Bay in Kamchatka. How long they lay there is unknown, but the sight was not for the faint of heart. Several hundred dead sea reptiles, fish and mammals dot the beach. The photographs instantly became a sensation on an almost world scale, and the initial results showed that the maximum concentration of oil products in coastal water was 3,6 times higher, and that of much more dangerous phenols - twice. Only now the analyzes were carried out not in a state accredited laboratory, but by local amateur chemists. To top it all off stories residents from nearby villages told about complaints of people swimming in the sea about pain in the eyes and a sore throat. Some doctors even diagnosed a burn of the cornea of ​​the eye. Surfers who inadvertently visited the waters of Khalaktyrsky Beach on October 2-3, additionally observed serious skin irritation.

After such a warm-up, it became clear to everyone that another environmental disaster with far-reaching consequences had occurred in Russia. How long has the tragedy with the oil spill in Norilsk passed? The world community and the liberal-minded public expected that officials were about to repent of their deeds, taking all the blame on themselves. The townsfolk and journalists quickly found the alleged culprit - a military facility on the Nalycheva River, which flows into the ill-fated Avacha Bay. But this time the officials of the region and especially the Kremlin kept silence: after all, Kamchatka is very far away, while the showdown is going on, a lot of time will run out. However, the very first official water samples showed the absence of critical concentrations of the most common chemical pollutants. For a deeper analysis, another group of samples of water, soil and tissues of dead animals were taken. 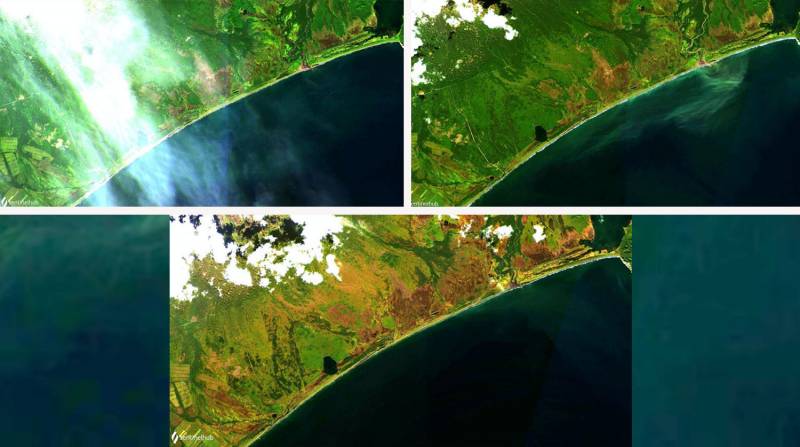 It was these pictures that alarmed the "green". Source: gazeta.ru
The materials had to be transported to Moscow: no suitable laboratory was found either in the Kamchatka Territory or in the Far Eastern Federal District. This is to the question of how quickly local authorities can react in such situations. Greenpeace activists added fuel to the fire in this vague story, seeing in the satellite images some dark green masses allegedly emerging from the mouth of the Nalychev River. This was enough for the "green" to make a final diagnosis - the disaster has man-made roots. In a situation of complete uncertainty, the words of tourists who managed to visit the "disaster zone" sound amazing. One of the tourists wrote on a blog:

We started from the place where the surfers' spot is. Nobody cleaned the beach, there are algae and shells lying around. But there is no ecological catastrophe even nearby. An absolutely standard look after a storm. There are no dead animals at all.
At the beginning of the week, scientists from the All-Russian Research Institute of Fisheries and Oceanography found dense yellow-brown and green deposits in the bottom of the Nalychev River, the genesis of which also cannot be determined on the spot. It is not known whether the analysis will be carried out on the basis of the All-Russian Research Institute or will again have to be sent by courier to Moscow.

Governor of the Kamchatka Territory Vladimir Solodov, speaking on Monday with an official statement on the incident in Avacha Bay, mentioned three versions being considered by the investigation. By the way, the Investigative Committee joined the search for the reasons, which in most cases still finds the perpetrators. According to the governor, the priority is still the version of man-made pollution that led to the mass mortality of the inhabitants of coastal waters. Such a high concentration of dead animals is explained by the storm that raged the day before the death. He could randomly concentrate dead aquatic organisms and throw them on the beach. At the same time, they could also die away from the coast at great depths. Most likely, in this case, without the storm, no one would know about anything: octopuses and other animals would decompose in the water column. It is worth remembering that some of them would inevitably become someone's food, thereby spreading possible toxins to higher animals. For many, an option for the development of a man-made version would be an inadvertent spill of some toxic agent into coastal waters. And the best option would be the military origin of the poison: they say, the Russians did not calculate their forces during the tests of a new chemical weapons... The second version, in the opinion of Governor Solodov, could be natural disasters that led to mass mortality of the inhabitants of the depths.

Eyewitnesses said that in addition to dead animals, there were a lot of brown algae on the coast. The high concentration of these organisms negatively affects marine animals. Firstly, certain brown algae can release toxins, and, secondly, they intensively consume oxygen dissolved in the waters. In both cases, this can lead to mass death of the living around. The storm may well have played a cruel joke in this incident as well. Moving huge masses of water can be accompanied by the release of toxic compounds. At least, this is what RAS scientists are talking about. There is no clarification on how this is possible, but it can be assumed that storms reveal some sources of toxins at the bottom. Perhaps not even natural sources, but quite technogenic origin. For example, containers of poisons that were barbarously disposed of years earlier. It is not at all necessary that the origin of these substances was Russian: the Pacific Ocean is large, many countries dump their waste there. Including Japan. For example, remember where the Japanese poured waste water from reactors in Fukushima. 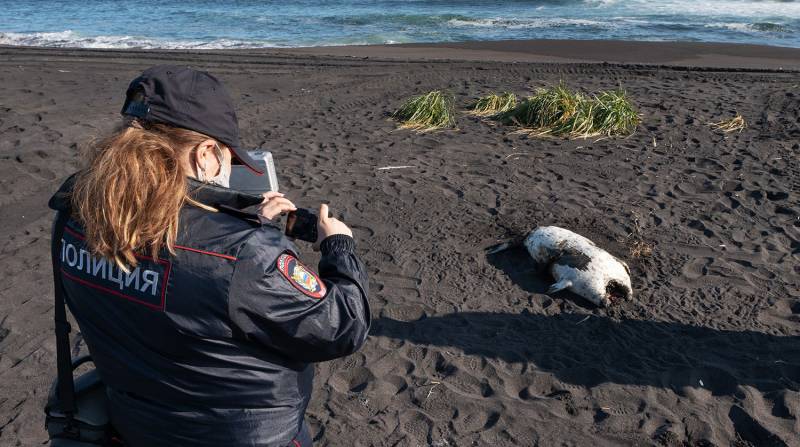 Source: gazeta.ru
And the third version of what happened. A few days earlier, a small earthquake was recorded in the surrounding area, quite possibly causing the poisoning of the living. In principle, in such a zone of seismic activity as Kamchatka, earthquakes have long been familiar, and fish do not die from them en masse. But they can provoke changes in the profile of the sea day, as well as the activation of small volcanoes. Not necessarily lava, it is enough to throw away the soluble content, which is slightly more modest than the content of the periodic table. The species diversity of the dead animals just indicates a deadly source somewhere at a depth closer to the bottom of the Sea of ​​Japan. Seismic activity could provoke the release from the earth's crust of certain substances not associated with volcanic activity, which were not even toxic to the living at first. And only under the influence of oxidation processes in the water column, they were transformed into poisons. After all, an earthquake could shake up perennial organic sediments at the bottom of the sea. When this organic matter was spread over the bottom part of the water area, it very quickly consumed all the dissolved oxygen for its own oxidation. This caused the mass death of living beings. Of course, the option is a bit fantastic, but there are no official results yet, it also has the right to be.

In any scenario, the bloated incident could not be transformed into a catastrophe. At the moment, the MPC is not exceeded for any chemical pollutant, there is not a single human victim, and the costs of liquidation relate only to the collection of dead animals. It is highly likely that due to such a rapid development of events, it will not be possible to determine the true cause at all. And the ecological tragedy will remain anomalies, the causes of which will invariably be blamed on government agencies.

Ctrl Enter
Noticed oshЫbku Highlight text and press. Ctrl + Enter
We are
Behind the finish line of the era of consumptionSituational analysis of the death of the MH17 flight (Malaysian Boeing 777), made on the basis of engineering analysis from 15.08.2014
68 comments
Information
Dear reader, to leave comments on the publication, you must to register.