Armenian defeat. How the Turkish army captured Kars and Alexandropol 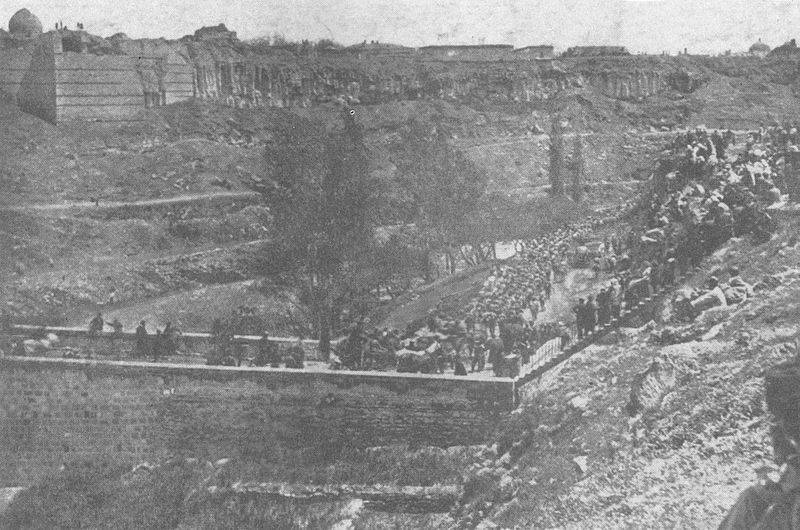 Ararat regiment is heading to the front. 1920

Armenia counted on the support of the Entente, primarily the United States. President Wilson invited Erivani to oppose the Kemalist Turkey, promising aid. Armenia was promised to include all historical land. The Armenian leadership has swallowed this bait.

On August 10, 1920, peace was signed in Sevres, France between the Entente countries and the Sultan's Turkey. According to him, Turkey became a semi-colony of the West. Its army was reduced to 50 thousand people, finances fell under Western control. Constantinople renounced all imperial possessions. They fell under the control of Britain, France and partly Italy. The European possessions of Turkey were transferred to Greece, as were some enclaves in Asia Minor. Even Turkey itself was dismembered: Kurdistan was allocated, part of the land was transferred to independent Armenia. The borders of Turkey and Armenia were to be determined by the American President Woodrow Wilson. Constantinople and the strait zone were given under international control. The Sultan's government was forced to recognize this shameful peace.

However, the Grand National Assembly in Ankara (Angor), headed by Mustafa Kemal, refused to recognize the Treaty of Sevres. The Kemalist government believed that in order to save Turkey, it was necessary to defeat the Greeks and Armenians, whose ambitions could destroy the Turkish statehood. Clashes in the Armenian-Turkish border zone have never stopped. In June 1920, Armenian troops took control of the city of Oltu and most of the Oltinsky district, which did not formally belong to Turkey, but was occupied by pro-Turkish formations (mainly Kurdish) and units of the Turkish army. From the point of view of the Turks, it was an Armenian invasion. In July, the Kemalists demanded that Erivan withdraw its troops. 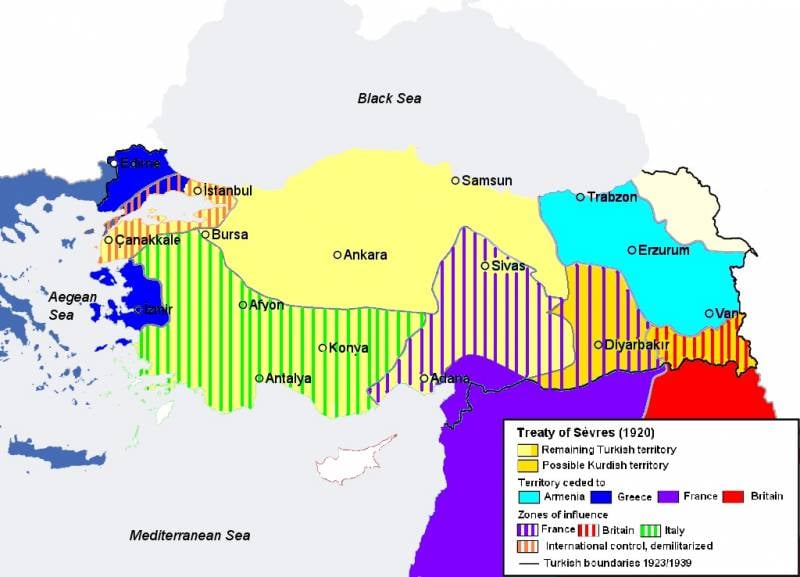 Partition of Turkey proposed under the Treaty of Sevres. Light yellow shows the territory that should have gone to Turkey, dark yellow - the territory of Kurdistan, blue - the territory that went to Armenia, blue - Greece. Areas of influence of Great Britain (red), France (lilac), Italy (green) and the international demilitarized zone of the straits are shaded
Moscow's position played an important role in these events. The Bolsheviks planned to restore their power in the Transcaucasus. To do this, it was necessary to weaken and destroy the power of the Armenian nationalists (Dashnaktsutyun). Also, the Bolsheviks did not want to see Armenia under the "wing" of the West, the United States. In addition, unexpectedly, Russia and Turkey found themselves in the same camp offended by the Entente. Russia and then Turkey were subjected to Western intervention. Constantinople and the straits under the control of Britain and France - such a prospect did not please the Russians. Thus, the Russians and the Turks temporarily became allies. The Kemalists reacted favorably to the Sovietization of Azerbaijan, which was previously part of the Turkish sphere of influence. They even provided all possible assistance in this matter. Kemalist Turkey helped the 11th Soviet army take control of Nakhichevan in late July - early August 1920. Moscow first held unofficial negotiations with Kemal (through Khalil Pasha), and then established official contact with the National Assembly. The Soviet government decided to support the Kemalists with finances (gold), weapons and ammunition.

Armenia counted on the support of the Entente, primarily the United States. Wilson invited Erivani to oppose the Kemalist Turkey, promising aid with weapons, ammunition, equipment and food. Armenia was promised to include all historical lands in its composition. The Armenians have swallowed this bait. At the same time, the Armenians had no allies in the South Caucasus. It was not possible to come to an agreement with Moscow. Georgia took a coldly neutral position. The 30-strong Armenian army was exhausted by years of bloody battles and did not have reliable logistic support. The economy of the republic was in ruins. The Armenian political leadership clearly underestimated the enemy, hoping that the collapse of the Ottoman Empire would become the foundation for the creation of "Great Armenia". Their own forces and means were overestimated, as were the hopes that "the West will help." The United States and the Entente provided a small amount of weapons and a small loan.

On November 22, 1920, the American President signed and certified the arbitration award on the border between Armenia and Turkey. Armenia was to receive parts of the provinces of Van, Bitlis, Erzurum and Trebizond (a total of over 103 thousand sq. Km). The new Armenian state was supposed to have an area of ​​more than 150 thousand square meters. km and got access to the Black Sea (Trebizond). But this decision did not matter, since it was not confirmed by force. 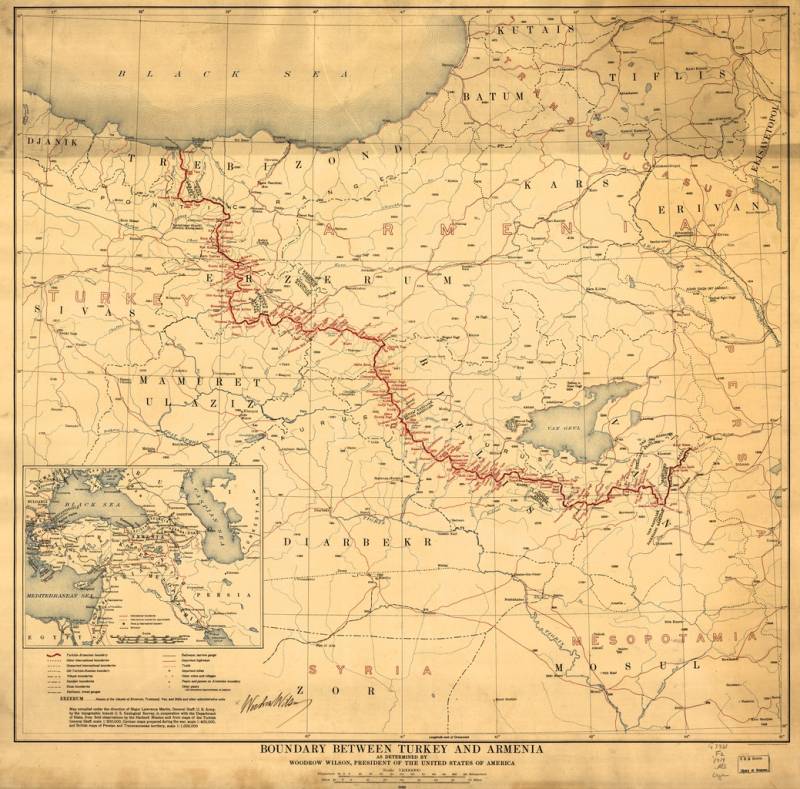 The border between Turkey and Armenia, defined by US President Woodrow Wilson

In June 1920, the Turks mobilized in the eastern vilayets (provinces). the 50-strong Eastern Army was formed under the command of Lieutenant General Kazim Pasha Karabekir. Also, the Turks were subordinate to numerous irregular formations. Even in the conditions of the successful offensive of the Greek army in the west of Anatolia, the Kemalists did not weaken the eastern direction. On September 8, Ankara hosted a meeting of the Supreme Military Council with the participation of General Karabekir, who proposed starting an operation against Armenia. The Kemalists held talks with Tiflis and received confirmation of Georgia's neutrality.

In the first half of September 1920, Turkish troops recaptured Olta. Large-scale hostilities began on September 20. On September 22, Armenian troops launched an offensive in the Bardiz area, but ran into strong enemy resistance and suffered heavy losses. On the 24th, the Armenians retreated to Sarakamish. On the 28th, the Turkish army, having a significant numerical superiority and better support, went on the offensive in several directions. On September 29, the Turks took Sarikamysh, Kagyzman, on the 30th the Armenians left Merden. The Kemalists went to Igdir. The Turkish offensive has traditionally been accompanied by the massacre of local Christians. Those who did not have time or did not want to flee died. All in two months of fighting, 200-250 thousand civilians were killed. A few days later, the Turkish offensive ran out of steam, and a two-week lull set in. Meanwhile, under the guise of war, the Georgians tried to occupy the disputed lands in the Ardahan District. This distracted part of the forces of Armenia.

In early October 1920, Erivan asked for diplomatic support from the Entente. The West ignored this request. Only Greece tried to increase pressure on the Kemalists in Anatolia, but this did not help Armenia. The Americans did not provide the promised assistance to the Armenian Republic. On October 13, 1920, the Armenian army tried to launch a counteroffensive in the Kars direction, but the forces were insufficient. At the same time, the Armenian troops were partially demoralized by rumors of a Russian-Turkish alliance. The number of deserters grew. At the end of October 1920, the Turkish army resumed its offensive. Ardahan fell on October 29. The Turks occupied the southern part of the Ardahan district and on October 30 they took Kars quite easily, capturing about 3 thousand people. The Kemalists staged a massacre in the city, destroyed a monument to Russian soldiers. The Armenian troops were demoralized and retreated indiscriminately. A few days later, the Turks came to the river. Arpachai threatening Alexandropol. On November 3, the Armenian authorities proposed an armistice. The Turkish command set conditions: the surrender of Alexandropol, control over the railways and bridges in the area, the withdrawal of Armenian troops 15 km from the river. Arpachai. The Armenians have fulfilled these conditions. On November 7, the Turks occupied Alexandropol. 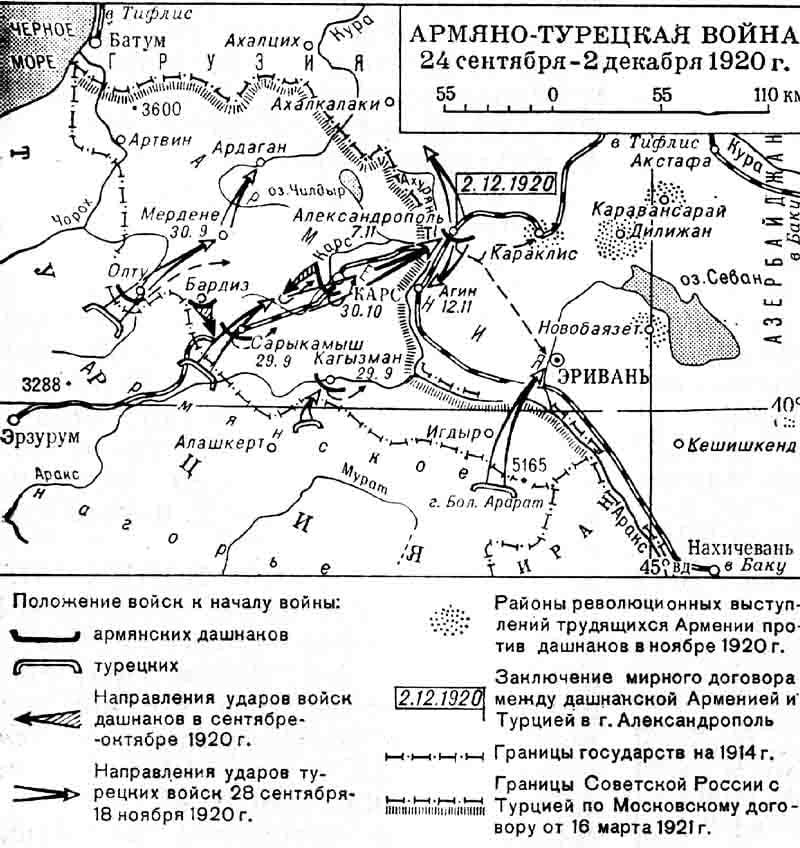 General of Karabekir set even harsher conditions: disarmament of the Armenian army, further withdrawal of forces to the east. In essence, it was an offer of unconditional surrender. The Armenian parliament at an emergency meeting rejected these demands and decided to ask Moscow for mediation. On November 11, Turkish troops continued their offensive, pushing the enemy along the line of the Alexandropol-Karaklis railway. The Armenian army has lost its combat effectiveness. The troops were completely demoralized, the soldiers fled en masse. On November 12, the Turks occupied the Agin station and began to threaten Erivan. At the same time, the Turkish army began to attack on the Erivan direction from Igdir. In mid-November, the Kemalists launched an offensive in the Nakhichevan direction.

As a result, Armenia lost the ability to wage war. The army collapsed. People fled east. Only the region of the capital and Lake Sevan remained free. The question arose about the existence of the Armenian statehood and the Armenian people in general. Meanwhile, Georgian troops occupied the entire disputed area of ​​Lori. In gratitude for the neutrality, the Kemalists gave Tiflis guarantees of territorial integrity.

On November 15, 1920, Armenia asked the Kemalist government to start peace negotiations. On November 18, a truce was concluded for 10 days, then it was extended until December 5. The defeated Armenian nationalists could no longer resist either Ankara or Moscow. At the request of the Kemalists, the Armenian authorities abandoned the Sevres agreement. On December 2, peace was signed in Alexandropol. Kars and Surmalinsky district (over 20 thousand sq. Km) were transferred to the Turks. Theoretically, a plebiscite could be held in these areas on their belonging, but its result was a foregone conclusion. Karabakh and Nakhichevan passed under the Turkish mandate until the final decision on their status. The Dashnaks agreed to abandon military service, to reduce the army to 1,5 thousand people with several guns. Erivan withdrew its delegations from the United States and Europe, pledged to remove from the system of public administration all persons noticed in anti-Turkish activities and rhetoric. Erivan was supposed to annul all agreements that hurt Turkey. The Turks received the right to control the railways of Armenia, to take military measures on its territory. The occupation of the Alexandropol district could be maintained indefinitely. In fact, the rest of Armenia turned into a vassal of Turkey.

At the same time, the Dashnaks signed an agreement with Moscow on the establishment of Soviet power in Armenia. On December 4, 1920, the Red Army entered Erivan. The Sovietization of Armenia passed swiftly and without serious resistance. Armenia returned to the northern state. Soviet Russia refused to recognize the Treaty of Alexandropol and annulled it. In February-March 1921, Turkey and Russia resolved the Armenian issue in Moscow. The Soviet government decided that the port of Batum was more important than Kars. On March 16, 1921, the Moscow Treaty was signed. Turkey transferred the northern part of the Batumi region to the Georgian SSR; Armenia - Alexandropol and the eastern part of the Alexandropol district; Azerbaijan - Nakhichevan and Sharuro-Daralagez districts. The southern part of the Batumi region (Artvinsky district), Kars, the Surmalinsky district of the Erivan province and the western part of the Alexandropol district remained within Turkey. That is, Turkey received a number of territories that the Russian Empire recaptured from the Ottomans. This was another of the sad results of the Russian turmoil.

Ctrl Enter
Noticed oshЫbku Highlight text and press. Ctrl + Enter
We are
Versailles who did not bring peaceEnglish agents against Field Marshal Kutuzov
69 comments
Information
Dear reader, to leave comments on the publication, you must to register.