Kyrgyzstan. What was prepared for Belarus 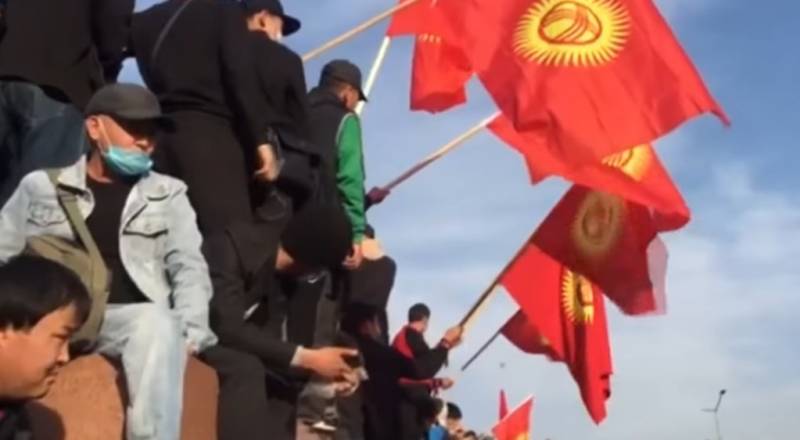 Several readers wrote me angry letters about the fact that I did not warn the public about the unrest in Kyrgyzstan. Others wrote that the events in Kyrgyzstan came as a surprise to everyone, including Moscow. I will just mention in passing about a couple of "independents" who told me that the riots began on Kievskaya Street in Kyrgyz Bishkek and that the Kyrgyz are as freedom-loving as the Ukrainians.


Indeed, events today are developing at such a speed that forecasts become reality before the materials in the press on this issue are forgotten. An excellent example is the events in Belarus and Nagorno-Karabakh. Analytics on these events can be read today without getting into the deep legends of antiquity. Do you remember how some "experts" chuckled about the organizers of the riots from the Polish special services? Today, when this has become a fact, none of these experts "remember" their grins.

To begin with, I will answer the most important question that worries most readers today. Belarus, Kyrgyzstan, next where? And when to expect these events? In my opinion, the next "outbreak of popular anger" will occur on the night of November 1 to 2, 2020. And this will happen in Chisinau. Another such outbreak is very possible in February 2021 in Kazakhstan. It is in these regions that Western NGOs are most active now.

"Unexpected" performances of the Kirghiz

The election campaign, whatever level it may be, activates the country's political elite. If the pro-government parties and those close to the pro-government ones work without haste, in a blind confidence that the power resource is sufficient for victory, those who have no chance of winning are preparing “popular indignation”. So it was in Belarus and so it was in Kyrgyzstan.

The scheme of actions is quite simple. Schematically, it looks like this. Immediately after the end of the elections, it is necessary to take to the streets at least some number of people dissatisfied with the elections. For this purpose, a core of protests is being formed. Remember the first day of the protest in Minsk? In reality, two tens of thousands of people took to the streets, but with the help of "special effects" and massive processing via the Internet, they turned at first into hundreds of thousands, and then into millions. Moreover, even the Belarusians themselves wondered where so many protesters came from.

Further, everything is even easier. We throw in the "real results" of the elections, which were presented by unnamed members of the election commissions, and that's it. The crowd seethed. Ask in the crowd who will "roll" which of them voted for Putin. Nobody! Although, as it seems to me, there are still such. But it's scary to say this in a crowd. You will immediately become an outcast, otherwise you will get in the face.

The continuation is also known. Forceful seizure of parliament, declaring the current government as enemies of the people and establishing a dictatorship of an active minority. With "Yulia, Yulia ..." in a wheelchair in front of the people, with open jail cells and released "political prisoners" with several criminal offenses behind their shoulders ... It's easy to speculate about everything that will happen next. It is enough to look at Ukraine.

But let's get back to the "unexpected events" in Kyrgyzstan. Indeed, reading the press of August-September. you are amazed at the almost complete absence of a realistic picture among experts and political scientists in Kyrgyzstan. The overwhelming majority is confident that nothing out of the ordinary will happen in Bishkek. I even contacted one such specialist. “What kind of revolution? We shed so much blood during our revolutions that today no one will go to the streets for the victory of some politicians ”.

Here is the opinion of political scientist Bakyt Beketayev, expressed in an interview with Sputnik radio:

Undoubtedly, after the events in Belarus our opposition received a certain drive, hence the concern in society. This fuse of protest moods will obviously play its role both during the voting and after the elections - there will always be those dissatisfied with the result, and the opposition will also try to collect dividends on this. But despite this, I think that after the elections the situation will be stable. The fact is that, unlike the Belarusians, we have already passed the stage of revolutions and today people know what the post-coup period threatens - irreparable damage to business, economic decline, and so on.
I perfectly understand "civilian" political scientists. It's scary when blood will be spilled on the streets again. The representatives of the special services do not have such a privilege of fear. As there is no possibility of passing off personal desires as objective information. That is why the opinion of Artur Medetbekov, a former employee of the special services of Kyrgyzstan, ex-deputy chairman of the State Committee for National Security of Kyrgyzstan, Artur Medetbekov, is much more interesting to me:

The risk of protest actions is not excluded due to the fact that at the elections there may be a massive bribery of the electorate. We can all see that the coronavirus situation has severely weakened the economy, and it is clear that people need finance, especially the poor and the middle class. Accordingly, there are many who will try to take advantage of this and bribe voters. Therefore, the result may be dissatisfaction with the election results, which will result in protest actions. Unfortunately, Kyrgyzstan has not yet reached the level of culture for holding such large-scale events as in Belarus.
Note that this was said long before the elections. The opinion of such an informed person, and even expressed publicly, could not remain a secret for the government and the president of Kyrgyzstan. Hence a simple question for the government of Kyrgyzstan. Why did the government allow the defeat of state bodies and a violent change of power in Bishkek and other cities? Why did they treat the security forces the same as in Kiev in 2014?

Why is Kyrgyzstan boiling

I apologize to the readers, but I will not talk about the programs of political parties participating in the elections. To anyone interested, they may well be able to find these parties in the media. But it is worth talking about the balance of power that happened after the elections.

For those who read the materials on the headings and first paragraphs, I will say that nothing unexpected happened during the elections. Those who were supposed to go to the parliament (Jogorku Kesh) of Kyrgyzstan went there. And those who participated in order to then sign the articles "former candidate for deputy" flew by. The parties "Birimdik" and "Mekenim Kyrgyzstan" won. They made up the pro-government majority.

The same thing happened that happened in Belarus. The pro-Western parties suffered a crushing defeat. Now there is almost no pro-American lobby in the Kyrgyz parliament. The opposition flew out of power into the street with a bang. But if you take a closer look at the new composition of parliament, the situation will remind you of the Russian 90s. The number of criminal deputies is off scale ...

Why are the people dissatisfied? I call this the "Russian electoral syndrome." Remember the deputies who wander from one convocation to another, while the electorate, you and I, fire them in the tail and in the mane? I voted for the party's list, in which the great doctor, courageous man Ivanov was in the first place. The second is the great physicist Petrov. On the third - the hero of the last war Sidorov.

And after the elections, it turned out that they all decided to continue working as a doctor, physicist and military leader. And those for whom I did not want to vote went to parliament. Those who gave a little money for campaigning, who are the son, brother, matchmaker of the party leader ... And these idiots will sit in the Duma simply because I cannot withdraw my vote or I don’t want to ...

The same thing happened in the Jogorku Kesh (hereinafter LCD. - Ed.). Comparing the lists of deputies is easier than ours. A total of 120 people. Almost two thirds of them are veterans, representatives of the past. It's just that the certificates will be not the 6th, but the 7th convocation of the JK.

An interesting fact that angered the opposition on the street. This is the passage in the LCD of the party "Butun Kyrgyzstan". The fact is that on October 4 this party was first removed from the elections by the CEC, and then returned to the lists by a court decision. This despite the fact that 16 parties participated.

Following the election results, the alignment of the parties is as follows. 23,85% - the party "Mekenim Kyrgyzstan" ("Motherland Kyrgyzstan"), 23,54% - the party "Birimdik" ("Unity"), 9,32% - the party "Kyrgyzstan", 7,1% - the party "Butun" Kyrgyzstan ”(“ United Kyrgyzstan ”). Officially, the opposition is just "Butun". Although in the last pre-election days there were decent differences between Mekenim and Birimdik. Judging by the almost fight in the debate ...

It seems to me that such a quick reaction of the opposition followed because, in my opinion, it made the wrong conclusion about the alliance between Mekenim Kyrgyzstan and Birimdik. If this happens, a parliamentary majority will be formed in this way.

However, I believe that party leaders are not ready for an alliance. In the current situation, one should rather look at those "kids" who will be supported by the giant parties. But even in this case, the majority will be unstable. The opponents will be roughly equal in strength.

Now events are developing rapidly. The opposition occupied the parliament building and a number of government buildings. The leaders of the Mekenim party were arrested. A coal mining enterprise has been seized by unknown persons. According to my information, the Kyrgyzkomur enterprise was seized by the thief in law Sayak, in the world M. Kadyrkulov. More than half a million soms have disappeared from the cash register.

Earlier, a gold processing enterprise was seized. Who is still unknown. This is the only refinery in the country that refines gold. It is located in Kara-Balta.

A commandant has been appointed in Bishkek. It was Kursan Asanov, who is also acting Minister of Internal Affairs. In short, every minute there are messages about the next actions of the opposition.

It seems to me that now the goal of everyone, both winners and losers, is to appoint a new prime minister. This means a new government. This will largely determine the country's course for the coming years.

Today in Kyrgyzstan we see the scenario that was prepared for Belarus. At the time of this writing, the opposition has already elected a new prime minister at a meeting in the Dustuk hotel. It was Sadyr Japarov. Acting Prime Minister Kubatbek Boronov, under pressure from the opposition, resigned. The police went over to the side of the rebels and are now working together with the people's militias.

And what about the president? The President plays his part:

Last night, some political forces tried to illegally seize state power. Using the election results as a pretext, they disrupted public order. They disrupted the peaceful life of the townspeople. They disobeyed law enforcement officers, beat doctors and damaged buildings ...
Calmness in the state, stability of society are more valuable than any deputy mandate ... I urge the leaders of political parties to calm down their supporters and take them away from their places of concentration. I call on all my compatriots to keep the peace and not give in to the calls of the provocative forces.
What will happen next?..

Ctrl Enter
Noticed oshЫbku Highlight text and press. Ctrl + Enter
We are
Situational analysis of the death of the MH17 flight (Malaysian Boeing 777), made on the basis of engineering analysis from 15.08.2014Results of the week. “In our cooperative, the board is always agreed”
192 comments
Information
Dear reader, to leave comments on the publication, you must to register.