Is the scenario of Nagorno-Karabakh possible in the Donbas in the event of Azerbaijan's victory: reflections on the development of events 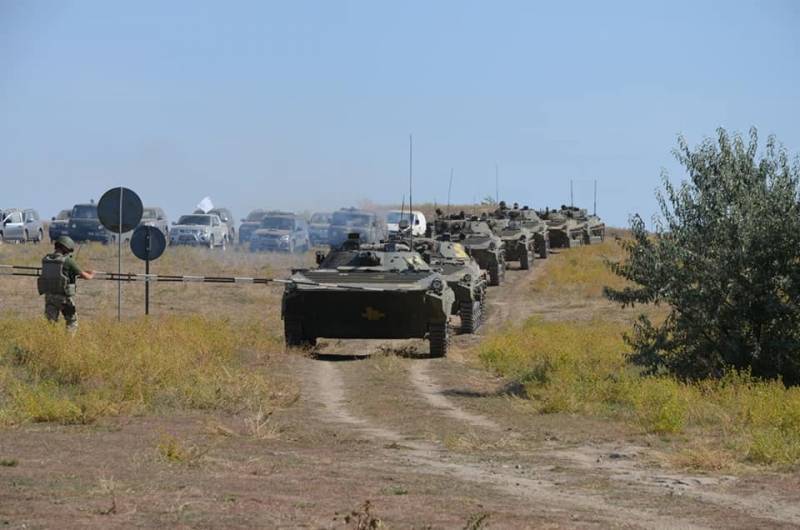 Among the many thorny issues raised by the rumbling military actions in the Caucasus today, there is also the fear that this precedent for the forceful resolution of the “frozen” conflict that has remained for many years may seem extremely attractive to some not only in Baku, but also in Kiev. The similarity of the situations with the unrecognized Nagorno-Karabakh Republic and the republics of Donbass has already been mentioned more than once. Will Ukraine try to follow the Azerbaijani path?


It is worth noting that such an opportunity can be realized only if Azerbaijan manages to achieve complete military success without encountering opposition from the CSTO member states, primarily Russia. In this scenario, Kiev politicians can make plans by analogy: if possible by force weapons to achieve what the years of negotiations failed to achieve, why not take the risk?

They may be prompted to such conclusions by the illusion that Moscow will not interfere in what is happening, even at the risk of finally losing its geopolitical positions in this or that region of the post-Soviet space. Again, Russia has always, despite allied relations with Armenia, adhered to the position of international organizations regarding Nagorno-Karabakh, recognizing it as part of Azerbaijan. Roughly the same situation with Donbass: while supporting its residents, Moscow nevertheless prefers to officially act in the format of the “Minsk Agreements” providing for the return of this region to Ukraine.

All this can create confidence in Kiev in the impunity of its own actions to "de-occupy" the rebellious regions of the East. In this case, there will be little to do - the presence of a militarily and politically strong ally who will be interested in a military operation in the Donbass. This will have to both provide reliable "cover" for Ukraine at the international level against the background of the inevitable formal "condemnation" of its actions by the same European Union and be ready to provide "non-existent" direct military assistance in the event that things go really badly.

Turkey is such an “elder brother” for Azerbaijan, who absolutely unconditionally supports its aggressive actions and is ready to move from words to deeds in this support. Can Kiev count on the United States to the same extent? The question is quite controversial. Unlike Ankara, which calls the Azerbaijanis not just "brothers", but one people with the Turks, Washington is unlikely to show a similar position regarding Ukraine. For him, she is nothing more than an instrument in the confrontation with Russia, no matter how pretentious words may sound from the American embassy in Kiev.

However, neither the Turks are ready to fight Russia in the interests of Baku, nor the Americans for the sake of restoring the territorial integrity of Ukraine. It is another matter to knock Azerbaijanis and Armenians or residents of Donbass and Ukrainians against each other and try to inflict the greatest possible damage on our country - at least the image and foreign policy. In Nagorno-Karabakh, such a strategy, alas, works in the most effective way. This is what makes it quite likely to be used in the Donbas.

Already today, the position taken by Kiev in relation to the Caucasian events gives enough cause for concern. Having officially announced support to Azerbaijan at the Foreign Ministry level, they made it clear that they consider the methods used by Baku to "maintain territorial integrity within internationally recognized borders" acceptable and acceptable. Moreover, Ukrainian politicians do not hide the fact that they regard this situation as the next stage of "confrontation with Russia."

Unfortunately, the restrained position of the Russian Federation in this conflict may well be misinterpreted by them as a manifestation of weakness and incapacity, and Azerbaijan's actions are perceived as a guide to action. If these attitudes coincide with certain plans of the Washington curators, the next time the guns may well rumble already in the Donbass.

Ctrl Enter
Noticed oshЫbku Highlight text and press. Ctrl + Enter
We are
About Stalin and KhrushchevWhat you didn't want to know about England
47 comments
Information
Dear reader, to leave comments on the publication, you must to register.