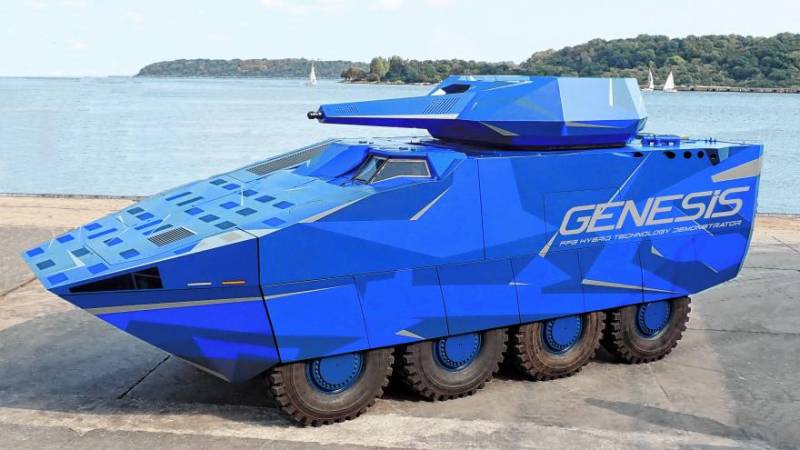 The German company Flensburger Fahrzeugbau Gesellschaft mbH (FFG) presented its new development - the Genesis diesel-electric armored vehicle. In this initiative project, the main ways of developing land wheeled platforms are being worked out, suitable for creating samples for various purposes.

FFG reports that the development of the Genesis project has been going on since 2018 and has achieved some success to date. In particular, the first prototype was built. Its first public screening was due to take place during Eurosatory 2020 this summer - but the event was canceled and FFG had to rethink its plans.

On September 22-23, the Bundeswehr ground forces held a conference on the preservation and development of small and medium-sized enterprises by the defense industry. The venue for the event was provided by the FFG plant in Flensburg. Within the framework of the conference, various reports were made, and the participating organizations showed their new developments. One of them was the FFG Genesis prototype.

FFG specialists revealed the main features of the new project, announced the characteristics and capabilities of the promising machine. In addition, they talked about their plans. So, already this fall, the prototype goes to full-scale tests, during which the original power plant will be tested and fine-tuned. The manufacturer calls it a hybrid, but in fact it is an electric powertrain. 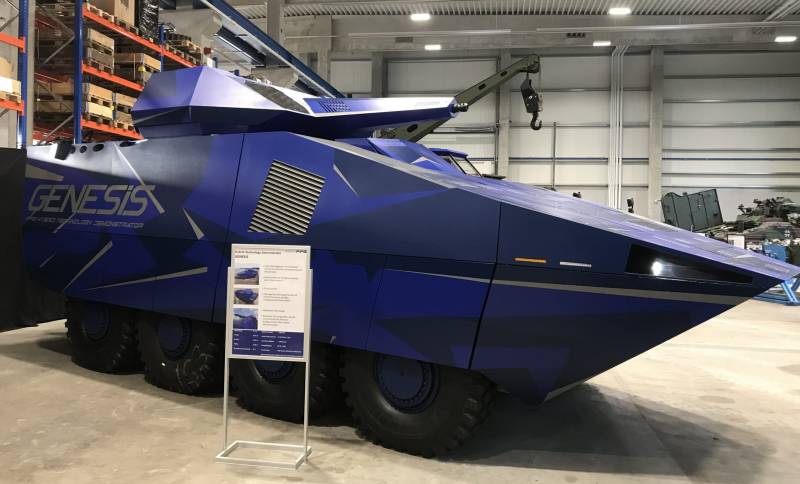 In the proposed form, the FFG Genesis product is a four-axle wheeled armored vehicle with the ability to install various equipment to solve certain problems. So, the prototype is made in the configuration of an armored personnel carrier with a cannon-machine gun combat module - while it serves as a demonstration model.

By analogy with the GTK Boxer project, a modular machine architecture is used. There is a universal wheeled chassis on which various load modules and fighting compartments can be mounted. For obvious reasons, the chassis module and its components are of the greatest interest in the Genesis project - this will also be the main focus of subsequent events.

The experimental machine has characteristic contours formed by large intersecting planes. In addition, bright colors are used. Noteworthy is the elongated wedge-shaped nose of the body with a large upper frontal sheet. The hull is distinguished by its high height, providing significant volumes for accommodating the necessary units and crew jobs. In the presented form, the central and aft parts of the hull accommodate the troop compartment.

The main elements of the "hybrid" power plant are located in the nose of the hull. There is a 1368 kW diesel generator and a battery for energy storage. The engine compartment is isolated from the manned volumes, which reduces the risks for the crew in case of damage. The power plant supplies current to travel electric motors and other onboard consumers. The possibility of using the armored vehicle as a "charging station" is declared. 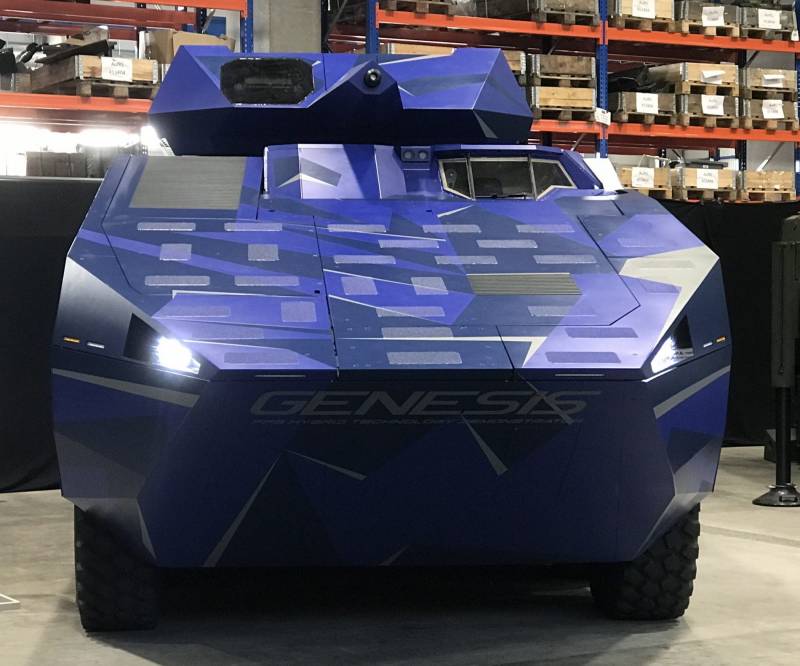 Responsible for the movement are eight electric motors placed inside the housing and connected to their own axle shafts. Each wheel has its own drive and individual suspension. Such a power plant develops more than 15600 Nm of torque on the wheel. When driving, the engine can act as a generator and help charge the batteries. In case of damage, the axle shaft is transferred to free wheeling.

The power and power plant can operate in two modes. The first uses a diesel generator and semi-axle motors; the second provides for the power supply of electric motors from batteries. First of all, it reduces the noise level and the likelihood of detection.

The driver controls the diesel unit and the propulsion motors exclusively using fly-by-wire control systems. Some of the processes are automated. There is no steering gear in the undercarriage of the machine - maneuvering is carried out by changing the revolutions on the wheels of different sides.

Genesis's own crew in an armored personnel carrier configuration includes two people with placement in front of the crew compartment. The troop compartment with aft ramp and upper hatches can accommodate up to 10 people.

The presented prototype received a DBM from the Kongsberg company. It carries a 30 mm cannon and a 7,62 mm machine gun, as well as optoelectronic observation and guidance devices. The module is allegedly not fully connected yet and is acting as a breadboard. 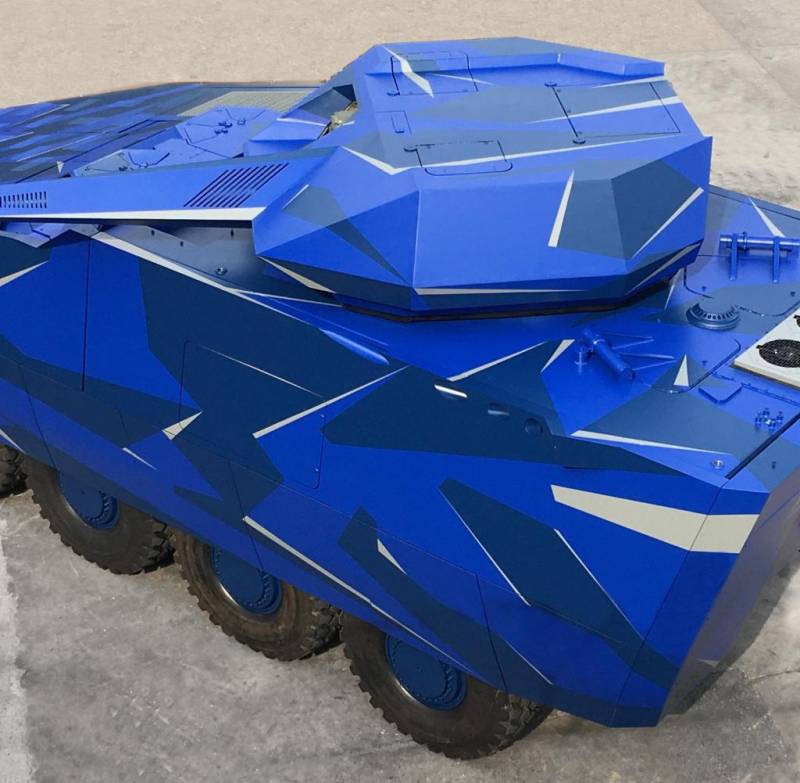 The length of the armored vehicle reaches 8,25 m, width - 2,25 m. The height depends on the type of module installed. The prototype armored personnel carrier has a height of 2,4 m. The maximum permissible weight is 40 tons.

Quite high driving characteristics are declared; in this regard, Genesis should not be inferior to other modern technology. The maximum speed on the highway, according to calculations, will exceed 100 km / h. The power reserve when using a diesel generator is 600 km at a speed of 60 km / h. The accumulators will allow you to travel 150 km at 40 km / h. Swimming is not possible.

The FFG Genesis armored personnel carrier is still considered as a platform for developing new technologies and solutions, incl. developed by FFG independently. Successful testing and fine-tuning will allow you to change the project taking into account further advancement in the market or create new models of armored vehicles on its basis.

A finished sample that has passed all the stages of revision, it is said, will have a number of important advantages over technology with internal combustion engines. Full electric propulsion improves speed, agility and dynamics of the chassis. In addition, it is possible to move quietly without using a motor. The presence of a powerful diesel generator expands the possibilities for the integration of specialized electrical equipment. 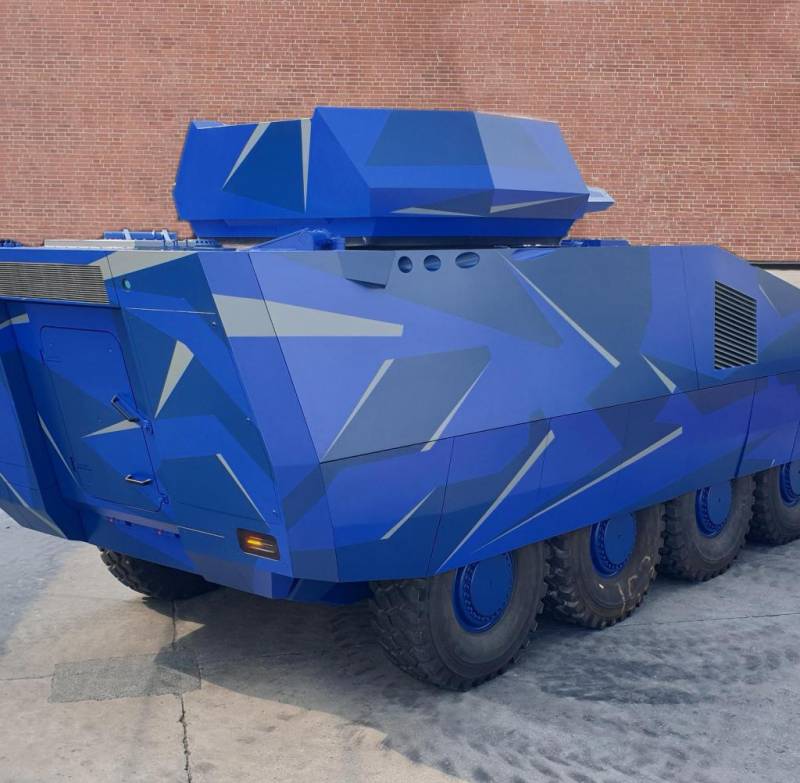 The proposed architecture of the power plant allows for fairly simple scaling. Based on the existing prototype with an 8x8 chassis, they can create unified 6x6 or 4x4 machines - depending on the wishes of the customer. All these samples can receive one or another equipment corresponding to the assigned tasks.

Full-scale testing of the Genesis prototype is due to begin this fall. They will show how successful the prototype is, and will also allow you to assess the future of the project as a whole. It is not known how soon all the necessary measures will be completed. The overall complexity of the project, the limited capacity of the FFG, and other factors, including the ongoing pandemic, could negatively impact the progress and timing of the project.

Successful completion of the project will bring the finished sample to the market, but its commercial prospects will remain uncertain. Despite the obvious advantages, armored vehicles with an electric transmission or a hybrid power plant have significant drawbacks, because of which they are not very popular among the armies. An FFG Genesis product, once it hits the market, can gain the specific status of an interesting and advanced development with no future.

However, the development company is optimistic and intends to complete the development work. So far, the main task is to test and fine-tune the structure. How they will end, and whether the project will be able to meet the expectations of its creators, time will tell.