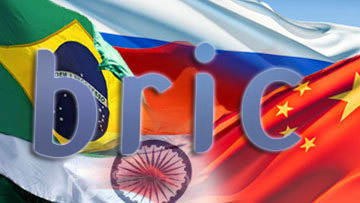 In recent years, foreign policy luminaries promoted the idea that America’s domination days have come to an end, and a new world order is emerging, in which power will no longer be concentrated solely in Washington’s hands, but distributed among several different states. They noted that the United States will continue to occupy a prominent position at the very top of the global food chain, but the sensations of America’s global hegemony will disappear. Instead, their rightful place among the great powers will be taken by the young states - Brazil, Russia, India and China (the so-called BRIC countries) - which, step by step, will lead to the formation of a new multi-polar world.

Perhaps this is a bit different from what European supporters of a multipolar world meant when they were in favor of dispersing world power soon after America invaded Iraq in 2003. But, despite the presence of modern weapons, the two millionth, in the aggregate, army and general economic well-being, Europe is under the influence of a number of weakening factors. Not the last of these is the lack of a unified army, the prospect of which today seems to be no closer than in 1998, when Jacques Chirac and Tony Blair came to Saint-Malo to an agreement that paved the way for the creation of a common European defense system. The BRIC countries have three common features - each of them is very large both in terms of area and in terms of population, the economy of each country is developing, and each of them is conducting military modernization aimed at preserving their strategic interests. While the strongest countries of Europe are reducing defense spending, and the US military budget is unlikely to increase in the coming years, these four countries are striving to assert themselves on the world stage and are willing and able to invest in increasing their military power.

The Brazilian economy continues to grow, and despite a slight setback during the global economic crisis of 2009, it is expected that this year’s growth will be 7,5 percent. With the growth of the Brazilian economy, government officials are becoming increasingly aware that large-scale military modernization is highly advisable if Brazil is going to somehow reinforce its claims to hydrocarbon fields beyond its traditional offshore border and get a permanent seat on the UN Security Council. Fitting the role of the leading South American power - both in the diplomatic sphere and with the help of a mild demonstration of military power - can be of great importance for Brasilia to achieve these goals.

Since 2005, the Brazilian defense budget has grown annually by 5 percent, and in 2008, the government approved a new national defense policy, allocating billions of dollars to the 70 army. Among the new technology should be 50 medium helicopters Eurocopter EC 725 Cougar, unmanned aircraft, anti-tank weapons and a new family of armored vehicles from IVECO, which was named Urutu III.

Brazil also has long-term plans for marine expansion, which are of great interest to the French and British defense enterprises. The French sell Brazil four conventional Scorpene type submarines, while the British are seeking access to one of the fastest growing military markets in the world by signing a contract for the purchase of a frigate Type-26 from BAE Systems, which is at the design stage, with Brasilia. The predictable choice of a winner in a multi-billion dollar tender for the purchase of new generation fighter jets on the F-X2 program will open up the opportunity for the Brazilian air force to acquire 36 and more modern combat aircraft - most likely, the choice will fall on the French Dassault Rafale.

Of course, all these improvements cost a lot of money. Based on this, Brazil is making its plans, laying the annual increase in the share of defense expenditures in the budget - from current 1,5 percent of GDP to 2,2 percent to 2030.

Russia is a slightly different case. In contrast to the economically developing South American state, Russia has already become accustomed to the role of a world power and expects such a characteristic. And if Brazil is engaged in military modernization, as it seeks recognition in the circles of the world elite, then Russia seeks only to maintain and improve its defenses, which once allowed it to stand on a par with the United States as one of the strongest military powers.

The collapse of the former Soviet empire gave Russia the opportunity to move to a market economy. But the collapse left unhealed wounds in Russia’s soul, which arose from the loss of the sense of prestige it possessed, being one of the two world superpowers. Russian leaders Vladimir Putin and Dmitry Medvedev sought to correct this, reiterating that the country maintains a presence throughout the entire post-Soviet space and using its energy resources to gain influence in remote regions.

In recent years, the Russian military aviation repeatedly penetrated the airspace of NATO member states during the exercises, but it was Moscow’s military invasion of Georgia in August 2008 that signaled that Russia would willingly use brute force to maintain its position in the post-Soviet neighboring countries.

Although in the course of this brief war, the Russian Goliath crushed Georgian David, there were also a lot of shortcomings of the Russian army related to training, equipment, reconnaissance, logistics and coordination of actions on the battlefield in real time.

In the end, it turned out that the way the Russian military showed themselves in Georgia prompted the Kremlin to take a decision in October 2008 on launching a comprehensive military reform designed for 12 years. The reform and modernization plan outlined by Defense Minister Anatoly Serdyukov is aimed at transforming the sluggish Russian army, based on the principle of mass mobilization, into a smaller army with higher combat readiness, better adapted to support the strategic goals of the Kremlin and capable of instantly responding to incidents along the whole country periphery.

As part of the new plan, special attention was paid to getting rid of obsolete military equipment remaining as a legacy of Soviet times and the acquisition of more modern military equipment. In all of this, one can clearly see the readiness of the Russian leadership to purchase foreign weapons and, in particular, the likelihood that the United States can become one of the suppliers. Moscow is already negotiating with France on the purchase of universal amphibious assault ships of the Mistral type and still hopes to conclude an 300 million agreement with Israel on launching a joint venture for the manufacture of unmanned aerial vehicles in Russia with Israel.

It is believed that only 10 percent of Russian military equipment meets modern standards. The new defense plan aims to remedy this situation and provides for an increase in the number of vehicles of the new generation to 30 percent by 2015 year, and to 70 percent by 2020 year. All this, along with the need to hire highly professional soldiers and officers for service in the new army, will cost a lot of money. From 2011 to 2020, the Kremlin plans to increase the budget by 46 percent - from 13 to 19 trillions of rubles (620 billion dollars).

Regardless of whether the attempts of the Russian government to transform the armed forces and reanimate the Russian defense industry, which once seethed with life, will succeed with the help of large investments, the adoption of foreign technologies and the creation of a Russian counterpart to the Advanced Defense Research Projects Agency), there can hardly be any doubts about the course and level of Moscow’s ambitions. This plan indicates that the Kremlin is not very interested in Russia giving up its position in the world and instead is thinking about continuing the struggle for influence in the conditions of the emerging multipolar world order.