How many tractors were used in the Reichskommissariat Ukraine? 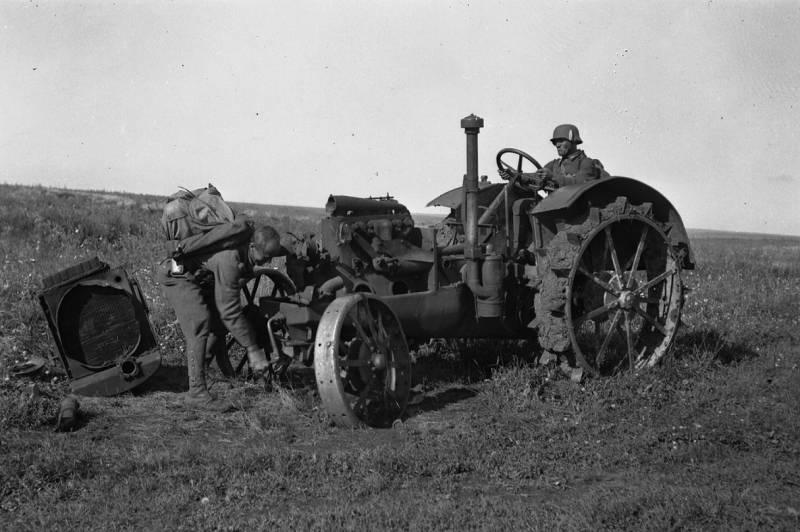 We will continue the study of occupational agriculture in the occupied territories of the USSR, which began in previous article... The Germans seized quite a lot of machine and tractor stations, in which there remained some tractor fleet suitable for work. They did not get the entire pre-war tractor fleet, since a significant part of the tractors was mobilized into the Red Army, used by the troops, evacuated, damaged and destroyed during the retreat. But still something remained.

Probably, the occupation administration of the Reichskommissariat Ukraine or the societies that managed large agricultural enterprises had statistics on the available tractor fleet, its use and the size of tractor plowing. However, the Germans were not kind enough to leave these documents to us as a keepsake, and most likely destroyed them during the retreat. Although in a heap of all kinds of documents, both captured in our archives and exported to Germany and settled in German archives, perhaps in some file, where researchers have not yet looked, such a certificate will be preserved. The archives are not looked at evenly, and historians have not looked into many cases for decades.

However, some traces still had to remain. Therefore, I carefully scan the documents in search of various references to certain regions of the occupied territories of the USSR. Any indication, any number, can provide valuable information. Documents generally contain much more information than one might think at first glance; the only question is how to extract it.

Not so long ago, in the case of the distribution of oil products from Romania, which is kept in the RGVA, I managed to find a couple of documents containing interesting figures that allow me to do a statistical trick and calculate how many Germans had tractors on the move in the Reichskommissariat Ukraine in 1943. 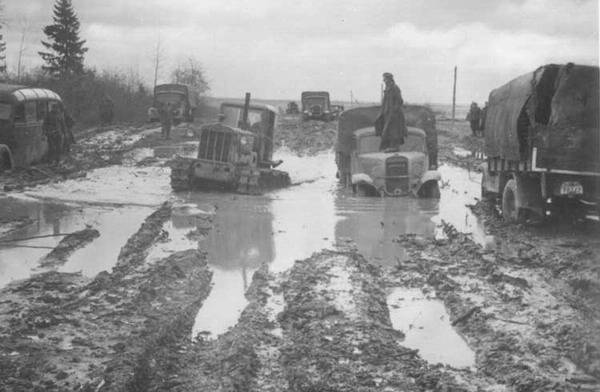 Why did the Wehrmacht need a captured Soviet tractor? Mainly for off-road fighting
Ukraine in this case is the territory of the Reichskommissariat Ukraine, since no other parts of the occupied territory of the USSR were officially called Ukraine. As far as one can assume, this fuel was intended for tractors used for agricultural work, which remained in the MTS and state farms. Of course, they could be used for different needs, for example, for road works, but it seems that the overwhelming majority of tractors provided by Romanian gas oil worked precisely at agricultural enterprises. Until a possible clarification, we will assume that all this tractor fuel was intended for agricultural tractors. Moreover, it is worth emphasizing that fuel was supplied for tractors that were available, therefore the amount of fuel also expresses the number of machines that needed it.

The tractors could be used for various jobs, in particular to pull trucks out of the mud. STZ 15/30 is dragging a German truck. On board the truck abbreviation: RVM - Reichsverkehrministerium, Reich Ministry of Transport
The researchers did not look into this case, and if they did, they probably would not attach importance to this figure. By itself, she says little. You need to know the context, the structure of mechanized agriculture in the 1930s, in order to understand whether it is a lot or a little, how many tractors can be provided with this amount of fuel and what work they can do.

We have a good reference book “Agriculture of the USSR. Yearbook 1935 ", which contains information on the number of tractors, their work and fuel consumption for 1934 for the regions of the Ukrainian SSR of interest to us: Kiev, Vinnitsa and Dnepropetrovsk, which basically made up the territory of the Reichskommissariat Ukraine. Of course, it would be better to take data that are closer to the war, for 1939 or 1940, since the tractor fleet changed in number, the characteristics of its work also changed. But such detailed data over the years I do not have at hand, and I now set myself another goal - to test the method of comparative calculations and obtain rough, approximate data. Moreover, tractors of the STZ-KhTZ 15/30 type even before the war constituted a considerable part of the tractor fleet in the MTS in Ukraine, as in 1934.

How many tractors did the Germans have?

We only have a small shard stories German occupation agriculture. One figure for July 1943. What can you get from it?

First, why ship tractor fuel in summer? The fact is that the cycle of field work included from spring to autumn: spring plowing, raising fallows, plowing for winter sowing and autumn plowing (plowing in the fall for spring plowing next year's sowing; increases the yield by 15-20%). The minimum required to get a harvest is: spring plowing, fallowing and plowing for winter crops. It’s just the latter that is carried out in the summer, from the end of July to the end of August, since the optimal time for sowing winter wheat in the forest-steppe and steppe Ukraine is from August 20 to September 5. Accordingly, in order to plow under winter grain, it is necessary to ship fuel in July, deliver it and distribute it to recipients.

Secondly, the reference book gives us the following information: how much winter grain was plowed in three regions of the Ukrainian SSR. In 1934 - a total of 1260 thousand hectares ("Agriculture of the USSR. Yearbook 1935". M., 1936, p. 690). Average fuel consumption for plowing is 25,3 kg per hectare. In total, 31 878 tons of fuel were required for plowing for winter crops. German consumption: 4 tons - 000% ​​of this comparison level. Accordingly, the Germans could plow 12,5 thousand hectares under winter grain with tractors.

Third, how many tractors do you need for this? The conventional 15-horsepower tractor produced about 360 hectares a year in terms of plowing ("Agriculture of the USSR ...", p. 696). At the same time, actual plowing in kind accounted for about 63% of the total volume of tractor work (from 58,6% in the Dnepropetrovsk region to 68,6% in the Vinnitsa region). In total, the average tractor plowed 226,8 hectares in kind. Normal performance of the tractor type STZ-KhTZ 15/30. 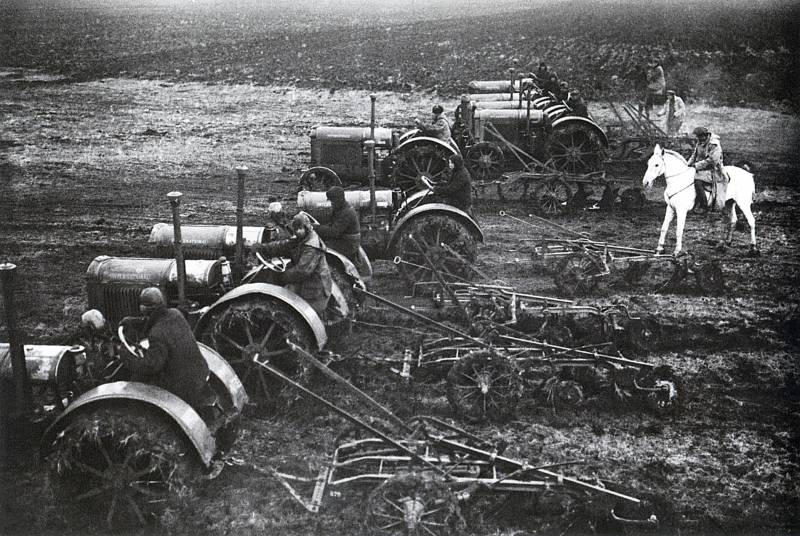 Before plowing. The foreman of the tractor drivers was entitled to a riding horse in the 1930s
Hence the conclusion: the Germans supplied fuel for the work of 2354 tractors for plowing for winter crops. Here we must make a special reservation that we are talking only and exclusively about the supply of gas oil from Romania, which we know. In addition, there could be supplies from other sources, for example, oil products from the fields in Drohobych or tractor fuel from Germany. However, there is reason to believe that fuel from Romania constituted the overwhelming part in the supply of tractors in the Reichskommissariat Ukraine.

In 1934, there were 15,5 thousand tractors in the three listed regions of the Ukrainian SSR. That is, when estimated by eye and adjusted for the growth of the tractor fleet in the pre-war years, the Germans had about 10% of their pre-war number on the move.

There were clearly more tractors that were serviceable and suitable for work. A letter from the Oil Administration of the Reichsministry of Economics dated July 5, 1943, with a request to increase the shipment of tractor fuel to Ukraine from 4 to 000 tons (RGVA, f. 7K, op. 000, d. 1458, l. 14) has survived. If this figure reflects the number of available serviceable and workable tractors, and also reflects the desire of the Reich Ministry of Economics to use them, then in this case there could be about 121 tractors at their disposal.

It follows that the Germans, at least in the territory of the Reichskommissariat Ukraine, could maintain mechanized agriculture at about 10% of the Soviet pre-war level in the same territory. This is not millions of tons of grain, and not so much, but also not so little. 157,5 thousand hectares of winter sowing alone on tractor plowing with normal agricultural technology and a yield of 8 centners per hectare is 126 thousand tons of grain. Winter and spring crops - about 250 thousand tons of grain per year, not counting any other work necessary in agriculture, such as threshing grain, which before the war was about half done by tractor threshers.

Unfortunately, the documents were preserved only for 1943, and only one month before the fuel supplies to Ukraine were indicated. However, 1943 is already a crisis year, a year of defeats and retreats, which could not but have an impact on the German occupation economy and on the distribution of Romanian oil products. On the one hand, the Germans were preparing winter crops, that is, they were going to harvest in 1944, which in reality did not happen. On the other hand, we are probably observing the tractor economy of the Reichskommissariat Ukraine in the stage of decline caused by the Soviet offensive, and it was supplied with less fuel than it needed. We need data for 1942 to get a more accurate and accurate picture of the use of the tractor fleet of MTS and state farms by the Germans.

Author:
Dmitry Verkhoturov
Articles from this series:
Harvests and procurement of bread in the occupied territories of the USSR

Ctrl Enter
Noticed oshЫbku Highlight text and press. Ctrl + Enter
We are
Harvests and procurement of bread in the occupied territories of the USSRChernobyl notebook. Part of 3
32 comments
Information
Dear reader, to leave comments on the publication, you must to register.