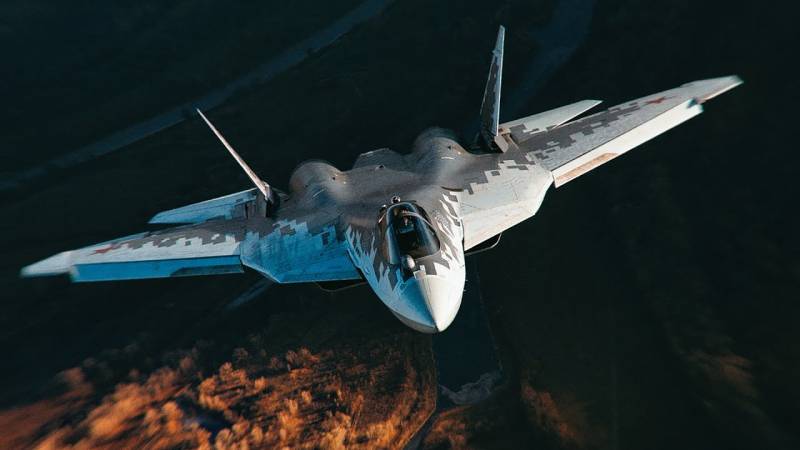 Joining the recent Exploration my colleague Kirill Ryabov and carefully analyzed the analytical material Russia's Su-57 Heavy Fighter Bomber: Is It Really a Fifth-Generation Aircraft? ("Russian heavy fighter-bomber Su-57: is it really a 5th generation aircraft?"), Prepared for the American RAND research center by so-called military experts Ryan Bauer and Peter Wilson, I have come to the final conclusion that a low level of professional competence is characteristic not only of ordinary journalists of numerous overseas military analytical publications, but also of well-known personalities in the American media space, whose analytical activities are the subject of increased interest as the headquarters of leading military-industrial corporations and non-profit research organizations at the Pentagon and research laboratories under the command of the US Air Force and Navy.


In particular, summing up my very superficial (without specifying indices and parameters of onboard complexes and sensors) comparative review of the element base of weapons control systems (SUV), airborne defense systems (BKO) and other architecture of avionics of the promising multifunctional Su-57 fighter, deeply improved the tactical fighter of the 4 ++ generation F-15CX / EX, as well as the 5th generation fighter F-35A, Bauer and Wilson made a number of technical mistakes that turned their analytical material into a completely biased opus, which in no way affects the level of prestige PJSC "Company" Sukhoi "in general, or on the competitiveness of" fifty-seventh "in particular.

So, as a key tactical and technical flaw, allegedly causing the scarcity of the "information field" of the Su-57 pilots and the inability of all-round monitoring of the aerospace for the sudden appearance of such threats as approaching missiles and air combat missiles with passive optical-electronic seeker ( operating in the IR / TV ranges and a photocontrast sighting channel), as well as the inability to covertly monitor the surface / ground sections of the theater of operations, Bauer and Wilson called the lack of a proper range of integrated optoelectronic systems for detecting attacking missiles that survey the airspace in the lateral and rear hemispheres , as well as a multispectral optical-location sighting complex of the lower hemisphere. Based on this statement, which is a gross technical error, the authors of the above opus underestimated the projected defensive and strike potential of the serial Su-57 to the level of the American modernized multipurpose tactical fighter F-15EX, the architecture of the optical-electronic means of which is many times more scarce than that of the 5- th generation of the "Lightning II" family (F-35A / B / C).

Obviously, Mr. Bauer and his colleague Peter Wilson had no idea that starting from the eighth flight prototype of the 2nd stage (T-50-9, w / n 509), all pre-production copies of the Su-57 are equipped with integrated multispectral optical-electronic complexes 101KS "Atoll", serially produced by the production association "Ural Optical and Mechanical Plant" named after E.S. Yalamov. Complexes of this type are represented by an aperture of an all-angle view distributed over the Su-57 airframe of 10 optoelectronic modules (sensors), distributed into 4 groups, each of which is assigned to a corresponding subsystem (optoelectronic reconnaissance / target designation, detection / suppression of attacking missiles or aerobatics at night in the terrain enveloping mode.

The 101KS-U attack missile detection subsystem has two twin KS-U / 02 (located in the lower generatrix of the nose of the fuselage and between the upper contours of the engine nacelles) and two monoblock KS-U / 01 (located in the side generators of the gargrotto, behind the cockpit) optical electronic modules with 6 identical lenses and high-resolution ultraviolet matrix photodetectors, providing all-aspect detection of heat-contrast objects at a considerable distance from the carrier. Based on the maximum structural similarity of the UV modules of the 101KS-U subsystem with the sensors of the attack missile detection station (SOAR) integrated into the avionics of an experimental prototype of the MiG-35 multifunctional fighter (w / n 154), one can come to the conclusion that the tactical and technical parameters of both subsystems are approximately equal.

In particular, the KS-U / 01/02 sensors operating in the ultraviolet range of sight are able to detect (by UV radiation from solid propellant rocket torches) and carry out a "tie-in" of medium / long-range anti-aircraft missiles, as well as air-to-air missiles on distance of 40-50 and 30-40 km, respectively. This bearing distance will be quite sufficient not only for the Su-57 pilot to carry out an anti-missile maneuver, but also for the 101KS-U subsystem to issue the azimuth and elevation coordinates of attacking missiles in advance, which can subsequently be transmitted to the fighter's weapons control system via the MIL- STD-1553B, and then loaded into inertial navigation units of RVV-SD / "Product 180" or RVV-MD (R-74) air combat missiles, adapted to intercept enemy anti-aircraft missiles and air combat missiles due to the presence of highly sensitive short-wave and medium-wave infrared and active radar seeker. As you can see, the 101KS-U subsystem has a full range of parameters for carrying out the carrier's defense against heat-contrast air attack means, in no way inferior to the American AN / AAQ-37 DAS attack missile detection stations with a distributed aperture installed on 5th generation F multipurpose fighters. -35A / B / C.

An equally important defensive subsystem of the 101KS Atoll complex is the subsystem for detecting and optoelectronic suppression of missiles and missiles with infrared seeker 101KS-O, represented by two turret optoelectronic modules, opto-transparent fairings of which are located on the lower generatrix of the fuselage nose (under the cockpit ) and on the upper generatrix of the gargrot (directly behind the cockpit canopy). Each optoelectronic module has an infrared direction finder with a matrix photodetector, as well as a laser unit paired with it to “blind” the photodetectors of the seeker heads of enemy attacking missiles. Neither the stealthy multirole fighters of the F-35A / B / C line, nor even the more advanced tactical fighters of the transitional generation F-15EX, have such an impressive range of onboard defense subsystems to this day.

The key component of the 101KS Atoll integrated multispectral optoelectronic complex in performing the tasks of covert detection of air targets and optoelectronic reconnaissance of enemy targets (without revealing its own location) is the 101KS-B subsystem, represented by a deeply improved turret 3-band quantum optical location station OLS-50M, installed in front of the cockpit canopy, as well as the 101KS-N suspended container optical-electronic sighting system. When operating in the long-wave infrared range, the OLS-50M module is capable of detecting infrared radiation from the jet jet of the TRDDF fighter of the Typhoon type at a distance of 50-60 km (at maximum mode in the forward hemisphere) and 80-100 km in the PPS and when the engines switch to afterburner operating mode; the detection range into the rear hemisphere (ZPS) in the afterburner mode can reach 130-170 km.

Suspended optoelectronic module 101KS-N, operating in television, low-level television and medium-, long-wave infrared ranges, is intended for detailed monitoring of the ground and surface sections of the theater of operations for the operation of armored vehicles, artillery, radio reconnaissance equipment, as well as surface boats and ships enemy (with different displacement) with the ability to identify them both in the daytime and at night. This module (as well as the electronic-optical complex EOTS of the F-35A fighter) fully complements the optical-electronic architecture of the Russian fifth generation Su-5 fighter, saturating the pilot's "information field" with comprehensive data on the tactical situation in the theater.

Ctrl Enter
Noticed oshЫbku Highlight text and press. Ctrl + Enter
We are
Situational analysis of the death of the MH17 flight (Malaysian Boeing 777), made on the basis of engineering analysis from 15.08.2014Strangulation: the context, conduct and consequences of the American naval blockade of China
136 comments
Information
Dear reader, to leave comments on the publication, you must to register.