Is there social justice in Russia? 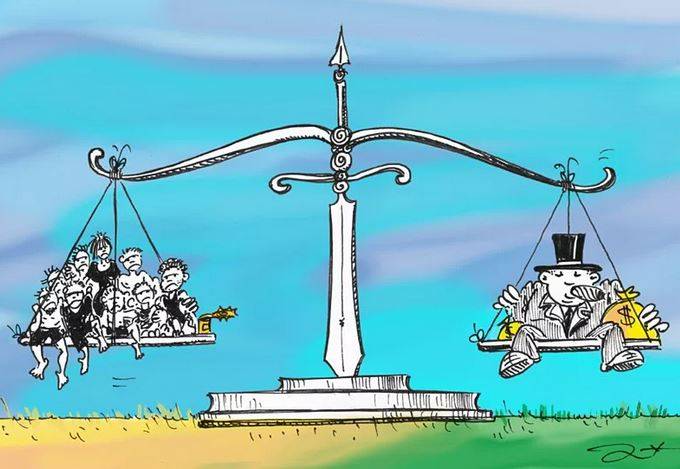 Social justice implies fair relations between citizens and society, the existence of equal opportunities for everyone and is measured by the criteria for the distribution of welfare, defined as the provision of citizens, a social group and an individual with material, financial, social and spiritual benefits.


The Russian person has a value base - justice, therefore, he is historically especially sensitive to issues of social injustice and does not accept inequality and private property, leading to inequality of people. In Russian self-awareness, wealth is a sin, capital destroys the soul, engenders injustice and humiliates another person. For him, social justice, equal rights for all and the need for a strong state that takes care of its citizens are important first of all.

Based on the traditional values ​​and mentality of the Russian people, its national idea is to build a society of social justice, a strong and economically prosperous state (civilization) that provides its citizens with a decent life and the realization of their civic interests.

First of all, property stratification leads to social injustice and social inequality, especially if it was achieved dishonestly and its legitimacy is not recognized by the majority of the population. Let's see what social foundations of society are being implemented in today's Russian state.

The level of well-being of the population is determined by the ability of the state's economy to provide it. In terms of gross domestic product, Russia is the sixth economy in the world, and the welfare of society should have been at a fairly high level. But GDP characterizes only the volume of the national product produced and does not reveal how effectively it is used in the interests of the whole society and every citizen.

With the existing capitalist mode of production in Russia and the presence of private ownership of the means of production, prerequisites are created for the redistribution of part of the income from the produced product in the interests of these owners through the receipt of profit (dividends) from property ownership, which, naturally, provokes property stratification and social inequality in society.

As a result of the collapse of the Soviet system, social inequality in the country has sharply increased, today the population of Russia is divided into three unequal groups: rich owners and officials, a narrow stratum of the middle class and the vast majority of the population, living mainly on a fairly modest salary.

Property stratification leading to social inequality is mainly due to society's non-recognition of the legitimacy of the predatory privatization of the 90s, which formed a class of large owners, unreasonably high incomes of top and middle-level officials and heads of state corporations, as well as servants serving them, and ubiquitous corruption with kickbacks for bureaucratic services ...

All this leads to the fact that the fairly high national income of the state obtained by the labor of the whole society is redistributed and partially appropriated by a handful of the ruling class and the bureaucracy serving them. Moreover, they and their families defiantly flaunt this and show their superiority over the rest of the population. Such unjust social inequality is still causing deep discontent in society, and at the slightest upheaval it can provoke a social explosion.

For the stability of the state and society, it is generally accepted that the incomes of the richest 10% of the population in the country should not exceed the incomes of the poorest 10% by more than 10 times. According to the UN, this coefficient in Russia is 11,0, Italy is 11,6, the United States is 15,9 and the United Kingdom is 13,8, that is, in terms of property stratification, Russia is at the level of the richest countries in the world.

Even more telling is the World Inequality Report, which says that 45,5% of Russia's national income belongs to the richest 10% of the population. This is confirmed by Rosstat, according to its information, the situation is somewhat different, but also impressive: 20% of the richest own 47% of the national income. And such an expert on the fortunes of the richest people in the world, like Forbes magazine, cites information that there are 77 billionaires in Russia with a combined fortune of $ 283 billion. What kind of social justice can we talk about with such an impact on the economy of private capital?

Today, the most informative indicator of social inequality is the Gini index. It most accurately shows how evenly income is distributed among the citizens of the country.

Even more egregious is the situation with the income of the heads of state corporations, including such well-known ones as Rosneft and Gazprom, which do not restrain themselves in their income at all. For example, the monthly income of the head of Rosneft Sechin is up to 20 million rubles, or 240 million rubles a year, the income of the head of Gazprom Miller is of the same order. And this is with an average salary in the country of 48,3 thousand rubles, and for a significant part of the population it is even more modest and may be less than 20 thousand rubles.

In accordance with the legislation, the board of directors, which includes representatives of the owners, is in charge of the income of state corporations and the remuneration of their top managers. It should be noted that the Russian state owns only 50% of the share capital of Rosneft and Gazprom, the rest of the shares have long been sold into private ownership, and the state cannot always influence decisions. In this regard, part of the profits of corporations often goes to the payment of multi-million dollar bonuses to management and government officials who are part of their management structures; moreover, government representatives often defend not the government, but the corporate interests of companies. The management system, built back in the 90s, allows the use of state property as a tool for the legal redistribution of national income in favor of those in power.

How social inequality is justified

The justifications of the apologists of such a social hierarchy are interesting, for example, political analyst Alexander Zapolskikh, provesthat due to the quality leadership of the heads of state corporations, they mainly fill the budget and bring trillions of rubles to the state, that Sechin manages a team of 249 thousand people, and that Rosneft pays more than 4 trillion in taxes to the budget in just one year. rubles. Indeed, this is so, state corporations are the main taxpayers, but how much their heads influence this is a big question.

Zapolskikh emphasizes that the net profit, for example, of Rosneft, is 649 billion rubles, of which 270 billion is spent on dividends. Further it is concluded that “the above 270 billion of dividends from the annual profit will also go to the budget by 99%,” which is not true, since the state's share in the share capital of Rosneft is 50% and the state will receive only half of the dividends to the budget - 135 billion rubles, and the other half will go into private hands.

He also proves that the heads of state corporations personally pay high taxes to the budget, which is also not true. First, they do not pay taxes on dividends, since the current laws exempt them from such an obligation, allowing them to take dividends offshore and evade taxation. This year alone, the law on the payment of 15% of taxes on dividends was finally adopted, but it comes into force on January 1, 2021. Second, corporate taxes are mainly rents on minerals and income from the labor of hundreds of thousands of people who produce gas and oil, and not so much the personal contribution of their leaders. So the justifications of the apologists of the current system of social hierarchy raise great doubts about their objectivity.

In this regard, it is worth comparing the socio-economic policy pursued in the former republics of the Soviet Union - Russia and Belarus. The Belarusian leadership is pursuing a policy aimed at limiting the capital of private individuals and a relatively even distribution of state revenues among its citizens. Such actions lead to a lower stratification of society than in Russia. There are no billionaires in Belarus and only 1,4% of the population owns assets over 100 thousand dollars. There are millionaires, but there are only 0,1% of the total population. Therefore, Belarus belongs to the countries with the lowest property stratification, where the principles of social justice are generally observed. For all the political and economic problems of Belarus, Russia has a lot to learn from it.

Ctrl Enter
Noticed oshЫbku Highlight text and press. Ctrl + Enter
We are
The price of justiceThe world we leave, the world we enter, and the world between them
170 comments
Information
Dear reader, to leave comments on the publication, you must to register.