Czech press explained why Poles do not like Marshal Rokossovsky 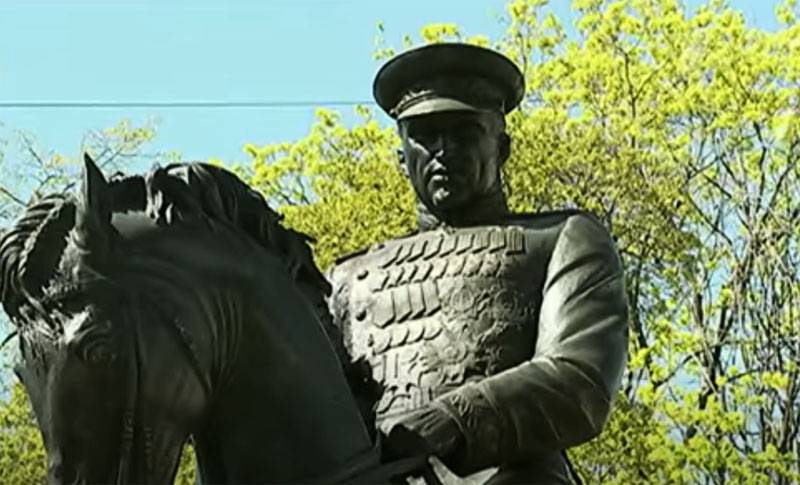 Konstantin Rokossovsky is one of the most prominent Soviet marshals, heroes of the Great Patriotic War. But in Poland his memory is not honored, although Konstantin Konstantinovich is an ethnic Pole. Czech journalists from Forum 24 are also trying to figure out the situation and explain the "dislike" of modern Poles for Rokossovsky.

Konstantin Rokossovsky was born in Warsaw in 1894. By the way, his father's name was Xavier, and the future marshal took the patronymic "Konstantinovich" in the Russian manner only later. On August 2, 1914, young Konstantin Rokossovsky volunteered for the 5th Dragoon Kargopol Regiment of the 5th Cavalry Division of the 12th Army. This is how the military career of the future famous commander began, stretching for more than half a century.

By 1917, Rokossovsky was awarded the rank of junior non-commissioned officer, and after the October Revolution he entered the service in the Red Guard. Participation in the Civil War as part of the Red Army allowed young Rokossovsky to reveal his military talents. In three years he went from a Red Army soldier to the commander of a separate cavalry regiment. In 1930, he already commanded the 7th Samara Cavalry Division, and in 1936 he became the commander of the 5th Cavalry Corps.

Then there was a period of disgrace and repression: the corps commander was slandered, and he was arrested. From August 17, 1937 to March 22, 1940, Rokossovsky was held in the Internal Prison of the NKVD in Leningrad, and then suddenly he was suddenly reinstated in rank and sent on a long vacation in Sochi, after which he took command of the corps. The fate was favorable to Rokossovsky: most of the repressed Soviet military leaders of the late 1930s were shot or disappeared in the camps.

Having freed Rokossovsky, Stalin made the right decision: during the Great Patriotic War, the commander showed himself from the best side. His name, along with the name of another "Marshal of Victory" Georgy Konstantinovich Zhukov, is inscribed in gold letters in history Great Patriotic War. Moreover, to be honest, at the front Rokossovsky was respected even more than Zhukov: he tried to protect people, was distinguished by greater intelligence in dealing with officers than Georgy Konstantinovich, who was rude and harsh.

But why is Rokossovsky not favored by his fellow tribesmen, who are so fond of listing outstanding Poles? First, it is the Warsaw Uprising. It was from this moment that the history of Poles' claims to their legendary compatriot began. At that time, Rokossovsky was in command of the 1st Belorussian Front and, according to the Polish media, did not come to the aid of the rebels.

Naturally, the real perpetrators of the tragedy in Warsaw are not remembered today, and this is the very Polish "government in exile" that sought to raise an uprising in the capital specifically to free Poland from the Nazis before the Red Army did. It didn't work out, but for some reason, the Soviet commander was to blame.

Secondly, after the war, in July 1945, Konstantin Rokossovsky was appointed commander-in-chief of the Northern Group of Forces, stationed in Poland. This is the next reason for complaints. From the point of view of the Polish officialdom, Rokossovsky played a crucial role in the post-war "Soviet occupation" of Poland.

In 1949, at the request of Polish President Boleslav Bierut, Stalin dismissed Rokossovsky "to serve Poland": the marshal was appointed to the post of Minister of National Defense of Poland and was closely engaged in organizing the Polish Army. Rokossovsky held this post for seven years, until 1956. It would seem that we should thank the Soviet Marshal for creating one of the most efficient armies in Eastern Europe, modernizing it and, at the same time, managing to preserve Polish military traditions.

But Rokossovsky is charged with organizing the suppression of the Polish national movement. In 1956, Rokossovsky led the suppression of strikes by Polish workers. More than 70 people died as a result of the suppression operation. Today this circumstance gives the Polish press a reason to accuse Rokossovsky of direct participation in the "occupation", and the front-line merits of the great marshal for Warsaw are more like a thorn in the eye: it is not customary to respect Soviet commanders in modern Poland.

Ctrl Enter
Noticed oshЫbku Highlight text and press. Ctrl + Enter
We are
115 performed since the birth of Marshal of the Soviet Union Konstantin Konstantinovich RokossovskyDecember 2010 years. Russian March. Senseless and merciless? Notes not a Russian person
63 comments
Information
Dear reader, to leave comments on the publication, you must to register.