Warriors from the column of Marcus Aurelius 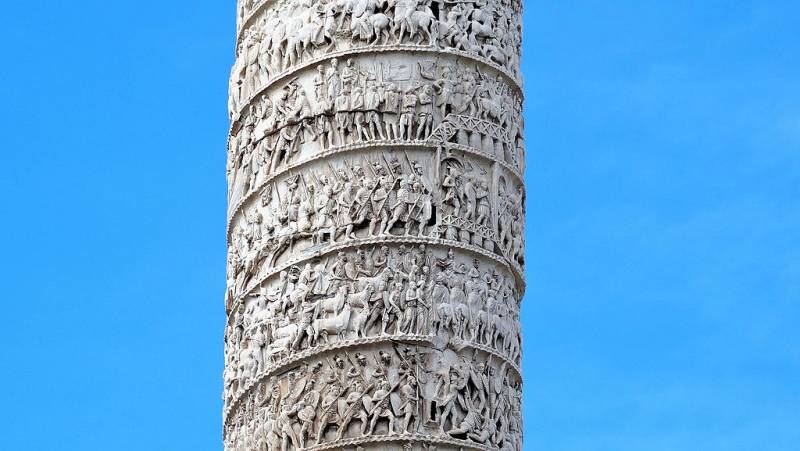 Typical depictions of scenes of the war between Rome and the Germans: Roman legionnaires in the same type of weapons on a campaign; prisoners were captured, cattle were captured, bridges with strong railings were built across the rivers, the horsemen of the Roman cavalry sit on blankets hanging very low, but they do not have stirrups ...

Let your deeds be as you would like to remember them at the end of life.
Marcus Aurelius, Roman emperor

Ancient civilization. Interest in ancient civilization has always been very high. The achievements of civilizations that existed before it, that is, the Bronze Age, may even be comparable with it, but they did not leave written monuments for us. Her creations do not speak to them, “all the evidence”, as modern investigators would say, is exclusively circumstantial. Not so with antique history... Her monuments in stone, ceramics and metal, in gold and silver, of lead and copper, and even fragile glass have come down to us; we also have written texts. Made on stones and clay, papyrus and parchment. They all talk about different things, and there are many of them. For example, the diaries of the Roman emperor Marcus Aurelius have come down to us. And their value is so great that it was said: "If they were the handbook of every official and every ruler, the world would be different!" In addition, the written sources of this time supplement the found and preserved artifacts, and they begin to talk to us, that is, their evidence is much more significant than the silent megaliths of previous eras. However, in addition to many texts, statues and bas-reliefs have survived to our time, looking at which we can personally imagine, let's say, the appearance of the same Roman soldiers during the war of Rome with the tribes of barbaric Marcomanians. The monument in question is called the column of Marcus Aurelius. And that's just about her today and we will tell you. 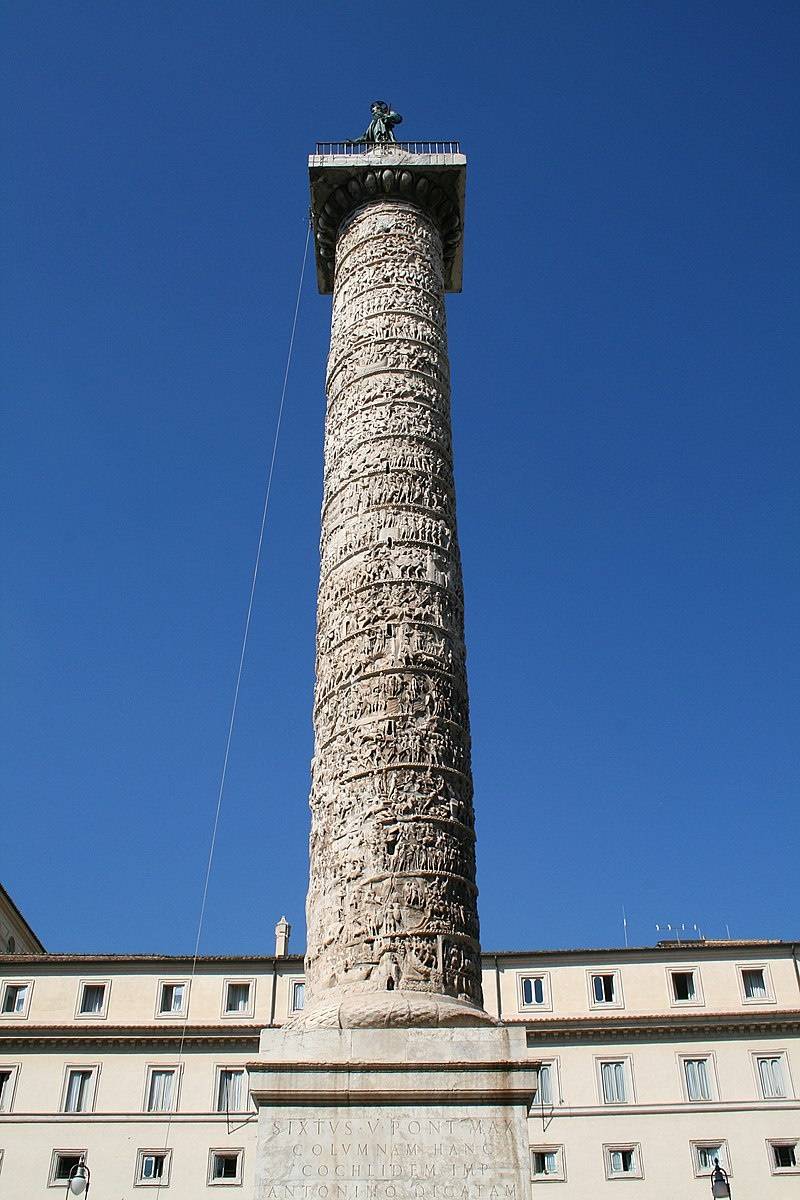 Column in the Square of the Columns
Let's start with what kind of monument it is. where is it, what it is. So, the Column of Marcus Aurelius is a monumental column of the Doric type that stands in Rome on the Piazza Colonna, and this square is named after her. It was built between 176 and 192 years as a monument to the events of the Markoman war. Its prototype was the famous column of the Emperor Trajan. It is known that Marcus Aurelius lived in 121-180 AD, and ruled from 161 to 180 AD. That is, they began to build it during the life of the emperor and, of course, with his approval, but finished already 12 years after his death. And this is not surprising, since the work on this monument required a lot of effort, time and expense. The fact is that the entire surface of the column, as in the case of Trajan's column, is covered with spiraling bas-reliefs telling about the events of the Marcomanian war. And making them all was undoubtedly a rather difficult and lengthy affair. 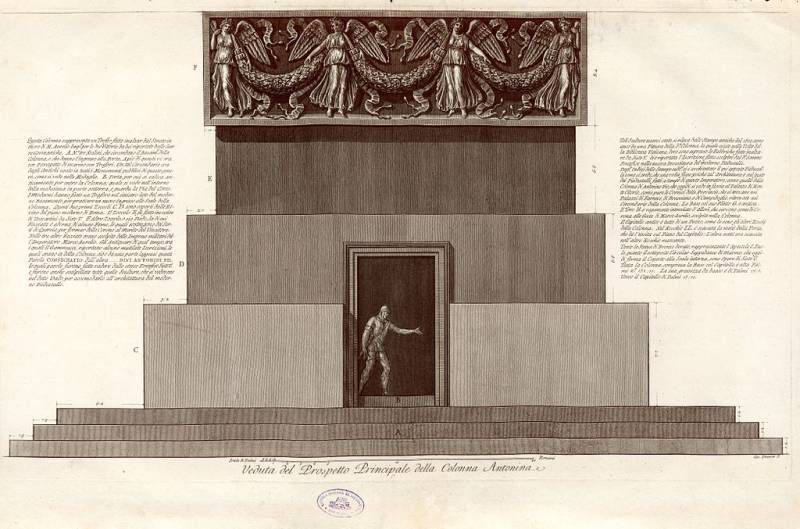 Column base. Giovanni Battista (or Giambattista) Piranesi (1720-1778), Italian painter who painted bas-reliefs of a column
The height of the column is 29,6 m, the height of the pedestal is 10 m. The total height of this monument was 41,95 m, but over time 3 meters from its base after the restoration carried out in 1589 turned out to be below the surface of the earth. The column's shaft is made of blocks of Carrara marble (28 blocks) with a diameter of 3,7 meters. Just like Trajan's Column, Marcus Aurelius's Column is hollow inside and there is a spiral staircase with about 190-200 steps leading to its top. On a square platform there once stood a sculpture of Marcus Aurelius himself. Staircase lighting is provided through small vertical windows. 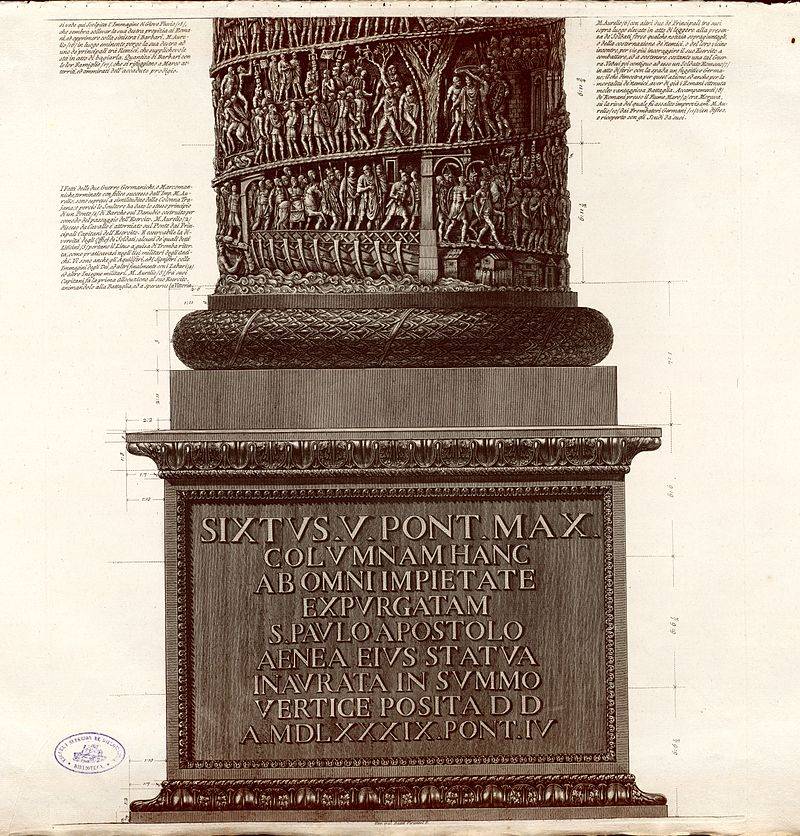 The lower part of the column. Giovanni Piranesi 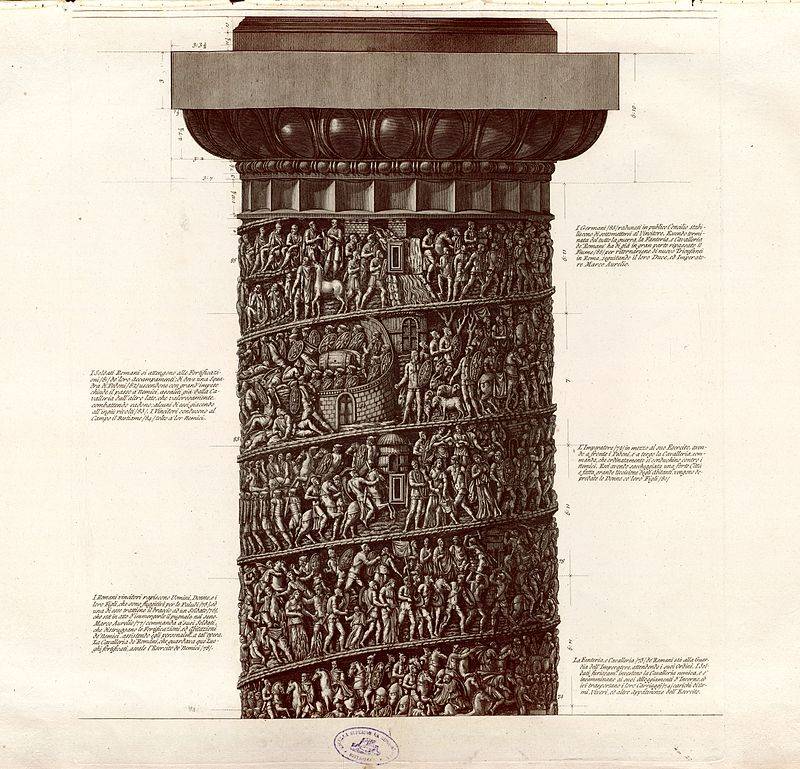 The very top of the column. Giovanni Piranesi
But the most important thing, of course, is its bas-reliefs. Moreover, everything that is depicted on them is very noticeably different from the reliefs on Trajan's column. Differs primarily in much greater expressiveness. The play of light and shadow on the surface of the column of Marcus Aurelius is much more noticeable, since the stone carving here is made deeper than on Trajan's column, where the figures are flatter. In addition, here the heads of the figures are slightly enlarged, which, apparently, was originally conceived for greater accuracy in conveying facial expressions. But at the same time, we see at the same time a decrease in the quality level of elaboration of clothing details, and weapon characters. True, the sculptors can be understood, because there are literally thousands of figures depicted on the column! 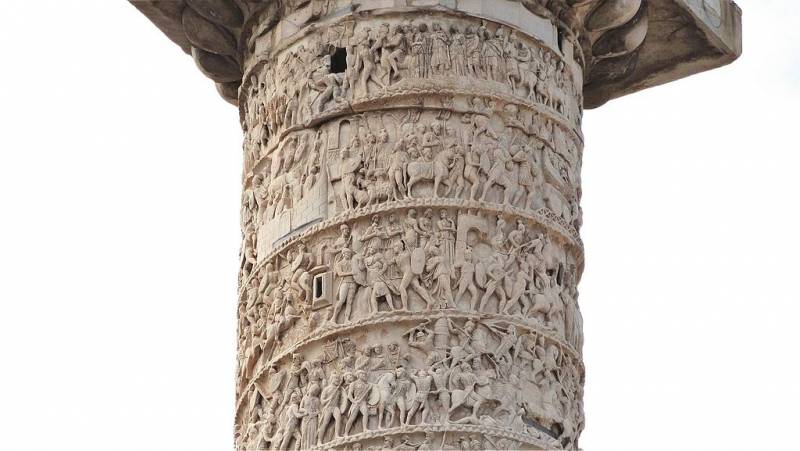 And this is how its upper part looks in the photo ...
The preservation of the figures on this column is somewhat worse than on Trajan's column, but since the carving here is deeper, that is, it is essentially a high relief, they make a much stronger impression. That is, Trajan's Column seems smoother, and Aurelius's Column - more embossed, and so it is in reality. 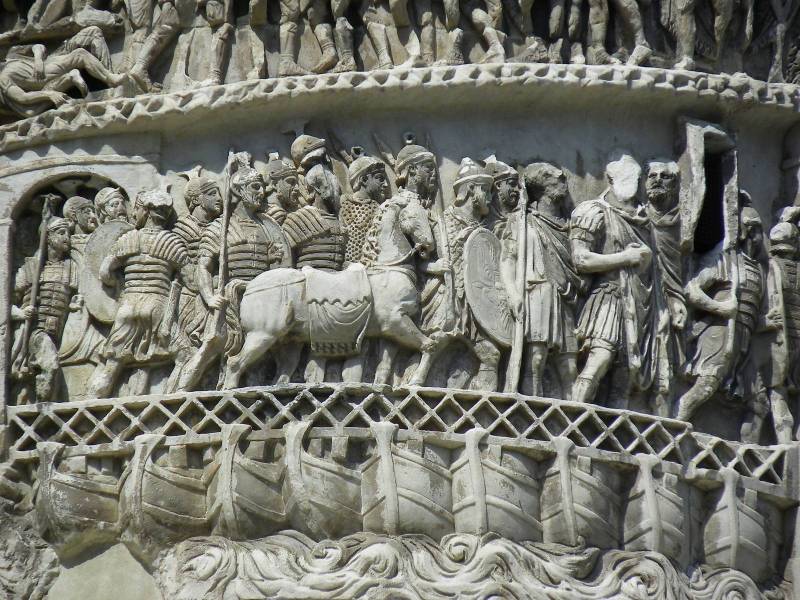 Legionnaires cross the Danube on a floating bridge. The horse's equipment is very clearly visible in the foreground. Legionnaires are represented in three types of armor: lamellar loricas, chain mail (shown in the bas-relief as simply "holes") and scaly shells. Helmets - some with a ring on the crown, others with a small sultan. Oval shields
Interestingly, in the Middle Ages, climbing the stairs to the top of the column was such a popular pastime that the right to receive an entrance fee for it was put up for auction every year in Rome. Over time, namely by the 1589th century, the statue of Marcus Aurelius was already lost, and in XNUMX Pope Sixtus V decided to restore the column. This was entrusted to the architect Domenico Fontana, who decided to erect a sculpture of the Apostle Paul on it, smeared over the destroyed reliefs (about which the corresponding inscription was made on the pedestal), but in it he made a mistake and called the monument "Antoninus Pius's Column".

The hike continues. We see the standard-bearers in scaly shells, but not in helmets, but with hoods on their heads, and the rider - in a very short chain mail with scalloped hem, similar to very short chain mail from Trajan's column. That is, this type of armor has not undergone absolutely any changes over the past 80 years! Ankle swords hang on the left, no one has pugio daggers, and no soldier's belts (kingulum). Now these types of equipment are in the past!
By the way, the difference between these two columns, Trajan and Aurelius, is only eighty years, but not only the change of relief to high relief is striking, but also the general artistic manner. If you look closely, you can see that the scenes of war on the column of Marcus Aurelius are shown less pretentiously than on the column of Trajan. Experts believe that the style of the column of Marcus Aurelius is closer to the famous Arch of Constantine the Great than, again, to the column of Trajan. Amusing can be considered the fact that heroizing the Roman legions, now consisting of mercenaries, and not only the indigenous inhabitants of Rome, at the time of Marcus Aurelius ceased, which was reflected in their image on the column. That is, it is believed that both the Arch of Constantine and the column of Marcus Aurelius show us the transition from ancient art, heroizing its characters, to art that is more simple, realistic, Christian. And this was, of course, still a beginning, which later received its full development.

The Romans set fire to the houses of the Germans, and those with crooked knives and shields in their hands are trying to defend themselves. Graphic images of bas-reliefs from the book "Column of Marcus Aurelius, Emperor of Rome" published in 1704. Giovanni Pietro (1613-1696) and Bartoli, Pietro Santi (1635-1700)
Well, as for the battle scenes, we can say the following about them: in the lower part of the column we see the battles of the Romans with the Germanic tribes, and on the upper ones they are already fighting against the Sarmatians. Again, it is obvious that in the image of the soldiers of the Roman legions, which already consisted mainly of mercenaries, their heroization began to be absent during the time of Marcus Aurelius. Moreover, the sculptors seem to sympathize even more with the beaten Germans: those with the most primitive weapons in their hands resist the legionnaires, chained in plate armor and chain mail, and they burn their houses and fields and take women into slavery. In general, we do not see robbers in the Germans and Sarmatians, but the Romans appear as such on this column.

Roman cavalry attacking the Germans. Please note that the Romans wear tight trousers like breeches that go over the knee. The sculptors portrayed the Germans as tall and beautiful people! Their pants are wider and reach the ankles. It's funny, although understandable, that the chain mail of the Roman horsemen does not even cover the buttocks. And you go to the train sitting on metal rings!

Horse fight
Separate images from the column were repeatedly used as illustrations for books on the history of Ancient Rome. But here you should keep in mind the time of creation of this monument: the end of the II century AD, and, accordingly, only about the warriors of this time, he can tell us!

The Romans built a "turtle" and under its cover they lay siege to the fortifications of the Germans. Those throw at them whatever comes to hand: cart wheels, burning torches, stones, swords and even vessels with water, apparently hot. But they cannot do any harm to the Romans!

Horse Germans flee from the battlefield and die on the ground. Roman horsemen chase them, steal cattle and with pickaxes destroy German dwellings and some kind of stone walls. Such picks were found by archaeologists ...

A very naturalistic image above left: a Roman soldier thrusting his sword into the eye of a German. "Woe to the vanquished!" - one word!
Already in the 1613th century, exceptionally accurate sketches were made from the bas-reliefs of the column, the authors of which were the famous painter and antiquarian Bellori, Giovanni Pietro (1696-1635) and Bartoli, Pietro Santi (1700-1704). There is a well-known book "Column of Marcus Aurelius, Emperor of Rome" published by these authors in XNUMX, images from which have now been digitized by Emory University and the Robert W. Woodruff Library, thanks to which they can now be used without actually referring to this old edition. 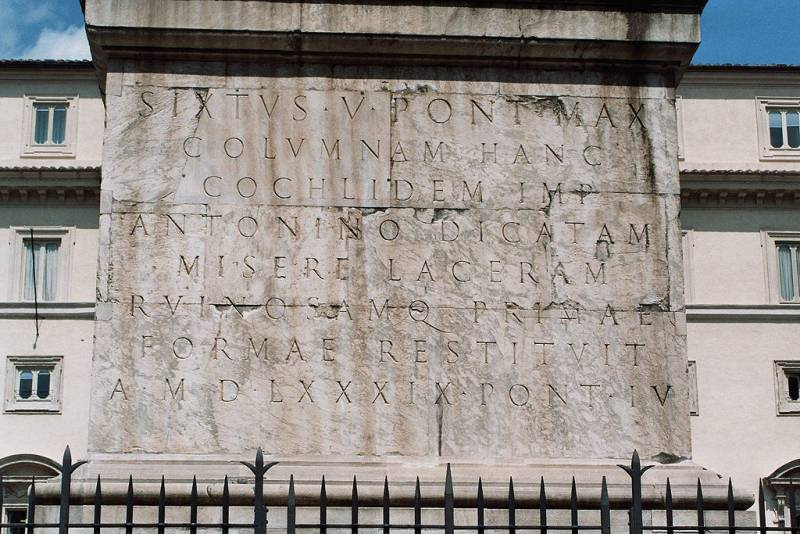 Author:
Vyacheslav Shpakovsky
Articles from this series:
Prehistoric Argonauts
Riddle: riders on the bas-reliefs with clubs in their hands
Minoan Pompeii: a mysterious city on a mysterious island
Antique ceramics and weapons
Gold for war, the fourth wonder of the world and Ephesus marble
Homer's poems as a historical source. Antique civilization. H. 1
Croatian apoxiomen from the water. Ancient civilization. H. 2

Ctrl Enter
Noticed oshЫbku Highlight text and press. Ctrl + Enter
We are
The Last of the PtolemiesAnother column. Another source
132 comments
Information
Dear reader, to leave comments on the publication, you must to register.