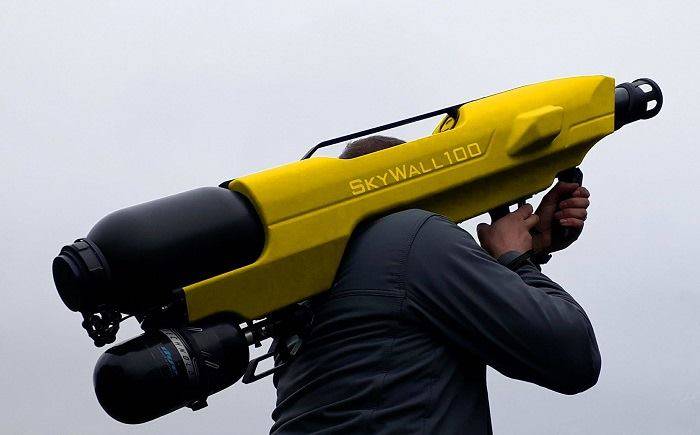 With the development and spread of unmanned aerial vehicles, incl. light multicopters for civil use, the issue of protection from such equipment is becoming more and more urgent. Various methods of counteraction and interception are proposed, based on different principles. The original product is offered by the British company OpenWorks Engineering - the SkyWall 100 grenade launcher and a family of products based on it.

The SkyWall 100 product was first shown in 2016. The development company demonstrated the appearance of the complex and its components, published basic information, and also showed how all these products work. The grenade launcher attracted the attention of specialists and the public, and later went into series and went to the first customers.

The development company mentioned that modern anti-UAV weapons have significant drawbacks. Specialized electronic warfare systems interfere with the operation of the surrounding electronics, which makes it difficult or excludes their use in a number of situations. Shooting weapon or other kinetic systems could cause serious collateral damage. In doing so, they destroy the UAV, which seriously complicates the search for its attacker operator. 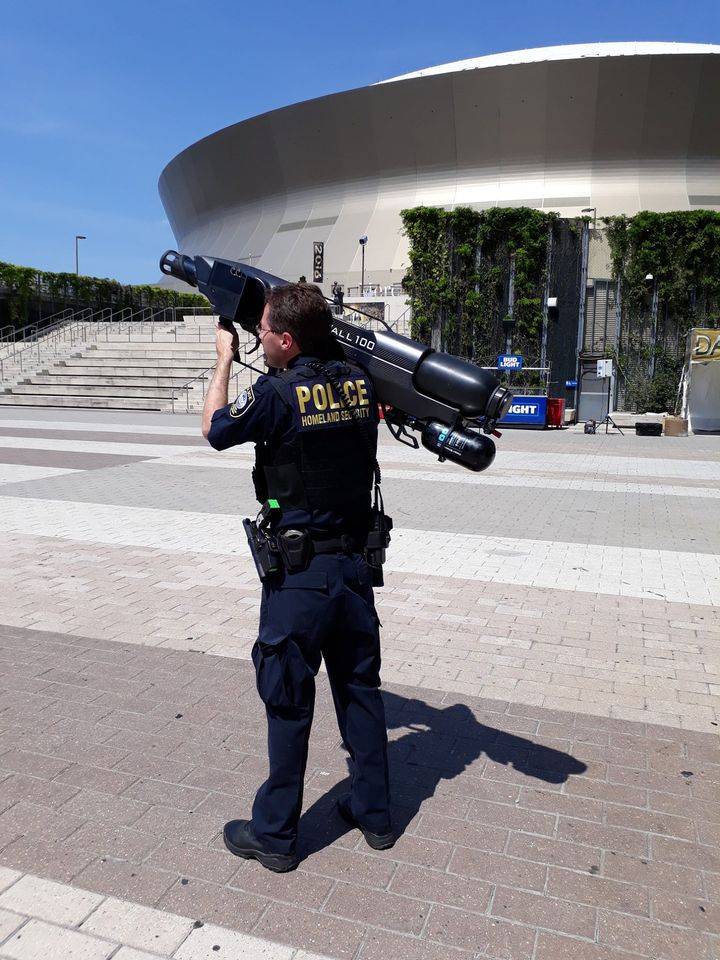 When developing SkyWall 100, these problems were taken into account, as a result of which it is based on the well-known idea of ​​catching a drone with a net. Due to the use of special ammunition and a special fire control system, only the UAV target is captured without damage to surrounding objects. In this case, the target returns to the ground without significant damage.

The SkyWall 100 grenade launcher is proposed for use at various facilities and territories where UAV flights are prohibited. These can be military bases, civilian airfields, airspace over mass events, etc. The technical and operational features of the complex were supposed to simplify such its use with sufficient safety for others.

From a grenade launcher to a UAV

The SkyWall 100 complex and some variants of its development include several basic products for different purposes. The basis of the complex is a starting device with an optical-electronic sighting unit. The launcher is made in the form factor of a grenade launcher for shooting from the shoulder. The total length of the product is 1,3 m with a height and width (excluding the scope) approx. 300 mm. Weight - 12 kg. The complex is transported partially disassembled in a hard case. 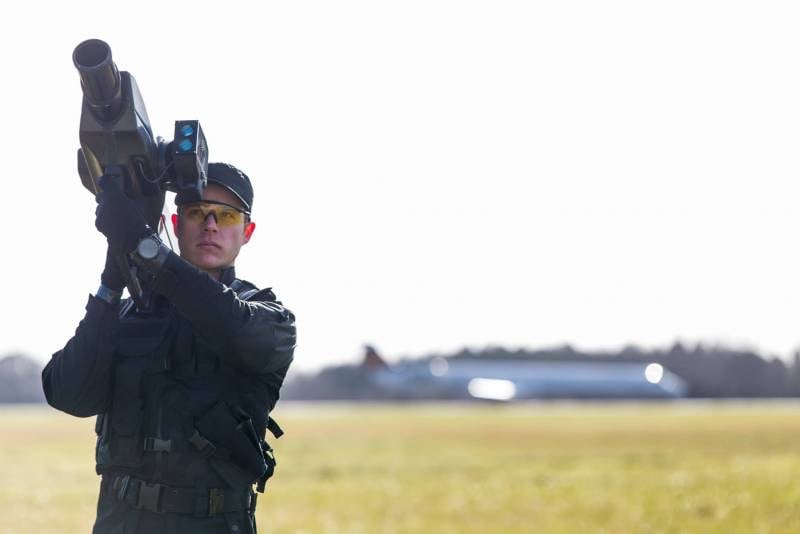 The SkyWall 100 grenade launcher is made in a plastic case, which gives it a futuristic appearance. A light barrel runs along the hull. The breech is designed in the form of an extended chamber with a rear shutter cover for loading grenades. In front, under the barrel, there are firing controls, under the breech there is a replaceable compressed air cylinder.

The ammunition is launched pneumatically by opening the valve and supplying gas from the cylinder. The pressure in the cylinder reaches 4500 psi (306 atm), which makes it possible to throw grenades at a range of 120-200 m and a height of up to 90-100 m. One cylinder ensures the production of several shots, after which it is replaced.

The sighting system of the complex has optoelectronic and laser rangefinder channels. It is capable of automatically tracking a specified air target, measuring the range to it and generating corrections for firing. In addition, the sight transmits data to the grenade electronics through a separate programmer on the barrel. 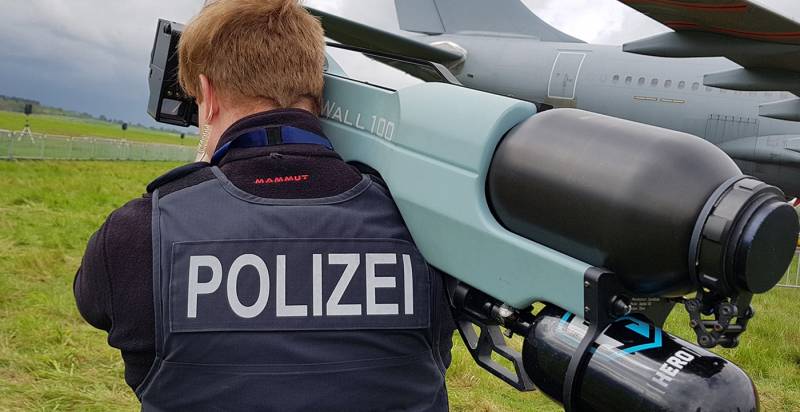 Shooter with a grenade launcher at the Berlin Air Show, 2018
The sight and grenade launcher provide firing at small-sized UAVs moving at a speed of no more than 15 m / s in the direction of the shooter or at 12,5 m / s along the front. The minimum firing range, due to the principle of the grenade, is 10 m. The maximum one depends on the type of ammunition. It takes no more than 8-10 seconds to reload after a shot (without replacing the cylinder).

For use with the grenade launcher, five types of ammunition are offered with different characteristics and capabilities. Customers are offered three types of "combat" grenades and two practical. This allows you to choose the grenade that best suits the current task, as well as train shooters. 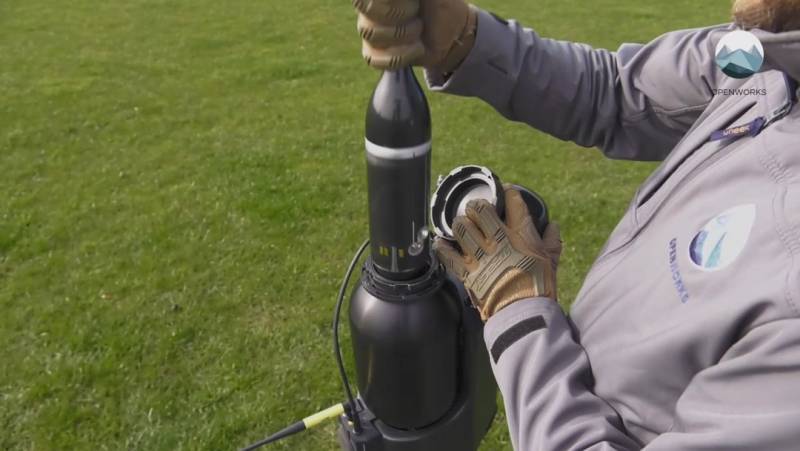 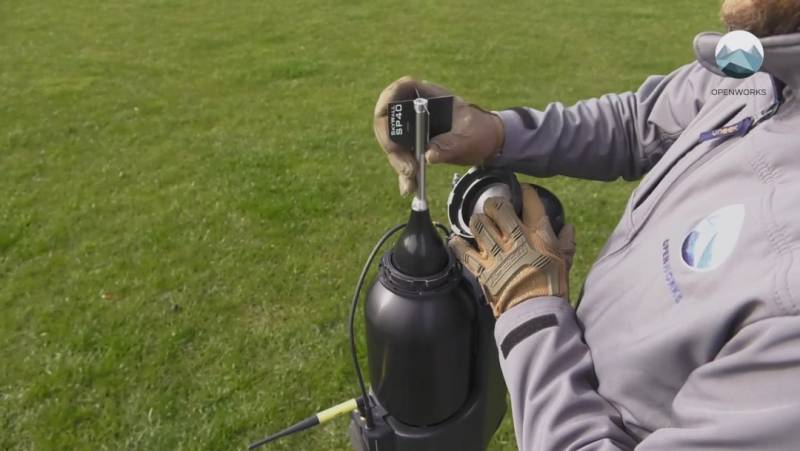 Loading process, the design of the ammunition is visible
The "combat" grenade for SkyWall 100 has a streamlined body that contains a net with angular weights and simple electronics. A thin tubular tail with a tail is installed on the body. Practical ammunition has the same design, but differs in a one-piece body and no mesh.

Immediately before firing, the grenade receives data on the range to the target, after which it is sent flying along the calculated trajectory. At a given point of flight, the automation opens the body and fires off a strong net with an area of ​​8 square meters, which literally entangles the UAV and blocks its propellers. The net can be equipped with a parachute for the safe descent of the captured drone. 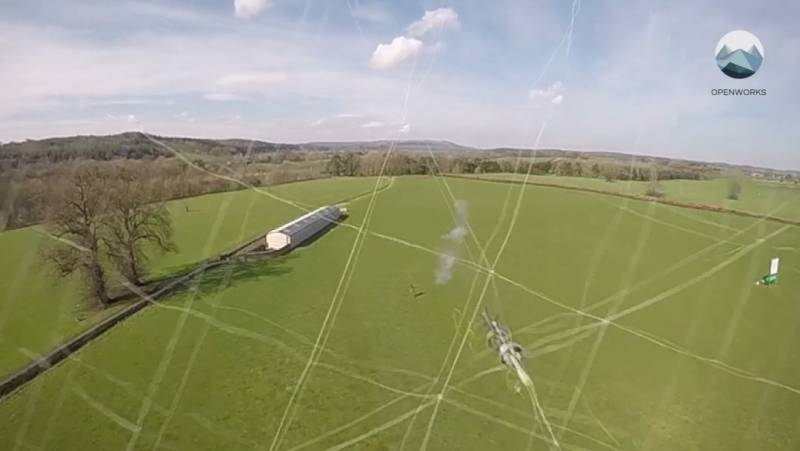 Grenade threw the net - drone camera shooting
Grenades differ in their characteristics and functions. Thus, the SP10 product is capable of catching UAVs at ranges of up to 150 m, but its net does not have a parachute and does not provide a soft landing. The SP40 allows you to capture and land the drone by parachute, but its maximum range is lower - 120 m. On the basis of these ammunition, practical TR10 and TR40 have been created. A grenade with an SP40-ER or SP90 reticle increases the range of the complex to 200 m and provides target rescue.

The product quickly attracted the interest of potential customers. Thus, in 2018 it was reported that SkyWall 100 systems would be used to ensure the safety of the Berlin Air Show. They were included in a large multicomponent air defense system, capable of intercepting targets of all major classes, from light UAVs.

This year, a modification of the SkyWall Patrol system entered testing in the US Army. The Pentagon is showing great interest in the means of protection against UAVs, incl. not posing a threat to surrounding objects. After passing all the necessary tests, the new version of the SkyWall can enter service and supplement other light air defense systems. 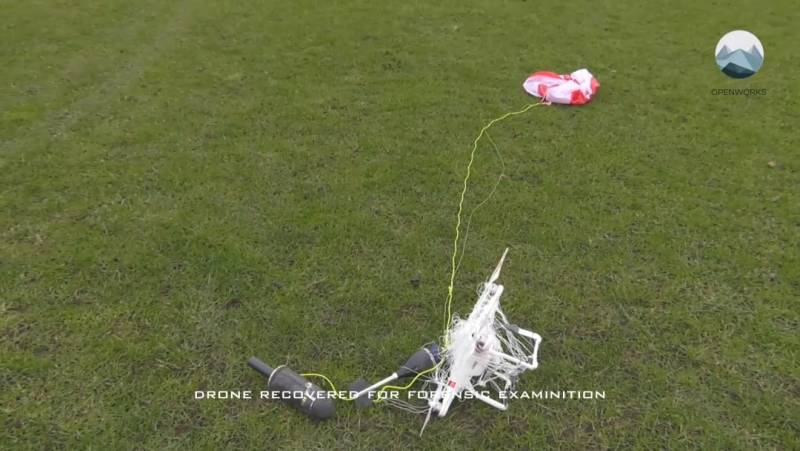 UAV grid on the ground
Entering the United States could have the most serious consequences. First of all, this will lead to the receipt of orders that are record large for the developer company. In addition, other foreign countries may be interested in the system, which will result in new orders - and additional income.

The SkyWall 100 product from OpenWorks Engineering found customers and went into operation. The reasons for the interest from potential operators are clear and obvious. This development offers a fairly simple and effective solution to an actual problem that does not impose special restrictions.

A grenade launcher with special "mesh" ammunition is able to effectively catch compact multicopters within a radius of tens and hundreds of meters, and then lower them to the ground for further investigations. At the same time, shooting and preparing for it are not difficult. Other developments of this class do not yet have a similar ratio of performance and performance characteristics, which gives SkyWall 100 a noticeable competitive advantage. 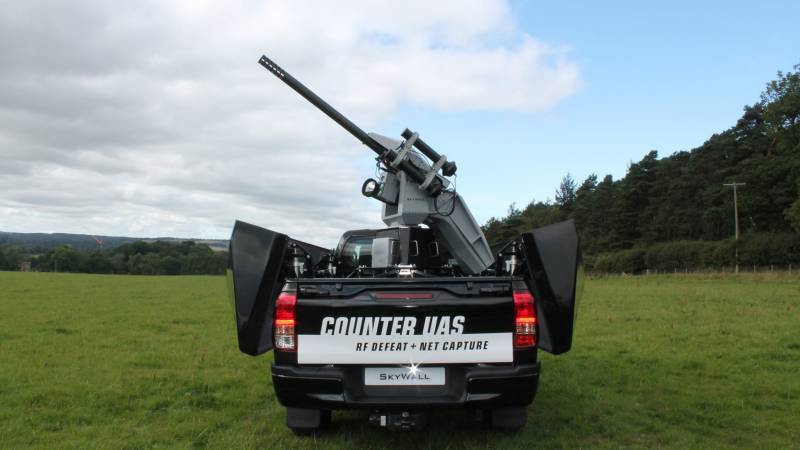 SkyWall Auto complex by car
It is curious that OpenWorks Engineering does not stop developing its anti-UAV systems. On the basis of the SkyWall 100 portable grenade launcher, a similar product, SkyWall Patrol, was created. An automated SkyWall Auto turret was developed for stationary and mobile platforms. Such systems can also find application in different structures and effectively protect given territories from drones.

At present, a variety of anti-UAV weapons are being developed and introduced to the market, working on different principles - capable of suppressing, destroying or landing a target. The commercial successes of the SkyWall family clearly show that catching a drone with a net is quite effective and satisfies potential customers.

Ctrl Enter
Noticed oshЫbku Highlight text and press. Ctrl + Enter
We are
An-12 in AfghanistanMiG-23 fighters in Afghanistan
25 comments
Information
Dear reader, to leave comments on the publication, you must to register.