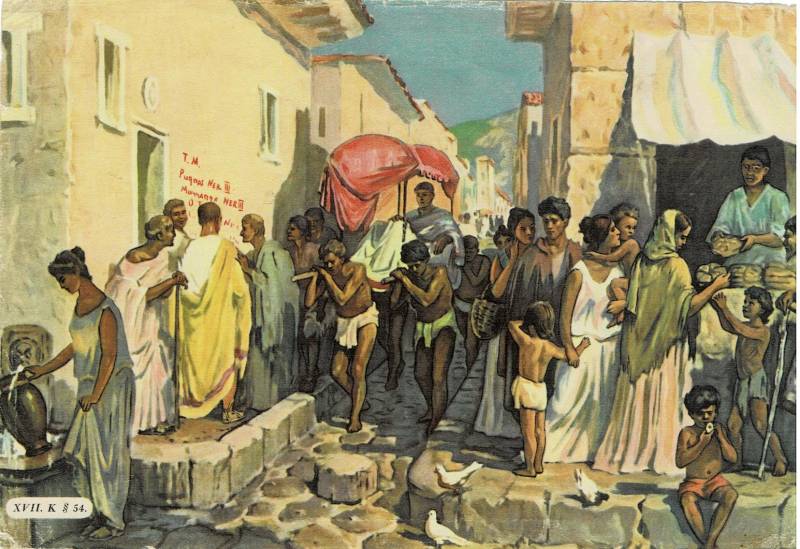 From the pictures in the textbook for the 5th grade in the 60s of the twentieth century, we imagined the streets of ancient Roman cities and the appearance of their inhabitants

A woman should not have men's clothing.
Deuteronomy 22:5

Culture of clothes. We continue the series of articles about the clothing of ancient civilizations. Today we will "go" to Ancient Rome and see how things were with her there. Let's start by thinking about what our modern world owes to Rome? Roman law? Yes, absolutely! All European languages ​​based on Latin spoiled by barbarians? Of course! Plus to everything the basis of the foundations - the Christian faith! Achievements of military affairs: that is, the massive distribution of chain mail, plate armor, horse armor, throwing machines and the first military uniform! That is, the Romans gave a lot to European civilization - in fact, everything. But Roman culture itself largely emerged from the Etruscan culture. In any case, the clothing of the Etruscans, whose civilization reached its peak already in the IV century. BC, is the base for the Roman costume along with borrowings from the Greeks. So, they had a popular decoration for short raincoats - tebenna with a border in contrasting colors, and the Romans also began to use a border on their clothes. The Etruscans wore soft leather shoes with long toes. And the Romans wore the same, however, they shortened the "noses". But Roman fashion also had its own, purely Roman element of clothing, which the Romans were proud of and carefully guarded from foreign influences. The Roman toga is the main type of national dress of Ancient Rome, which developed independently of the influence of neighboring countries and was widely distributed by the II century. BC. The expression "the Romans are a people wearing togas" just testifies to the uniqueness of this type of clothing. The majestic toga is preserved in the Roman Empire as a ceremonial civilian costume, despite the strong influence of Greek culture, the costume of which was both more comfortable and easier for everyday use. Moreover, the Roman tunic and toga have many similarities with the Greek chiton and himation, but differ in constructive and artistic solutions. 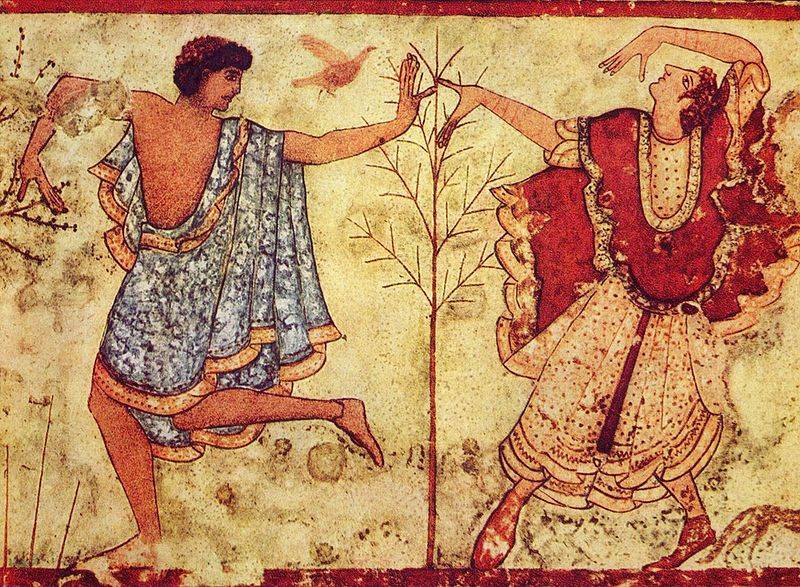 Two dancers. Etruscan master. About 480 BC Wall painting of the tomb of Triclinius, Tarquinia, Italy
Protecting their national clothes from the cultural influence of the fashion of neighboring countries, they simultaneously fought with luxury in clothing, since the Roman ideal was the image of a stern and courageous warrior with characteristic severity, simplicity and the ability to adapt to any conditions. An example of such protection is the dress law of 215 BC. the Roman tribune of Gaius Oppius, which was directed against the excessive luxury of women's clothing and has even been observed for 20 years. But women are women, and in 195, under the pressure of mass demonstrations of Roman feminist women (and there were such people in Rome!) This law was abolished, and the Romans were able to return to their unbridled extravagance. 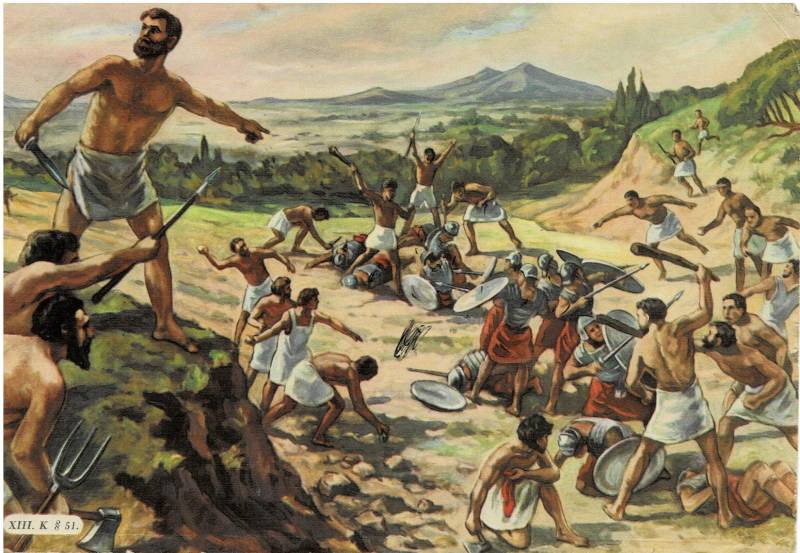 Slaves and warriors. It's very simple, but from what era is it? Well, when did the Romans have such weapons? Never!
Fashion is always highly dependent on the fabric and the width of the loom. The latter made it possible for the Romans to weave wide fabrics, therefore, the clothes of the Romans for a long time were draped, which made it possible to emphasize the natural lines of the body and emphasize its beauty. Woolen and linen were used during the Republic period. During the era of the empire, many imported fabrics appeared, including Chinese silk. The clothes became more closed, with a luxurious finish, and the use of brocade made it possible to make their folds larger and the colors more picturesque, which later became characteristic of East Roman, Byzantine clothes. 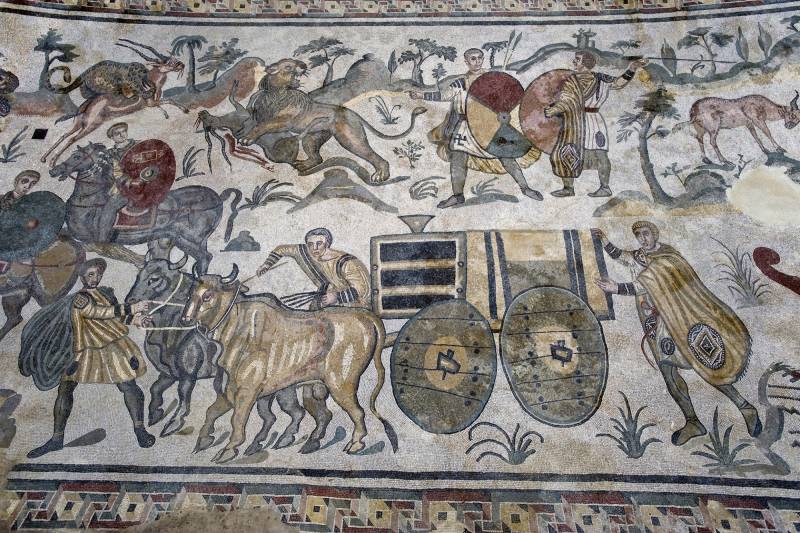 Fortunately, frescoes depicting Roman clothes, statues, and beautiful mosaics have survived to us. And today we can see these mosaics! Villa del Casale is an ancient Roman villa built in the first quarter of the 5th century AD. e. and located about XNUMX km from the city of Piazza Armerina in Sicily. There are many such masterpieces!
It should be emphasized that the toga was the outer garment of a Roman man, but a tunic was used as a garment “under the bottom”, of which there were a great many in Rome. Let's turn to the Brockhaus and Efron encyclopedia for 1891. And that's what we learn from it. Of certain types of tunics were known:

1) tunica palmata, which served as the clothing of the Capitoline Jupiter, the triumphants who received this clothing from the Capitoline temple in case of a solemn entry into Rome and handed it back at the end of the celebration, as well as privileged persons from the Romans or foreigners (foreign kings and magistrates up to the emperor) during solemn ceremonies and festivals;
2) tunica recta, worn by brides on their wedding day and young men on the day of majority (March 17, on the holiday of Liberalia);
3) tunica laticlavia, which served as the clothing of senators and had a wide woven or embroidered purple stripe on the chest (claims), which ran vertically from the neck;
4) tunica angusticlavia, which served as a dress for horsemen and had a narrow stripe on the chest, of the same type as the above-mentioned latus claims;
5) tunica palliolata, or tunicopallium - women's clothing that replaced the table and had the cut of a Doric female chiton. 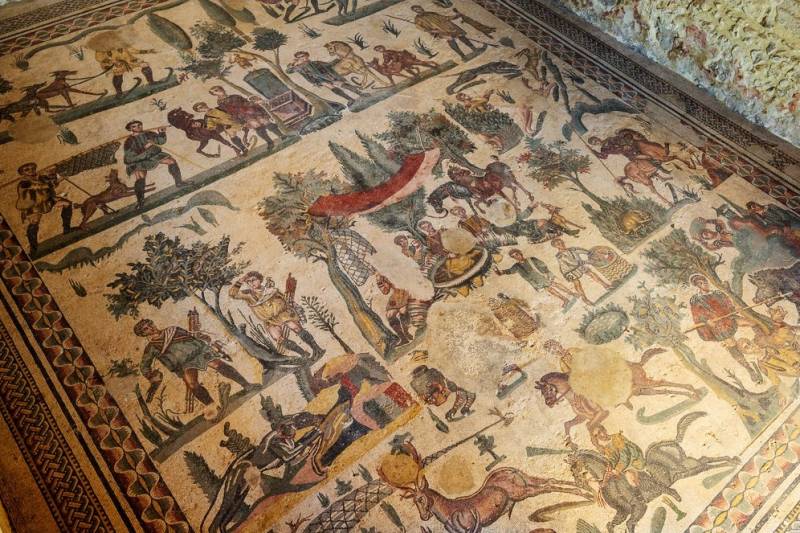 "Big Hunt" Villa del Casale
A kind of tunic was a table shirt that reached the feet and collobium - loose-fitting home clothes, belted at the hips. A tunic with narrow long sleeves (and the Romans knew how to cut and sew them) was called talaris... Tunics were their passport, since stripes were applied to them as decoration - clavuses, and they were different for different classes. For senators, this stripe was usually purple and wide, while for horsemen it was narrow. 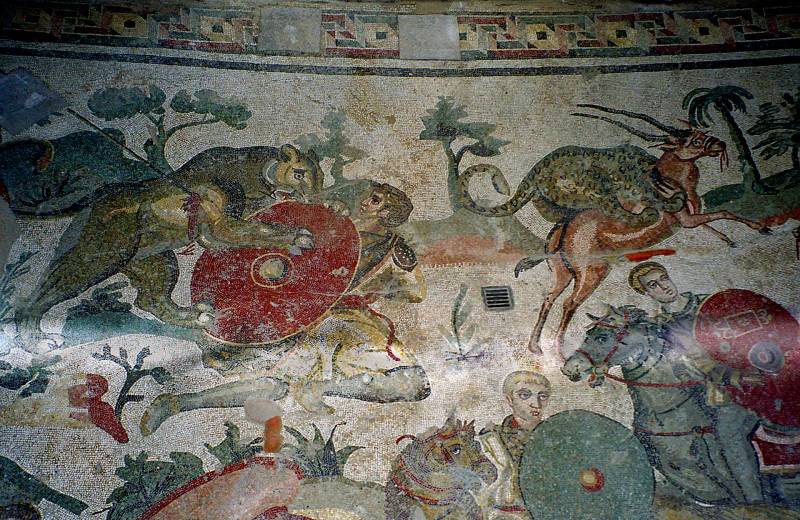 One of the rooms of the villa 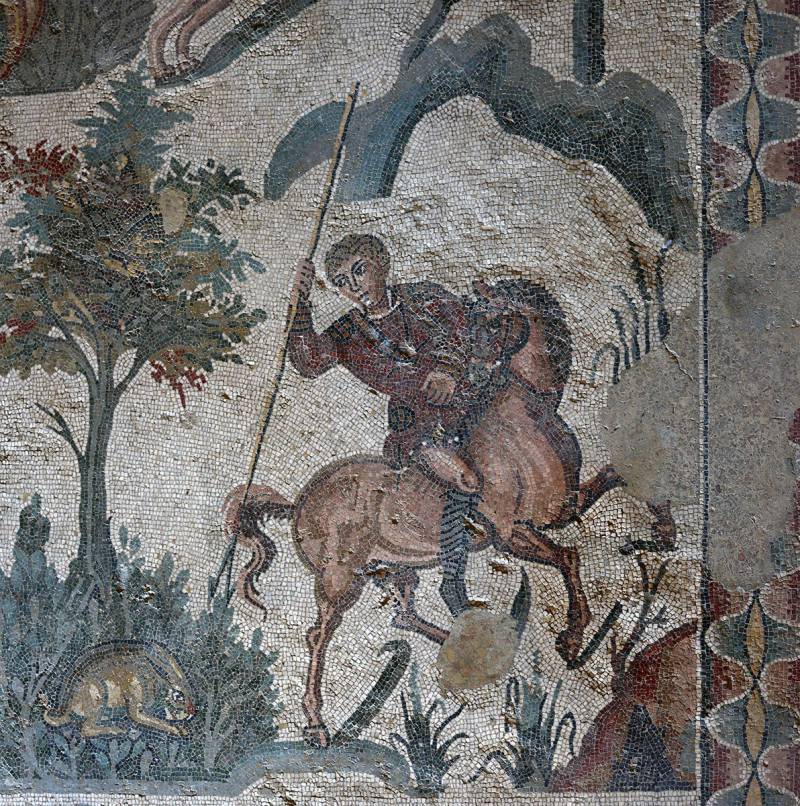 What a two-toothed spear, huh? Villa del Casale
As for the Roman toga, which was wrapped around the body over the tunic, it was a huge piece of fabric - about 6x2 m, cut out in the shape of an ellipse. The drapery of the toga gave an idea of ​​the basic qualities of a person: his education, culture and social status. The art of wearing a toga was studied by the Romans on a par with oratory, it was so "eloquent"! There was even a special Roman law that established fines for violating toga folds. 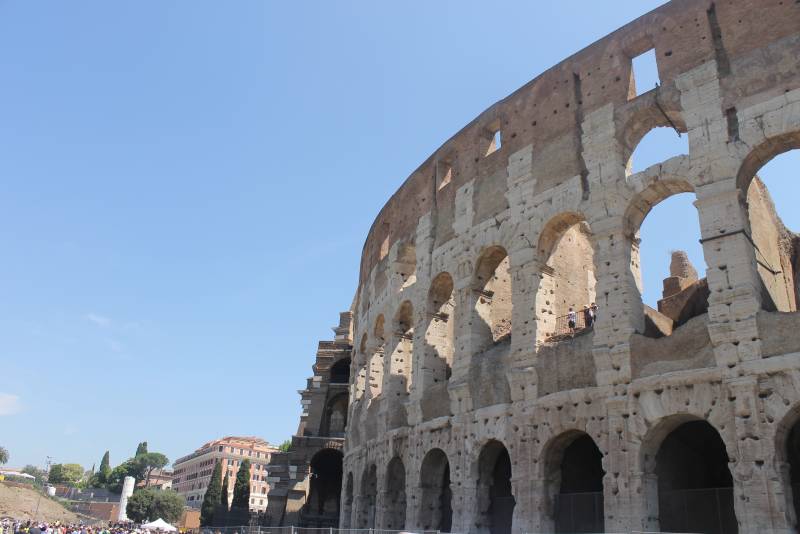 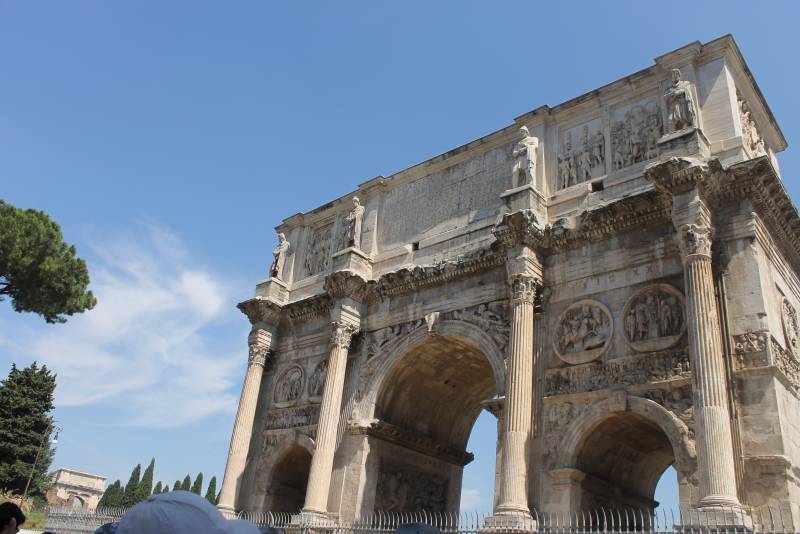 And what kind of ancient arches are there in Rome ...
Toga drapery is very difficult and requires preparatory measures, including the use of special mannequins. The fabric was pre-impregnated with a fixing compound and left overnight in special fixatives. Lead weights were sewn into the lower edge of the toga so that they did not dangle, but dressed in a snow-white toga with a purple border (the imperial toga was completely purple!), The Roman patrician made an amazing impression on a half-dressed slave or poor plebeian. 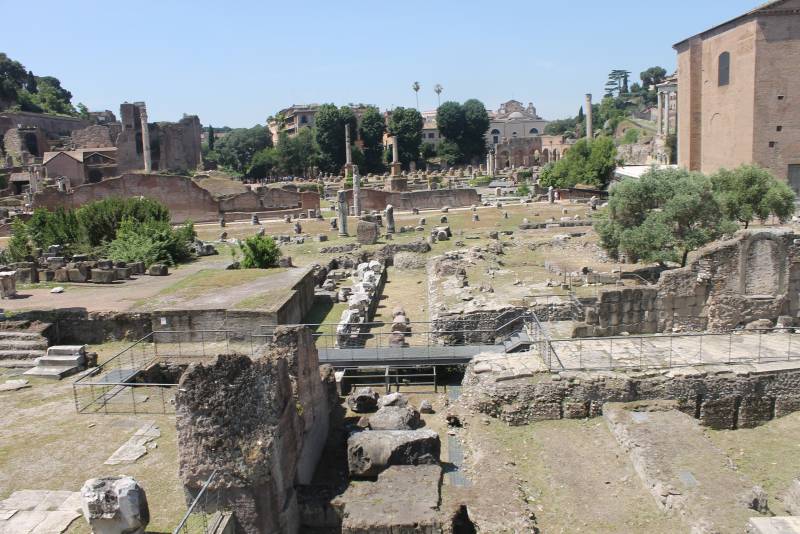 View of the Forum
During the period of the empire, "barbaric" elements appeared in the Roman costume, first of all, the trousers of the "marriage" (which the Persians had long worn) and the Gallic cloak sagumthat become the clothing of legionnaires. 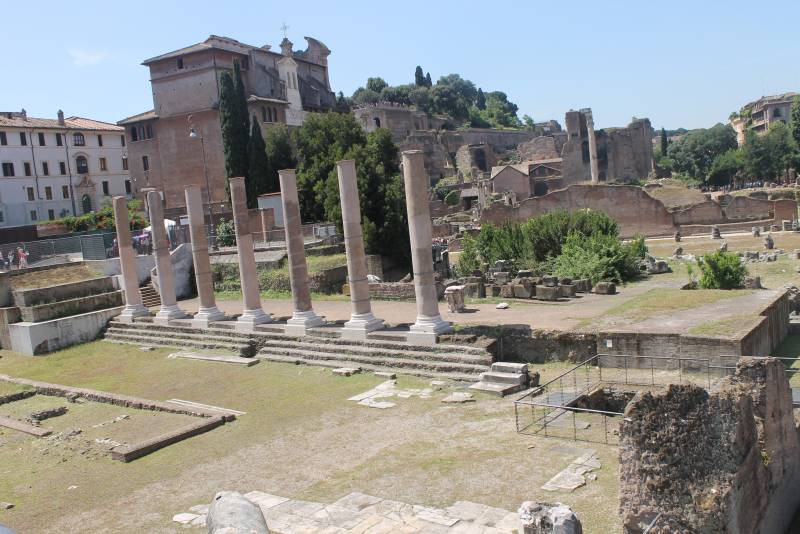 Once upon a time people in togas walked here ...
It is interesting that it was in Rome that the first elements of military uniforms appeared. This is a characteristic uniform shield coloration, practiced by both the Republican and the Imperial army. And the clothes, or rather, their colors. So, ordinary legionnaires wore a tunic of unbleached linen or wool, the "marines" (legionnaires who served on ships) had sky-blue tunics, but the centurions and praetorian guard of the emperors wore tunics bright red, visible from afar. So it was possible to recognize the chief in the crowd of fighters simply by the color of their tunics, not to mention the decorated armor and the transverse crests on the helmets characteristic only of centurions. 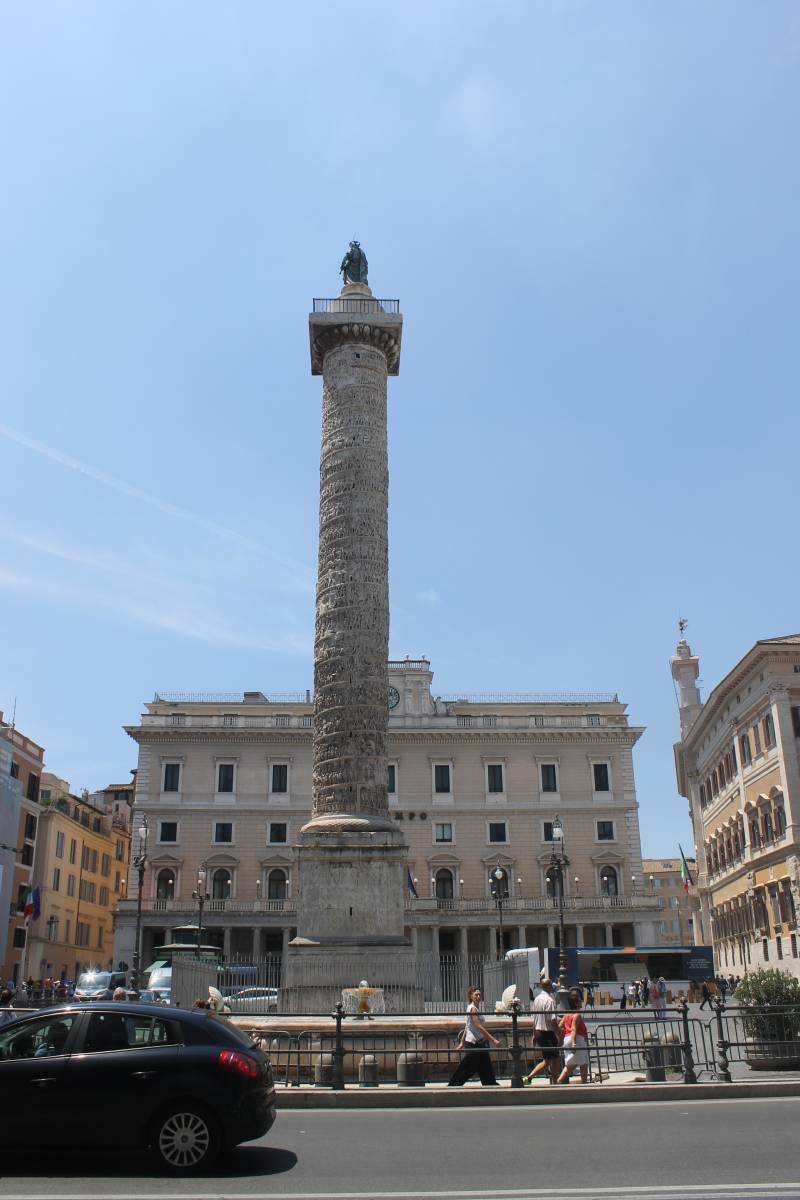 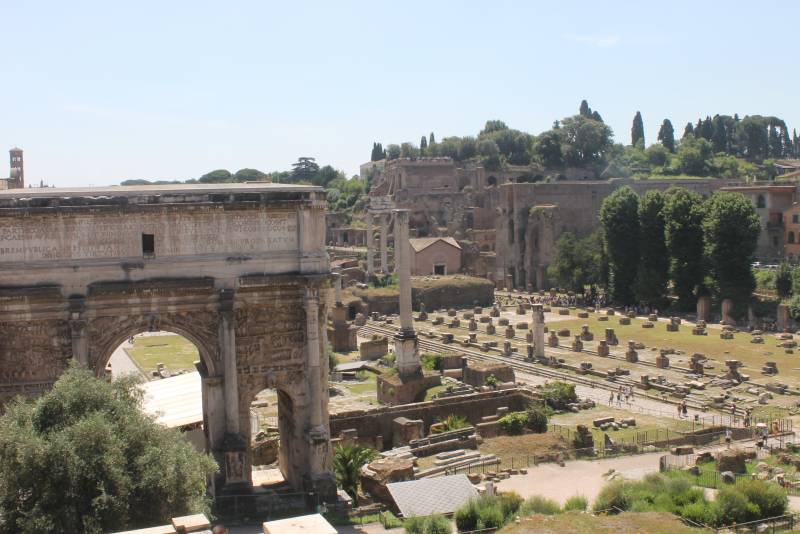 Another arch and columns
With the adoption of Christianity, the role of overhead garments such as dalmatic - a long-sleeved tunic that covers the body from neck to feet. But faith is faith, and no one forbids decorating the same dalmatics, and they are embroidered with variegated ornaments. 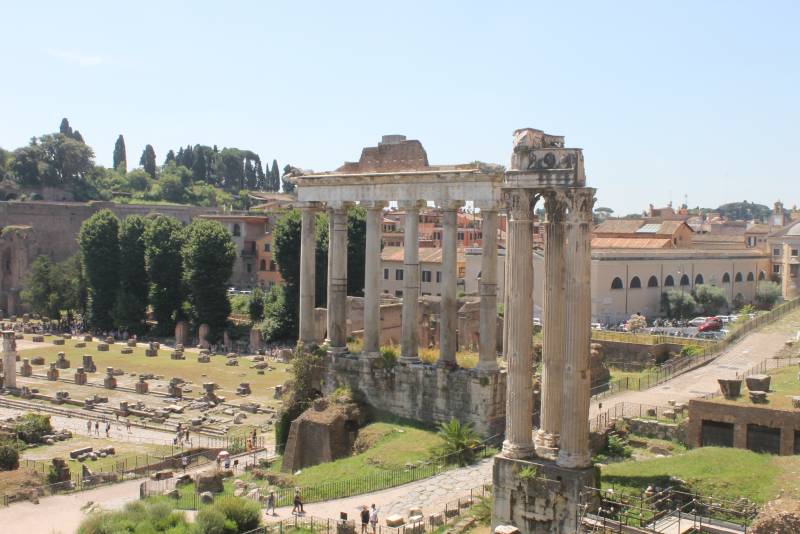 You can go down. But it's very hot down there. The stones are bursting with heat! 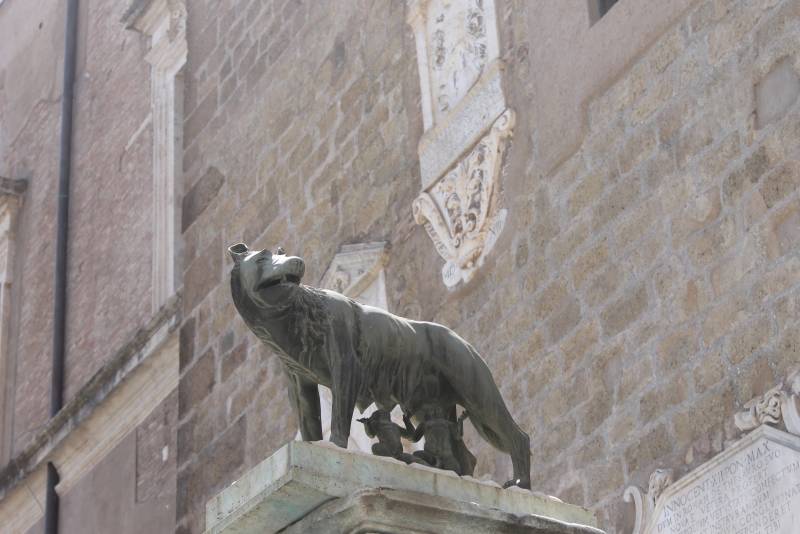 Surprisingly, the famous Roman she-wolf turns out to be far from monumental!
In Rome, there was also a strict division of clothing for men and women, but it was the Romans who became famous for the invention of women's underwear, which neither Egyptians nor Greek women wore in a complete, so to speak, “top and bottom” set. Since small breasts were considered ideal, special tight bandages were used - fasciasin addition, soft leather bandages were used - mamillare (they were worn on a naked body, including gymnasts and acrobats) and stropium, which was worn over the lower tunic, but under the top. Over the tunics, Roman women wore a Greek cloak pallu with a fastener on the shoulder, it also served as a headdress, since the edge of it could be thrown over the head. The colors of the palla were very diverse: purple, lilac, pink, blue, yellow, ocher ... 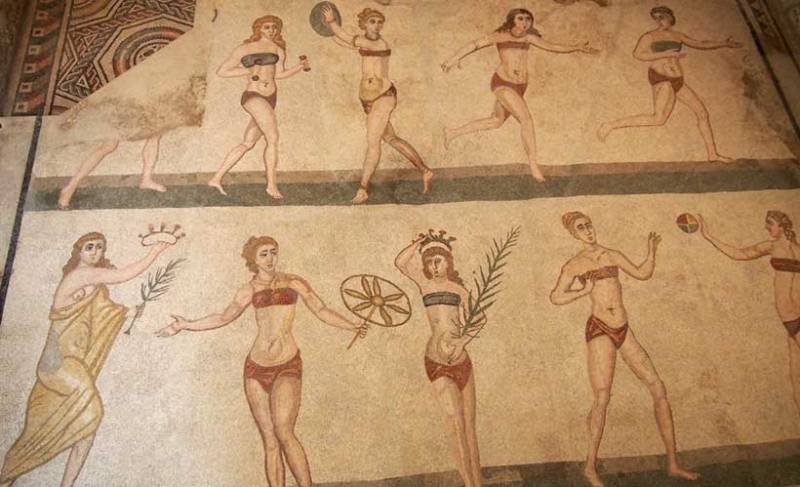 "Girls in Bikinis" from The Chamber of Ten Girls. Another Roman mosaic of the same Villa del Casale
The shoes were very basic. The red leather shoes of the nobility were called mulleous and was a sandal of woven straps, sometimes with a heel, but usually open toes. Sozzi, soft leather slippers, usually worn at home. Calighe ("Shoes") were legionnaires' footwear and were thick leather soles, lined with nails, attached to the leg, again with the help of many leather straps that went to the ankle, and even to the knees. Emperor Guy Caligula just got his nickname Slipper because he wore soldiers' sandals as a child. 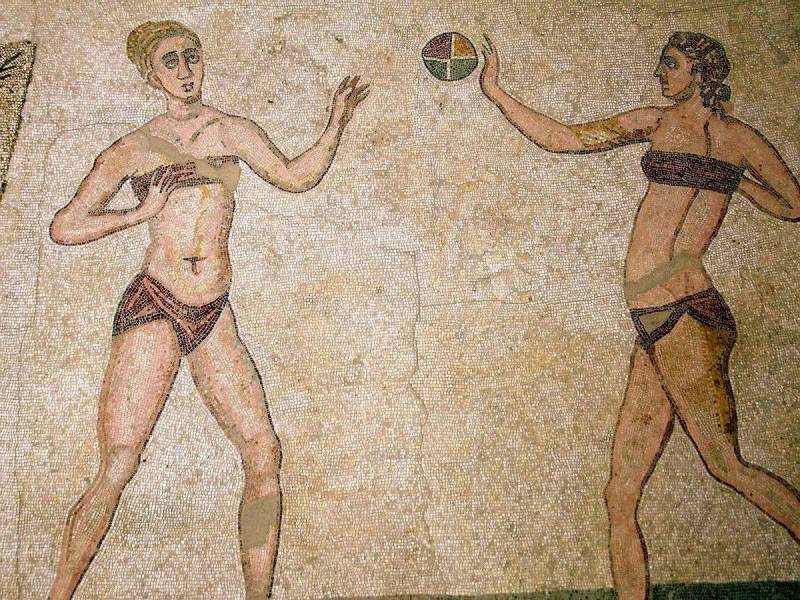 “Come on, the sun, the spray is brighter, burn with golden rays ...” What “sports girls”, however!
The face of a man in Rome was shaved, at least in the era of the Republic. Shaved their face, judging by the sculptures, and Julius Caesar, and Octavian Augustus, and Flavius ​​Vespasian, and Mark Trajan. But the emperor Hadrian wore a small beard with a mustache, and it was he who introduced the fashion for beards and mustaches in the empire. 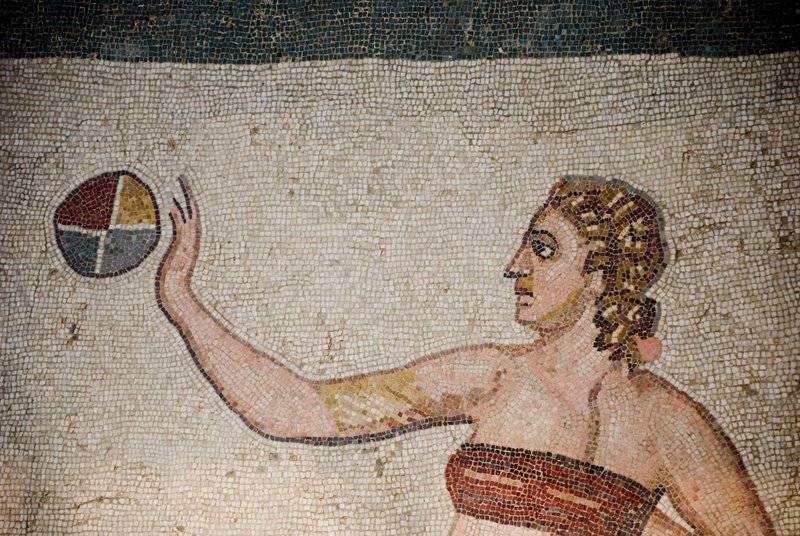 The quality of the work is amazing
Blond golden hair, similar to that of the Germans, as well as metallic hair, have always been in fashion. A variety of methods have been used to lighten hair, from applying ash mixed with goat's milk to lightening it in the sun. 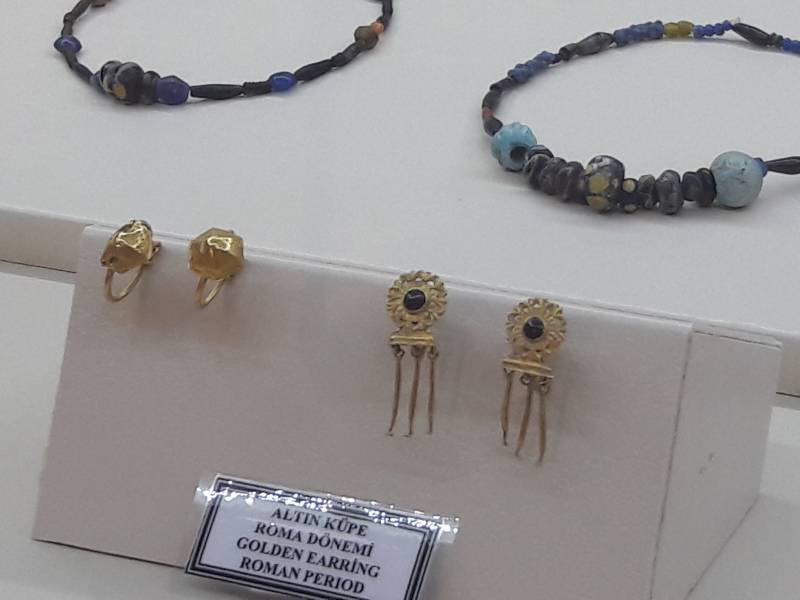 And the Romans and Romans also loved jewelry!
Lead combs were also used, so that a Roman or a Roman, combing her hair, still dyed her hair at the same time. And, of course, decorations were used. Signet rings, rings, tiaras, gems and cameos, earrings and all kinds of bracelets. Ah, what only the ancient Romans did not wear then! Especially in the last centuries of the empire, when the Romans rejected all ideas about the harsh life and completely indulged in idle luxury and languid bliss! 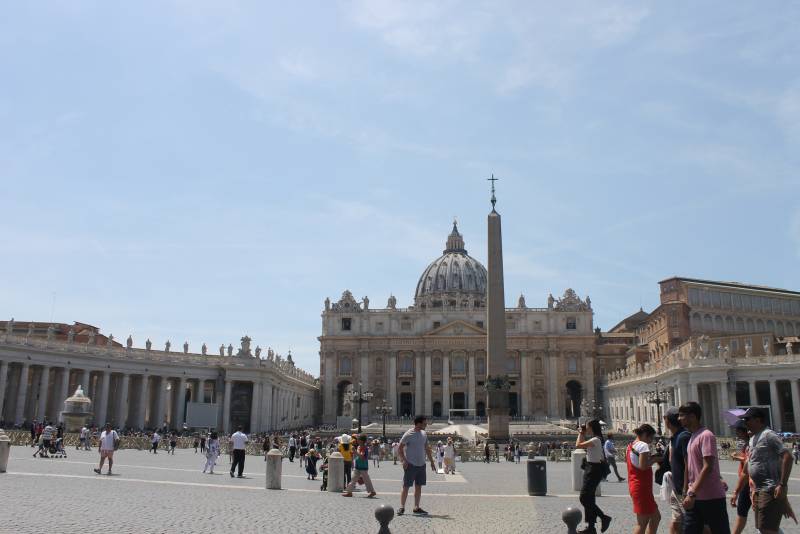 But from this bus station we are leaving Rome today. The question is expected: so this is St. Peter's Cathedral, what is the bus station? But he is exactly here and is! A huge, simply monstrous bus station is located just under this square!

Author:
Vyacheslav Shpakovsky
Articles from this series:
Interesting secrets of the kimono
Clothes of the ancient Jews: everything according to religious canons
Clothing of the northern "barbarians"
Bull skin and wooden slippers: clothes of hunters and warriors of the Stone Age
Ancient Egypt: clothing of the pharaohs, warriors, peasants

Ctrl Enter
Noticed oshЫbku Highlight text and press. Ctrl + Enter
We are
Chernobyl notebook. Part of 3Father told
159 comments
Information
Dear reader, to leave comments on the publication, you must to register.