Who invented the Ukrainization of Rus 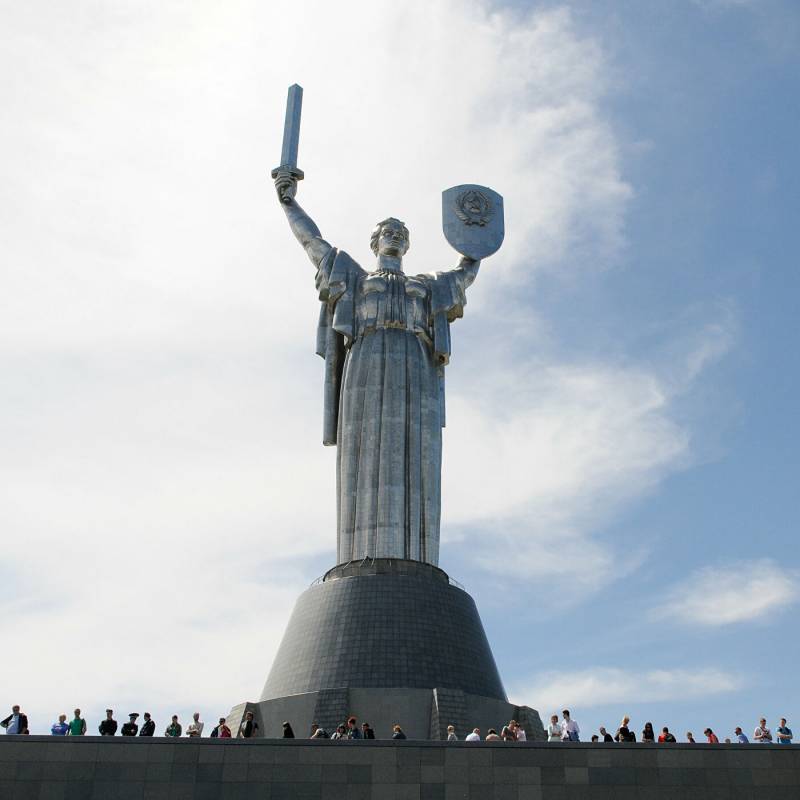 The fate of the "Ukrainians" is truly tragic. Tens of millions of Russian people were christened "Ukrainians" in the interests of ideology and politics without their consent.

Over the decades of the Soviet and "independent" eras, they lost their national identity to varying degrees, becoming people with artificial ethnicity, although they are not "Ukrainians" in terms of language, origin, faith, culture and identity. But they do not recognize themselves as Russians, since for more than a century they have been indoctrinated with the idea of ​​their Ukrainianness.

The Ukrainian problem is of great importance for the fate of the Russian world and people. We are talking about tens of millions of people who became Ivans, who do not remember kinship. They are Russian by birth and at the same time "Ukrainians". Part of the Russian people, which in the 1917th century the ideologists of independence dubbed "Ukrainians". And after XNUMX, this ethnic chimera was politically consolidated by the Bolsheviks-internationalists, officially designating an artificial people in Soviet passports. Several generations of people born in the USSR and the Ukrainian SSR, brought up by an international ideology (about the "fusion of nations" into the Soviet people), are used to being "Ukrainians." Although their ancestors were Russian, they did not lose the Russian language, Russian culture, and faith. For them, Mazepa and Bandera are enemies.

And after complete "independence" in 1991, when the greater Russia (USSR) was dismembered in the interests of the West and its local clientele, the "Russian-speaking", as they were shamefully dubbed, were placed in the position of outcasts and outsiders. This was the root cause of the current turmoil in Ukraine. The independent oligarchic-criminal government started a real war of extermination, started the cultural, linguistic, informational and socio-economic genocide of Russians in Ukraine. So, recently the former head of the Ukrainian government, Mykola Azarov, admitted that during the years of "independence" Ukraine has lost 20 million people. The population of the republic decreased from 52 to 32 million people. About half of them fled abroad in search of work. Millions of people died out due to the collapse of the national economy, the health care system, carried out in the interests of the West (IMF) socio-economic "reforms". This is the result of the policy of self-appointed thieves and thieves: the extinction and poverty of millions of Russian people.

This is a real war to exterminate the Russian people (in this case, its south-western part). It is being conducted in all directions: information and ideological, historical, cultural, political and economic. In fact, since 1991, Russians have been living in an occupied country. The invaders in the form of soldiers are practically absent, but the indigenous "elites" and "creative" intelligentsia do well with the genocide of Russian-Ukrainians. Russian is outlawed, as is Russian (Soviet) история and heroes. All means destroy Russian culture and art. Instead of them, a “sharovarny” surrogate was introduced, full of malice and slander. The scientific, educational, industrial and transport potential of Ukraine (the richest republic of the USSR) has been almost completely destroyed. There are only branches and enterprises that are focused on exporting resources and raw materials abroad. Millions of people have become superfluous, useless to anyone. They were turned into "white slaves" of the European Union. In some respects, the times of Bogdan Khmelnitsky have returned, when they tried to turn the Russians of Little Russia into "slaves" (slaves) of Polish masters. To deprive them of faith, language and history.

Thus, the only way to preserve the southwestern part of the Russian ethnos, as in Khmelnytsky, is immediate reunification with the rest of Russia. Complete denazification, elimination of Ukrainians as an ideological and political instrument of the West's aggression against the Russian world. Return of Russianness to Russian-Ukrainians. A common constructive Russian project aimed at the future.

It must be remembered that before the First World War (1914), most of the inhabitants of the Little Russian provinces identified themselves as Russians. Galicia was also a stronghold of Russianness (nowadays the camp of neo-Bandera, Nazism). The ethnic composition of these lands has not changed from the time of Ancient Rus until the present day. Princes Svyatoslav and Vladimir, Vladimir Monomakh and Daniil Galitsky, Bogdan Khmelnitsky and the Vishnevetsky princes were Rus-Russians. Until 1697, Russian was the official language of the Grand Duchy of Lithuania. Nothing has changed in the XNUMXth-XNUMXth centuries.

The Ukrainian project was created by the Polish ruling circles and the Catholic clergy with the aim of colonizing the western and southern Russian lands. Three hundred years of Polish-Catholic domination in western Ukraine of Russia brought its poisoned fruits: the emergence of Uniatism (subordination of a part of the Russian Church to the Vatican), the polonization of the Russian language (the beginning of its transformation into "Ukrmova"), the displacement of Russian education, traditions and customs by Polish ones (Westernization), the polonization of the Russian elite. The clans of the Western Russian princes and boyars - Ostrog, Zaslavsky, Slutsk, Vishnevets, Czartorysky, Pronsky, Ruzhinsky and many others. others, pollinated. The decisive factor in assimilation then was the change of faith (Catholicization), which led to a cultural and political reorientation to the West. Former Russians became Westernizers, severing ties with the Russian world.

However, the Westernization of the West Russian nobility did not lead to the assimilation of the entire people. Although there were losses, especially in the field of culture. The people in Little Russia have not lost their Russianness, preserved their faith, language and traditions. This predetermined the victory in the national liberation war, which was started by Bohdan Khmelnytsky. By the way, the Russian hetman very clearly defined the essence of the war with the Poles: "who want to eradicate the Church of God, so that the Russian name is not remembered in our land."

One of the manifestations of the Polish occupation of South Russia was the emergence of the "Mova". Without Polish domination, there would be no Ukrainian language. Movu is distinguished from the Russian language by the presence of a huge number of polonisms - words borrowed from the Polish language. Therefore, Mova is not an independent language, but the Russian-Polish dialect (dialect). During the occupation, Mova became closer and closer in its vocabulary to Polish. After the reunification of the southern and northern parts of Russia in 1654, the influence of the Polish language ceased and the displacement of Polonisms began under the influence of the common Russian literary language. By the way, the most important role in the creation of a common Russian literary language was played by immigrants from Little Russia: Melety Smotrytsky, Epiphany Slavinetsky, Arseny Satanovsky, Simeon Polotsky, Feofan Prokopovich. Since 1991, the South Russian dialect (Mova) has again undergone Polonization and Westernization. The media literally "created" new Ukrainian words.

Thus, the Little Russian (Ukrainian) language is just one of the dialects, one of the dialects of the Russian language. During the period of feudal fragmentation, Novgorodians, Ryazanians, Smolenskians, Muscovites, etc. had their own differences in language. The Polish ukraine also developed its own dialect.

As noted above, before the First World War, the overwhelming majority of the inhabitants of Little Russia (including Galicia) considered themselves Russians. The ideology of Ukrainians, created in Poland and supported by the Austro-Hungarian authorities with the aim of preserving the Western Russian regions (Galician, Transcarpathian Rus) as part of the empire, was the lot of an extremely narrow, small group of intelligentsia that had no influence in society. During World War II, the Austrian authorities staged a genocide of Rusyns (Russians), destroying the Russian identity in all their might in the eastern regions of the Austro-Hungarian Empire and in the occupied territory. Ukrainian nationalism was actively supported in order to forever split the West Russian regions from Russia.

The first major wave of Ukrainization took place after the 1917 revolution and the turmoil that began in Russia. Artificial "Ukrainian" regimes (Central Rada, Hetmanate, Directory) tried to organize an attack on the Russian language, culture and history. However, they were limited in time and did not have the appropriate resource. Therefore, everything looked extremely caricatured and did not have any support among the people. Everything was limited to the change of signs in government offices and shops, the expulsion of Russian employees who did not own language.

After the creation of the Ukrainian Soviet Socialist Republic (Ukrainian SSR) in 1919, the business of Ukrainization went more vigorously. All government agencies were involved. There were even "troikas for Ukrainization" to translate Russians into MOV. Not only were documents, signs and newspapers translated into Newspeak, but it was also forbidden to speak Russian in offices. It came down to outright terror. The rampant Russophobia lasted for about a decade. However, during the period when Stalin seized control of the internationalist revolutionaries and Trotskyists, many rabid Ukrainians set out to cut wood in the camps. Officially, Ukrainization was not abolished, but in fact it began to be phased out by default.

A new wave of Ukrainization began with the German occupation during the Great Patriotic War. Ukrainian Nazis welcomed the Nazis and pinned great hopes on them. Newspapers in Russian were closed again, and only Ukrainian was allowed in institutions and education. Hitler at any cost tried to reduce the number of the Russian people in order to weaken the resistance to the occupation regime as much as possible. Ukrainization has become a very convenient form of cultural, linguistic and national genocide. The more Ukrainians, the fewer Russians. It was necessary not only to crush Russia, but to split the Russian ethnos, to push together parts of the great people. Divide and rule! The Red Army put an end to Hitler's plans and the dreams of the Ukrainian Nazis about an "independent power" under the protectorate of the "Millennial Reich".

Another wave of Ukrainization began under Khrushchev, but it was curtailed under Brezhnev. Without state support, the Ukrainian chimera began to degrade and die. However, the collapse of the Soviet Union made it possible to return to Hitler's plans: to split the Russian people into several parts hostile to each other in order to weaken it and ensure the rule of the new colonialists.

Ctrl Enter
Noticed oshЫbku Highlight text and press. Ctrl + Enter
We are
A.Dugin. Geopolitics of Russia of the twentieth centuryOn the other side of the “red” and “white”. Izborsk Club Report
191 comment
Information
Dear reader, to leave comments on the publication, you must to register.