According to the precepts of "Ferdinand": the United States is ready to adopt a hybrid Bradley 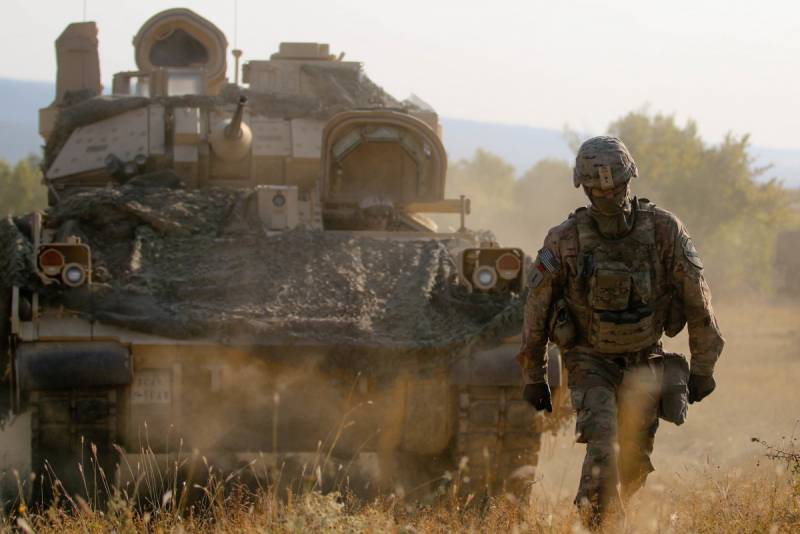 Progress does not stop

The military has always loved everything new. Often, an unlimited budget allowed you to experiment and choose the best solution from the proposed ones. And now the Office of Critical Technology of the US Army has allocated 32 million dollars to develop an electric transmission for the Bradley BMP. Apparently, the engineering staff in the United States realized the futility of further improvement of internal combustion engines and switched to alternative technologies. The good old scheme of driving propellers with electric motors, tested by Ferdinand Porsche on his anti-tank self-propelled guns, turned out to be in demand in the United States. The British BAE Systems is responsible for the technological part, working in collaboration with QinetiQ, which has designed the Modular EX-Drive electric transmission. This block of motors is located across the body and drives the driving wheels of the armored vehicle. As mentioned above, the American Bradley is initially supposed to be used as a model. 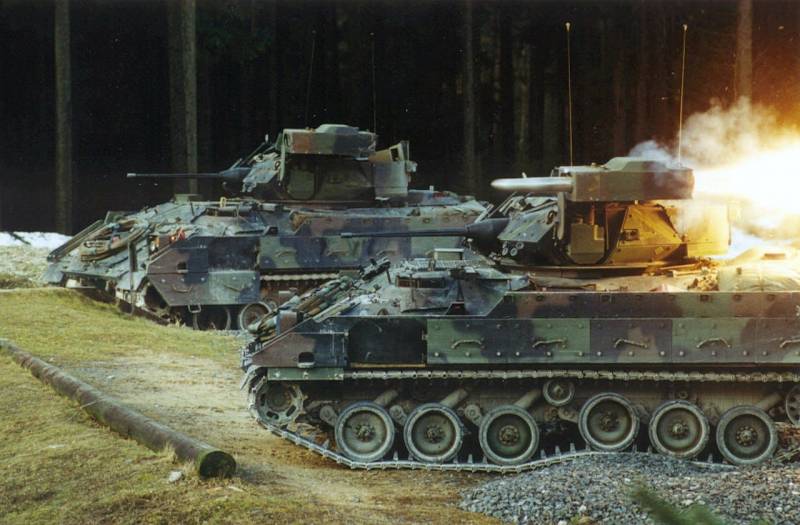 Source: ukdj.imgix.net
The obvious advantage of this solution will be the reduction in loads on the main motor, which plays the role of a generator. The absence of a rigid connection with the transmission should have a positive effect on the resource of the diesel engine. The engine speed with the electric drive of the drive wheels is fairly stable most of the time, which, in turn, reduces the average fuel consumption. But the main bonus from the electric transmission is the almost inexhaustible source of power supply for onboard equipment. If earlier it was required to build powerful generators for such purposes, and often auxiliary power plants, now there will be no need for them. BAE Systems claims that electric motors are lighter and more compact than hydromechanical transmissions. Even fifteen or twenty years ago it was hard to believe, but now there is every reason for this. Taken together, the Modular EX-Drive electric transmission replaces the mass of auxiliary equipment, which ultimately gives a gain in mass. Yes, and progress in the field of electric motor construction did not stand still: equipment in many ways became lighter and more compact. 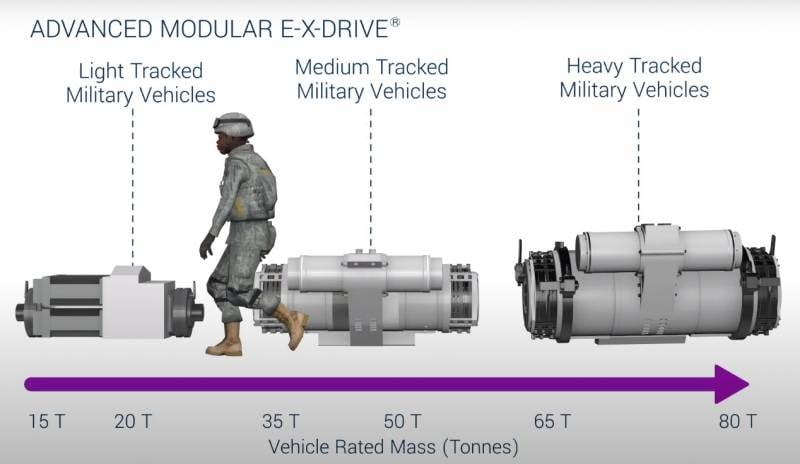 Various variations of the Modular EX-Drive. Source: youtube channel QinetiQ
QinetiQ has so far developed three sizes of electric transmission. For light armored vehicles Light Tracker Military Vehicles, for "middle class" - Medium Tracker Military Vehicles and for heavy vehicles (up to 80 tons) - Heavy Tracker Military Vehicles. QinetiQ has already tested prototypes on all three categories of armored vehicles, including tanks Abrams. The advantage of the Modular EX-Drive modular system, which QinetiQ has been developing since 1998, is the ability to integrate with minor alterations into almost any modern engine-transmission compartment of US Army armored vehicles. The main integration options can be AMPV (armored multipurpose vehicle), M109A7 self-propelled guns and MLRS (Multiple Launch Rocket Systems) MLRS family. 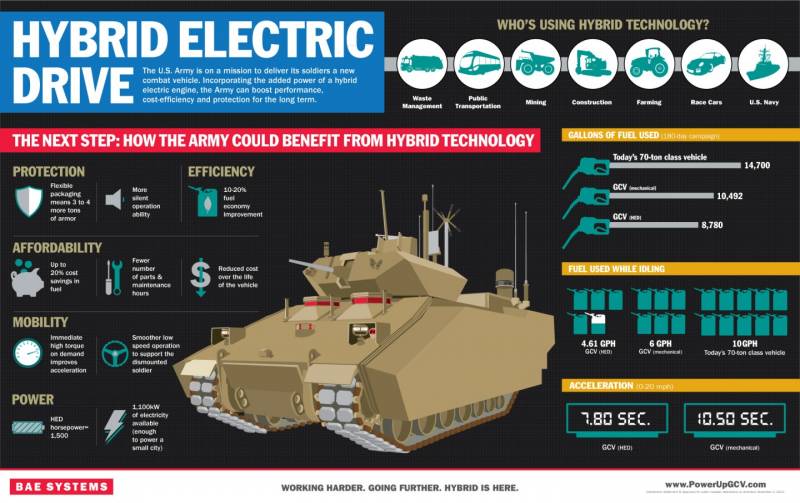 All bonuses are HED. And not a single minus. Source: assets.newatlas.com
The attentive reader will surely notice that the title of the article mentions the hybrid Bradley. Indeed, electric transmission is the main, but not the only part of technical innovation in the US Army BMP. All this electric историяinspired by the German Ferdinand self-propelled gun, it is part of a large Hybrid Electric Drive (HED) system. Since there is a hybrid drive, then there must be a battery that powers the electric motors. In the case of the Bredley-HED, this is a lithium-ion battery pack that works in sync with the base engine as needed, increasing vehicle speed, or independently powers the Modular EX-Drive electric motors.

The heaviest EV module. Source: greencarcongress.com
Here the key advantage of the whole venture is realized - noiseless operation in a fully battery mode of operation. Such an infantry fighting vehicle can sneak unnoticed near the enemy, taking the most convenient position for an attack. An inoperative diesel engine sharply reduces the thermal signature of the BMP for both observation systems and seeker heads. Another thing is that a hybrid drive requires rather big batteries for such a heavy car, which, obviously, completely destroys all weight savings. And it's hard to believe in BAE Systems' statements about the compactness and lightness of the novelty. Even taking into account the fact that Modular EX-Drive electric motors also act as generators for regenerative charging of batteries. The second serious disadvantage is the potentially high fire hazard of lithium-ion batteries. There are already enough flammable substances on board the combat vehicle, and then there is lithium, which cannot even be extinguished with foam and water. In general, one can argue for a long time about the combination of advantages and disadvantages of the new product from BAE Systems.

As mentioned above, the Modular EX-Drive can also be mounted on wheeled vehicles. The schematic diagram of the device does not undergo major changes, only a compact electric motor is installed on each wheel. Axles, driveshafts, transfer cases and gearboxes can be thrown away. In such a "wheeled train" only the internal combustion engine, generator, wires and motor-wheels remain. All that remains is to plug it into a smart control system, and the electric transmission is ready to go into battle. Something similar was implemented on the German Genesis technology demonstrator. 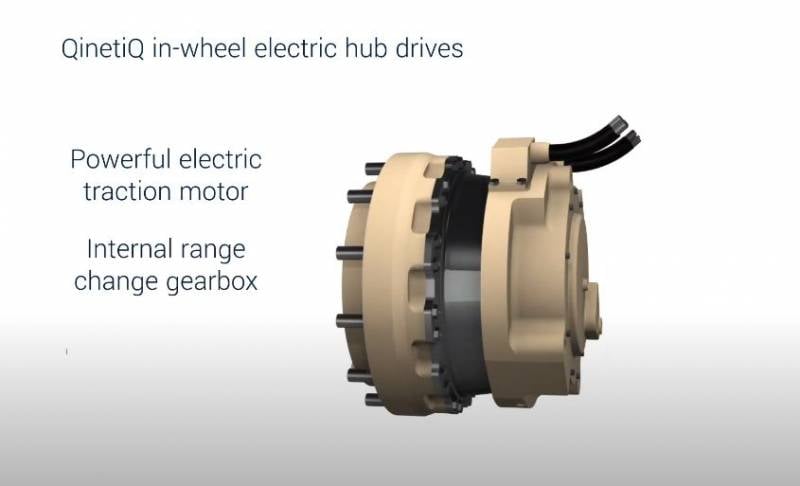 Modular EX-Drive motor-wheel. Source: youtube-channel QinetiQ
This eight-wheeled platform, similar to the technique from a cheap science fiction movie, is equipped with a 1860-horsepower motor generator. The wheels can rotate independently of each other, which should provide good cross-country ability and maneuverability. Naturally, there is a battery pack, on the energy of which Genesis can travel up to 150 kilometers. I will clarify that this is the developer's data, they can seriously disagree with reality. Moreover, this is only a technology demonstrator. In military hybridization technologies, the multiple complication of the technical component is confusing. Instead of time-tested solutions, engineers go not even to evolutionary development, but immediately to the electromechanical revolution. And it is known that the more complex the system, the more vulnerabilities it has and the less reliable it is. If even in the civilian sector hybrid technologies have taken root very conditionally due to excessive complexity and mass, then in the military environment this will be even more problematic. Is the ephemeral reduction in noise and visibility worth such technological tweaks? The feeling that progress in this area is only for the sake of progress itself. 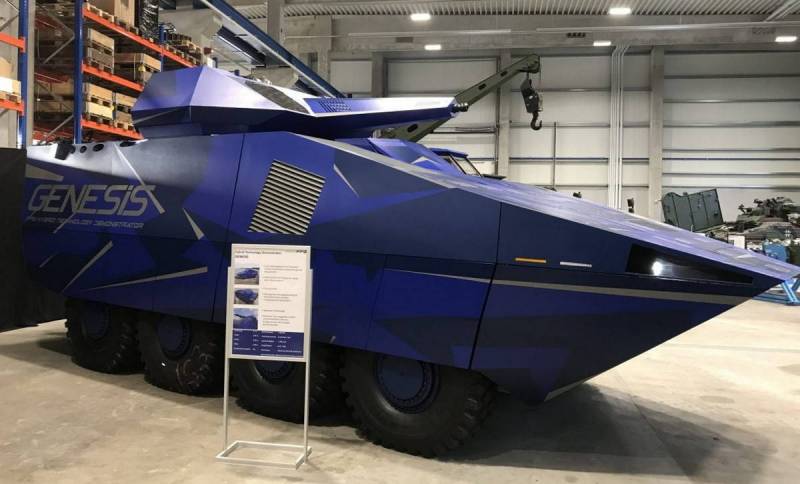 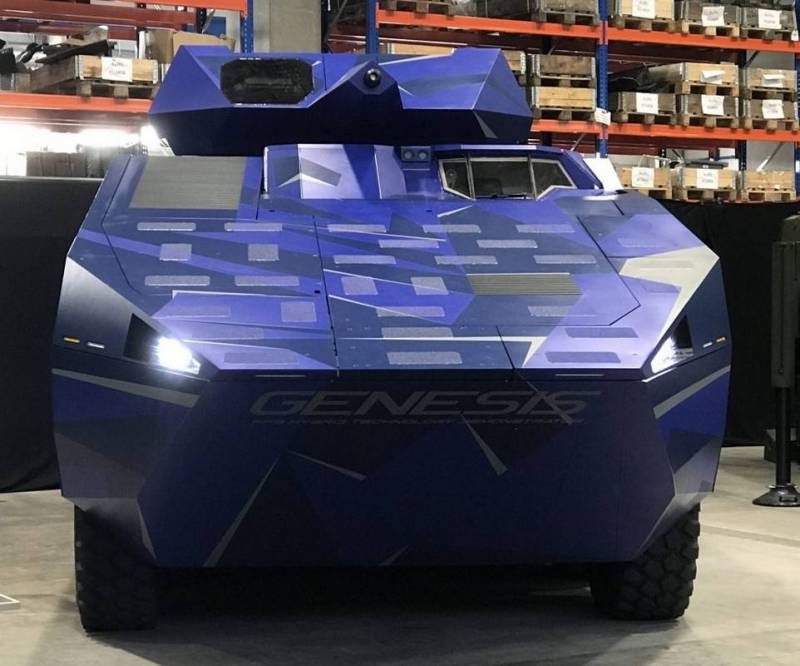 Hybrid Genesis. Source: invoen.ru
Where will armored vehicles go next? If prototypes are already appearing, complicated by systems for reducing fuel consumption taken from the automotive world, then this line of development will continue in the future. Now in press releases, military corporations do not hesitate to mention the environmental friendliness of their armored vehicles. With such a history in the future, tanks may well have exhaust gas recirculation systems and multi-stage particulate filters. In the end, the army will refuel its equipment not only with diesel fuel, but also with urea, which is now fashionable, without which no diesel engine in Europe can do without. In the absence of urea in the tank, the automatics will independently limit the engine power, so that the tanks do not pollute the atmosphere with excessive emissions. It's ridiculous, of course, but the most sophisticated fuel saving technologies coming in the army, it is quite possible, will bring with them the greening of armor.

Ctrl Enter
Noticed oshЫbku Highlight text and press. Ctrl + Enter
We are
Bradley family of combat vehicles keeps pace with the timesOverview of armored transporters and infantry fighting vehicles (Part of 1)
68 comments
Information
Dear reader, to leave comments on the publication, you must to register.