Both laughter and sin: winter equipment of Wehrmacht soldiers in 1941-1942 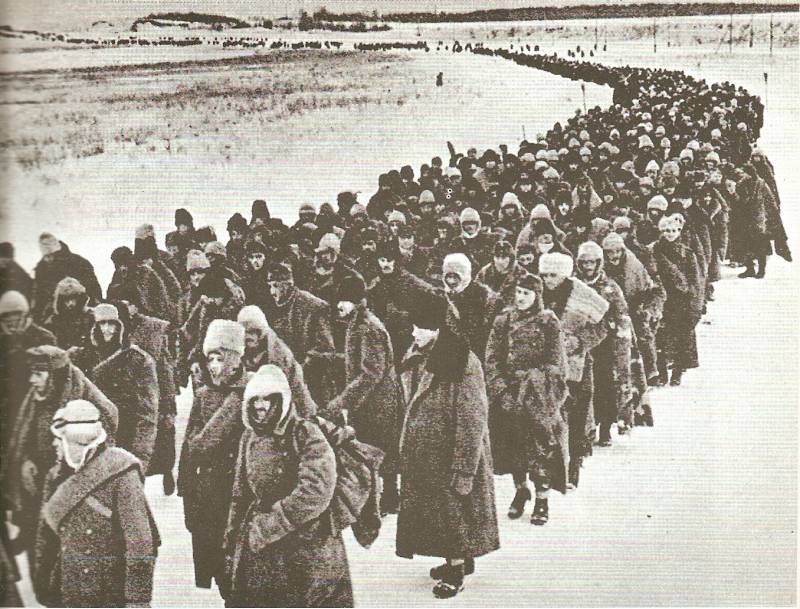 The issue of the absolutely disastrous provision by the military and state leadership of the Third Reich to its own army, which was fighting on the Eastern Front, with winter uniforms and equipment, remains for many one of the most inexplicable mysteries of the war period. How could the Germans, with their pedantry and desire to take into account everything to the smallest detail, could have miscalculated so cruelly and in fact turned over their soldiers to the slaughter of "General Frost"?


Surely each of us knows the photographs of soldiers of the German and allied troops who surrendered after the crushing defeat at Stalingrad. This public looks the most miserable, downright ridiculous - mostly because, instead of military uniforms, these "conquerors" in their attempts to escape from the severe frost have put on something unimaginable. Women’s shawls and cloaks, pieces of carpets and curtains, bunches of straw on our feet ... It's a shame, not an army!

Let me tell you a little secret: Soviet military photojournalists then had big problems - the editorial staff flatly refused to accept the footage, after watching which one got the impression that the Red Army in fierce battles defeated not the most powerful army in Europe, but a gang of some wretched skiers. However, no others were available. It is incredible, but true: in the first two military years, the command of the Wehrmacht was never able to establish a normal supply of field infantry units with equipment suitable for winter war.

Generally speaking, this история - an excellent lesson for those who love to extol our "civilized" and "highly organized" enemies, whom the "gray-footed Red Army men", led by "illiterate marshals", managed to "fill up with corpses" exclusively. Okay, in Germany they have always despised the French and, obviously, because of this, the memoirs of those of them who became victims of "General Frost" in 1812 were not given a penny. But the Germans themselves not only fought, but also lodged on the European territory of the USSR during the First World War and the Civil War! And many of those who then fully knew the delights of our winter, in 1941 were in the ranks of the Wehrmacht, including in command positions.

And yet, starting the war with the Soviet Union in 1941, the Nazis generally planned to provide only every fifth soldier with winter uniforms! This is not fiction, but the testimony of Colonel General Guderian. Summed up colossal self-confidence: the war was expected to be completed in six weeks, and then relax in the captured "winter apartments". The fact that the "blitzkrieg" would not take place, or at least did not meet the originally planned timeframe, became clear by the end of the summer. In any case, the high command of the Wehrmacht started talking about the need for the general supply of its own personnel with winter clothes only on August 30, 1941.

It was planned to make each soldier happy with two sets of cloth uniforms appropriate for the climate: a hat, headphones, warm gloves, a scarf, a fur vest, woolen socks, and three woolen blankets to boot. Nevertheless, being confident about the completion of the main hostilities before the cold weather, they did not connect the main capacities of the defense industry to support this task, "hanging" it on secondary enterprises. As a result, it, in fact, was disrupted.

In what way did the “Aryans” meet the Russian frosts, which broke out in November 1941, and by December reached -30 degrees and below? Let's start with the most important thing - shoes. Such a "barbaric" look of her as felt boots, the European "civilizers" did not recognize. They fought in boots and boots. And for the most part, not even in footcloths, but in socks. Moreover, the sole of German army shoes lined with iron spikes in severe frost gave almost guaranteed frostbite of the foot and toes. Hence the wild-looking "ersatz-felt boots" made of straw and any other rubbish that has turned up under the arm.

The headdress of the German infantryman was a cap. No matter how they tried to pull these cloth rags over the invaders' ears turning into ice, there was no sense. By the way, there were German-made caps with earflaps in nature, but they went to the personnel of the SS and the Luftwaffe, whose leaders showed much greater foresight than the "stripemen" from the Wehrmacht. As a result, the usual infantry screwed on whatever was horrible.

The overcoat of the “Aryan” conquerors is a separate topic altogether. Not only was it sewn from a rather thin cloth, but it was also shortened, "shot down" by our standards. Subsequently, already in 1942, this main piece of uniform was lengthened by 15-20 centimeters and began to attach cloth hoods and various lining options to it. It is clear that the rest of the uniforms (tunic, trousers, underwear) were also "summer", light, did not save from the cold at all. It is not surprising that our quilted jackets and, in particular, sheepskin coats were the most popular trophy among the frozen Germans in winter. It got to the point that they took off the killed Red Army men and overcoats - they were better, more practical and warmer.

Generally speaking, looting in all its forms (primarily among the civilian population) was the main way for the Wehrmacht soldiers to replenish their own winter "wardrobe" in 1941-1942. Yes, in Germany, an extensive campaign was announced to collect winter things to send them to the Eastern Front, but not everyone was enough. And what kind of warm clothes do the Germans have ?! In fact, the rear servicemen of the Third Reich had to develop winter uniforms from scratch. At the very least, the process of creating a Wintertarnanzug (winter two-sided kit) for the Wehrmacht infantry, which included a warm jacket, trousers, comforter and mittens, was completed only by April 1942, and it began to enter the troops not earlier than October of the same year.

Tellingly, this new uniform did not get into the group that fought for Stalingrad at all! About 80 cars with him remained in the rear. Why this happened is completely incomprehensible, because back in December 1941, the same Guderian personally reported to Hitler that in some units of the Wehrmacht, losses from frostbite were twice as great as the damage received from Russian bullets! Until 1943, the German infantry did not have normal winter equipment as such. And yet, let's not forget that it was not “General Frost” who defeated the Nazis - it was our heroic grandfathers and great-grandfathers who defeated!

Ctrl Enter
Noticed oshЫbku Highlight text and press. Ctrl + Enter
We are
Chernobyl notebook. Part of 3Myths of the Great Patriotic. Papier mache helmet
66 comments
Information
Dear reader, to leave comments on the publication, you must to register.