Stalin and tanks. In search of an adequate answer 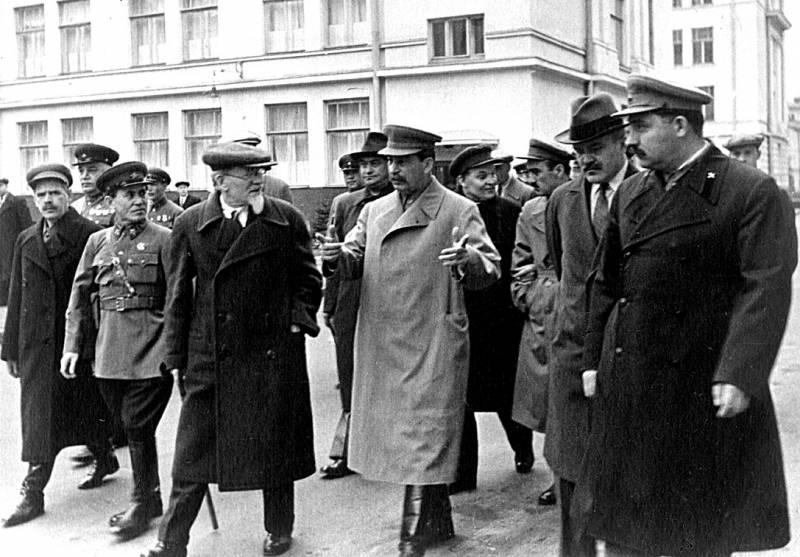 Soviet Union before the start of the famous "tank race "of the 1930s was a power that could not produce modern tanks, and did not know how to use it on the battlefield. There was no experience, no design groundwork, no well-formed engineering school. It so happened that the Russian army during the First World War failed to create tanks and, accordingly, did not receive experience in their use, did not work out tactics, and did not form tank troops. In the 20s and 30s of the last century, Soviet engineers came to build armored vehicles virtually from scratch. It is worth remembering that the UK and France had no problems with tank building and tank use. The British and French became the creators of a new kind of troops, gained vast experience in their use, developed the theory and tactics of their use, forged tank personnel, and accumulated a considerable fleet of armored vehicles. Germany also managed to gain some experience in tank operations at the very end of World War I, as well as create modest tank units. It was in such a situation that Soviet Russia had to prove its right to life by creating powerful tank troops. And this should be taken into account by numerous critics of the development models of Soviet tank building. 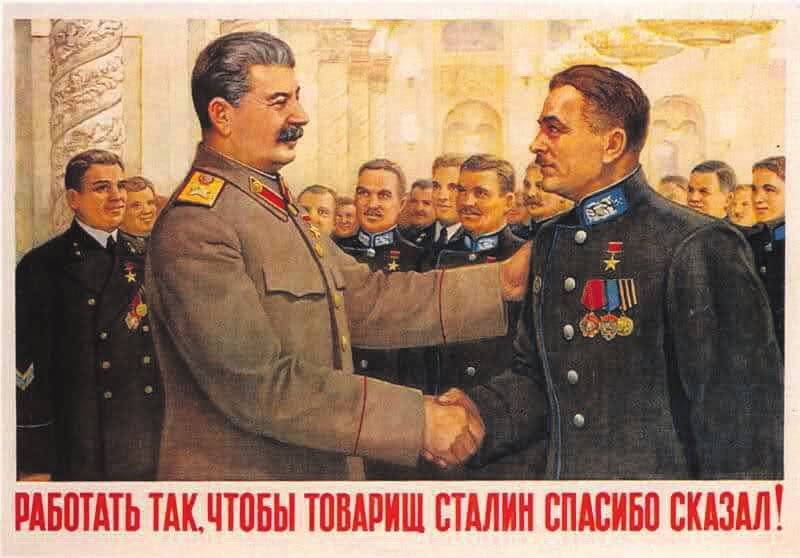 Source: trv-science.ru
Joseph Stalin first drew attention to domestic tank building at the very end of the 20s, perfectly understanding the threats of impending wars and the rapid development of the armies of European states. In the ground forces, it was the armored formations that were to become prevalent due to the combination of speed, firepower and armor protection. The idea of ​​a "tank dash", during which thousands of new armored vehicles were to appear in the Red Army, belongs to the country's top leadership, namely Stalin. On July 15, 1929, a decree "On the state of defense of the USSR" appeared, which clearly stated: in terms of the number of armies not to be inferior to a potential enemy, and in terms of saturation with equipment - two to three times superior. Stalin's priority was tanks, artillery and combat aviation... Actually, it was these areas that became the main lines for the Soviet Army for many decades after. For tanks, the leader's appetites were exorbitant: initially, by the end of the first five-year plan, it was planned to send 1,5 combat tanks to the troops and have about 2 more in reserve. The plan provided for an increase in the production of small arms weapons 2,5-3 times, cars - 4-5 times, tanks - 15 times! A similar growth rate of tank armaments became the basis of the so-called tankization of the Red Army. Over time, the movement unfolding in the country to revise the plans of the first five-year plan in the direction of increasing fully affected the military. On October 13, 1929, the executive meeting of the Labor and Defense Council (RZ STO) proposed

to take all measures for the maximum expansion of tank building in 1930/31 in order to fulfill the task received for the five-year period, if possible, in most of it during the first half of this five-year period.
In November 1929, the Presidium of the Supreme Council of the National Economy (VSNKh) set the industry the task of producing 1934 tanks and tankettes by the end of 5611. A. A. Kilichenkov from the Russian State University for the Humanities believes that this enthusiasm for the technical side of equipping the army has a fairly simple explanation. In his opinion, Stalin and his entourage perfectly understood the impossibility of maintaining a multimillion army in peacetime - the economy of the USSR could not withstand such stress. Therefore, it was quite logical to qualitatively strengthen the army with technical innovations, which, of course, included tanks. However, in stories the main thing - technical competence - was badly lacking. If the issue with production capacity could somehow be resolved, then there were no skills in designing armored vehicles. I had to go to the West for help.

According to other people's patterns

Stalin attached the utmost importance to borrowing foreign military equipment for the needs of the Red Army. The well-known commission for the procurement of foreign equipment under the leadership of Khalepsky from the beginning of 1930 managed to purchase some samples of tanks from Germany, the USA, France and the UK. Many models cannot be called modern, but for the USSR of that time they were like breaths of fresh air. It is interesting to trace Stalin's correspondence with his specialists involved in the procurement of foreign equipment. A. A. Kilichenkov mentioned in one of the materials writes that in January 1930, the deputy chairman of the Supreme Economic Council of the Soviet Union, comrade Osinsky, suggested that Stalin borrow the German tractor "Linke-Hoffmann". This vehicle combined the advantages of an armored vehicle and a 37-mm cannon, which was quite heavy for its time, allowing it to destroy enemy tanks. It would seem that this is an excellent tank destroyer capable of becoming the ancestor of a whole class of domestic armored vehicles. But this example did not impress Stalin, and the USSR was deprived of mobile anti-tank weapons for many years, which was negatively reflected in further military history. The country's leadership viewed the tanks mainly as artillery pieces, clad in armor-plated armor and mounted on a track.

Conceptually, Stalin considered the structure of the tank forces in the format of an alternative response to the Western aggressor. What does it mean? Particular emphasis was placed on unusual, even experimental designs that could surpass enemy tanks by an order of magnitude. The idea is very similar to the notorious "wunderwaffe" that appeared a decade later. In particular, the amphibious tanks, born to the British in 1931, aroused particular interest, if not delight, in Stalin. Now the entrenched enemy can receive a dagger tank strike, from where he was not expected - for example, from the side of a water barrier. In addition, the hordes of amphibious tanks were much more mobile than ground tracked vehicles. There was no need to look for bridges or wait for a crossing to be established. They preferred not to know or not to notice that anti-tank weapons were being developed in Europe, capable of penetrating through such armored boxes. It is interesting that the developers of the amphibious tank from the Vickers-Armstrong company themselves came up with a proposal to the Soviet side to purchase several copies of armored vehicles. Mikhail Tukhachevsky, a supporter of military innovation, was on the side of Stalin in this matter and spoke with enthusiasm about the English amphibious tanks. After the deputy people's commissar was notified of the intentions of the British, he replied on the same day: 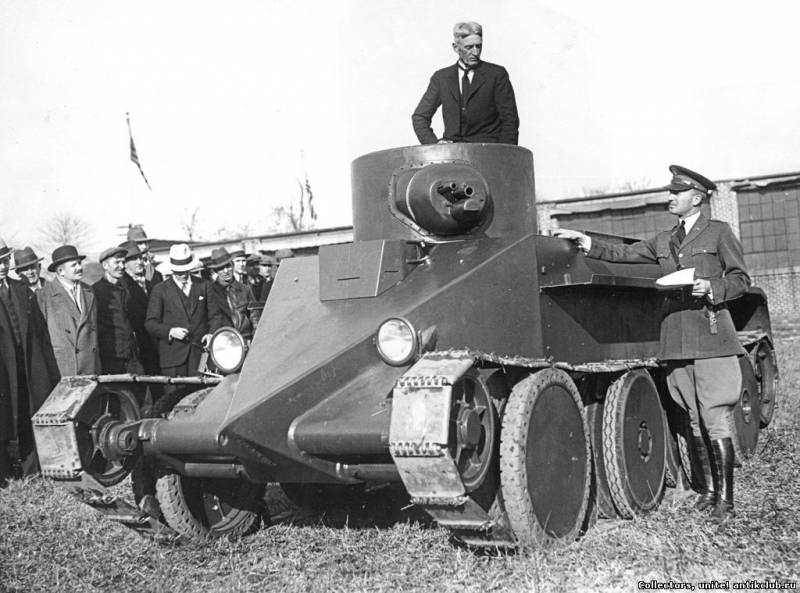 Source: cdn1.img.ukraina.ru
To understand the level of Stalin's attention to armored amphibians, it is worth telling about one episode associated with his reaction to the appearance of this class of tanks. As soon as Moscow learned about the appearance of Vickers-Carden-Lloyd in Great Britain, Stalin called Khalepsky and rudely reprimanded him for not buying a floating car from Christie in the USA. Khalepsky at that time was with an ulcer in the hospital and was seriously scared, especially since Christie did not present any working prototype to the Soviet commission - there was only a model. This time everything ended well for the head of the Department of Mechanization and Motorization of the Red Army. Innokenty Khalepsky was shot later, in 1938, and for a slightly different reason. Meanwhile, the dead-end branch of amphibious tanks received unprecedented development in Soviet Russia, which resulted in more than a thousand T-37 amphibians built on the basis of the British tank. 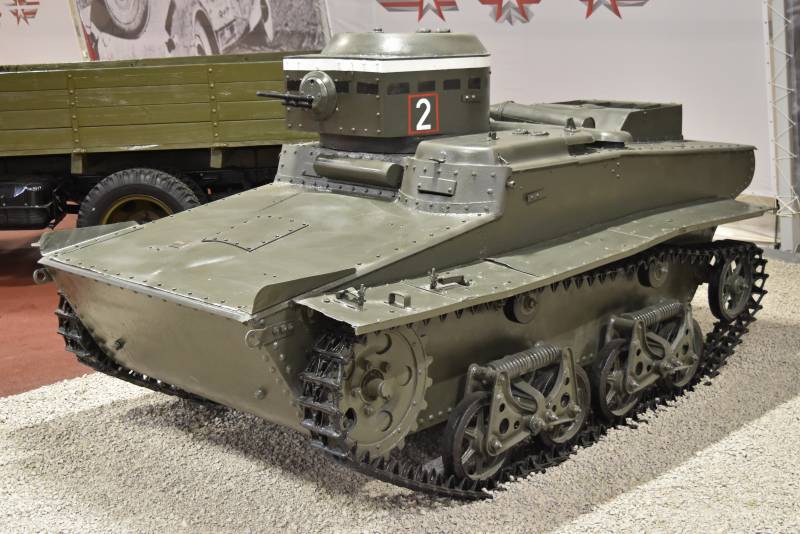 T-37A. Source: wikimedia.org
Among the initiatives of Stalin and his entourage were even less sensible thoughts about the design of tanks. "Vickers" was then offered to create and produce a heavy tank, the parameters of which could be the envy of modern military theorists. For obvious reasons, this project was too difficult for the USSR industry. According to the requirements, the tank, weighing 43 tons, 11 meters long, protected by 40-60 mm armor, was armed with two 76-mm guns and four machine guns. Despite its gigantic dimensions, the breakthrough tank had to "pass a ford up to 2 meters deep ... while maintaining the possibility of firing on the move." At a depth of up to 5 meters, the tank was supposed to be able to move along the bottom at a speed of up to 15 km / h, using tracks and reversible propellers. Underwater movement was provided by observation and lighting devices. In addition, a desire was additionally expressed to ensure the possibility of "self-propelled movement on rails, both 1524-mm track of the USSR and 1435-mm international". Transitions from the railway track to the tracks and back were to be made from inside the tank in five minutes. No less stringent requirements were imposed on the noiselessness of this whopper. At a distance of 250 meters, "in calm weather, it was impossible to determine the presence of a tank moving along the highway with the naked ear." For comparison: the "silence distance" of a small tank was, respectively, 300 m. The most amazing thing is that "Vickers" undertook to implement such fantastic requirements, with the exception of some very exotic ones. But in the end, the negotiations, which lasted from May 1930 to July 1931, ended in nothing.

Ctrl Enter
Noticed a mistake Highlight text and press. Ctrl + Enter
We are
Is the "old" well forgotten to become the "new"? Part-2. At the call of honor and dutyIron fist of the Red Army. Motorized and tank divisions
253 comments
Information
Dear reader, to leave comments on the publication, you must to register.