How Ivan the Terrible created the first Russian ground forces 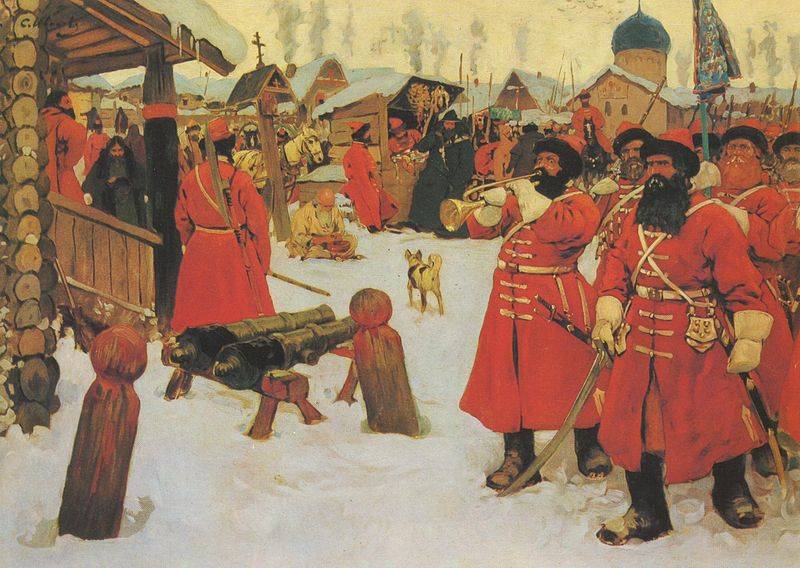 470 years ago, on October 1, 1550, Tsar Ivan the Terrible laid the foundations for the Russian regular army. On this day, the Russian sovereign issued a Sentence (Decree) "On the placement in Moscow and surrounding districts of a selected thousand of service people." In the same year, a streltsy army was formed.

As a result, Ivan the Terrible, in fact, laid the foundations of the first permanent army. In honor of this historical event, on October 1, modern Russia celebrates a professional holiday - the Day of Ground Forces.

Ivan IV Vasilyevich actively carried out military reforms, a streltsy army was created, a permanent guard service, artillery ("outfit") was allocated to an independent branch of the army. Also, the system of manning and military service in the local army was streamlined, centralized control of the army and its supply was organized, artillery, mine work and manual firearms were actively developed. weapon.

The heyday of the Russian state

At the end of the XV-XVI centuries. the economic base of Rus was strengthened, during the reign of Ivan Vasilyevich (1533-1584) the creation of a centralized state was completed. The already existing cities were quickly built and grew. Russia was a country of cities in which up to 20% of the population lived. The development of the craft led to the qualitative and quantitative growth of the production of weapons, especially firearms. The service nobility became a solid military and political foundation of the Russian autocracy. Also, the support of the king was the church and the townspeople, interested in strengthening the state, which was personified by the sovereign.

Ivan IV in 1547 took the title of tsar, became an unlimited autocratic ruler. Under him, the remnants of feudal fragmentation were eliminated. To suppress the resistance of the supporters of feudal fragmentation (princes and boyars), the oprichnina institute was created - a special military-economic organization. Landless nobles were selected for the guardsmen. In 1565, “1000 heads” of nobles were selected, who broke all ties with the Zemshchina (owners and estates that were not included in the oprichnina). The lands of the oprichnina belonged to the sovereign and his people personally. The most developed trade and economic centers and lands, which previously belonged to the aristocracy, departed there. Soon, up to half of the state's territory was included in the oprichnina. As a result, the tsar suppressed the political opposition (including economically), eliminated the remnants of appanage squads and created a military support for himself in the person of service people who were completely dependent on the sovereign's mercy. Also Ivan the Terrible supplemented the “vertical” of power with a “horizontal” - a system of zemstvo self-government. Its peak was the Zemsky Sobor, where delegates from different cities and estates decided the most important issues. This policy met with the support of most of the population of the state. This gave Russia great stability and allowed her to survive in the years of the future Troubles.

This could not but affect the military and political successes of the Russian state. Russia expanded significantly to the south and east, including the entire Volga region, the Urals and Western Siberia. At the same time, movement to the south and east continued. The defense of the southern and eastern borders was significantly strengthened, where fortified lines (zaseki) and Cossack troops began to play the main line. The Russian state was able to reflect the next "crusade" of the West - the Commonwealth, Sweden with the support of Rome and the German Empire.

Sovereign Ivan the Terrible actively improved the armed forces of the Russian state. The local system that emerged in the 1550th century was finally formalized by the decrees of Ivan IV. In 1071, 1555 people of the "boyar children", the "best" servants, were "housed" in the area of ​​the capital. The "Chosen Thousand" of Moscow nobles became the basis for the commanding personnel of the army and the highest rank of the service class. In 150, the Code of Service was published, equalizing estates and estates, military service for the highest nobility (princes and boyars) and nobles became mandatory and hereditary. The code determined official duties depending on the size of the estate. For the service was given a land plot ranging from 3 to 4 thousand hectares. Also, the service was entitled to a monetary salary depending on the category (from 1500 rubles to 100 rubles). For every 50 couples (about 15 hectares) of good land, the nobles had to equip one equestrian warrior, ready for a long campaign. Those who fielded more soldiers were awarded, the deviators were punished. The estate (and service) passed from father to son. The service began at about XNUMX years old. For the registration and verification of the nobility, reviews were held, where the service lists ("tithes") were specified.

According to Western authors, Muscovy ("Tartaria") could exhibit from 80 to 150 thousand horsemen. However, these are clearly overstated figures. Russian military historians cite a figure of about 20 thousand boyars and nobles, who were listed in the category lists. For example, in the rich and large Novgorod land there were more than 2 thousand noblemen, in Pereyaslavl-Zalessky a little more than a hundred, in Kolomna - 283, etc. That is, the local cavalry could number 30 - 35 thousand fighters. But at the same time, part of them remained in reserve, covering other areas, that is, not all went on the campaign. It is clear that the army had a large number of service and support personnel (non-combatants), so the Russian army seemed huge to foreigners. The tsarist regiment, which, according to sources, numbered 15-20 thousand people (this figure is clearly greatly overestimated), was considered the select part of the local cavalry.

Also part of the local army was the Tatar cavalry (about 10 thousand horsemen), warriors of the Tatar (former Horde) nobility, which became part of the all-Russian elite. Part of the cavalry troops were "city" Cossacks, Don, Dnieper, Volga, Yaik (Ural), Terek, Cherkassk and Siberian Cossacks. Most often, the Cossacks carried the border service. The Cossack troops were powerful offensive and defensive bridgeheads of the Russian land, advanced to the most dangerous directions. If necessary, in the peasants' and posadskie yards, they recruited equestrian people for donations.

The second part of the Russian army was the infantry. At the beginning of the 11th century, a new type of infantry appeared - squeakers. They were armed with firearms (pishchal). The caliber of hand-held arms ranged from 15 to 3 mm on average. There were also squeaky tools. Squealers were exhibited by Moscow, Novgorod, Pskov and other cities. So Novgorodians equipped one squeaker from 5-XNUMX yards.

In 1550, a detachment of 3 thousand "elected archers from archers" was formed, consisting of six "articles", 500 soldiers in each "article". Each "article" was divided into hundreds. Their heads (commanders) were nobles. The rifle army was kept not only during the war, but also in peacetime. The archers were equally armed and uniform. This was the beginning of a standing (regular army). In the annals, the archers are mentioned earlier in 1550, but this type of troops was finally formed at that time. Streltsy were recruited from free people, received a salary for service, plots of land in the city area, had the right to engage in trade and craft activities in their free time. For this they carried out lifelong service, which could be inherited. They lived in their own special settlements. In peacetime, they carried out a guard service. Of the best archers, a special equestrian detachment (stirrups) was created. The warriors were armed with a pishchal, a berdysh (a long-tree battle ax with a very wide blade) and a saber. The berdysh was used not only as a cold weapon, but also a stand for the squeak (it was impossible to shoot from the squeak without a stand because of its large weight).

According to foreigners, there were 10-12 thousand archers in the Moscow kingdom, including 2 thousand stirrups, 5 Moscow and 5 thousand policemen (in other cities. In the last quarter of the XNUMXth century, the garrisons of the north-western cities of Russia consisted mainly of archers, gunners, Cossacks, collars (guarding gates and towers with cannons), etc. Streltsy became one of the main branches of the army.

The third most important part of the Russian army was artillery ("outfit"). The fortresses and arsenals were armed with hundreds of guns. They had qualified personnel for their production and service. These were gunners - Moscow and policemen. Their position was similar to the archers. Received a salary: under Ivan Vasilievich 2 rubles. with a hryvnia a year in money and half an eight of flour a month; the Moscow gunners, in addition, also received a year of cloth for good, 2 rubles each. cloth. They received plots of land in cities, conducted economic activities, lived in their own settlements, sued in a special Pushkar order. Free people entered the gunners. The service passed from father to son. Obviously, the gunners had some training. The "outfit" also included collars, blacksmiths and carpenters.

The construction of fortresses and siege work in Russia was supervised by the "rozmysy" (engineers). They became the beginnings of the engineering troops. Also in the Russian army were detachments of professional mercenaries - this was the tradition of Western Europe. There were few of them (several hundred) and they did not have a significant impact on the development of the Russian army.

In the same period, a higher military administration was formed: Local, Razryadny, Streletsky and Pushkarsky orders. The army was well organized, consisted of 3-7 regiments. The shelves were divided into hundreds, hundreds into tens. Sagittarius in peacetime consisted of orders (500 people), they were divided into hundreds, fifty and tens. The battalion (army) was commanded by a large voivode, regiments - by regimental voivods, there were also chiefs of intelligence, artillery and gulyai-gorod (mobile field fortification). Under Ivan the Terrible, Russia actively revived ancient defensive lines and built new traits (notches). They were defended by a notch guard, which had its own reconnaissance guard. This is how the border service was born.

Thus, under Ivan Vasilievich in Russia, the foundations of a regular Russian army were created. This allowed the Russian kingdom to successfully defeat the wreckage of the Horde on the Volga - Kazan and Astrakhan, annex the Volga trade route, the Urals and Siberia. At the first stage of the Livonian War, crush Livonia to smithereens, and then withstand the combined might of the then "world community". In the south, oppose the Crimean Khanate and the Ottoman Empire. 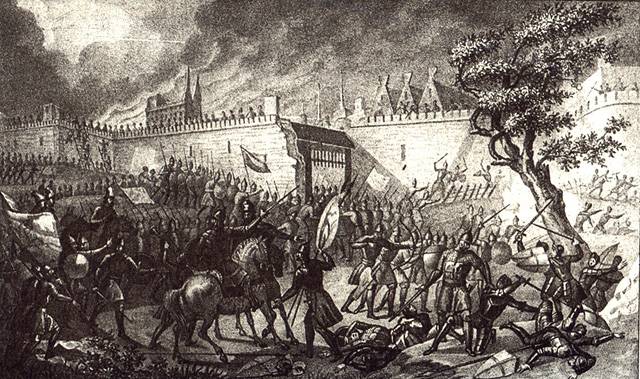 Ctrl Enter
Noticed oshЫbku Highlight text and press. Ctrl + Enter
We are
Streletskaya guard of the KremlinThe birth of the regular Russian troops
48 comments
Information
Dear reader, to leave comments on the publication, you must to register.