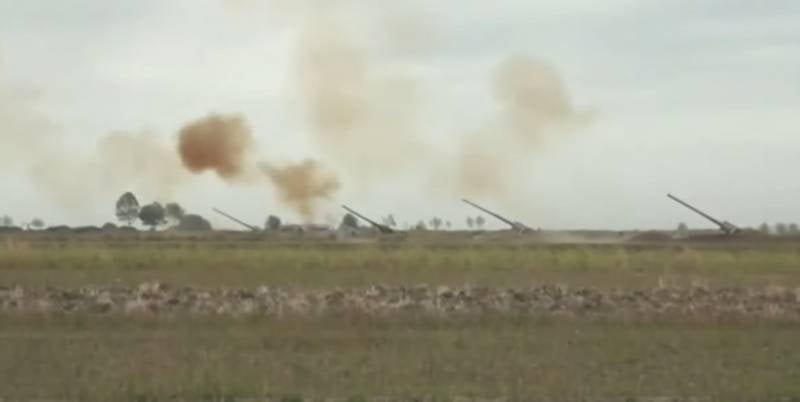 Wars never end in peace. Wars end in victory or defeat. Whatever politicians tell us is an axiom. Everything else that diplomats and leaders agree on after the victory is just derivatives of the actions of the military. The winners dictate their terms of the new world order, the losers agree to the terms of the winners.


Azerbaijan and Armenia are at war today. This is no longer a conflict, this is a real war using all available forces and means. Moreover, the use of heavy weapons indicates that this is a war to destroy the enemy's military potential for a rather serious period. The same can be drawn from the mobilization of human resources in both countries.

Why the war did not come as a surprise

Today, too many people pretend that they did not know about the impending war, that war is something unexpected, which no one wanted. Both Armenians and Azerbaijanis talk about their commitment to peace, about some kind of negotiations, about pity for the victims. Oh, how badly our opponents did! So they suddenly attacked and killed innocent old people and children ...

Someone did not know that the Armenians do not fulfill the terms of the agreements on the liberation of seven regions of Azerbaijan? Note, not the regions of Karabakh, but the regions of another country. Someone did not know about the positions of the parties in the negotiations? About "either our way, or nothing"? Let's not fool ourselves. Over the past two years, Armenia's position has become especially uncompromising. Thanks to the world's second largest embassy of one overseas power.

You watch such speeches and marvel at the ability to mimic some politicians. Indeed, only a few days have passed since the speeches of the leaders of hostile states at the 75th UN session. And so far what Aliyev and Pashinyan spoke about is not forgotten.

Nobody prepared for war? Did everyone expect the negotiations to continue? But what about the video footage of strikes on the enemy? After all, both sides published victorious reports on the success of their units. For a more or less militarily literate person, after watching these strikes, it becomes quite clear that both sides perfectly prepared their positions and created a decent military infrastructure.

Moreover, judging by the video from the battlefield, the contact line is well equipped in engineering terms. Many people can tell the difference between hitting an armored vehicle or detonating AT mines. The active use of UAVs and means of countering unmanned aerial vehicles speaks of knowledge not only of the forces and means of the enemy, but also of the readiness to repel attacks by these means.

Will they fight until complete victory?

I am often asked a simple question from the point of view of a layman: how long can the war between Armenia and Azerbaijan last?

It is both possible and impossible to answer this simple question. It is possible because the states are small enough and have limited resources. It is impossible because everything will depend on many factors, such as the intensity of hostilities, the morale of the army, the possibility of increasing the supply of ammunition and other resources to the troops, etc.

Based on the capabilities of the sides, it must be said that the Armenian army will be able to conduct military operations for a maximum of two weeks. At least, judging by the data from open sources. The Azerbaijani army is in much more favorable conditions in this respect. Especially if you take into account Turkey's statements of assistance and the possibility of supplies with practically no restrictions.

Both sides have an understanding of this fact. Consequently, the tactics of warfare will be different. The Armenian side will do everything to win in a short time or, if there is no military victory, to transfer the war to the next round of negotiations. After the liberation of the territories occupied by Armenia, which today constitute the "security belt of the NKR", Baku will wage a war to completely exhaust the enemy.

As you can see, in both cases we are not talking about Karabakh itself. Despite all the talk about love for the people of Karabakh, the Armenians did not legally make a single step to include the region in their composition. Azerbaijanis, realizing that after the ethnic cleansing of Karabakh, there are almost no chances for the region to join their country, they are also not particularly eager to take the republic under their control. Although they prove in every possible way the fact that legally this region belongs to Azerbaijan.

The war, which today takes the lives of Armenian and Azerbaijani soldiers, civilians, children, old people, is not needed by anyone. The Armenian and Azerbaijani peoples do not want war. Many people say that politicians need war. It seems to me that Baku and Yerevan are also against the war. It is the leadership of the countries. At least, the speeches of Aliyev and Pashinyan on Russian television in the 60 Minutes program had just such a subtext.

On the other hand, both states prepared war, more precisely, warriors. Many of us living in Russian cities have already seen the lessons of hatred in action. We saw it on the Internet. Personally, I have repeatedly encountered the corresponding manifestations in the comments to my materials.

Hooray-patriotism, nationalism, hatred in Armenia and Azerbaijan, I think, have become the norm. To this should be added the attempts of religious propaganda in both countries. Now you watch footage from broadcasts from Baku and Yerevan and you understand that this is far from a game. Crowds of volunteers at military registration and enlistment offices, women at blood donation centers, general excitement and thirst for victory. And now to this will be added tears for the dead, a funeral ...

About the purposes of the war

Have you thought about the many materials about the participation of the Turkish army in the war on the side of Azerbaijan? Messages go in a continuous stream. Syrian militants hired by the Turks, Turkish special forces, the F-16 of the Turkish Air Force, which shot down the Armenian Su-25 ... And this at a time when the intelligence capabilities of the world's leading armies make it possible to receive intelligence in real time.

Moreover, the constant statements of the Turkish president about support for Baku in the liberation of the occupied territories. Erdogan is one of the world leaders who, like Vladimir Putin, does not throw words to the wind. This has to be admitted. And if you add to this his eastern intemperance and desire to be the first in everything, it turns out that it is quite simple to make him act rudely.

Russia is now at a crossroads. Between military-political cooperation with Armenia and economic cooperation with Azerbaijan. If we support one side, we will lose the other. Let's get involved in the war - we will receive a Turkish response.

What decision the Russian president will make, I do not know. The ideal would be to force both sides to stop fighting and implement the previous decision of the contact group on Karabakh. Nagorno-Karabakh has existed for many centuries. People have lived there for many centuries. Does it really matter who it belongs to legally? For many decades, Armenians and Azerbaijanis lived in peace and harmony under the Soviet Union. What has suddenly changed now?

Ctrl Enter
Noticed oshЫbku Highlight text and press. Ctrl + Enter
We are
A great interview with Sergey Lavrov: about Ukraine, Obama and IranWhat you didn't want to know about England
109 comments
Information
Dear reader, to leave comments on the publication, you must to register.