Disrupted attacks and penetrated defenses: the third day of fighting in Karabakh in the video of the parties to the conflict 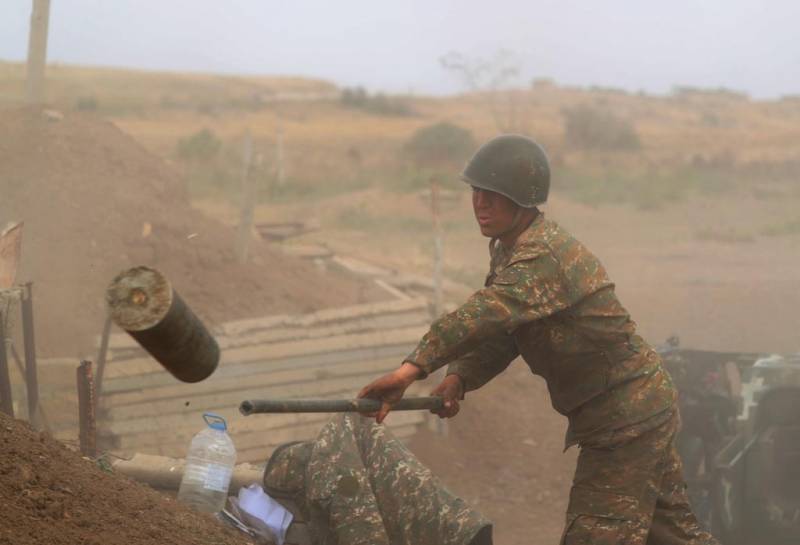 Active hostilities continue on the Karabakh front. Both sides of the conflict faced powerful opposition, hampering both the development of the offensive by the Azerbaijani troops and the organization of defense by the Armenian military.


The Armenian side declares strikes against enemy bases and armored vehicles and disrupted enemy attacks. The second video demonstrates the "destruction of the entire unit" of the armored forces of Azerbaijan, which occupied one of the settlements.


According to the Armenian side, successful work is being carried out on the enemy's rear, which makes it possible to "chop off" the supply chains of his troops. In particular, showing frames destruction of a convoy with ammunition.


Judging by the footage, the offensive of the Azerbaijani troops is facing strong opposition from the enemy. One of the videos shows a foiled infantry attack. As stated, when trying to take one of the positions "the enemy fled with losses."

Several materials indicate the successful implementation of a number of attacks. One of the videos depicts Armenian soldiers entrenched in a trench and being fired upon. Since the shooting was at the disposal of the Azerbaijani resource, they, most likely, did not survive. According to representatives of the Azerbaijani side, the enemy's defenses were broken through in several sectors of the front.

The battles are fought around the clock, not abating at night. Intensive support for the offensive is provided by artillery: self-propelled and towed guns, MLRS.

Some observers were confused mortar use by the Armenian military, since with such an operation, the rate of fire is significantly reduced.

The Azerbaijani military is actively using "kamikaze" drones. One of them was directed at the Armenian soldiers, who tried to hide in the dugout during his approach. Part of the UAV can be intercepted: by air defense was destroyed loitering ammunition "Orbiter-1K". The equipment and the order of its placement on board the vehicle indicate that the fire was fired from the Osa-AKM air defense system.

As stated, it bears losses and aviation both sides. Armenian resources show footage of the defeat of the Azerbaijani aircraft. There is no clarity in the situation with the downed Armenian attack aircraft Su-25. Turkey and Azerbaijan categorically deny the involvement of F-16 fighters in this.

MANPADS are actively used, successful shooting at the drone is shown.


However, in general, the Armenian air defense, apparently, copes with the tasks assigned to it. So, in one of the videos, soldiers are forced to fire at an air target from a small weapons.

A spontaneous mobilization unfolded among the Armenians. The footage of traffic jams on the way to Artsakh is shown. Apparently, the country's government is trying to give impetus to this movement. Thus, it is argued that the sons of Armenian ministers go to the front as volunteers. The Georgian authorities closed the border with Armenia, in connection with which the local Armenians blocked the roads leading from Turkey.

The Armenian leadership is trying to enlist foreign policy support. Regular telephone conversations were held with the head of the Russian Federation Vladimir Putin. Apparently, Iran took a pro-Armenian position. Turkish media announces the transfer of arms to Yerevan. On frames demonstrates the transfer of troops by Tehran to the border with Azerbaijan, which are capable of pulling off part of the forces necessary for the development of an offensive in Karabakh.

Ctrl Enter
Noticed oshЫbku Highlight text and press. Ctrl + Enter
We are
Azerbaijani Defense Ministry announces preemptive strikes on the Armenian army in KarabakhReports from the militia of New Russia for 2 September 2014 of the year
191 comment
Information
Dear reader, to leave comments on the publication, you must to register.