The defeat of the Red Army on the Shara 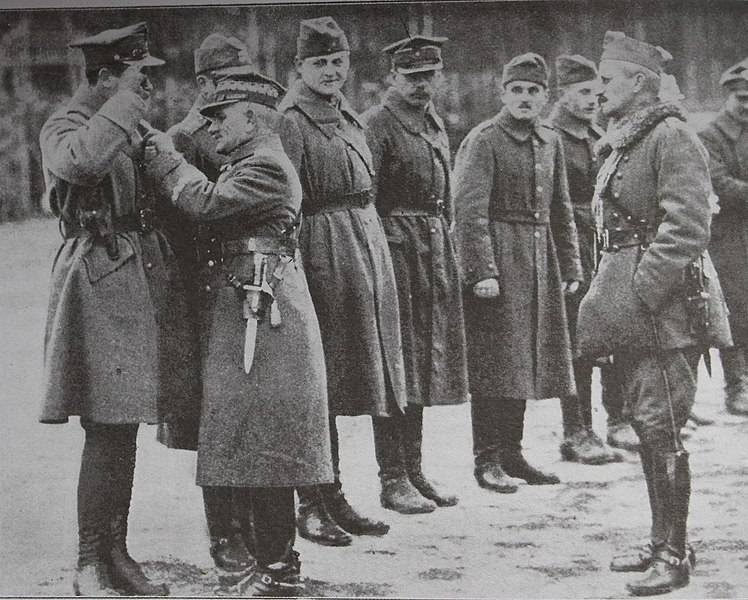 General Leonard Skersky awards the officers of the 10th Reconnaissance Squadron with the Order. 1920 g.

100 years ago, Pilsudski defeated Tukhachevsky's troops on the Shchara River. Polish troops completed the defeat of the Western Front of the Red Army, which led to the defeat of Soviet Russia in the war with Poland.

Development of the offensive of the Polish army. Slonim and Baranovichi

After the start of the retreat of the Red Army, the Polish high command developed a new offensive plan. Now the Poles were going to surround the main forces of the Soviet Western Front in the Baranovichi area. The 2nd Polish Army was to advance from the Lida - Mosty line, and the left wing of the 4th Army was to advance along the Brest - Slutsk highway south of Baranovichi. The situation was favorable for the Polish troops. Soviet troops were disorganized and moved more slowly than the enemy.

The 4th Army of General Skersky, after the capture of Volkovysk, moved to Slonim and Baranovichi. On September 26-27, 1920, the left wing of the 4th Army reached the Shchara River. General Konazhevsky's 14th Infantry Division was advancing on Slonim. The Polish division advanced in two groups: from the west (stronger) and from the south. They were opposed by the 17th and 48th Infantry Divisions of the 16th Army of A. Cook. The southern group on the night of September 27-28 captured the bridge, crossed the Shara and seized the bridgehead. Part of the forces bypassed the city from the east, suddenly attacked the enemy and intercepted the Slonim-Baranovichi road. On the 28th, the Western group captured Slonim.

Pursuing the retreating enemy, Polish troops reached Baranovichi on the morning of September 30. Despite the long march, the 14th division attacked the city on the move. Soon the Poles took Baranovichi, captured about 200 people, captured significant reserves of the Red Army. Polish soldiers took up old German positions east of the city, where they fortified and rebuilt. On October 1, the Reds tried to counterattack, but were driven back and suffered heavy losses. 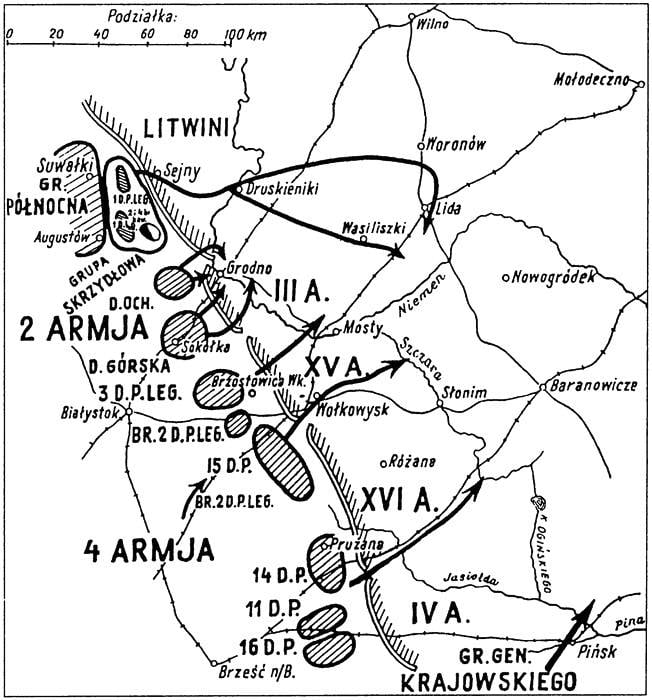 Battle of the Neman and Shchara (Polish map)

Meanwhile, the southern wing of the 4th Polish army was fighting for Kobrin. Polish troops in Polesie operated separately from the main forces. They interacted with the task force of General Krayevsky (18th Division), which was advancing from the south, from the Ukrainian part of Polesie. Here the Poles were opposed by the newly formed 4th Soviet Army under the command of D. Shuvaev. The army had two rifle divisions and a cavalry brigade. Two more divisions were formed in its rear. Before the start of the retreat, the command of the Western Front assigned the 4th Army the task of recapturing Brest. However, the Poles preempted the enemy and launched the offensive first.

The troops of General Skersky on September 11 went to Kobrin. The city was attacked from the west and south by the regiments of the 14th (one regiment) and 11th divisions. On the night of September 11-12, having broken through the defenses of the 57th Infantry Division, the Polish troops captured Kobrin. To strengthen the defenses of the occupied city, the Poles urgently transferred the 16th Infantry Division to the area. The Poles took up positions on the Mukhavets River. The Soviet command tried to recapture Kobrin with the forces of three divisions - the 55th, 57th and 19th. On the night of September 15-16, Soviet sappers set up a crossing at Mukhavets. The 19th division, supported by artillery, attacked the regiment of the 14th Polish division, but the enemy withstood the onslaught. In the sector of the 16th Polish division, the Reds pushed the enemy back. But on the 17th, reinforcements arrived, and the Poles again went forward. They returned to their previous positions. Both sides suffered heavy losses in these battles. To distract the Red Army from the Kobrin direction, Skersky decided to attack Pruzhany. General Milevsky's group took Pruzhany on the night of September 18-19. But the fighting in the area of ​​the city continued until September 22. The Polish army held Pruzhany and captured up to 2 thousand people.

Thus, the Polish war took Kobrin and Pruzhany, in stubborn battles they defeated the newly formed 4th Soviet army. Soviet troops went over to the defensive along the Pruzhany - Gorodets line. On September 21, Polish troops (16th division) attacked Gorodets, but the Red Army repulsed the first assault. During the second attack, Polish soldiers were able to push the Reds behind the Dnieper-Bug canal. On September 22, the Poles conducted artillery training. On September 23, they went on the attack again, by the evening of the 24th the Polish troops broke the resistance of the 57th Soviet division and captured Gorodets. Thus, the Polish 4th Army created a threat of an exit from the north to the rear of the 12th Soviet Army in Volyn. Polish troops in Polesie (16th and 18th divisions) continued their offensive in Polesie, captured Ivanovo, Chomsk and Drogichin. On the 28th, the Poles reached the Yaselda River, the left tributary of the Pripyat.

In addition, on September 26, 1920, a partisan detachment of Bulak-Balakhovich (about 2600 bayonets and sabers), consisting of White Guards, with a sudden blow captured Pinsk, where the headquarters of the 4th Soviet army was located. The commander and chief of staff managed to escape. The enemy managed to capture almost the entire garrison of the city (about 2,4 thousand people), capture two armored trains, dozens of machine guns, and army supplies. As a result, the troops of the 4th Army temporarily lost contact with the command and combat effectiveness. In October, the White Russian People's Volunteer Army began to form in Pinsk. The new white army received the status of a "special allied army" from the Polish command. 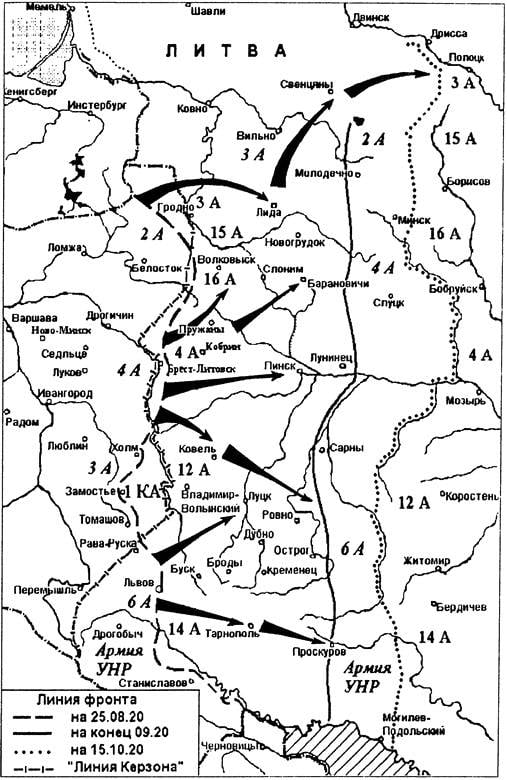 The offensive of the Polish troops in September-October 1920. Map source: A. Gritskevich. Western Front of the RSFSR, 1918-1920. Fight between Russia and Poland for Belarus

After the capture of Lida and Slonim, the Polish commander-in-chief Piłsudski on the night of September 28-29, 1920 ordered the 2nd and 4th armies to continue their offensive to the east. The Polish marshal set the task of encircling the enemy troops in the Novogrudok-Baranovichi area. The 2nd Army of Rydz-Smigly developed an offensive on Novogrudok and Molodechno, reaching the Western Dvina, the 4th Army of Skersky in the Minsk direction. The Polish leadership attached great importance to this operation, since peace negotiations were already underway in Riga. Pilsudski wanted to get better conditions for negotiations, that is, inflict a decisive defeat on the Red Army and occupy as many territories of Belarus and Ukraine as possible. In turn, the command of the Soviet Western and Southwestern Fronts was ordered to surrender to the enemy as little land as possible, but at the same time retain the troops.

By the beginning of October 1920, the Polish army had advanced 100–150 km in a week. On the evening of September 28, the command of the Western Front ordered the troops to withdraw to the line of the old Russian-German front Western Dvina - Braslav - Postavy - Myadel - Smorgon - Korelichi - Lyakhovichi and further south. It was planned to stop the enemy there. Tukhachevsky in Smolensk was optimistic. In fact, many divisions have completely or partially lost their combat effectiveness. The reinforcements had no combat experience. As a result, the troops were not ready for serious battles. In addition, the Polish troops had the best grouping, and the Soviet 3rd and 4th armies had largely lost their combat effectiveness. As a result, the Red Army was unable to stay on the line of the old German front.

On October 3, Tukhachevsky proposed to the main command to allow the army of the Western Front to withdraw to the lake line. Naroch - Smorgon - Molodechno - Krasnoe - Izyaslav - Samokhvalovichi - Romanove - r. Occasion In response, the main command announced on October 5 that this could complicate negotiations in Riga. Commander-in-Chief Kamenev gave instructions to preserve as many territories as possible, especially Minsk. The command of the Western Front tried to organize a counteroffensive and push the enemy back. The 27th division (front reserve) was deployed to defend Minsk. The 3rd and 16th armies were to go on the offensive, reach Lake Naroch and Smorgon, and advance in the south.

However, in early October, the Polish armies stepped up the onslaught. The Polish high command also wanted to achieve better positions before the conclusion of peace. Polish troops on Lithuanian territory again bypassed the positions of the 3rd Soviet Army and forced the Red Army to withdraw to the Western Dvina. Many parts of the Western Front were completely demoralized, did not want to fight and completely surrendered to the threat of encirclement. On October 7, Polish troops captured Ashmyany and Soly, on the 12th - Molodechno, on the 13th - Turov. On October 12, a truce was concluded in Riga, but according to its terms, the Poles could advance for another 6 days. Pilsudski ordered to go further east, pushing the Reds behind the Berezina. On October 15, the Polish army occupied Minsk, but then left it, withdrew to the line of the new border. On October 18, hostilities ceased, the troops were disengaged in accordance with a preliminary agreement.

Thus, the troops of the commander Tukhachevsky lost the battle on the rivers Neman and Shchara. The Red Army suffered heavy human and material losses, retreated from the territories of Western Belarus and Ukraine. Moscow had to make big concessions to Warsaw during the peace talks.

Battle of Rostov
The disaster of white Odessa
How Slashchev Crimea defended
Dono-Manych battle
The death of the Northern Army Miller
Why Western agent Kolchak is turned into a hero and martyr of Russia
The defeat of the army of Denikin in the battle of Tikhorets
How did the Ice Siberian campaign end
The fall of the White Kuban
Agony of White Novorossiysk
The death of the Kuban army
Denikin's resignation
Far Eastern Republic and the Japanese threat
Polish "liberation" campaign in Kiev
Baku “Blitzkrieg” of the Red Army
The battle for Belarus. May operation of the Red Army
War of the Russian Army Wrangel
The first victories of the Wrangel army
The defeat of the 13th Soviet Army in Northern Tavria
Our Kiev!
The battle for Rivne. How Budyonnovtsy smashed the Polish defense
Minsk is ours! The defeat of the Polish army in Belarus
Battle for Lviv. The failure of the Red Army in Galicia
The death of the cavalry group Rednecks
The fierce battle for the Kakhovsky bridgehead
The defeat of the landing group Ulagaya
"Miracle on the Vistula"
How Tukhachevsky destroyed his armies on the Vistula
Battle of Komarov. Defeat of the 1st Cavalry Army
Bukhara Blitzkrieg Frunze
"The danger of Wrangel is becoming enormous ..."
Battle on the Lower Dnieper
The last offensive of the Russian army
Battle of the Neman
Defeat of Tukhachevsky on the Neman
The defeat of the 3rd Soviet army in Belarus

Ctrl Enter
Noticed oshЫbku Highlight text and press. Ctrl + Enter
We are
My grandfather's front-line letters (part 2)Myths of the Great Patriotic. Papier mache helmet
19 comments
Information
Dear reader, to leave comments on the publication, you must to register.