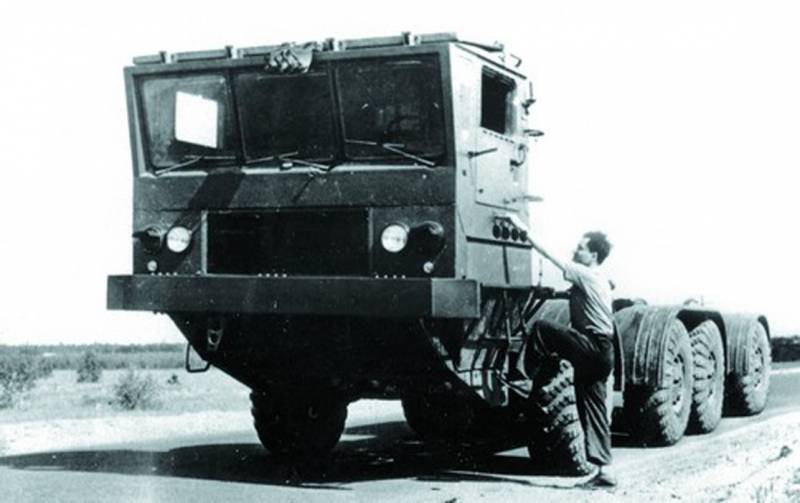 November 7, 1961 became a double holiday for the chief designer of SKB ZIL Vitaly Grachev. His brainchildren passed through the main square of the country in the status of serial cars. These were ZIL-135K, in the appearance of which only a specialist can guess the similarity with the original machines of the 135th series.

В previous parts of the cycle about the military four-axle off-road vehicles of the Special Design Bureau ZIL, it was about the difficulties with the embodiment of Vitaly Grachev's ideas in metal. One of the most significant was the galloping of a multi-axle vehicle due to the lack of wheel suspension. The engineers decided to get rid of an unnecessary, in their opinion, unit, thereby saving weight and reducing the overall height of the structure. And if the platform of the off-road truck is located low, then the load can be placed heavier and higher, without fear of an excessively high center of gravity. But there were also disadvantages to this approach. The experienced ZIL-135E, due to the actual absence of a suspension, already at a speed of 15-20 km / h suffered from resonance vibrations on a dirt road. If the driver had the courage to increase the speed, then by 60 km / h he was overtaken by a second, more powerful wave of vibrations that could throw the car off the road. This problem was partially solved on the ZIL-135K, which can be recognized by the characteristic reverse slope of the windshield and the base elongated relative to the car with the letter "E". An all-terrain vehicle with a distance between the outer axles of 7,3 meters, still devoid of suspension, no longer galloped at 15-20 km / h: a large base was extinguished. However, the ZIL could no longer cope with the swing at 60 km / h, and the engineers had to put a speed limiter. 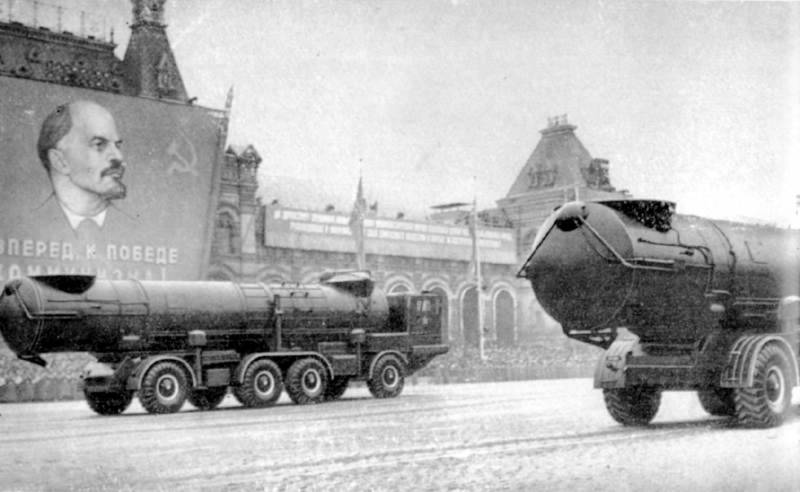 ZIL-135K walked along Red Square, swaying sedately, as if on waves. Source: denisovets.ru
Conceptually, the multi-axle vehicle was no different from its ancestor: the front and rear pair of wheels are steerable, two ZIL-375Ya gasoline engines and a non-differential transmission with an independent drive on each side. At first, the truck was equipped with a plastic cab from the experienced predecessor of the E series, but then a characteristic (also plastic) three-seat cab appeared. Reverse tilt of the glasses was required to exclude glare during daylight hours. The ZIL-135K was able to carry only the S-5 cruise missiles developed at the Chelomey Design Bureau. Weapon mounted in a 12-meter shipping container and launched forward along the movement of the car. 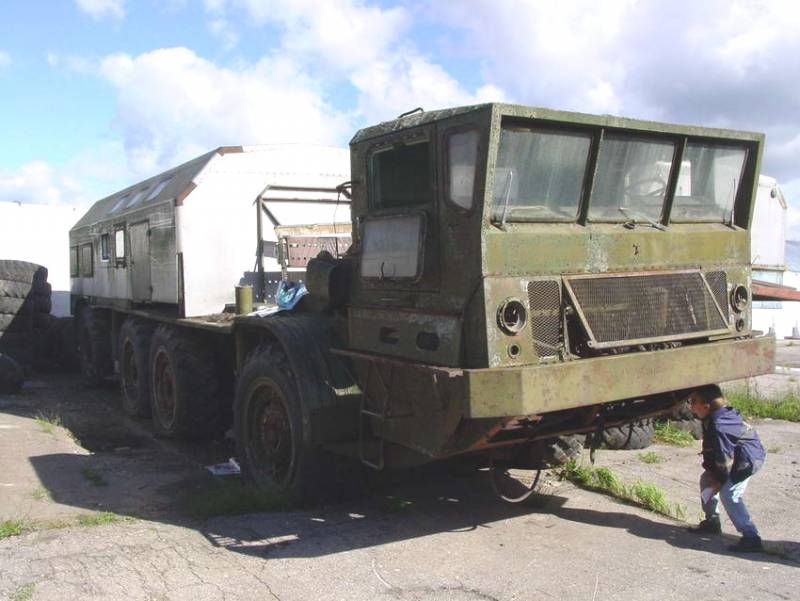 Source: denisovets.ru
It should be noted that the carrying capacity of the ZIL-135K was 10500 kg with its own curb weight of the same 10,5 tons. This is a unique parameter for domestic trucks, when machines are able to take on board a load equal to their own weight. The vast majority of Soviet trucks were not capable of this. One of the reasons was the archaism of some equipment, for example, the products of the Kremenchug Automobile Plant. But one should also remember about the harsh operating conditions, requiring a multiple safety margin, which ultimately affects the mass of transport. In the case of the ZIL-135K, this margin of safety was not so critical for engineers, and the car was able to take its weight. Naturally, this did not in the best way affect the reliability of the rocket carrier. However, the operating conditions of the cruise missile carrier were far from the hard everyday life of the army. Sometimes it is not entirely clear why such a machine needs the ability to overcome ditches and ditches up to 2,5 meters wide. Despite the contradictory design and thanks to the intercession of Khrushchev himself, the tandem of Grachev's truck and Chelomey's rocket under the name 2P30 was put into service on December 30, 1960. At ZIL, they managed to produce only five copies, and in 1962 they transferred production to the Bryansk Automobile Plant (BAZ). Here, another 80 vehicles were assembled, which in many ways determined the appearance of the Bryansk multi-axle vehicles for several decades to come. The characteristic angular cabin with a reverse slope of the windshield has become almost the hallmark of heavy trucks from Bryansk. And now, in modern BAZs, it is easy to recognize the features of the ZIL-135K missile carrier. As soon as the Zilovites melted 135K from their own plant, they immediately began to modernize it. Everyone hoped that a good tandem would emerge from a "think tank" in Moscow and an assembly plant in Bryansk. It didn't work out: BAZ is still alive, but ZIL ... Nevertheless, the SKB planned to install an anti-ship Redut at 135K, since the missile length was less than Chelomeev's, which made it possible to leave a large crew compartment behind the cockpit. They decided not to touch the rest and in this form to transfer to Bryansk to the assembly line. But engineers from the provinces took a creative approach to the issue and seriously redesigned the source code. Finally, one YaMZ-238 diesel engine with a capacity of 300 hp was installed on a heavy machine. from. with one gearbox and an inter-board differential gear that distributes torque to the wheels of each side. All of this has greatly simplified the design and reduced operating costs. As a result, the missile carrier received a new name BAZ-135MV, thereby finally branching off from the parent branch of development. "Redoubt" was adopted on the basis of the Bryansk vehicle only in 1982. On the same BAZ-135MB platform in 1976, the army received a tactical air reconnaissance complex "Flight" with a Tu-143 jet drone. 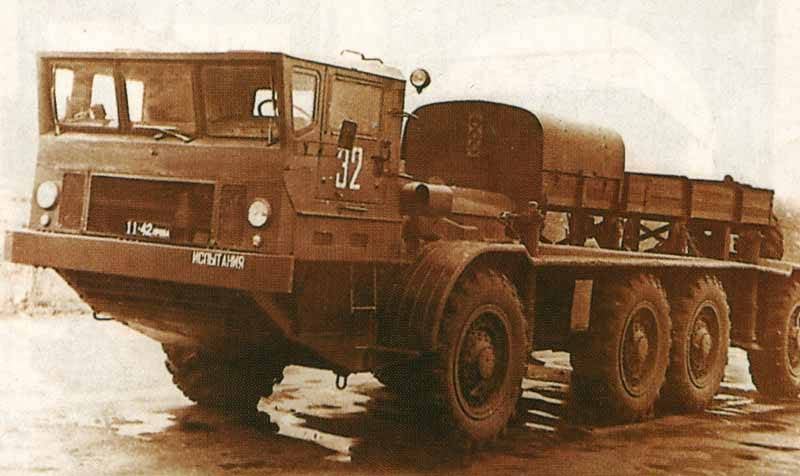 ZIL-135E with electric transmission. Source: denisovets.ru
Was in stories 135th model and little-known car equipped with an electric transmission. The truck with an onboard platform was named ZIL-135E and equipped with 2 generators, as well as 8 electric motors (one for each wheel). The arrangement with motor-wheels still seems non-trivial, but for the mid-60s it was revolutionary. Each such electric motor transmitted torque to the wheel through a two-stage planetary gearbox. Interestingly, a torsion bar suspension kit for the front and rear axles was prepared for testing a single prototype. The unit has been comparatively tested with the conventional 135 series rigid suspension. Among the advantages of the torsion bar suspension was the carrying capacity increased to 11,5 tons. With a rigid suspension, the experienced truck could only take 8,6 tons on board - the heavy electric transmission affected.

It is necessary to finish the history of the evolution of the best brainchild of SKB ZIL on the most common car in mass production. This right went to the ZIL-135LM model, which the Bryansk Automobile Plant produced more than 1993 thousand for thirty years before 5. All-terrain vehicles are still in service with the Russian army and many other states. The birth of the serial machine was preceded by the appearance of an experienced onboard ZIL-135L, which was built in 1961. The main innovation was the torsion bar suspension of the first and last axles of the truck, which entailed a reinforced frame. Dangerous galloping has seriously decreased, but it has not completely disappeared from the habits of the 135th machine. In 1962, four more cars were built and sent for comparative tests with the Bryansk all-terrain vehicle BAZ-930, which, in turn, was a deep modernization of the ZIL-135. Here, the Zilovites were fully affected by the inability to independently organize the assembly of complex military equipment. They did not do it, not because they did not know how, but because there were no free areas and hands - everything went to the assembly of the ZIL-130/131 and its modification. 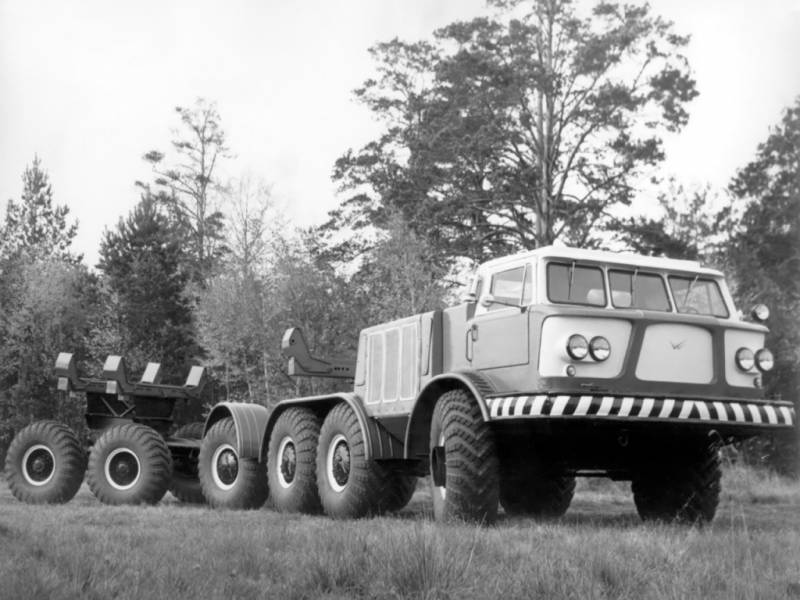 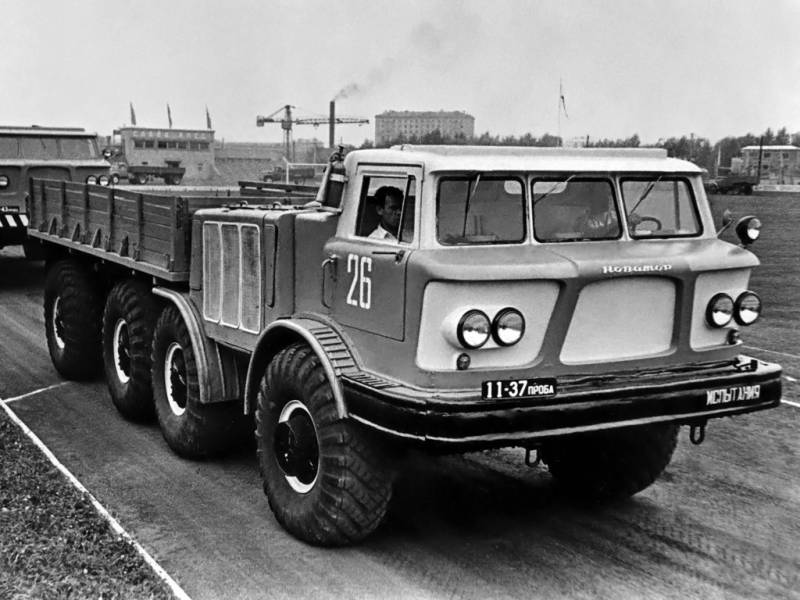 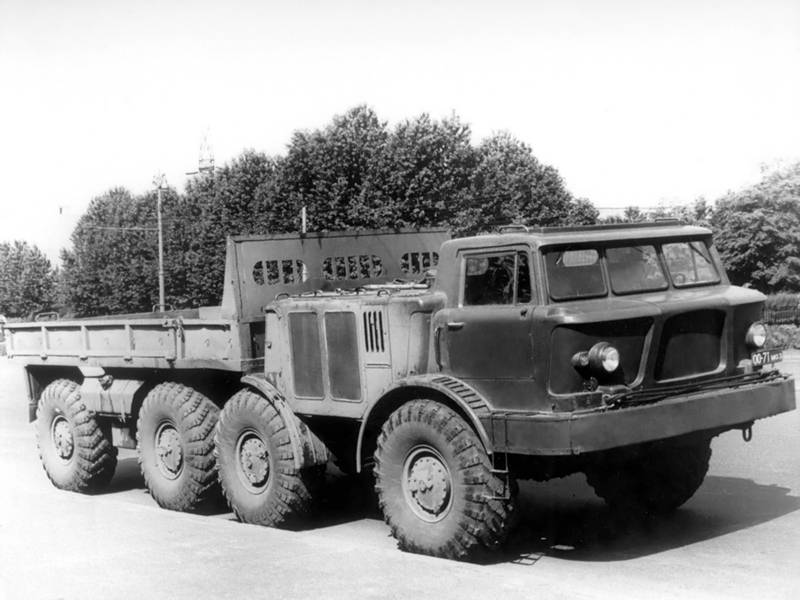 Experienced ZIL-135L on trials. As can be seen from the painting, the vehicles were intended for civilian buyers as well. But they were very expensive. Source: autowp.ru
As a result, third-party manufacturers (in particular, from Bryansk) rethought the ideas of SKB ZIL and offered their own options. In addition to the Bryansk car, a three-axle I-21 truck from Bronnitsy with an active semi-trailer took part in the competition at the NIIII-210 training ground, but it did not make much competition. During the tests of the military in the ZIL-135L, the high thrust of the wheeled platform was struck: at the level of the best tracked tractors, the car climbed a 47-degree unpaved rise. 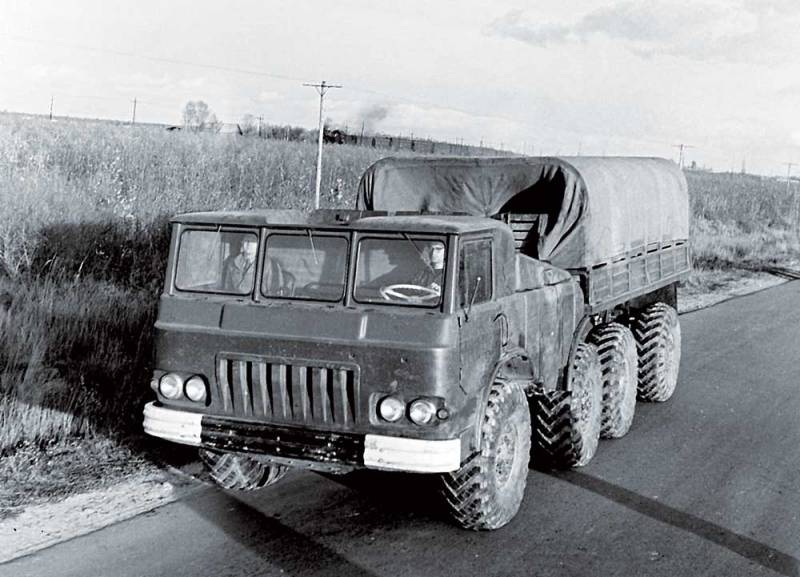 BAZ-930 posed a serious danger to the ZIL-135L. Source: denisovets.ru
From the test report of the engine-transmission unit:

The left hydromechanical transmission during the run worked smoothly and without changing the lubricant. The right hydromechanical transmission failed three times. With a run of 1283 km, the 2nd clutch failed; at 2281 km, the gearbox jammed, the 2nd clutch came out of standing; at 3086 km, the torque converter broke down due to heavy wear of the reactor washers, and again there were problems with the 2nd clutch.
Nevertheless, this time Bryansk did not manage to break the competence of Moscow, and ZIL-135L won the tender for the supply of several thousand vehicles as a platform for the Uragan MLRS and the Luna missile system. The engineers from Bryansk, obviously, were much upset by the loss of the BAZ-930 and put forward an ultimatum: the release of the ZIL-135L is possible only with a manual gearbox. The development of a complex planetary automatic transmission in Bryansk was categorically refused, although its own BAZ-930 was tested with an “automatic”. 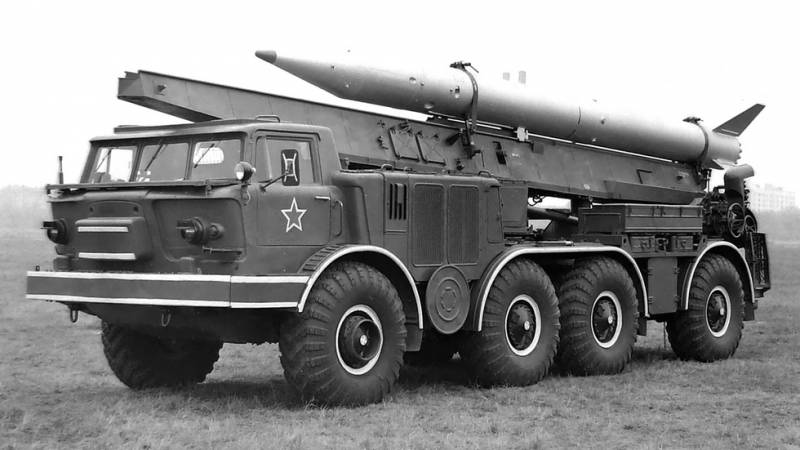 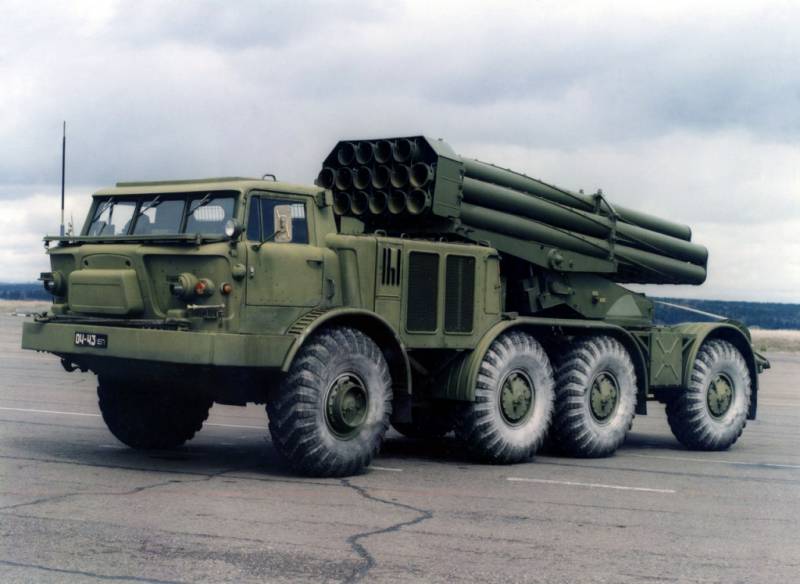 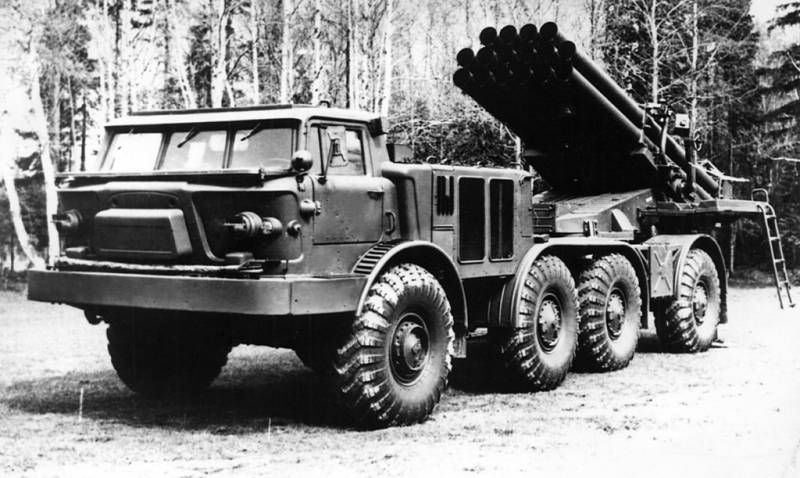 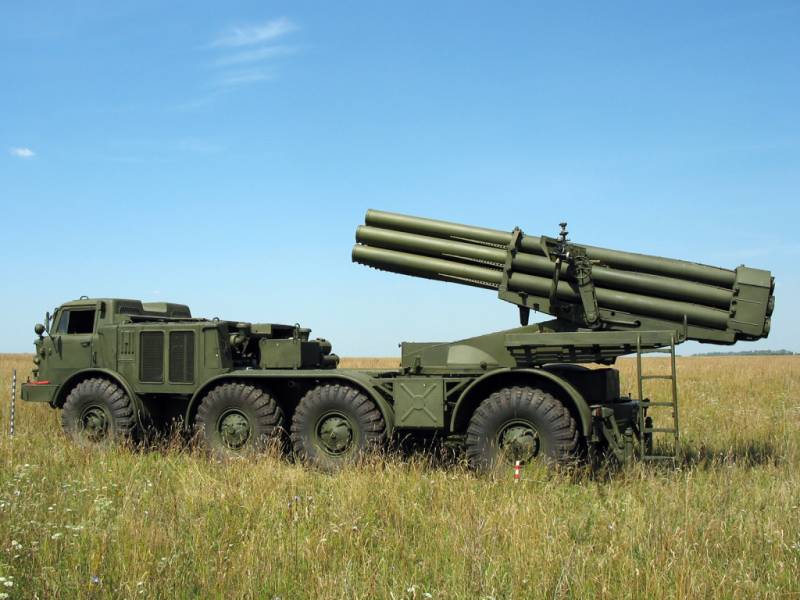 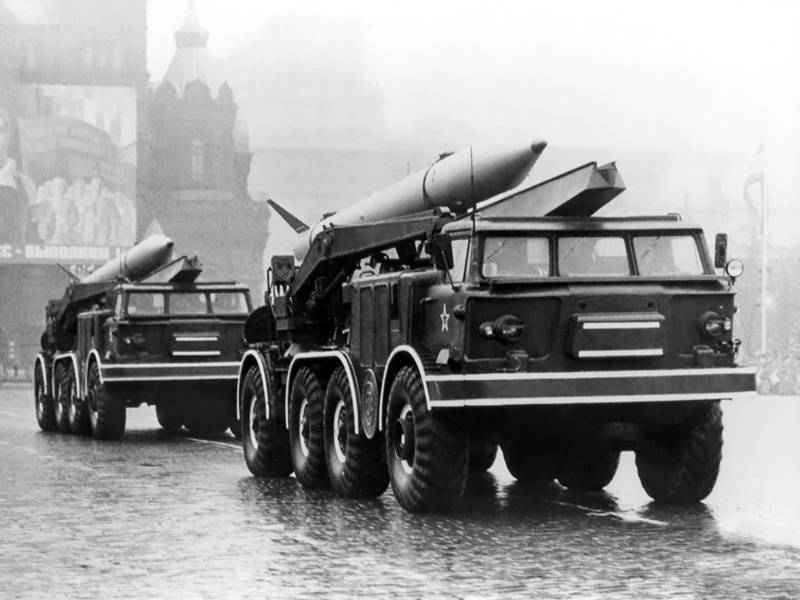 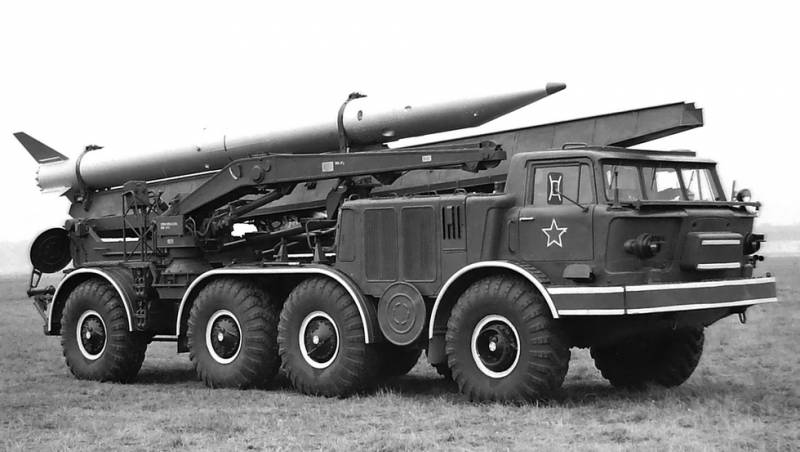 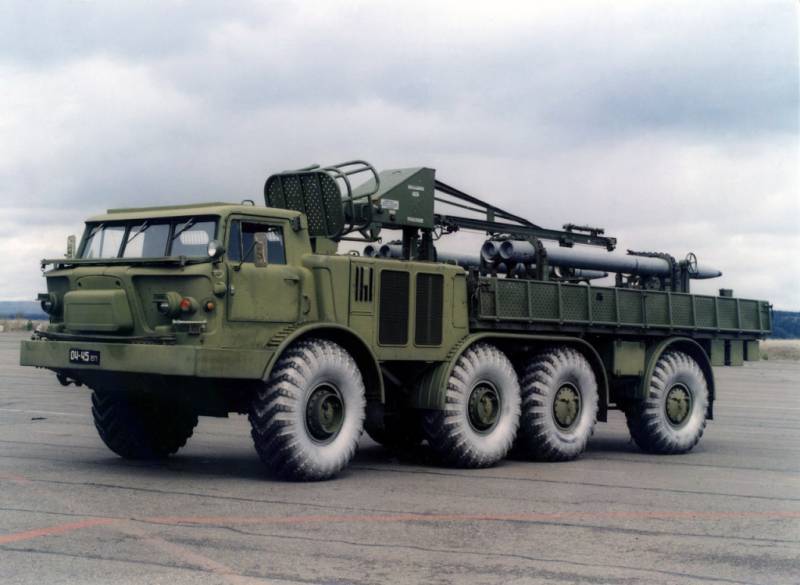 ZIL-135LM in various roles. Source: autowp.ru
The introduction of a mechanical gearbox would inevitably reduce the vehicle's cross-country ability, since the power flow was broken when shifting. Muscovites had to urgently develop a new scheme with two five-speed gearboxes and two transfer cases. Because of the "harmfulness" of the Bryansk engineers, the cross-country ability of the ZIL-135LM decreased, although at the same time the fuel consumption also decreased. After testing, the military also pointed out a complex and unreliable gearshift mechanism, and also recommended installing an independent suspension on all wheels. As a result, no one began to alter anything, and the ZIL-135LM unchanged in 1963, despite all the machinations of Bryansk, went to the troops. Disputes with Bryansk competitors and military specialists from NIIII-21 regarding the final design of the machine cost Vitaly Grachev health: on October 13, 1963, the chief designer was hospitalized with a heart attack.