Unmanned surface ships: the threat from the West 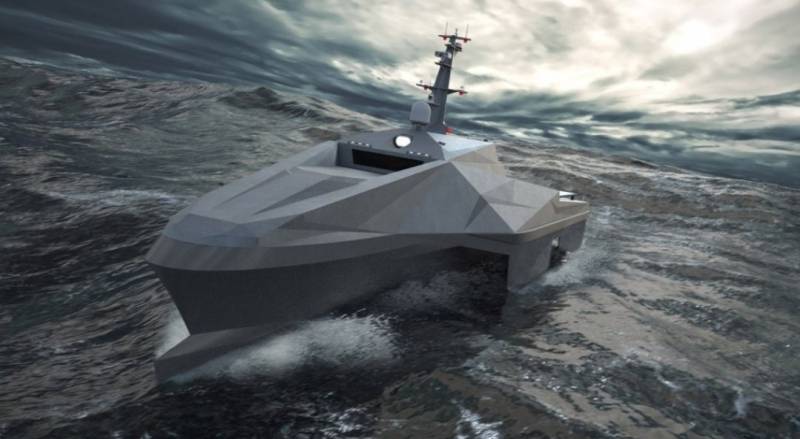 Fleet in the laggards

One of the main trends in the modernization of the armed forces of the leading countries of the world is equipping them with an increasing number of different types of unmanned and remotely controlled equipment.

This primarily concerns aviation: unmanned aerial vehicles (UAVs) have already become an integral part of the air forces (Air Forces) of technologically developed countries, and the list of tasks they solve is constantly expanding. The absolute leader in this direction is the United States, followed by Israel, China, Turkey and many other countries are actively building up their UAV fleet. Recently, there have been positive trends in equipping UAVs and the Russian Air Force. 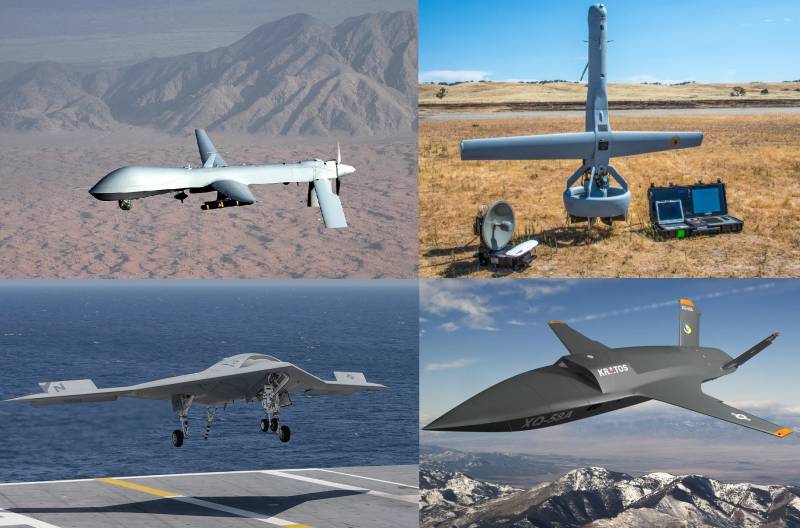 UAVs already make up a significant part of the air forces of the leading countries of the world
Ground-based robotic systems are also slowly but surely developing, although their number is not yet comparable to the number of UAVs. Originally intended for mine clearance and reconnaissance, they are increasingly equipped with various types of weapons for direct combat. Russia in this direction can be considered one of the leaders, if not in the proliferation of ground-based robotic systems in the troops, then in the number of available developments. 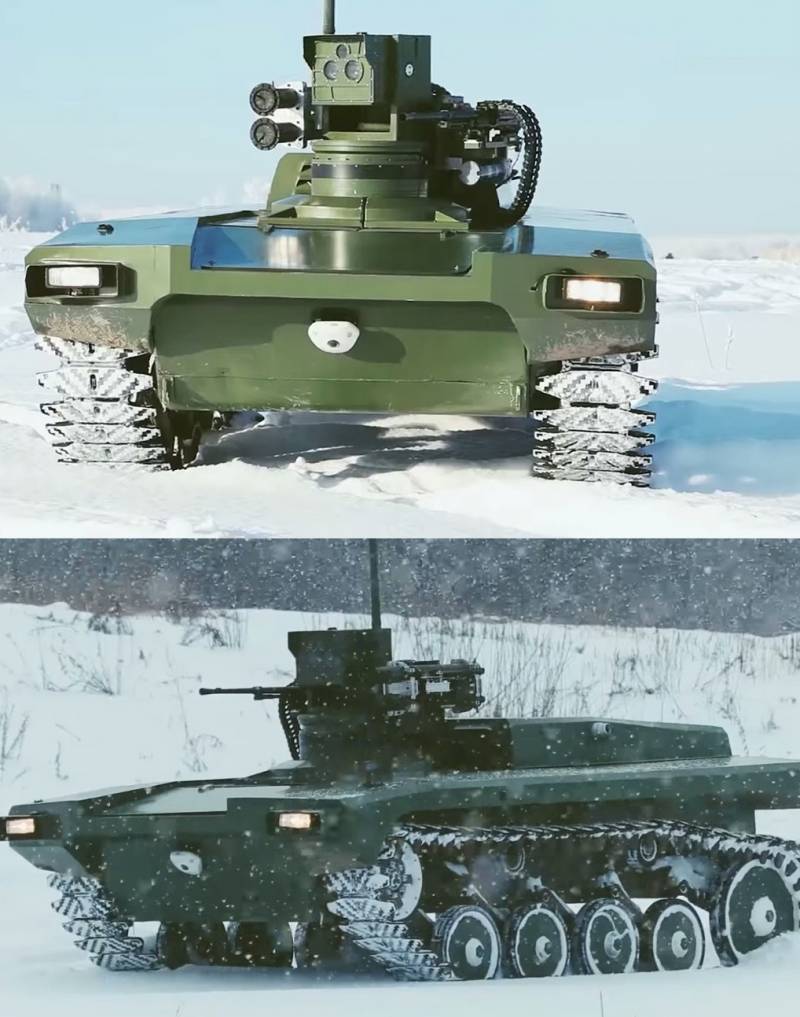 Russian combat robot "Marker"
With sea / ocean unmanned surface ships (BENK) and unmanned underwater vehicles (UUV), everything is more complicated. The aircraft is operated by 1-3 people, and they do not carry out maintenance, it is carried out at the airport by special personnel, and UAVs are serviced in the same way.

With ground combat equipment, everything is more complicated. Let us recall the disputes between supporters and opponents of the introduction of automatic loaders in Tanks: One of the arguments "against" is that it is much easier for four (with a loader) to service a tank than three.

A ship or submarine, both due to its size and due to the possibility of being on a long autonomous campaign, requires the presence of a significant crew for its maintenance. Since it is still unrealistic to make an unmanned destroyer capable of staying at sea for months without human service, the development of marine "drones" comes from small ships - unmanned boats (BEC) capable of operating near the coast or carrier.

Russian unmanned boat Iskatel, developed by Aviation and Marine Electronics and Design Bureau Luch (left), and an experimental prototype of an autonomous radio-controlled boat with side-scan sonar Kalan from Tethys Pro (right)
Nevertheless, in the technically most developed countries of the world, work is underway to create a BENK of both increased displacement and increased battery life.

The US Navy is working with the defense agency DARPA to develop the No Marines Required Ship (NOMARS) BANK. 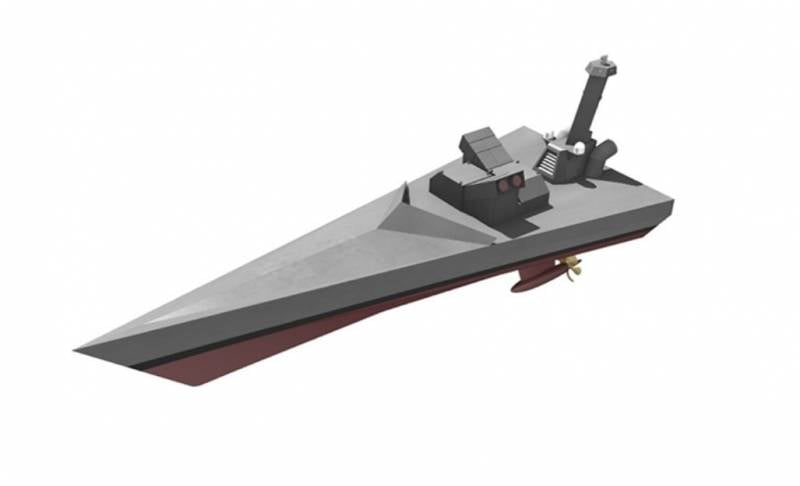 Render of BANK NOMARS, intended for reconnaissance and missile strikes
However, much closer to serial production is the American BANK Sea Hunter, realized according to the trimaran scheme. BANK Sea Hunter was developed by Leidos with the support of DARPA. First of all, it is designed to combat submarines at a depth of 400 meters, as well as to track surface ships and conduct electronic warfare (EW).

The dimensions of the BANK Sea Hunter are 40 meters long and 12,2 meters wide, the width of the central hull is 3,35 meters, and a displacement of 145 tons. The maximum speed is 27 knots, at a speed of 21 knots, BANK Sea Hunter can operate in rough seas of six points, at a lower speed up to seven points. BANK Sea Hunter will be able to autonomously perform combat missions for three months, passing during this time 13 miles (391 km) at a speed of 24 knots or 800 miles (12 km) at 23 knots. 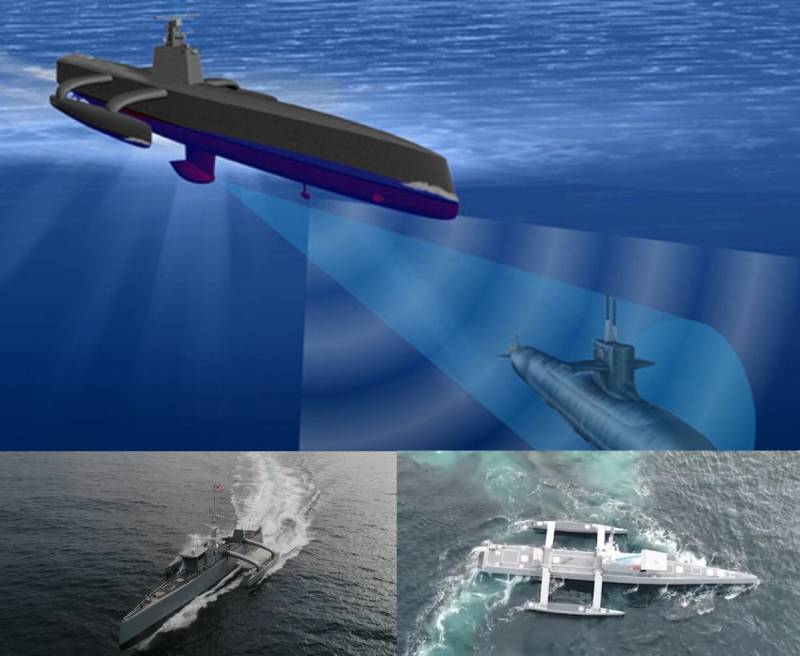 BANK Sea Hunter
BENK Sea Hunter is equipped with an MS3 sonar station, capable of detecting submarines, torpedoes, and unmanned underwater vehicles in active and passive modes. There is also a magnetometer on board. The estimated range of detection of submarines is about 10 miles at a speed of 5-7 knots of the Sea Hunter BENK.

Armament on the BENK Sea Hunter is currently absent, but it can be installed in the future: it is assumed that Leidos is now developing a more advanced Sea Hunter 2.

According to the US Naval Forces Budget Director Rear Admiral Randy Crites, in the foreseeable future the United States plans to produce large unmanned surface ships with a hull length of about 60-100 meters and a displacement of about 2000 tons.

It is planned to install a significant amount of electronic equipment on promising "large" BENK, the displacement of which is close to the "corvette", including radar and hydroacoustic stations (radar and GAS), optoelectronic sensors, advanced communication facilities, encryption and decryption equipment, on-board computers for processing incoming data and decision making. It is planned to equip such ships with rapid-fire small-caliber automatic cannons, ESSM anti-aircraft guided missiles (SAMs) in vertical launchers Mk 48 and 324-mm anti-submarine torpedo tubes. It is also planned to equip BENK with an unmanned helicopter for reconnaissance. 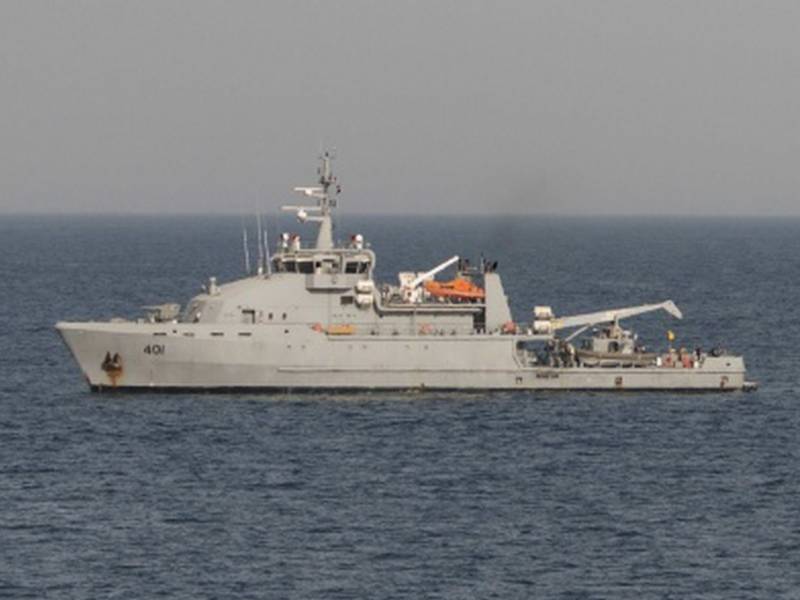 The high seas support ship RiverHawk OSV 60 with a displacement of 1400 tons is considered as the basis for promising BENK
You can also mention the BENK projects presented by Austal USA in 2019. The projects presented include medium and large BENK, equipped with a variety of reconnaissance and weapons. 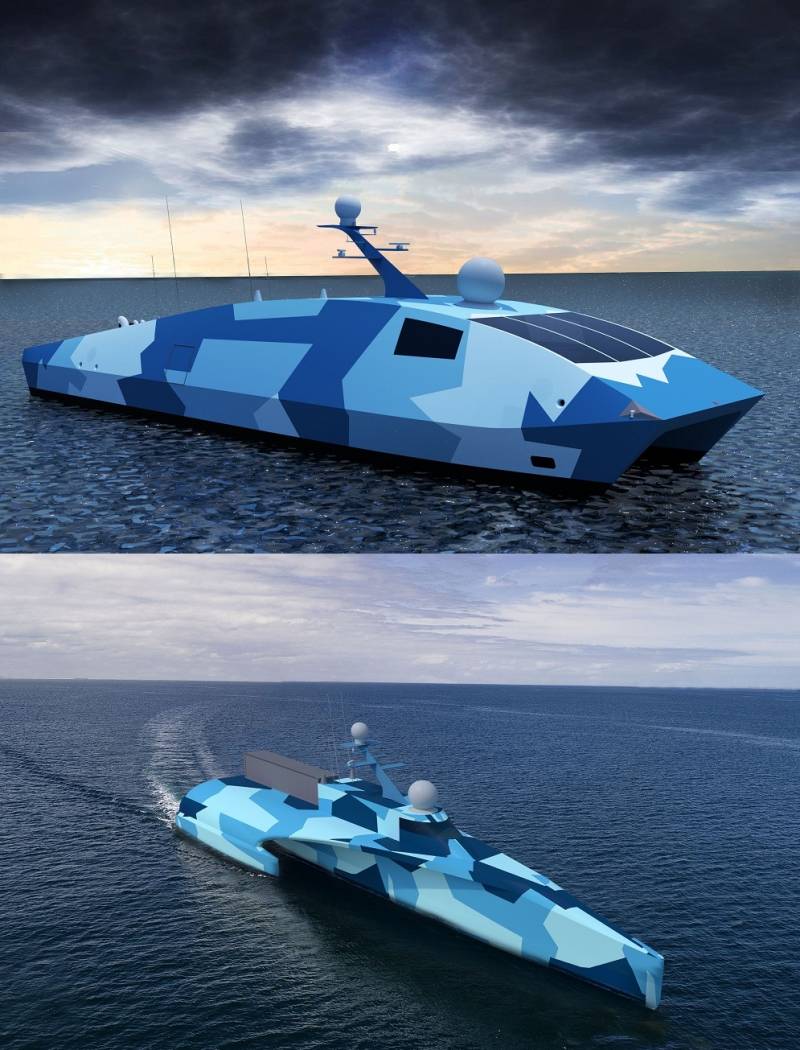 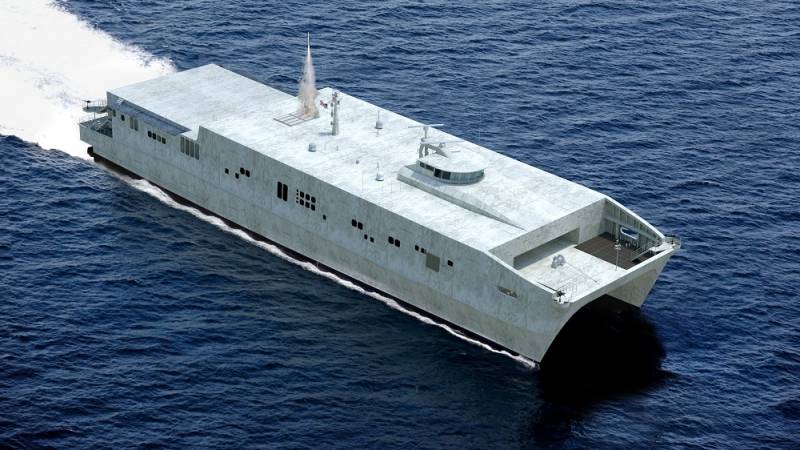 In addition to the United States, other countries are actively developing unmanned ships. In particular, you can recall the British experimental modular PANC of the Rolls-Royce company. An unmanned ship with a length of 60 meters and a displacement of 700 tons should be equipped with a 4 MW diesel generator power plant and a power plant with an electric motor of 1,5 MW power, rudder propellers and bow thrusters. The speed of the British BENK will be about 25 knots, the maximum cruising range at an economic speed will be 3500 nautical miles with the ship's autonomy up to 100 days.

The modular platform provides for the completion of the British BENK with a variety of equipment and weapons, ensuring the solution of highly specialized tasks: reconnaissance, electronic warfare, striking, etc. 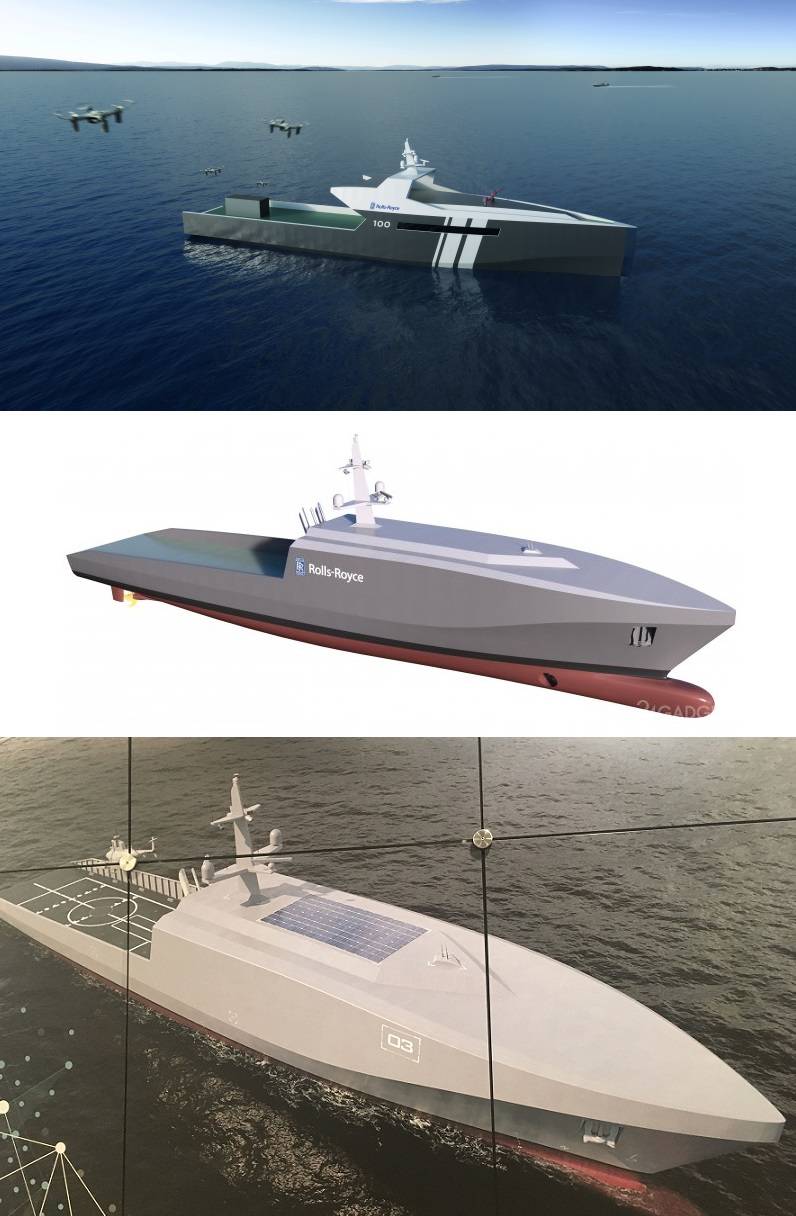 Rolls-Royce modular PANC concepts
Another British company, BMT, is developing the BANK pentamaran, capable of high speed and operation in almost any weather. Pentamaran is a ship with five parallel hulls connected in the upper part; it was developed back in the USSR on the Polimaran-PPR platform (spatial floating lattice). The advantages of the pentamaran are the highest stability (rollover resistance is maintained even with a roll of 70% -80%) and low resistance, which allows a high speed of movement. 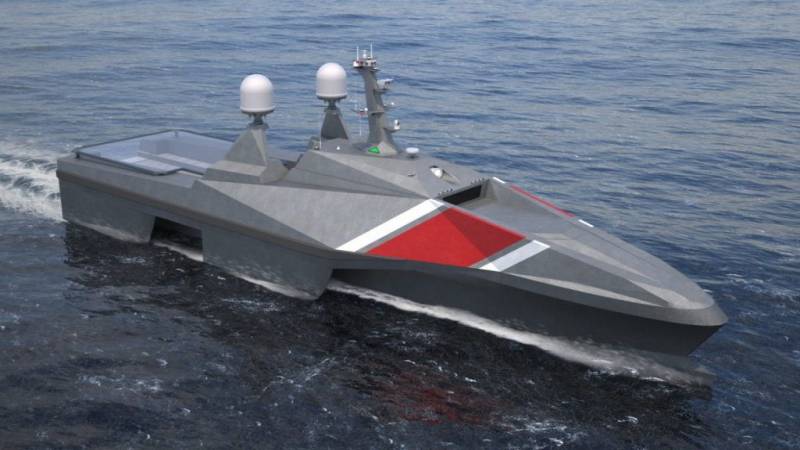 Also, Western companies are developing civilian unmanned ships. The Norwegian company Yara International, together with the Kongsberg Grupp, plans to launch in the near future an unmanned cargo ship Yara Birkeland with an electric propulsion system, capable of transporting 100-150 containers. The cost of the promising unmanned transport ship Yara International will be about $ 25 million, which is three times more than the cost of a conventional vessel of this class, however, due to the savings on fuel and crew, it will be 90% more economical than the ships of this class currently in operation, which will quickly recoup the initial investment ...

Concepts of unmanned transport vessels of the Norwegian company Yara International (left) and British Rolls-Royce (right)
The Norwegian project of the Yara Birkeland and similar projects of cargo ships of the Rolls-Royce company indicate the technical capabilities for the construction of unmanned ocean-class vessels with the appropriate autonomy, which can serve as the basis for the construction of warships. For example, unmanned supply ships or arsenal ships.

Strictly speaking, geographically Israel is not the West, but technically, politically and militarily, Israel is an integral member of the coalition of Western countries.

The Israeli Navy has studied the use of unmanned boats since the early 2000s, but in 2020 it was reported that the Israeli Navy decided to terminate the BEZ operation program due to the negative experience of their use, including low power-to-weight ratio, low survivability due to system failures that there is no one to repair, as well as the complexity of managing the BEC on the high seas At the same time, it is noted that unmanned boats show themselves well as a means to combat submarines, as well as for mine action.

The specificity of the Israeli Navy is that they did not purchase BECs, but rented them from manufacturing companies, therefore, in order to curtail the program of using BECs, it is enough for them not to renew their lease. 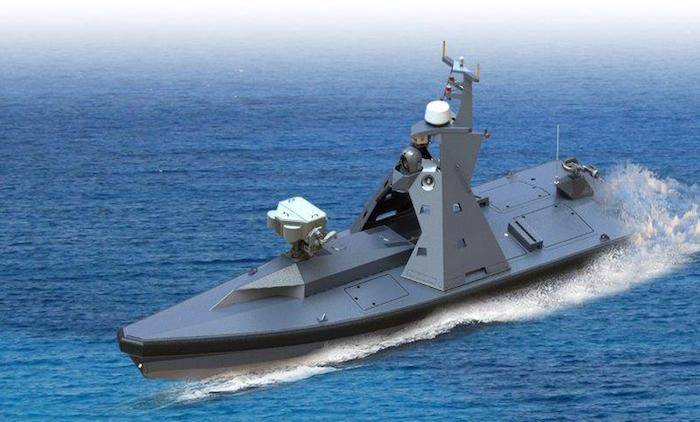 Unmanned boat Protector of the Israeli defense company Rafael Advanced Defense Systems
It can be assumed that the reasons for the negative perception of the BEC of the Israeli Navy are the insufficient development of technical solutions, which does not allow to ensure sufficient reliability of the equipment, as well as the small displacement of the BEC, which does not provide them with sufficient seaworthiness.

Along with the development of UAVs and ground-based robotic combat equipment, the creation of unmanned ships and boats is becoming one of the leading trends in the development of the Navy in Western countries. At the moment, the development of BEC and BENK lags significantly behind the creation of UAVs: there are fewer projects implemented, the degree of their involvement in the activities of the armed forces is much lower. However, all this can quickly change if technologies are developed and truly effective solutions appear.

Russia has significantly lagged behind the leading countries in the development of UAVs, only recently there have been advances in reducing this gap. It is necessary to carefully study foreign experience and prevent the occurrence of such a situation during navy.

In the following articles, we will consider BENK, as well as unmanned underwater vehicles (UUVs) from other countries.

Ctrl Enter
Noticed oshЫbku Highlight text and press. Ctrl + Enter
We are
Surface ships against the aircraft. Rocket eraAbout the future of underwater robotics
28 comments
Information
Dear reader, to leave comments on the publication, you must to register.