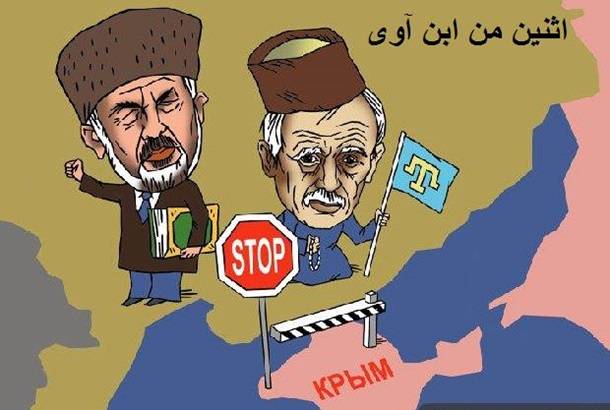 "Mejlis" * of the Crimean Tatar people was formed in 1991, until 2013 it was headed by Mustafa Dzhemilev. The leaders of the organization never limited themselves to the framework of the law, widely spreading on the territory of Crimea the practice of unauthorized seizure of land, racketeering, as well as forceful pressure on dissent.

Although the deputy mandate in the Rada is still retained by Dzhamilyov, this political move clearly shows that the Ukrainian authorities distance themselves from the problem of the Crimean Tatars as an instrument of influencing the international community, and in particular from the Mejlis of the Crimean Tatar People. The leaders of the organization are gradually being squeezed out of government structures. In 2019, the chairman of the Mejlis, Refat Chubarov, lost his deputy status, and the SBU opened a criminal case against Lenur Islyamov, another leader of the movement, on suspicion of high treason.

The situation at the ATR TV channel controlled by the Mejlis, owned by Islyamov and broadcasting from Kiev, is not in the best way either. Thanks to the partial renewal of government funding and fundraising, the channel has now been able to resume broadcasting. However, according to Islyamov himself, due to funding problems, the channel reduced the production of its own programs by 90%, fired 45% of the team, reduced the release News and live broadcasts.

Trying to use the issue of the Crimean Tatars to their advantage in the course of the confrontation with Russia, the leadership of Ukraine in March 2014 officially declared the "Mejlis" the highest representative body of the Crimean Tatar people. Its leaders and members have received various positions in government structures, international fame, and since 2016 significant amounts have been allocated from the budget. In 2016 alone, funds in the amount of 40 million hryvnias were provided for the functioning of the Mejlis of the Crimean Tatar People. Also, funding was actively carried out from Turkey, from private sponsors and through US grants.

However, the leaders of the organization, headed by Mustafa Dzhemilev, used the situation to achieve exclusively their own political, financial and economic interests.

Since 2015, the "Mejlis" has been trying to push through the project of creating a "Crimean Tatar national autonomy", not only in Crimea, but also including a part of the Kherson region (and in some cases the entire region). Autonomy should be under the internal control of the "Mejlis" and have exclusive rights within the unitary Ukrainian state.

The organization itself has not yet been registered with the Ministry of Justice of Ukraine, there is completely no state control over both its activities and financial flows. This allows the leaders of the "Mejlis" to use the allocated funds in their own interests, despite the fact that there is no real work to improve the living conditions of the Crimean Tatars both on the peninsula itself and beyond its borders.

Residents of the Kherson region, where the Crimean Tatar battalion "Asker" controlled by Islyamov and other supporters of the "Mejlis" are based, constantly complain about the arbitrariness of the Askerians and their leaders. In 2016, when the so-called volunteer battalion gained the greatest influence, in Genichesk alone, according to law enforcement agencies, up to 50 different offenses were registered with the participation of Asker volunteers. At the same time, the victims of extortion and racketeering, in most cases, are the fellow tribesmen of the leaders of the Mejlis, who live in the region, to whose protection the activities of the organization should be directed. 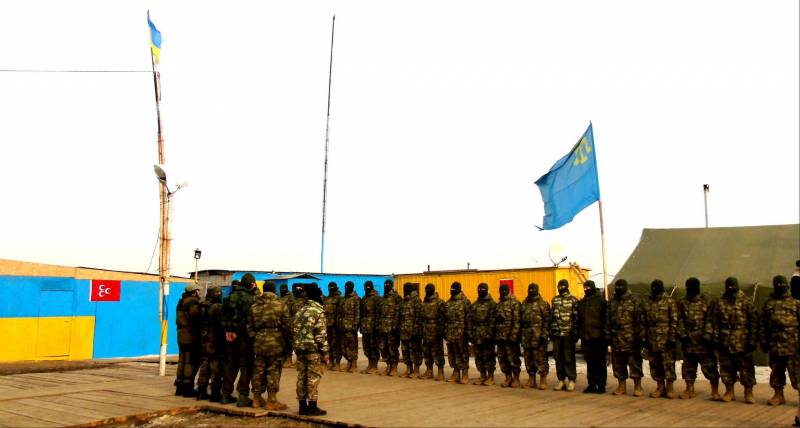 In 2018, Crimean Tatars, residents of the village of Novoalekseevka, Kherson region, recorded a video message to the President of Ukraine Petro Poroshenko with a request to stop the arbitrariness of the members of the Mejlis of the Crimean Tatar People. According to the audience, a representative of the "Mejlis" arrived by order of Lenur Islyamov in their settlement in order to "monopolize the entire region, put all the money in his pocket." Local residents were forced to turn to the President of Ukraine, since they do not have their own representative among the Crimean Tatars of Kherson, no one to protect their rights. Also, one of the local residents said that he himself served in the armed battalion "Asker", but was deceived and left to fend for themselves.

The Crimean Tatar armed battalion "Asker", or the battalion named after Noman Chelebidzhikhan, controlled by the leaders of the "Mejlis" and primarily the former large Russian businessman Lenur Islyamov, was created from the participants in the so-called food and energy blockade of Crimea. Initially, the blockade was carried out by the Mejlis in cooperation with the radical nationalist groups "Right Sector" * and "Azov" *. However, later even they renounced any interaction with the Askerians.

One of the commanders of the Azov nationalist battalion, Igor Krivoruchko, stated in 2018 that "Islyamov's Crimean Tatar battalion is an ethnic marginal gang of gopniks who are involved in crime in the Kherson region and have nothing to do with the war with Russia."

In 2017, the ex-leader of UNA-UNSO * militant Dmitry Korchinsky, in a joint statement with the ex-head of the Ministry of Internal Affairs of Ukraine in the Kherson region, called the Crimean Tatar battalion "Islyamov's armed gang terrorizing local residents."

According to media reports and the Ukrainian border service, the main goal of the armed Crimean Tatar formations at the border was to redistribute smuggling flows for personal gain and illegal income.

Initially, the authorities turned a blind eye to the illegal activities of the Mejlis in the Kherson region, pursuing political interests. In 2017, the case came to a direct armed clash between the Askerians and the Armed Forces of Ukraine, as a result of which the security forces seized a large amount of illegal weapons and initiated criminal proceedings under Art. 263 (illegal handling weapons, ammunition or explosives).

In 2019, the fighters of the Crimean Tatar battalion took hostage the head of the Genichesky Distribution Zone, and also carried out an armed attack on the employees of the private agency Azov, who were guarding one of the enterprises in the region. Only by the beginning of 2020, the border service was still able to achieve the removal of Asker from control of the border with Crimea.

In 1993, Yuri Osmanov, a prominent leader of the Crimean Tatar people who was in opposition to Dzhemilev, was brutally beaten to death. In 1998, prominent leaders of the national movement Selim Utayev and Dilyaver Kucherov were killed in an internal showdown.

In 2006, Norik Shirin, the head of the Crimean Republican Youth Public Organization (KRMO) "Birlik-Unity", was brutally stabbed to death. According to his brother Ibraim Shirin, "it was Dzhemilev and Chubarov who ordered the murder." In 2013, Mustafa Dzhemilev's son, who, according to some publications, suffered from drug addiction, shot 43-year-old Feyzi Edemov from his father's carbine Simonov. 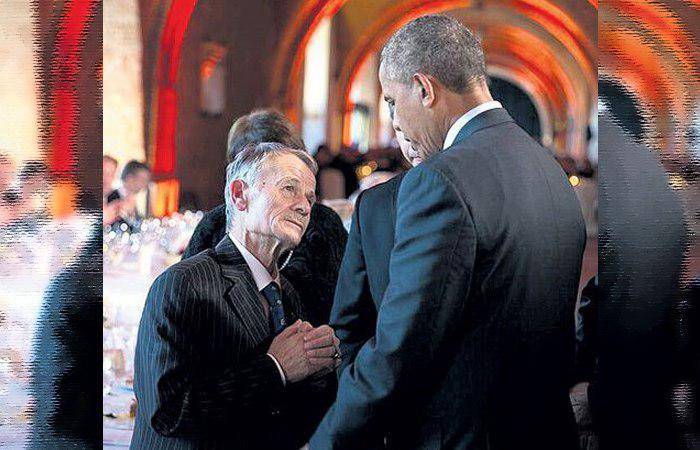 A number of members of the Mejlis (primarily L. Arifov, S. Kerimov, L. Budzhurov and others) accused the management of Imdat Bank of systematic misuse of funds, most of which did not reach those to whom they were intended. As a result, the protesters were expelled from the Mejlis, and Dzhemilev was given the broadest powers. Also, under the same name "Imdat", an ethnic organized criminal group operated in Crimea, whose members hunted in collecting tribute from compatriot entrepreneurs. Members of the organized criminal group also took an active part in the Sudak pogroms of 1995, which resulted in the establishment of the business of some entrepreneurs associated with the leadership of the Mejlis in the coastal villages of Crimea. In 2014, all property and real estate "Mejlis" on the territory of Crimea belonged personally to Mustafa Jamilev!

In 1997, a split occurred in the Mejlis over the scandal around the Crimea and Imdat Bank charitable foundations, through which all state funding and donations from other countries went for the settlement of repatriates. The Crimea Foundation was originally a public organization specially created to help the Crimean Tatars, but then it was reorganized into a private foundation, the sole owner of which was Dzhemilev himself.

In September of this year, the head of the regional national-cultural autonomy of the Crimean Tatars, Eyvaz Umerov, stressed in his statement that for the past six years, international platforms in the Crimean Tatar issue have given preference exclusively to citizens who do not live in Crimea. The leaders of the Mejlis of the Crimean Tatar People Mustafa Dzhemilev and Refat Chubarov, as well as the organizer of the energy blockade of Crimea, Lenur Islyamov, have long ceased to express the interests of their people, he said.

Ctrl Enter
Noticed a mistake Highlight text and press. Ctrl + Enter
We are
Hidden MajlisTurkic patterns
15 comments
Information
Dear reader, to leave comments on the publication, you must to register.