Anniversary of the Munich Agreement. A shameful page in the history of "democratic" Europe 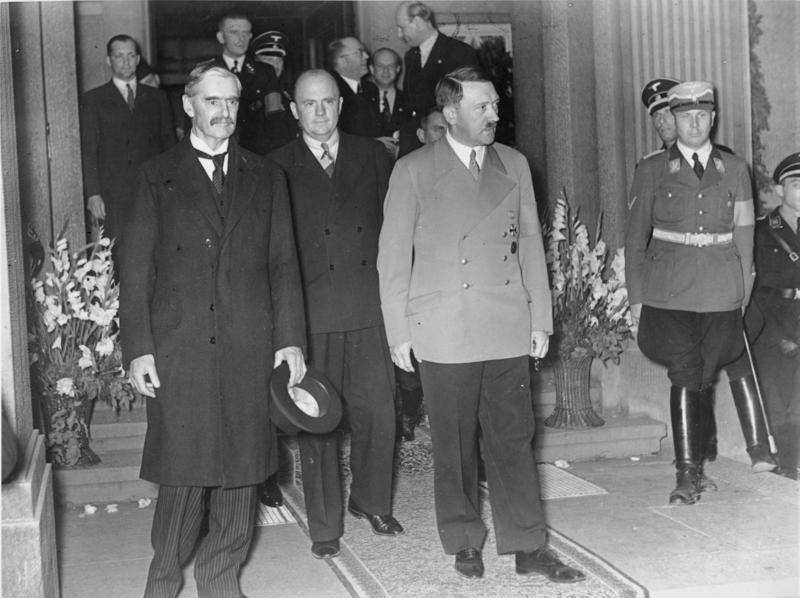 If you try to find in the European stories of modern times, those pages that absolutely do not allow double interpretation and can only be regarded as an occasion for the most burning shame and repentance, then one of the first lines in their list, no doubt, should be occupied by the agreement concluded on September 29, 1938 in Munich, Germany ...


The irony of fate lies in the fact that with this truly treacherous act, the then "collective West" hoped to deploy the military machine of the Third Reich, which it created and gaining more power, to the East, towards the Soviet Union, and, in fact, laid the foundation for World War II. The same one, in the course of which the pavements of his own capitals were trampled under the boots of Hitler's soldiers ...

Czechoslovakia was one of the brainchildren of the "Versailles system", which recorded the collapse of old European monarchies and empires, including Austria-Hungary. And at the same time, she plunged Germany into the abyss of ruin, disaster and humiliation she had never seen before. In Prague, the Sudetenland, inhabited mainly by Germans, was considered one of its own very successful territorial acquisitions, but in vain. It was precisely “the deep aspirations of its inhabitants, eager for reunification with their historical homeland” (mostly inspired by Berlin) that Hitler used as a pretext for putting forward territorial claims to Czechoslovakia.

I must say that this was not the first demarche of the Fuhrer of this kind. The "tests of the pen" undertaken by him so far have been the introduction of German troops into the demilitarized Rhineland and the German Anschluss of Austria. In principle, both cases were gross violations of the Versailles Treaty (as well as the creation of the Wehrmacht in principle) and were the finest "casus belli" in order to crush the Nazi monster in the bud. Then, for this, and war, in fact, would not be needed: a police operation by the forces of a "limited contingent" would have finished with Hitler without any special problems.

The problem was that neither London nor Paris was going to do anything of the kind. They dreamed of destroying the USSR with someone else's hands, and the ominous Third Reich was perfect for this. That is why, after the two crises inspired by the Nazis in the Sudetenland that followed one after the other (in the spring and autumn of 1938), which heated up the situation to the brink of war between Germany and Czechoslovakia, Britain and France took the position of "appeasing" Hitler, and in fact presented him with a gift box only the region in dispute, but the rest of the country.

The only state that was ready to fight the aggressor without hesitation was the Soviet Union. And if in March 1938 in Prague they were still picky about refusing our military assistance, by September the local politicians “matured” to accept it. Alas, it was too late: the Anglo-French representatives bluntly declared to the Czechs that in this case they would not only not join the anti-Hitler coalition, but, on the contrary, would do everything to turn this war into an “anti-Bolshevik crusade”. That is, London and Paris were ready to fight shoulder to shoulder with Berlin against the USSR and all its allies, if they were found.

The most aggressive and insidious position on this issue was taken by Poland. Warsaw not only categorically refused to let the Red Army units that would have gone to the aid of Czechoslovakia pass through its territory, but also promised to attack any Soviet aircraft that tried to cross the airspace for this purpose. In response, the USSR threatened the Poles with war for an attempt to occupy Czechoslovak territory and concentrated a significant military force on the western border. Warsaw did not turn her ear. However, there is nothing surprising: we should not forget that at that time it was Poland that was a military-political ally of the Third Reich and subsequently, with the partition of Czechoslovakia, received its piece of territory.

I must say that the army of Czechoslovakia could well repel the attack of the Wehrmacht on its own. At that time, it even surpassed him in terms of armament and technical equipment, and the beautiful fortified areas in the same Sudetenland gave every chance to turn this campaign for the Germans from an easy walk into a blood bath. It is reliably known that in such a case (and even more so if France and Britain entered the war on the side of Prague), the German generals had very specific plans to remove Hitler from power and even arrest him for a hopeless military adventure he had started. But nothing of the kind happened.

British Prime Minister Chamberlain promised Czechoslovakia to Hitler "without war and delay." And so it all happened. The representatives of Britain, France and Italy who arrived in Munich did not even consider it necessary to admit the Czechoslovak delegation into the hall where the fate of her country was being decided. From the USSR, no one was simply present - they were not invited, knowing perfectly well the position of our country. The unfortunate Hubert Masaryk and Vojtech Mastny were admitted to the table, on which there was already a ready-made text of the agreement, under which were the autographs of Hitler, Mussolini, Chamberlain and Daladier. No one listened to their timid "expression of protest". A real shameful page in the history of "democratic" Europe.

The Sudetenland went to the Third Reich immediately - President Beneš did not even try to argue with the decisions made in Munich. Czechoslovakia had less than a year to exist. Hitler's allies Poland and Hungary began to tear it to pieces ... In March 1939, Slovakia announced its secession, turning into another Nazi satellite, and the pitiful remnants of the Czech Republic were occupied by the Germans, turning into a "protectorate of Bohemia and Moravia." The Wehrmacht got huge Czech arsenals, and, more importantly, military factories, some of the best in the world, which subsequently, until 1945, will regularly supply the "Aryans" with weapons and military equipment. First of all, for the war with the USSR.

The main result of Munich was Hitler's confidence that while he was advancing his armies to the East, there was no need to fear a blow from Britain and France. However, the Fuhrer was not a fool, and he perfectly understood that sooner or later he would get a knife in the back. So, before going to Moscow, I decided to deal with those who intended to use it, but in the end they themselves turned out to be a fool. The prophet who quite correctly predicted the consequences of the Munich Agreement was Chamberlain, who did not sign it, who got off the plane in Britain with the words that he had “brought peace for a whole generation,” and his political opponent Winston Churchill.

The one who was to lead Britain during the Second World War, on the same day uttered a catch phrase that, choosing between war and shame, England chose shame. But soon he will also get a war. And so it happened. Today, trying to reproach our country for the Molotov-Ribbentrop pact, the West categorically refuses to admit that the Second World War, like the Great Patriotic War, which cost our people many millions of victims, was predetermined precisely then, on September 29, 1938.

Ctrl Enter
Noticed oshЫbku Highlight text and press. Ctrl + Enter
We are
Reports from the militia of New Russia for 27-28 September 2014 of the yearDecember 2010 years. Russian March. Senseless and merciless? Notes not a Russian person
62 comments
Information
Dear reader, to leave comments on the publication, you must to register.