The defeat of the 3rd Soviet army in Belarus 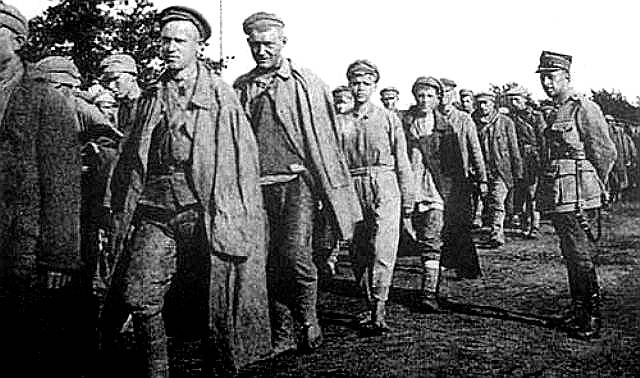 Prisoners of the Red Army

By the morning of September 25, 1920, the 3rd Soviet Army withdrew across the Neman, maintaining bridgeheads on its western bank. The Soviet command planned to create a new front in the direction of Druskeniki, occupied by the Poles. However, the Soviet divisions could not quickly make large transitions, and the enemy managed to go deep into the rear of the 3rd Army to Lida. Under these conditions, on the evening of September 25, Tukhachesky ordered the 3rd army to withdraw to Lida, and the troops of the 15th and 16th armies to the river. Ball.

On the northern flank of the front, the main forces of Lazarevich's army were retreating along the Grodno-Lida highway. The 21st Infantry Division withdrew to the northeast along the Grodno-Radun road, and the main forces of the army (2nd, 5th, 6th and 56th divisions) through Vasilishki. Meanwhile, the Poles were going to take Lida, an important communications center, in order to take the Reds into the encirclement ring. On the 27th, Polish troops launched an offensive against Lida from the north and west - from Radun and along the Grodno road. The 1st division of the legions entered from the east, the 1st Lithuanian-Belarusian division advanced from the north-west of Porechye, the 21st mountain and 22nd volunteer divisions moved from the Grodno region along the Grodno-Lida highway.

The 1st brigade of the Lithuanian-Belarusian division (Vilensky and Minsk regiments) moved from Porechye through Bakshty (near Vasilishki) to the crossings on the Lebeda River in order to capture them before the Red Army men approached. In Vasilishki, the Poles with a surprise attack forced the brigade of the 2nd rifle division to flee. The Minsk regiment went to the crossings on the Lebed. At the same time, the main forces of the Soviet army began to go to the river. Some of the forward units had already crossed the river and made camp on the east side. The Poles, coming out of the Krovavy Bor forest, ran into the Red Felixes who were resting near the village. The Red Army men, who did not set up guards and believed that they were in the deep rear, were easily dispersed. Polish troops reached the village of Lebeda, where the field headquarters of the 3rd Army was located. Lazarevich and his entourage managed to escape. The commander managed to order the 5th division to attack the crossing from the west. After that, the command of the 3rd Army fled to Lida in a roundabout way, having lost contact with the divisions. Since that time, the troops of the army acted independently, having lost contact with the command.

First, the forward battalion of the Minsk regiment was attacked by a brigade of the 6th division from the east and units of the 2nd and 5th divisions from the west. Under the pressure of the Red Army, the Poles retreated into the forest, where they gained a foothold and held out until the arrival of two more battalions of their regiment. After that, the Poles again went on the attack and began a battle for the villages of Felix and Lebeda. Towards evening, the retreating regiments of Soviet divisions again pushed the enemy back into the forest. At 19 o'clock the Vilensky regiment approached. Polish soldiers went on the offensive again and captured the crossings. At 20 o'clock the troops of the 56th rifle division reached the crossings along the highway, and at 21 o'clock several thousand Red Army men in dense columns attacked the enemy in a narrow sector. Despite heavy rifle and machine gun fire, the Russian infantry broke through to the positions of the Polish troops. Night fell and the battle continued in the dark. Indiscriminate shooting, bloody hand-to-hand combat with rifle butts and bayonets. They fought desperately, both sides did not take prisoners. At the same time, units of the 2nd and 6th divisions hit the enemy. The Polish regiments suffered heavy losses and on the night of the 28th retreated into the forest. Our troops occupied the crossings, and by morning the main forces of the 3rd Army had gone towards Lida.

Thus, the Polish troops were unable to stop the Russians on the river. Quinoa. However, the headquarters of the 3rd Army was disorganized and lost contact with the divisions. The troops retreated and fought on their own. The path to Molodechno was cut off, it was necessary to go to Baranovichi. The delay of the divisions of Lazarevich's army in the battle at Bloody Bor made it easier for the Poles to capture Lida and create an obstacle for the Red Army to retreat through Lida. The Red Army and the Poles suffered heavy losses in this battle: hundreds of killed, wounded, captured and missing on both sides. 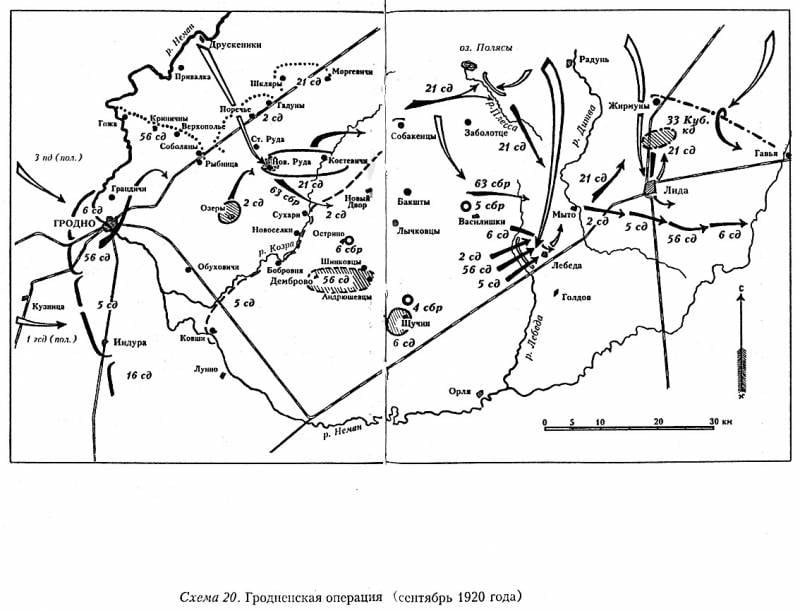 The Polish command set the task of quickly capturing Lida. This made it possible to cut the lines of retreat of the 3rd Red Army. From the north-west, the Lithuanian-Belarusian division was advancing on the city, from the east - the 1st division of legions with the 4th cavalry brigade, from the west were the columns of the 21st mountain and 22nd volunteer divisions. Soviet troops also marched towards Lida, but slowly, with delays.

The first to the city on the morning of September 28, 1920 was the 3rd brigade of the 1st division of the legions of Colonel Dombbernatsky. At 10 o'clock the Poles began a battle for the city. The offensive was carried out from the north. The Reds in the city had a large number, there was the headquarters of the 3rd Army, led by Lazarevich, but they were already discouraged due to previous events. Therefore, the Polish brigade captured Lida quite easily. The Red Army men ran after the army headquarters. The divisions of the army were left to fend for themselves. The regimental and divisional commanders, although poorly organized, attacked the enemy, trying to recapture the city and retreat to the east.

The Polish soldiers did not have time to gain a foothold, as Soviet troops appeared, which lingered in battles on the river. Quinoa. The first to attack Lida was the 5th Infantry Division, which suffered less losses in the battle at Bloody Bor than other divisions. The Red Army were able to carry out a surprise attack, recaptured the barracks, the railway station and broke into the city center. Fierce fighting ensued, in which both sides suffered heavy losses. The Polish batteries fired directly. After lunch, fresh battalions of legionnaires entered the battle. The counterattack of Polish reinforcements mixed the ranks of the Red Army, who were already rejoicing at the imminent victory. Having suffered serious losses, the 5th division retreated from Lida and began to withdraw south of the city. The advance brigade of the 5th Infantry Division, which was approaching from the west, also moved behind the units of the 56th division. Near the city, the Soviet brigade was ambushed and defeated by the Poles. At the same time, the Polish cavalry, bypassing the city from the east, attacked and defeated the units of the 6th Soviet division near the village of Dubrovna.

Late in the evening of September 28, units of the 21st Infantry Division reached the city. At about 22 o'clock, the Soviet infantry, with the support of artillery, launched a new assault on Lida. The fight was fierce, it came to hand-to-hand combat. At first, the Reds moved forward, occupied the barracks, but then the Poles launched a counterattack and threw the enemy back. The Soviet division, which had suffered more losses in the previous battles at Bloody Bor, retreated into the woodlands west of the city. By nightfall, the remnants of the Reds were driven out of the city. By the morning of the 29th the battle was over. The personnel of the 21st Infantry Division were angered by losses, setbacks and grueling marches. Ammunition and food supplies were running out. As a result, the soldiers mutinied, arrested the commissars who called for the battle to continue, and surrendered. On September 29, the Polish cavalry continued to pursue the enemy east of Lida, taking prisoners hundreds of Red Army men, several guns and dozens of machine guns.

Thus, Polish troops were able to keep Lida and defeat the enemy. However, the Polish divisions were unable to reach the city in time. In the battle for Lida, only the 1st division of legionnaires and a cavalry brigade took part. The rest of the units did not have time to approach Lida during the battle. The Polish troops in this sector were significantly inferior to the Reds in number. If the Soviet command had organized the attack of the 3rd Army divisions well, the enemy would have been defeated. Due to the mistakes of the Soviet command, the troops of the 3rd Army had to cede the city and change the route of retreat, opening the way for the enemy to the rear of the 15th and 16th armies of the Western Front. The divisions of the 3rd Army nearly hit the "cauldron". But some of the troops were captured (up to 10 thousand people). Polish soldiers seized dozens of guns and machine guns, army property.

This was a serious defeat for the Western Front under the command of Tukhachevsky. After the loss of Grodno and Lida, the northern wing of the Soviet front virtually disappeared. The 3rd Army narrowly escaped encirclement and complete destruction, for a while it lost its combat effectiveness. There was a threat of encirclement of the divisions of the 15th and 16th armies. Our troops continued to retreat to the east, while the Polish army developed an offensive.

Battle of Rostov
The disaster of white Odessa
How Slashchev Crimea defended
Dono-Manych battle
The death of the Northern Army Miller
Why Western agent Kolchak is turned into a hero and martyr of Russia
The defeat of the army of Denikin in the battle of Tikhorets
How did the Ice Siberian campaign end
The fall of the White Kuban
Agony of White Novorossiysk
The death of the Kuban army
Denikin's resignation
Far Eastern Republic and the Japanese threat
Polish "liberation" campaign in Kiev
Baku “Blitzkrieg” of the Red Army
The battle for Belarus. May operation of the Red Army
War of the Russian Army Wrangel
The first victories of the Wrangel army
The defeat of the 13th Soviet Army in Northern Tavria
Our Kiev!
The battle for Rivne. How Budyonnovtsy smashed the Polish defense
Minsk is ours! The defeat of the Polish army in Belarus
Battle for Lviv. The failure of the Red Army in Galicia
The death of the cavalry group Rednecks
The fierce battle for the Kakhovsky bridgehead
The defeat of the landing group Ulagaya
"Miracle on the Vistula"
How Tukhachevsky destroyed his armies on the Vistula
Battle of Komarov. Defeat of the 1st Cavalry Army
Bukhara Blitzkrieg Frunze
"The danger of Wrangel is becoming enormous ..."
Battle on the Lower Dnieper
The last offensive of the Russian army
Battle of the Neman
Defeat of Tukhachevsky on the Neman

Ctrl Enter
Noticed oshЫbku Highlight text and press. Ctrl + Enter
We are
My grandfather's front-line letters (part 2)Myths of the Great Patriotic. Papier mache helmet
44 comments
Information
Dear reader, to leave comments on the publication, you must to register.