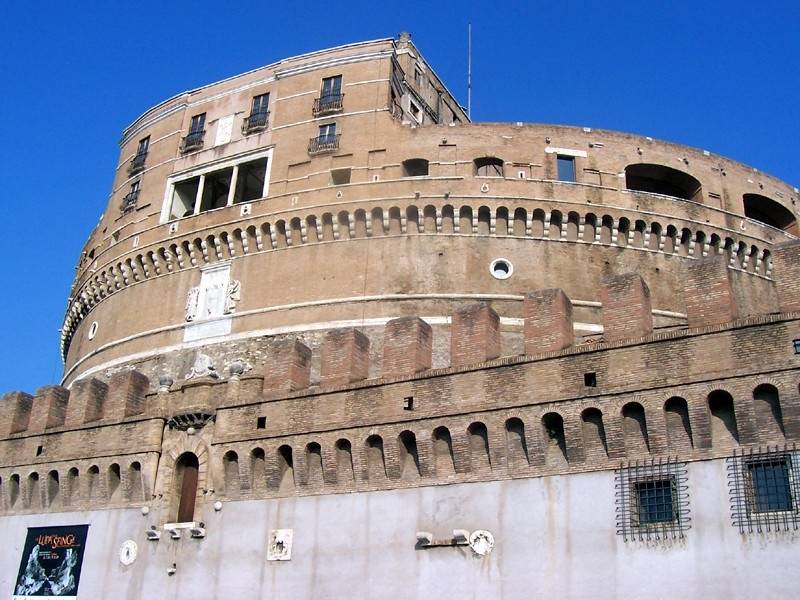 It is difficult to say from what distance the Castel Sant'Angelo in Rome makes the strongest impression. Both near and from afar, its round tower literally hangs over the surrounding buildings.

... because this fortress was inconvenient for a siege ...
Second Book of Maccabees 12: 21

Castles and fortresses. For a long time we had nothing about locks on VO. And this is a very serious omission on my part, because people find it interesting to read about locks. And although it will still not be possible to tell about all the preserved castles, for some of them it is simply necessary. And this is especially true of the Castel Sant'Angelo in Rome, which, in fact, became a model for castle builders in Europe, and initially it was not a castle. This is such an amazing building, and today we will tell you about it. 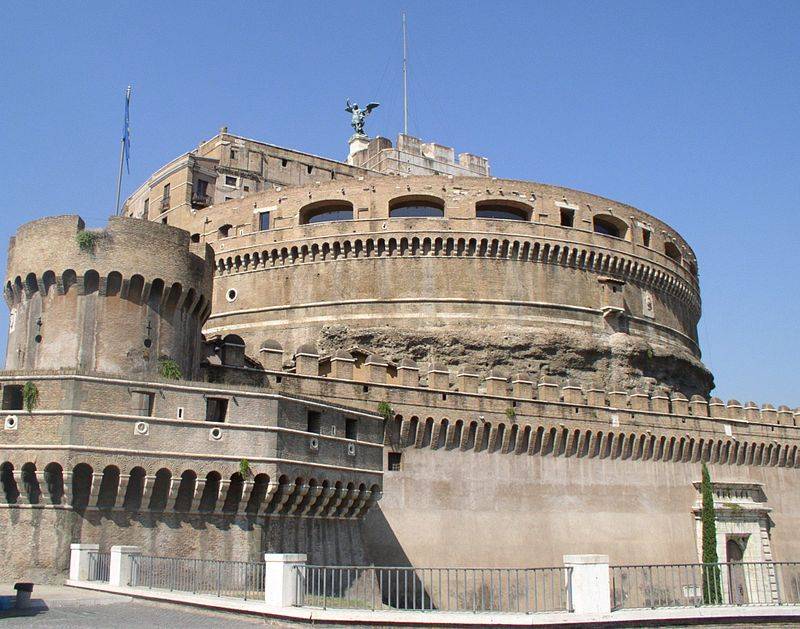 The bronze archangel Michael crowns the castle. It was in his honor that he got his name.
We should start with its not quite unusual name. After all, initially it was not a castle, but a luxurious mausoleum for the Roman emperors. Then it was turned into a fortified refuge for the popes, a treasury of their wealth, a prison where both political criminals and religious heretics and even the artist Benvenuto Cellini were kept. In addition, many stories and amazing legends are associated with it. And even Dan Brown chose Castel Sant'Angelo as a haven for the evil Illuminati. 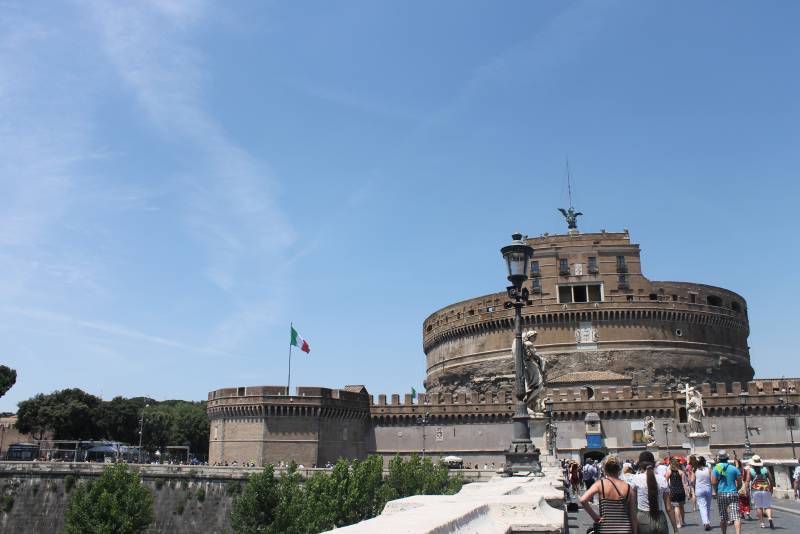 We go to the castle over the bridge over the Tiber
It is not difficult to get to it if you find yourself in Rome. It is built on the right bank of the Tiber River at a distance of a kilometer from St. Peter's Basilica and the Vatican. 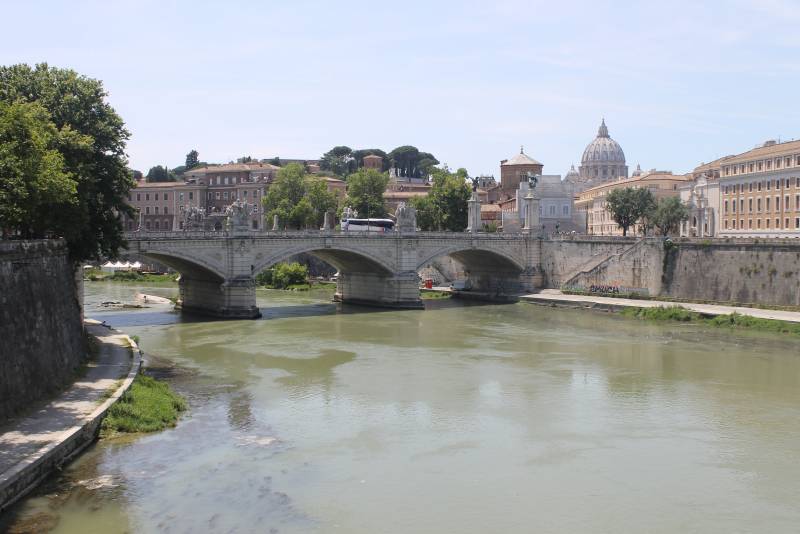 The Tiber in Rome is a shallow and muddy river ... Especially in summer!
From the left bank, where such iconic structures as the Colosseum, the Roman Forum and the Pantheon are located, there is a pedestrian bridge to the Castel Sant'Angelo, which is decorated with figures of angels. The castle itself is surrounded by the Hadrian Park with a characteristic "star" shape that follows the outer contour of this castle. It is interesting that in wintertime the Romans go ice skating here and admire the castle at the same time. However, in the Roman summer heat, it will take some imagination to imagine this! 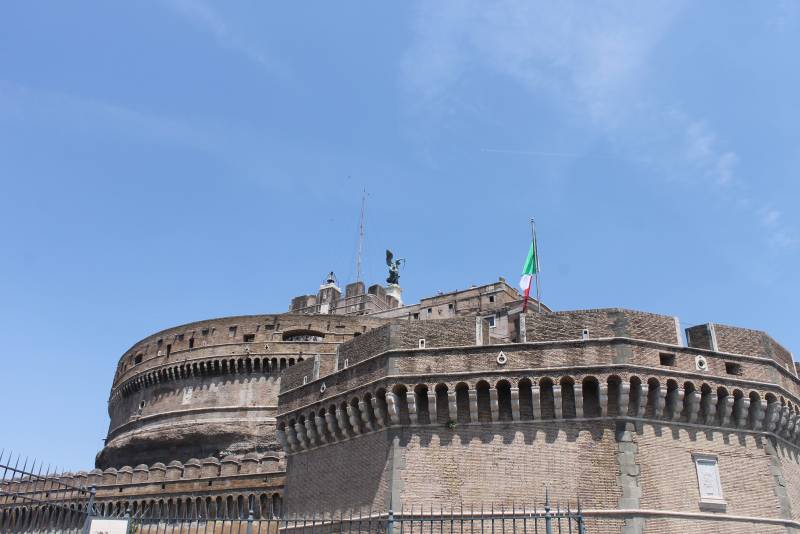 The very central tower of the castle is surrounded by four later bastions, on which the cannons were placed
The most interesting thing is that the Castel Sant'Angelo had nothing to do with the angels from the very beginning, and there were no popes when it was built. And it is not surprising: after all, it was built in the II century A.D. as a luxurious tomb of the Emperor Hadrian, as well as members of his family and all his subsequent successors. In the years 139-217. AD the remains of a number of emperors were buried in this mausoleum, the last among whom was the emperor Caracalla. 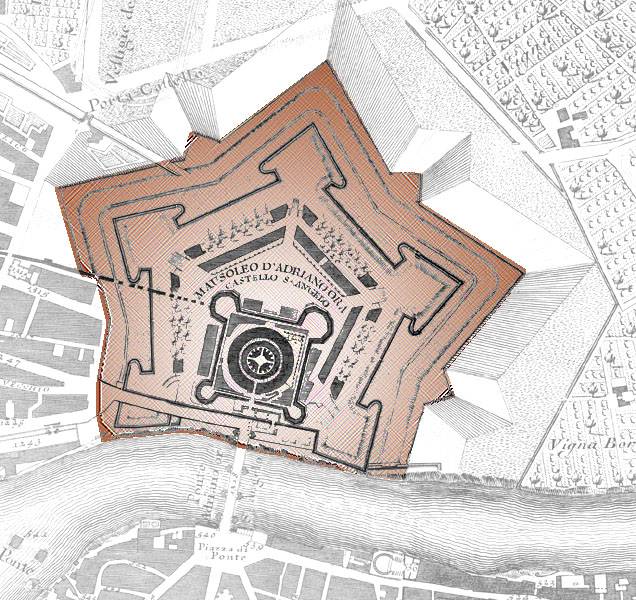 General plan of the Castel Sant'Angelo and the surrounding area
Emperor Hadrian spent a significant part of his life on campaigns, traveled all over the empire, but he rarely visited Rome itself. Therefore, it was here that he wanted to build something grand, and, of course, associated with his name. This is how the mausoleum of Hadrian was born, decorated with statues of people and animals, with a beautiful garden with a square base, where two colonnades with columns of different heights were erected. At the top of the mausoleum stood a statue of the emperor Hadrian, represented as the sun god Helios, standing on a golden quadriga chariot, that is, a chariot drawn by four horses. 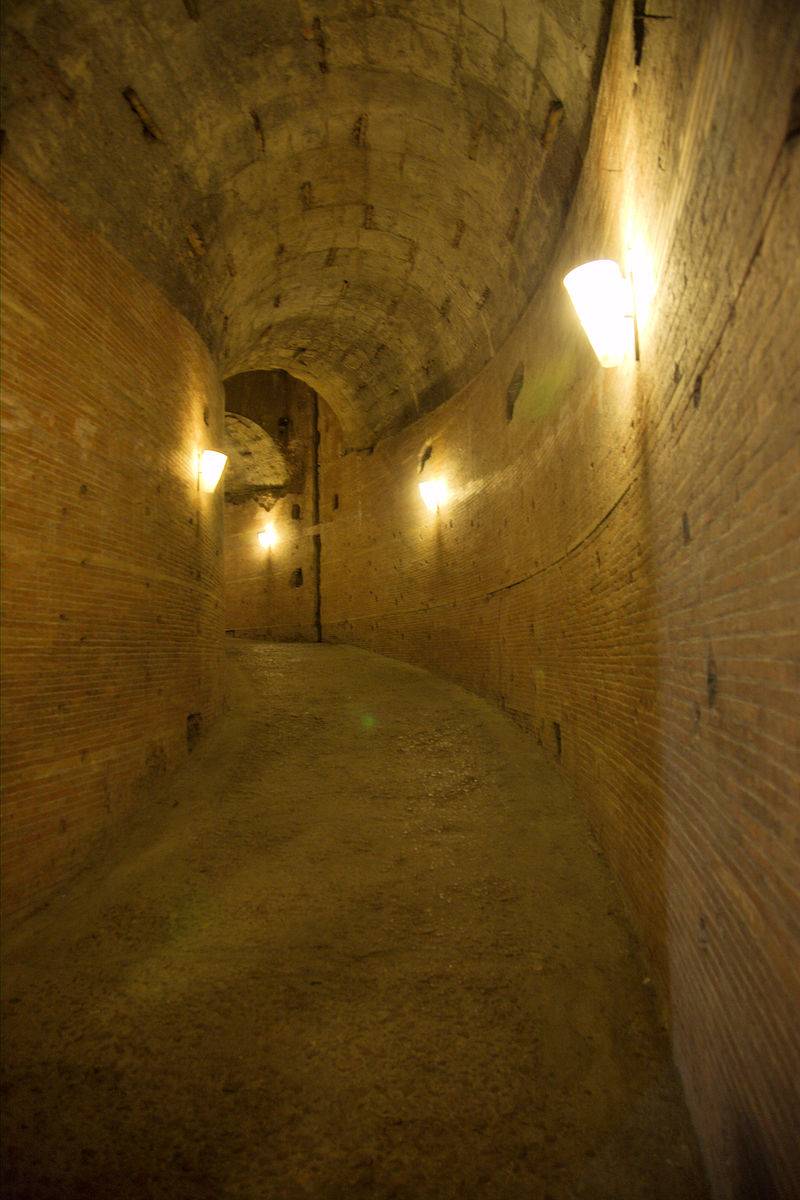 Underground galleries of the castle
The first mausoleum in Rome was built for the Emperor Octavian Augustus. Hadrian's mausoleum was the second, but it became the tallest building in the city at the time of construction. And then dry pragmatism began ... 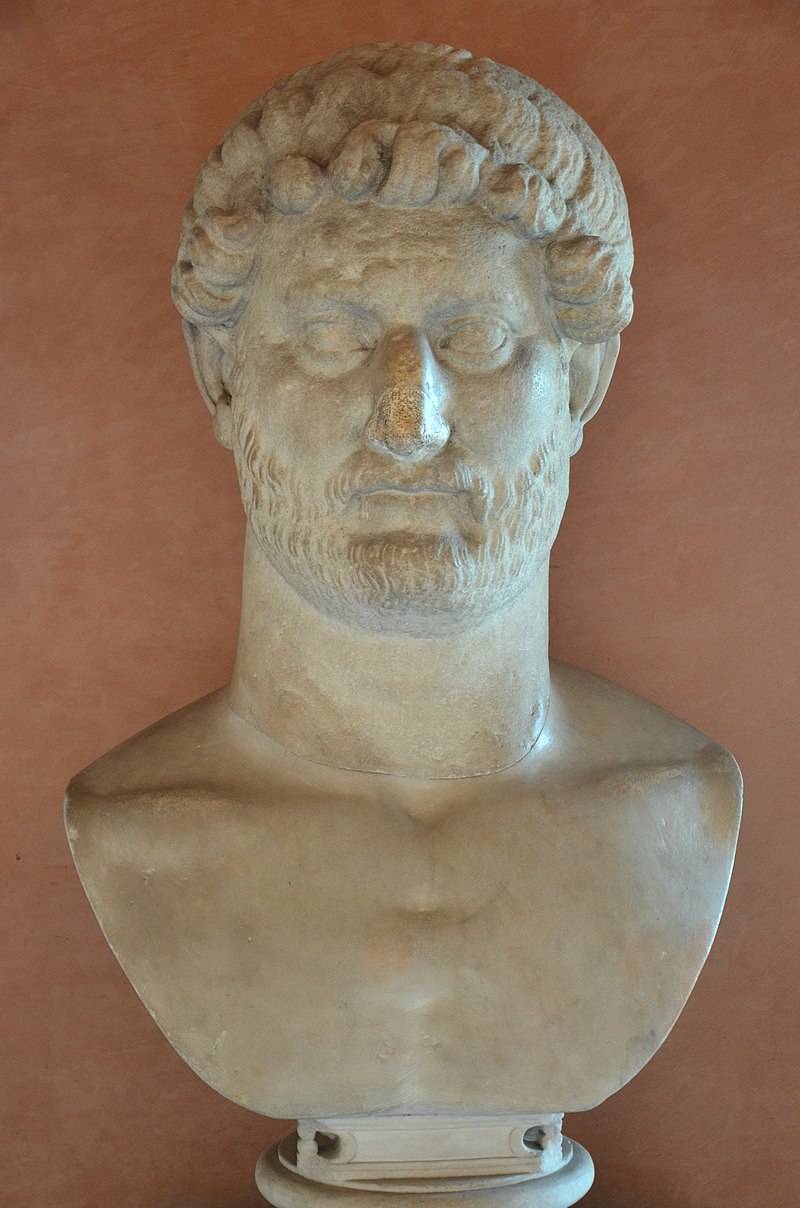 Marble bust of Emperor Hadrian from Hadrian's mausoleum. Castel Sant'Angelo National Museum, Rome
In 270 A.D. the empire and Rome began to be threatened by the Goths. Emperor Marcus Aurelius, who ruled at that time, ordered Rome to be fortified with a second line of walls, and Hadrian's mausoleum was included in this protective perimeter, the size and strength of the walls of which allowed him to play the role of an important fortification. And it should be noted that only thanks to its protective functionality, this pagan, in general, building has survived to this day, and was not dismantled by righteous Christians into stones, as it happened in the case of other ancient buildings. 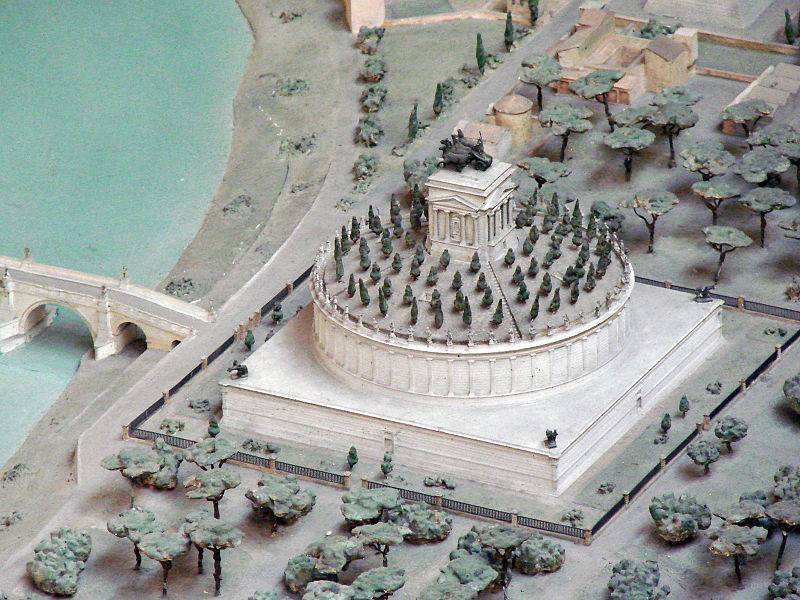 Model of the original view of Hadrian's mausoleum. Castel Sant'Angelo National Museum, Rome
True, the mausoleum of Hadrian nevertheless lost its external splendor: it lost both statues and decor, that is, everything that adorned it under the emperors. In the Middle Ages, the mausoleum became a fortress, so it lost all architectural excesses.

And it turned out that today the castle of St. Angel is most like a layer cake! At the base is the foundation of Hadrian's mausoleum, but everything above it is the later additions and additions of various popes who used this structure as their spare residence in case of various disasters. 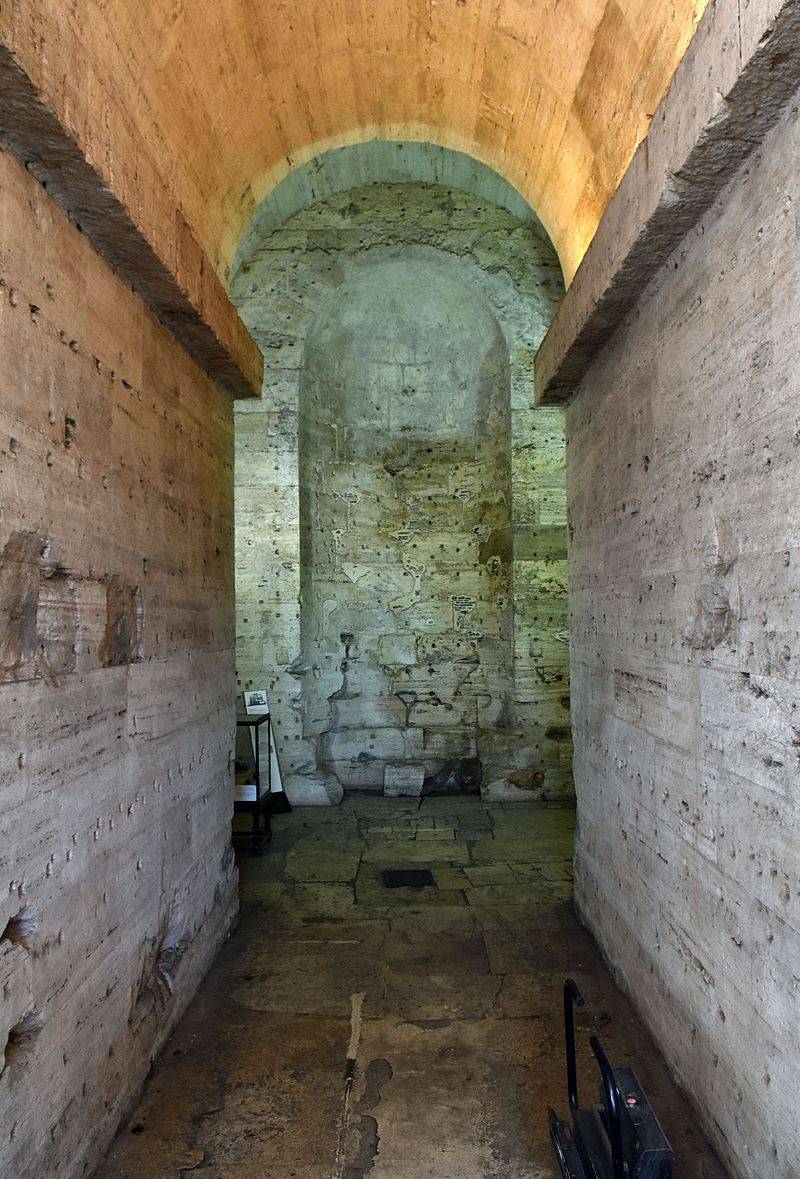 It's good to hide in the dungeons of the castle from the unbearable Roman heat
Interestingly, the very Christian name of the castle is associated with the plague epidemic in 590. Then in Rome many people died from her, no one knew when this scourge would end. But here the Archangel Michael appeared to Pope Gregory the Great in a dream, and not just anywhere, but in the imperial mausoleum. He sheathed his sword, and it was considered a happy omen - a sign that the epidemic would soon end! It is clear that this is what happened. 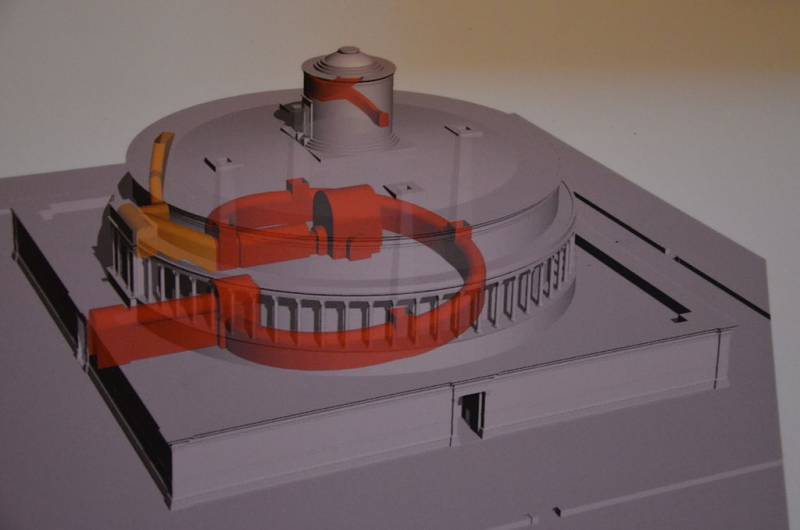 The original structure of the Hadrian's mausoleum. Castel Sant'Angelo National Museum, Rome
For the miracle sent down by the archangel, they thanked him: they renamed the castle, and put a wooden statue of it on top of it. Then it was changed several times. Today the figure of the archangel over the castle is bronze. 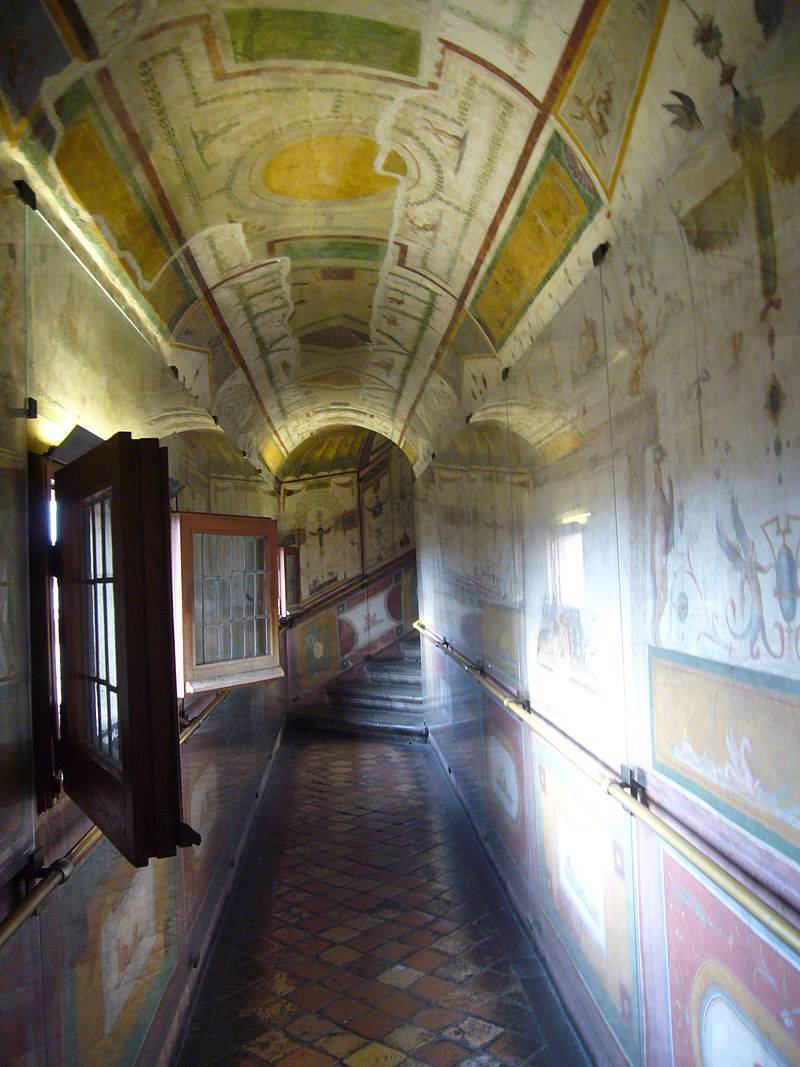 Corridor leading to the library
In the Middle Ages, circumstances forced the popes to use Castel Sant'Angelo as a refuge. And Pope Nicholas III in 1277 ordered the construction of Passeto - a special passage along the high fortress wall 800 meters long, connecting the Vatican with the castle. Now the dads could use it to quickly go to the castle and escape there, if not for good, then for a while. And this move really came in handy for the dads. So, Pope Alexander VI used it to escape when the troops of King Charles VIII of France attacked Rome in 1494. 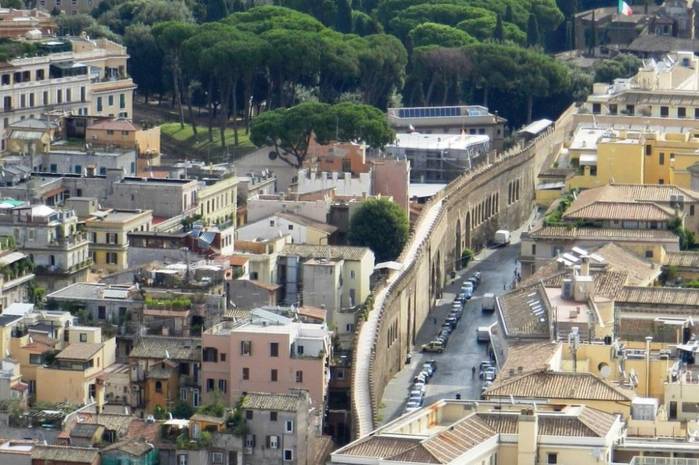 Here it is, Passetto, - the entrance to the castle along the wall above the city!
And the most famous case, when this passage and the castle really saved the life of the pope, is connected with the siege of Rome by the troops of Emperor Charles V in 1527, after which the city was taken and brutally plundered. Then Pope Clement VII managed to escape from the Vatican precisely along the Passetto and wait out the "invasion" outside its walls. But almost all of his Swiss guards from the personal guard then died defending St. Peter's Cathedral, and the population of Rome decreased from 55 to 000 people. By the way, along the same wall, prisoners were taken from the castle prison to the Vatican for interrogation and trial. 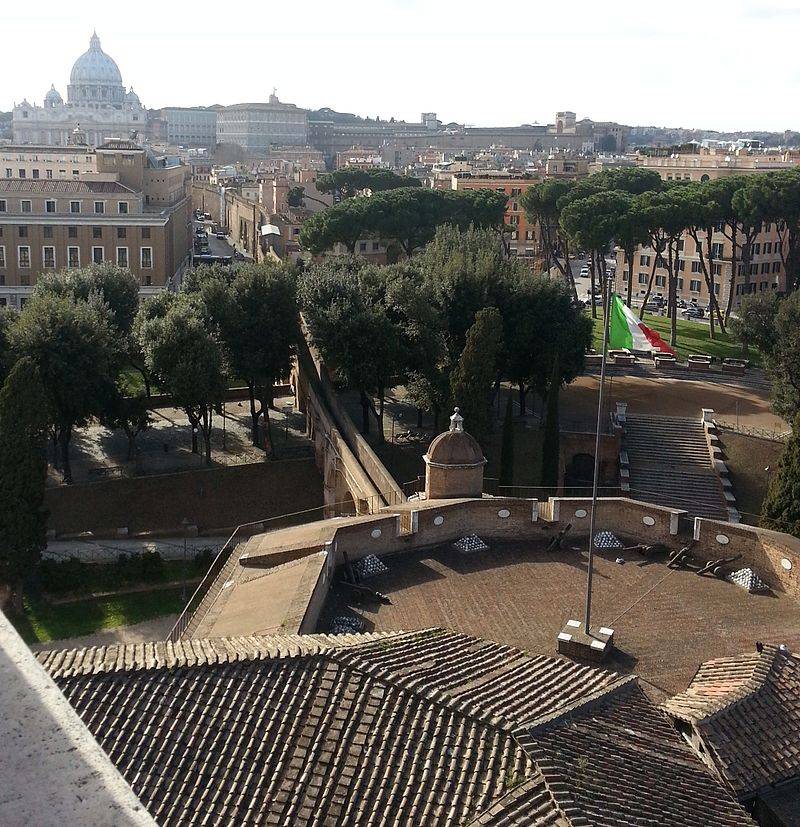 Passetto approaches the Bastion of San Marco
Gradually, the appearance of the Castle of St. Angela approached what we know today. At the same time, in the course of numerous reconstructions, its foundation was expanded, battlements and artillery bastions were added, a ditch was dug around, and a gate equipped with a drawbridge was built. 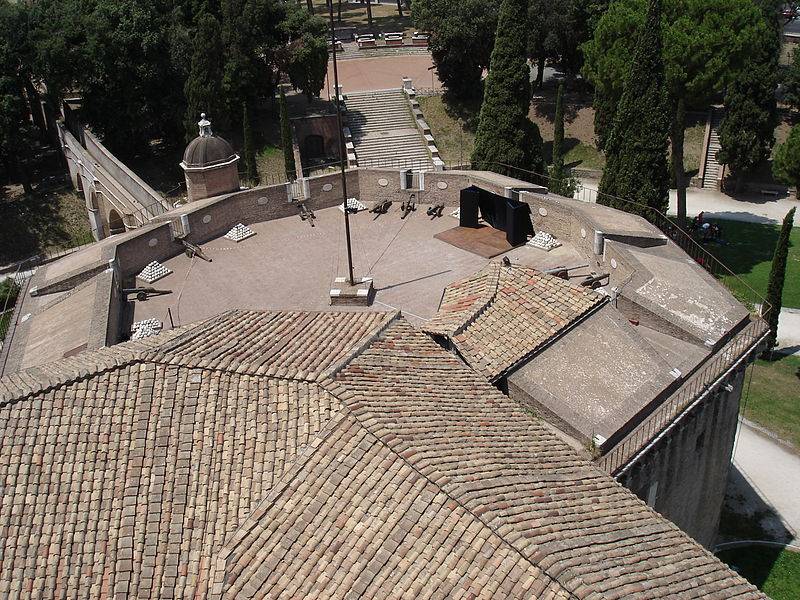 Bastion of San Marco, as you can see, was well supplied with artillery and a supply of stone cores! 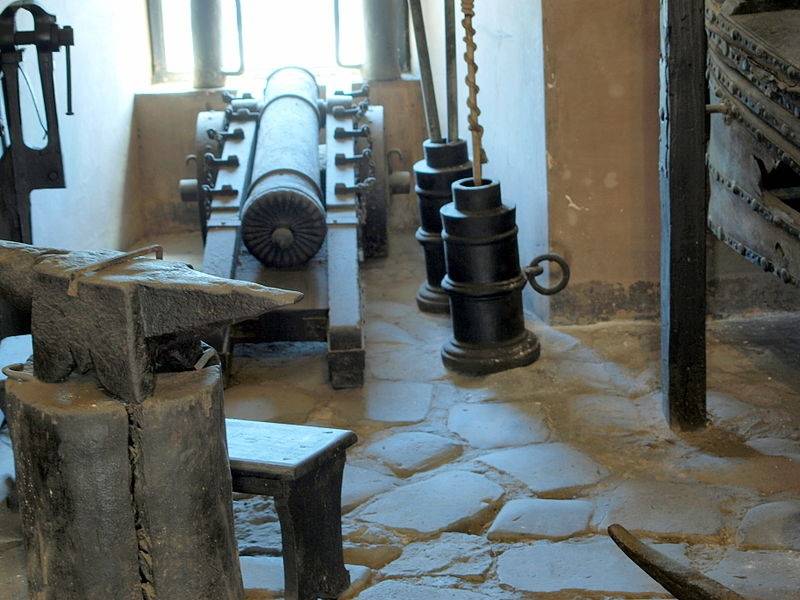 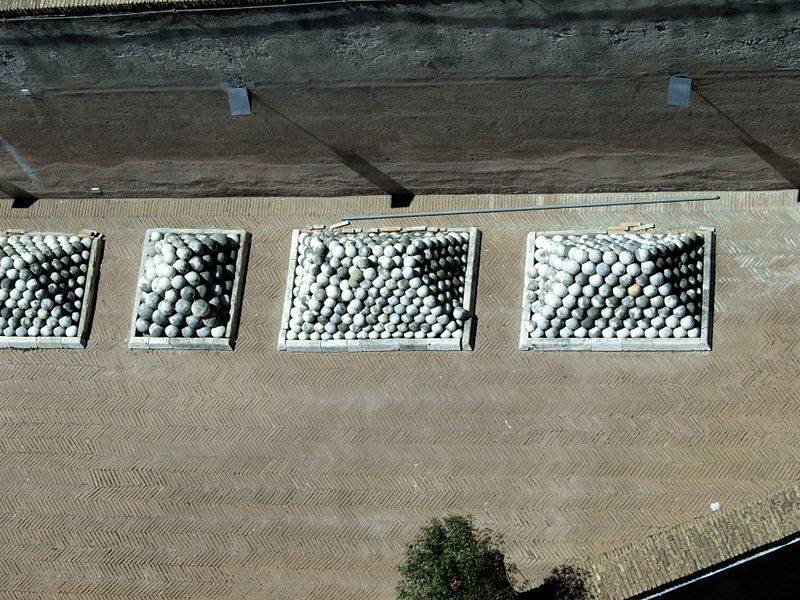 The pyramids of stone cores to the tools are also impressive. This is how much stone had to be delivered and how much work did the stonemasons have to hew out so many such kernels ?!
Inside the castle, the coats of arms of the popes are visible everywhere, so it would not be an exaggeration to say that all история papacy is represented on its walls. There are Medici pills, Farnese lilies, Barberini bees, and a red bull of the Borgia family. And every Pope tried to have a hand in not only strengthening this castle, but also adapting it to the existing fashion. But someone, of course, did more than others. Among them was Pope Paul III Farnese, who invited the most talented Italian masters to decorate the interiors of the castle, who painted its premises with exquisite frescoes and decorated them with sculptures, paintings and marble columns. 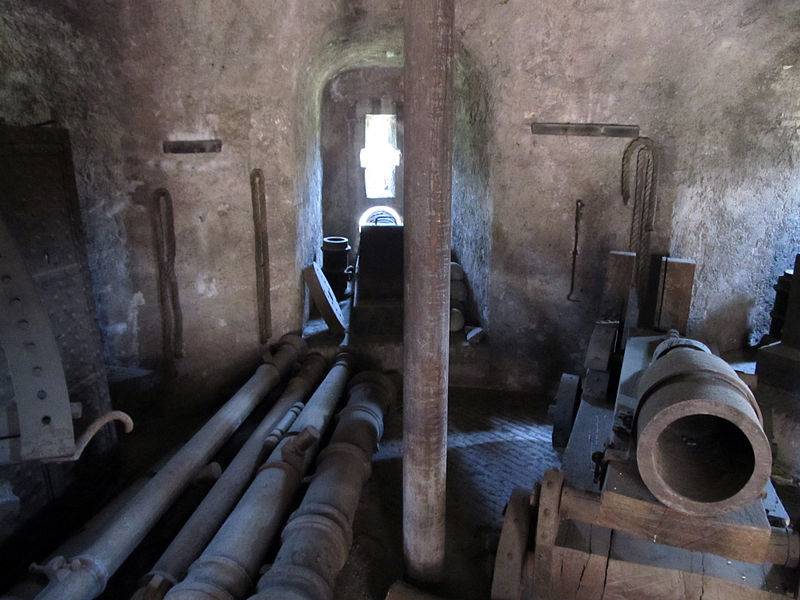 Another artillery casemate ... Pope Boniface IX (1389-1404) took care of equipping the castle with the latest technology
Such an inaccessible structure in the very center of Rome for secret meetings, and besides, it was also so richly decorated, of course, could not but be used for all sorts of secret meetings and not too advertised "events". In particular, it is believed that the most dissolute Roman Pope Alexander VI Borgia in the Castle of the Holy Angel met with his many mistresses and arranged orgies. But who knows if all this was really so, because human rumor simply loves to exaggerate, especially in relation to those whom she identified as the scapegoats. 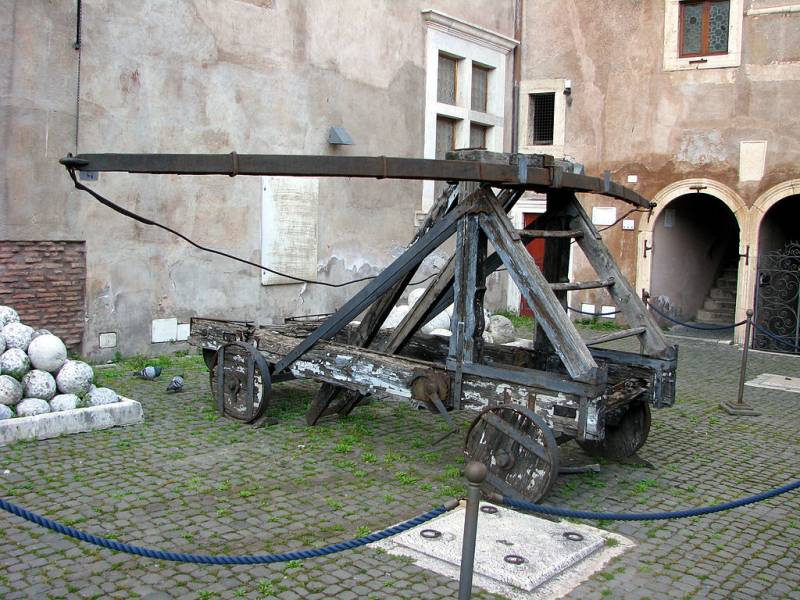 By the way, in the courtyard of the castle you can also see a replica of this strange throwing machine.
The Castle of St. Angela became famous for the fact that it served as a prison for persons disliked by the popes. There were chambers and torture rooms. Moreover, very, very remarkable personalities languished in prison here: the famous sculptor, painter and to a large extent adventurer Benvenuto Cellini, the heretic Giordano Bruno and ... Count Cagliostro. Some popes were also able to be prisoners in this castle. It is not without reason that it is said that no one should excuse himself from the bag and from the prison. And even dads ... 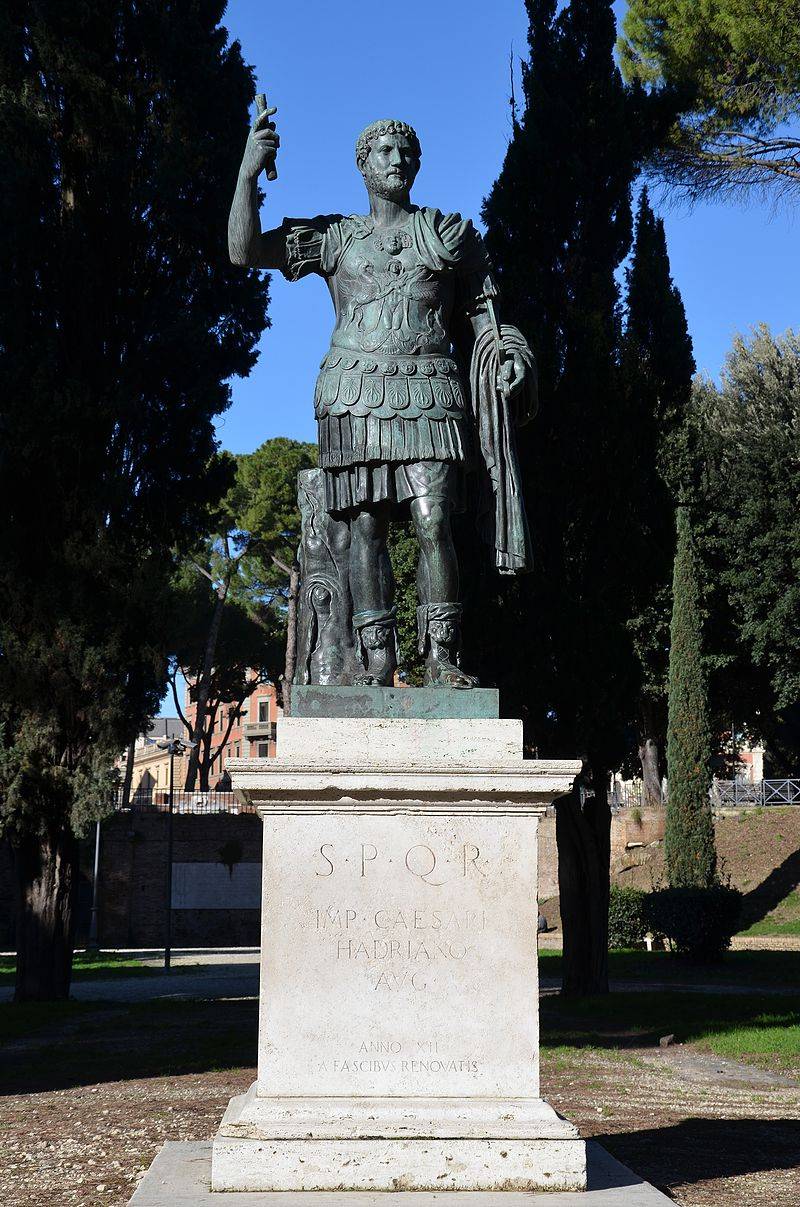 Bronze statue of Emperor Hadrian in the park near the castle
The prison in the castle was closed only in 1901: that is how much the society demanded for its gloomy inaccessibility.

Author:
Vyacheslav Shpakovsky
Articles from this series:
Nice: what impregnable fortresses turn into
The stone fortresses of ancient Iberians: a chronology of historical drama
Castles and ancient settlements of Lloret
Chinon: castle of one of the wonders of the Orleans virgin
Chinon Graffiti - The Key to the Templar Gold

Ctrl Enter
Noticed oshЫbku Highlight text and press. Ctrl + Enter
We are
Chernobyl notebook. Part of 3Father told
157 comments
Information
Dear reader, to leave comments on the publication, you must to register.