August 10 2012
65
In the course of the current state program of re-equipment of the Russian army, not only military equipment is created and supplied. Not forgotten weapons of various types. On Wednesday it became known that in the coming months, the Air Force will receive a new long-range cruise missile. 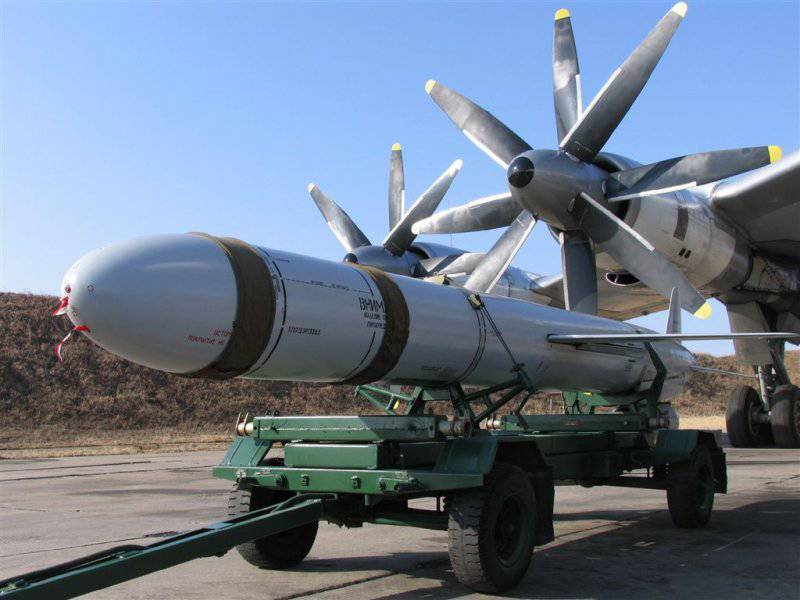 According to Interfax, the presence of such plans was told by Deputy Defense Minister A. Sukhorukov. It is alleged that recently there were two test launches that were deemed successful. There are two more test launches in the plans for August, after which a final decision will be made regarding the adoption of the new missile and the corresponding papers are signed. Unfortunately, Sukhorukov did not announce at least the name of the new rocket, not to mention its characteristics. All available official data is limited to the phrase "strategic long-range cruise missile."

Nevertheless, even from such scanty data some conclusions can be drawn, especially in the light of the previously disclosed information. Currently, the Russian air force has two types of strategic air-launched cruise missiles. This X-55 and its deep modernization called X-555. Various modifications of the X-55 family of missiles have a range from two to three thousand kilometers. All of them are equipped with inertial guidance systems with the correction of the flight trajectory along the relief of the flying ground. The essence of this technique consists in combining standard inertial navigation and comparing a reference relief map with an actually “observed” landscape. This guidance provides very good accuracy of entry and does not require any third-party navigation tools like satellite systems. The means of delivering the X-55 and X-555 missiles to the launch site are the Tu-95MS and Tu-160 strategic bombers.

Since the X-55 family of missiles appeared at the beginning of the 80s, work on the creation of new air-based cruise missiles, which would become the successors of the X-55, was carried out for a long time in our country. First, the specialists of the ICB Raduga, engaged in the program of cruise missiles of air basing, tried to make a hypersonic strategic missile. However, after some failures and the collapse of the USSR, they had to return to the old, but well-established concept of a subsonic cruise missile. In the early nineties, the project started X-101 / 102. To reach the launch range in 5500 kilometers, the designers had to give the rocket a larger size than the X-55. This led to an increase in the starting weight of the 700-800 kilogram. According to reports, the weight of the warhead remained the same - 400-410 kg. Similarly, the situation with the range of missiles X-101 and X-102. Changes to the design, the use of the new engine and the update of the navigation system led to a slight increase in maximum speed. She reached 950-970 kilometers per hour. As for the type of warhead of the new missiles, in the X-101 version it carries a conventional charge, and in the X-102 version - nuclear. The power of a nuclear warhead is estimated at 180-200 kilotons.

The start of testing the X-101/102 rocket was planned back in the late nineties, but the situation in the country forced to adjust these plans. As a result, the development, testing and development of a new rocket dragged on for more than ten years. In 2010, it was reported that the X-101 rocket was brought to mind and has very good prospects. At the same time, equipping the far aviation such missiles will require some innovations. First of all, it is necessary to note the corresponding refinement of the onboard equipment of the missile carriers. In addition, in the case of Tu-95MS aircraft, there is another snag of a constructive nature. The cargo compartment of this bomber cannot accommodate new missiles because of their longer length. That is why in the available photographs of the Tu-95MS, the X-101 missiles were suspended on pylons under the wing, two on each. Thus, each Tu-95MS can simultaneously deliver up to eight missiles to the launch point. In the light of existing international agreements on strategic weapons, such an opportunity looks very, very interesting. The fact is that at present, only six X-95/55 missiles inside the cargo bay can carry Tu-555MS. Under-wing pylons are not used under contracts. It is possible that the adoption of the X-101/102 missile will cause an ambiguous reaction of foreign politicians. As for the Tu-160 aircraft, according to reports, they can easily take the full load of twelve missiles, since the size of the cargo compartment and the capacity of the drum launchers allow this.

The situation with the new rocket at the present time can not be called clear and fully understandable, especially with regard to a specific model. The assumption regarding X-101 / 102 is made in view of the high degree of completeness of the project. In addition, in the spring, Defense Minister A. Serdyukov spoke about a certain new strategic air-launched cruise missile, which had already gone to the troops and increased their combat potential. It is possible that a certain amount of X-101 / 102 has already been sent to long-range aviation for the development of new weapons or trial operation. However, there is no complete official data on this issue yet.

The statements of A. Sukhorukov about the new strategic munition, among other things, are interesting also because he mentioned another project designed for a more distant future. According to the deputy minister, by the end of this year, the first tests of the hypersonic missile program will begin. Other details regarding the hypersonic program Sukhorukov did not announce. Perhaps this project is the development or renewal of X-90, which at one time made a lot of noise. It is not necessary to exclude the possibility that the new project only uses the previously collected information, and it is created almost from scratch. However, the first specific information on a promising hypersonic rocket will appear no earlier than the next winter.