First day of fighting in Karabakh: both sides of the conflict posted footage of clashes 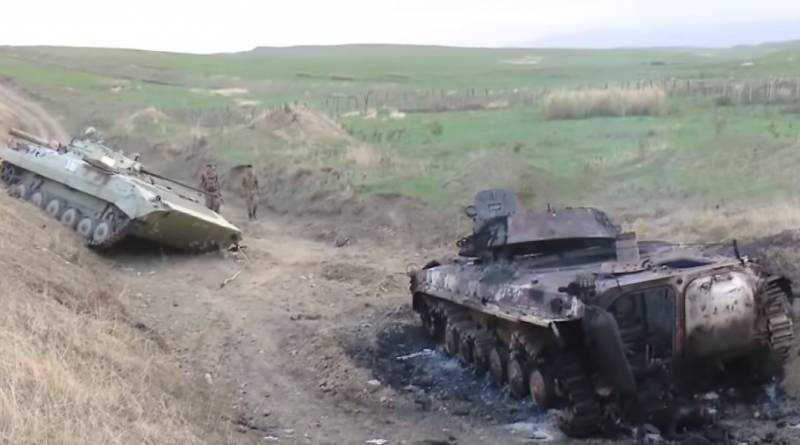 The new aggravation of the Karabakh conflict is accompanied by the demonstration by both sides of a number of photo and video materials. Let's try to accumulate them in this publication to try to reflect the nature and scale of the collisions.

Apparently, the greatest losses at the moment Azerbaijani troops have suffered during the battle among the hills. As can be assumed, after the fall of the Mi-8 helicopter, a convoy of armored vehicles was sent for the rescue operation. Apparently, she was ambushed and destroyed.

Baku publishes a number of videos taken from drones, which indicates their widespread use among the troops. One of them demonstrates the defeat of the enemy's "entrenched" armored vehicles, apparently by ATGM fire: the trail of an anti-tank missile is visible.

It is argued that the Armenian troops could not withstand the offensive onslaught and left their positions, leaving their combat vehicles on the battlefield.

Another UAV video captured the destruction of an ammunition depot in infrared. The strike was allegedly launched from a Bayraktar TB2 drone. UAV data have recently been actively purchased in Turkey.

From the side of Baku, it is declared about effective work on the enemy's anti-aircraft missile systems. Despite entrenching and camouflaging, they become an easy target, being "exposed" by drones. The work of the UAV Bayraktar TB2 on the Osa-AKM air defense system was caught on video.

According to Yerevan, air defense is successfully fighting enemy drones. One of them was allegedly shot down in the Stepanakert area.

However, caution should be exercised when examining losses. According to a number of experts, both sides present the same frames with damaged equipment for their success. The situation with the downed Mi-8 is not completely clear. Although Baku admitted the loss of the rotorcraft, in a number of photos published by Armenian resources, according to some observers, the landing gear of the An-2 aircraft is distinguishable.

In general, the situation may be complicated due to the attraction of more powerful weapons. Thus, it is reported that the Armenian side has deployed the Smerch MLRS into the combat zone.
Ctrl Enter
Noticed oshЫbku Highlight text and press. Ctrl + Enter
We are
Reports from the militia of New Russia for 29 August 2014 of the yearNew war in the Caucasus be?
177 comments
Information
Dear reader, to leave comments on the publication, you must to register.