Will the Pantsiri-SM-SV cover their long-range counterparts S-300V4 and Buk-M3? The situation around the renewal of military air defense 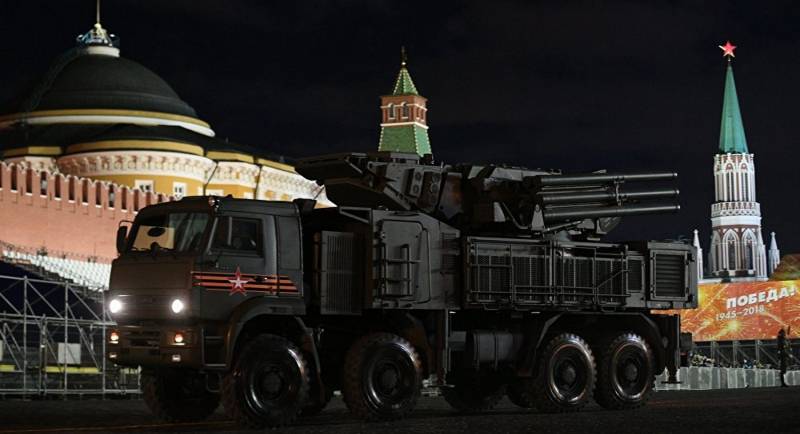 Fresh information about the announcement by the Russian defense department of bringing to the level of operational combat readiness, launching into large-scale production and preparing for deliveries to the combat units of the Air Defense Forces of the RF Ground Forces (air defense) of the deeply modernized Pantsir-SM-SV anti-aircraft missile and artillery systems was met numerous enthusiastic comments of Russian military experts and observers aware of the problems of the formation of all-aspect anti-aircraft / anti-missile barriers over strategically important military-industrial facilities, command and staff infrastructure and units of the RF Ground Forces on the march, covered by self-propelled short-range air defense systems, Tor-M1V "Tor-M2U" and "Tor-M2KM", military medium-range air defense systems of the Buk-M1-2 / 2 family, as well as military anti-aircraft missile systems of the S-300V / V3 family.


Indeed, the retrofitting of anti-aircraft missile divisions, brigades and regiments of military air defense with an improved tracked modification of the Pantsir-SM-SV air defense missile system can be considered the most verified step of the Russian Ministry of Defense, which will mark a fundamentally new stage in the formation of this type of troops and will provide a multiple increase in the level of combat stability of units Ground forces, missile forces and artillery, as well as the safety of the most important administrative facilities and military-industrial agglomerations of our state.

It is expressed in the inability to intercept the enemy's aerospace attack means, the terminal sections of the trajectories of which are distinguished by the activation of the "steep dive" mode at angles of more than 64 degrees in relation to the Tor-M1V / 2U complexes and more than 75 degrees in relation to the anti-aircraft missile systems C -300В1 / 2/3 (we will analyze the situation with the Buk-M1 / 2 family below). In this case, we can talk about both operational-tactical ballistic missiles, warheads (or warheads) of medium-range ballistic missiles and hypersonic cruise missiles diving at the above-mentioned military air defense weapons from the upper layers of the stratosphere, mesosphere and thermosphere, and about 2,5- flywheel anti-radar missiles and supersonic missiles, the massive use of which (with the simultaneous implementation of the "slide" flight mode) makes it possible to "break" a certain number of them into the so-called dead craters above the data of the air defense missile system due to the oversaturation of the throughput and target channel of the radar guidance of the latter.

The use of radio command and semi-active radar guidance principles in these anti-aircraft missile systems completely excludes the possibility of continuing to intercept targets (in the "fire-forget" mode) after the latter go beyond the elevation and / or azimuth sectors of the review of PFAR guidance radars of the "Tor" complexes, as well as parabolic radar "searchlights" for illumination (located on the 9A83 launcher) of the S-300V1-3 systems, receiving target designation from the "Ginger" program review radar. After all, it is well known that anti-aircraft guided missiles 9M331 / D and 9M338K of the Tor-M2U / MKM complexes need continuous radio correction by means of guidance radar up to the destruction of an intercepted object, while the semi-active radar seeker of medium and long-range anti-aircraft missiles 9M83 and 9M82 S-300V1-3 systems require continuous illumination from continuous radar / illumination.

As for the Buk-M2 military air defense missile systems, despite the impressive elevation viewing area (from -5 to +85 degrees) of the 9S36 illumination radars integrated into the electronic equipment of the 9A317 self-propelled firing units (SOU), the probability of successful interception of approaching steep ballistic trajectories of high-precision weapons not as high as it might seem at first glance. After all, target designation to these radars is issued from the 9S18M1-3 "Dome" radar detectors, which have a very mediocre beam elevation angle (no more than 50 degrees).

Conclusion: in the case of autonomous combat alert (without receiving information about the tactical air situation from A-50U AWACS aircraft, VVO 96L6 all-altitude detectors and other radar equipment), the Buk-M2 combat crew may lose sight of the ballistic weapons on the descending branch of the trajectory enemy air attack, which will not allow operators of self-propelled firing installations 9А317 to timely start repelling a massive missile and air strike.

The program for updating combat units of military air defense with unique Pantsir-SM-SV air defense missile systems is designed to neutralize the entire range of the above shortcomings of the Tor-M1 / 2, Buk-M1 / 2 and S-300V1-3 military air defense systems. In particular, the presence in the radio-electronic architecture of the "Pantsirei-SM-SV" guidance system of highly sensitive multispectral optoelectronic sighting systems 10ES1, operating in the medium-wave (wavelength 3-5 microns) and long-wave (8-12 microns) infrared ranges, as well as in the TV range, provides these anti-aircraft missile and cannon systems with the ability to cover almost all elevation sectors that are not visible by the guidance radars of the Tor-M1 / 2 complexes, the Ginger programmed surveillance radar of the S-300V1-3 systems, as well as the 9S18M1 radar detectors -3 "Dome".

The implementation of this opportunity was facilitated by equipping 10ES1 optoelectronic modules with unique guidance drives from the High-Precision Complexes holding, the design features of which provided an elevation viewing area in the range from -5 to +82 degrees, due to which the solution of the dead funnel above the combat module of the Pantsir-C1 air defense missile system / SM-MV "decreased to 16 degrees. It is also worth noting that, within the framework of the Pantsire-C1 modernization program to the Pantsir-S2 modifications (version for the Anti-Aircraft Missile Forces of the Russian Aerospace Forces) and Pantsir-SM-MV (for military air defense), the specialists of the Instrument Engineering Design Bureau them. Academician A.G. Shipunova "equipped the standard 57E6 bicaliber missile interceptors with solid-propellant rocket engines with more energy-efficient fuel charges with a prolonged burnout period, which increased the flight speed of new products from 1300 to 3000 m / s.

Therefore, it is logical to assume that the fire performance of the improved Pantsir-SM-SV can increase from 5 to 10 enemy air targets processed in a 30-second period (in comparison with the combatant Pantsir-C1), which will be an indispensable help not only for military "Bukov-M2" and S-300V1-3 with a semi-active principle of guidance, but also for their promising modifications "Buk-M3" and S-300V4, equipped with anti-aircraft missiles 9М317МА and 9М82МВ with active radar seeker. Indeed, despite the fact that these missiles allow intercepting ballistic air defense systems diving at angles of more than 75-80 degrees, their "dead zones" (the close borders of the intercepted) are 2,5 km (for 9M317MA) and 10-13 km (for 9M82MV) due to impressive weight and size parameters and features of control systems. The "dead zone" of the improved version of the compact and light anti-aircraft missile 57E6 of the Pantsir-SM-SV complex barely reaches 1,2 km, which will allow the combat crews of the updated Tula air defense missile systems to intercept the enemy's high-precision weapons that have broken through literally under the noses of their long-range military counterparts: complexes Buk-M3 and S-300V4.

Ctrl Enter
Noticed oshЫbku Highlight text and press. Ctrl + Enter
We are
The terrible opponent of Torov and the Shell is already at the R&D stage. Possibilities of the advanced Kampluftvern air defense systemThe question of the "three hundredths" for Syria has become even more acute. Sunday's battle near Deir ez-Zor will bring a new strike date closer
55 comments
Information
Dear reader, to leave comments on the publication, you must to register.