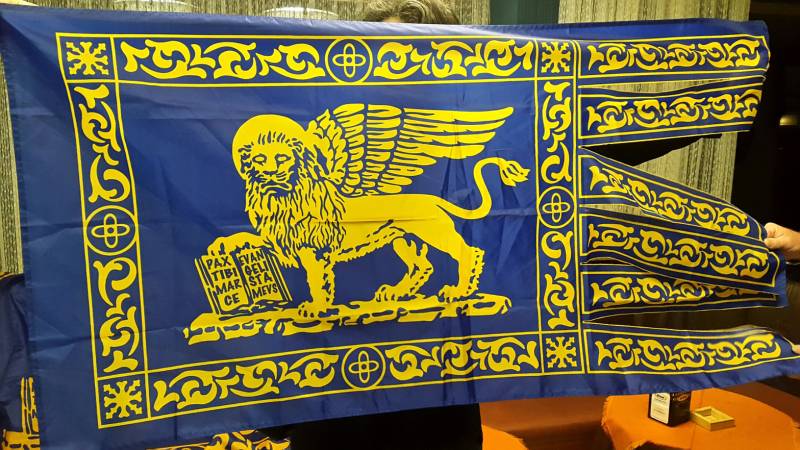 Venetian blue gonfalon with Saint Mark's Lion. It is a symbol of Venice and the former Venetian Republic

Long way to the national flag ... Continue the theme of the appearance of state flags... Today, according to the plan, we have a story about how the Republic of Italy acquired its state flag, and with it its national colors. And the first thing that should be mentioned here is that in the Middle Ages, what kind of flags fluttered over the blessed Italian land! Flags of cities and communes, dukes and earls, noble barons and condottieri adventurers. But they all obeyed one rule: they had to have a hint of support from higher powers. Hence, gold is the color of paradise, blue is the “divine heaven”, red is the color of the militant church, white is the purity and purely “dove-like” innocence, in a word, the entire Christian faith was reflected on the flags of medieval Italy. And all the colors ... 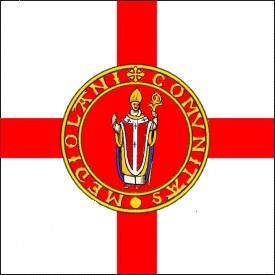 The flag of the so-called Golden Ambrosian Republic is a medieval state formation centered in Milan, which existed from August 14, 1447 to February 27, 1450. It included the lands of modern Lombardy and Piedmont. Named after the patron saint of the city and the Bishop of Milan from 374 to 397, St. Ambrose
But it is clear that some state formations set the tone. And one of them was the County of Savoy. It is known that when on June 20, 1366, Count Amadeus VI of Savoy went on a crusade against the Turks, and Pope Urban V blessed him, a fleet of 17 ships with 2 thousand people on board gathered under his command. And it was then that Amadeus ordered that on the flagship Venetian gallery, along with the traditional banner of Savoy, which was red with a silver cross, a blue flag with the image of the Virgin in a field studded with gold stars should be raised. 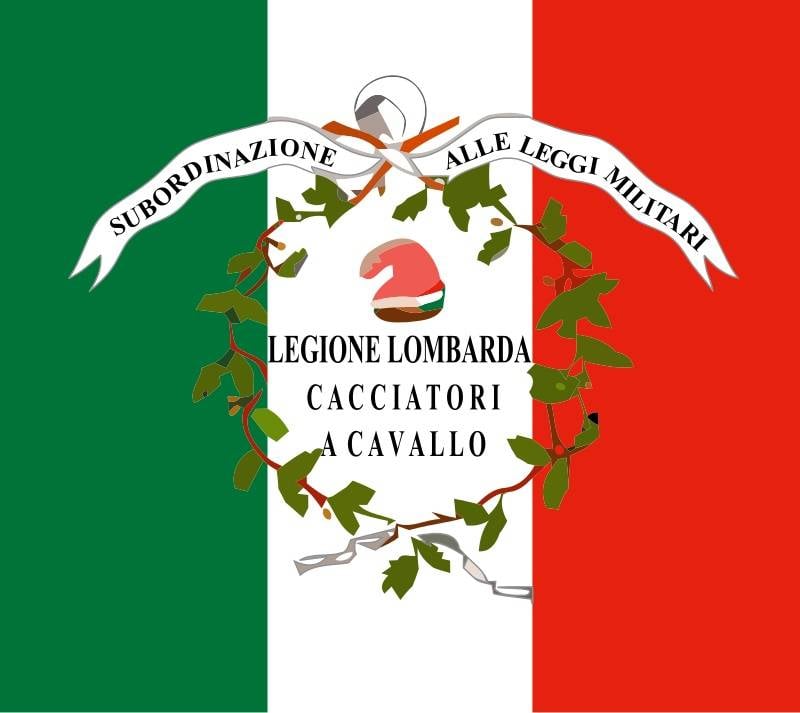 The military flag of the Lombard Legion, which was the first military unit to use the three national colors of Italy we know today in 1796
Why did he need it? Well, what about without the patronage of the Virgin Mary, because blue is her color! Well, the oldest flag of Savoy (1589), known to us from images, is again a cloth of red, white (the color of the coat of arms of the House of Savoy) and blue. By the way, a complete analogue of the colors of the first Russian flag. And who knows what Peter I was guided by at that time far from us: the Dutch or the Savoyans? After all, he read a lot about many flags and saw them abroad, too, in many and very different! 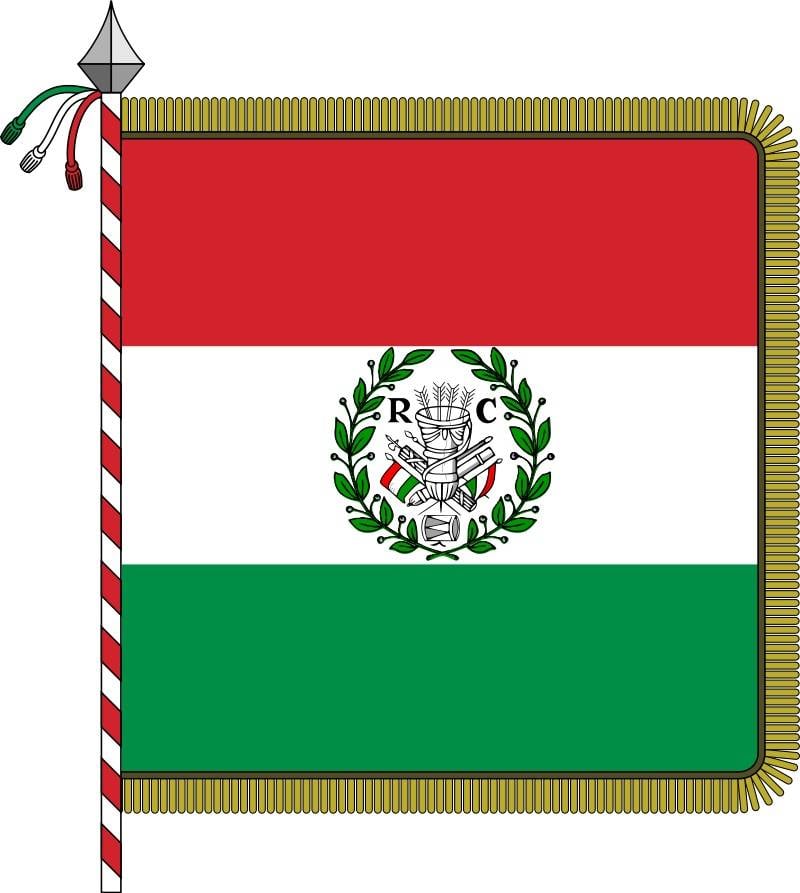 Flag of the Cispadan Republic, established in 1797
Well, where did the Italian tricolor itself come from: green, white and red stripes? The oldest document that mentions the Italian tricolor flag is associated with the arrival of Napoleon Bonaparte on the Italian peninsula. The first territory conquered by Napoleon was Piedmont. And in the historical archive of the Piedmontese municipality of Cherasco, a document was found confirming that on May 13, 1796, on the occasion of the armistice between Napoleon and the Austro-Piedmontese troops, tricolor flags were raised on three towers in the city center. That is, the idea of ​​the Italian flag was borrowed from the national flag of France after Napoleon Bonaparte invaded Italy and began to create republics there on the French model. But his colorist was borrowed from the city of Milan, or rather, from his red and white banner. The green color was also directly related to the city of Milan, since the soldiers of the city's civil guard wore green uniforms, well, how could the military not be a little flattering here? 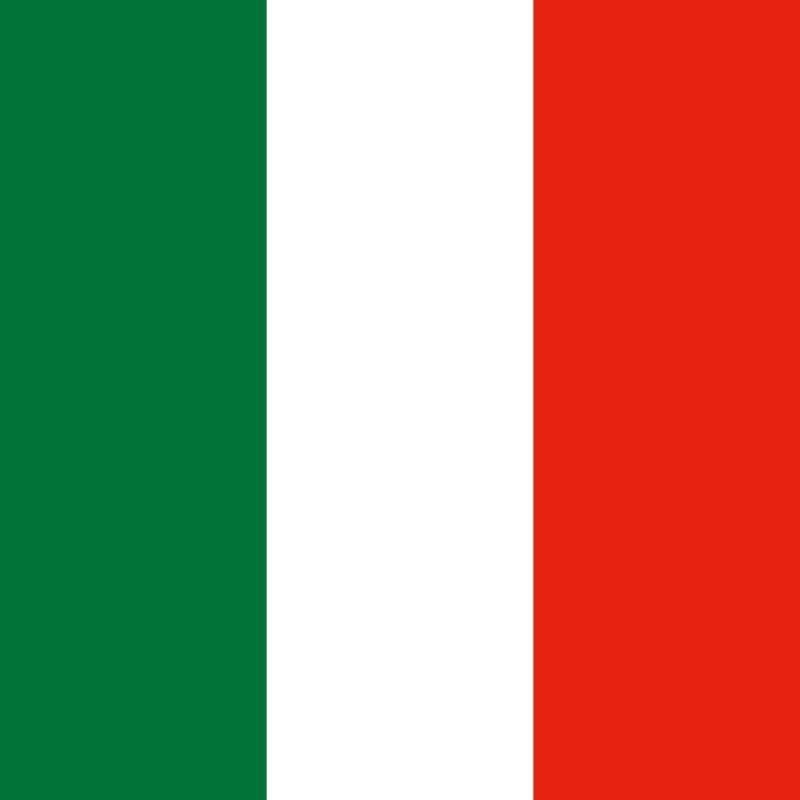 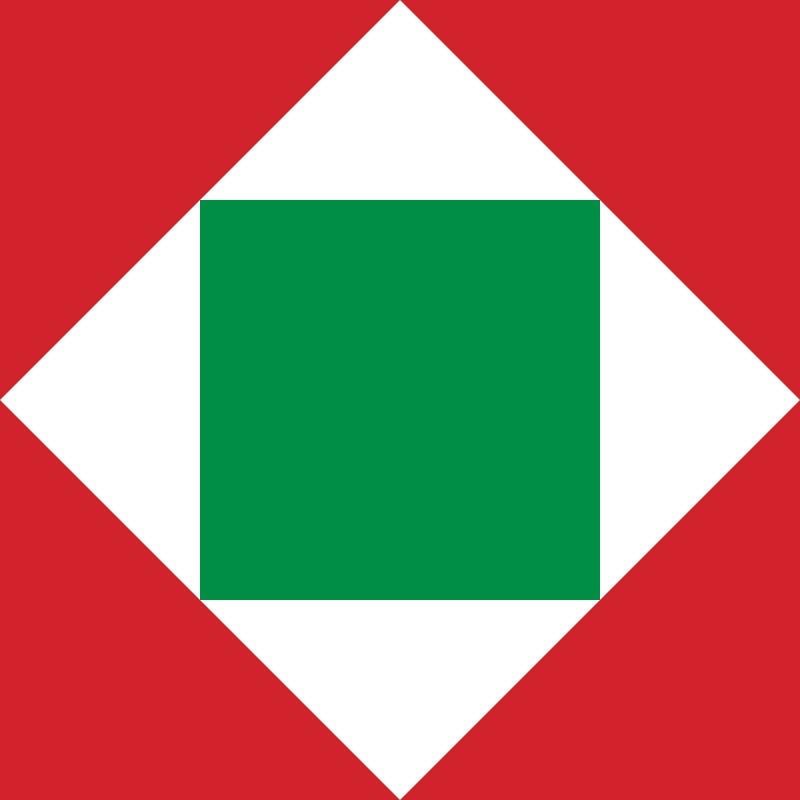 Over time, a legend was born that the creation of the national flag of the country is associated with the names of two students of the University of Bologna: Luigi Zamboni and Giovanni Battista De Rolandis. In the fall of 1794, they organized an armed uprising. And in order to distinguish ours from strangers, they came up with cockades for the colors of the national Italian flag. Their rebellion was suppressed, Luigi Zamboni committed suicide, and Giovanni Battista de Rolandis was executed, but the memory of the students has survived to this day. By the way, Napoleon himself had a hand in the creation of one of the Italian flags, who ordered that an eagle be on the flag. 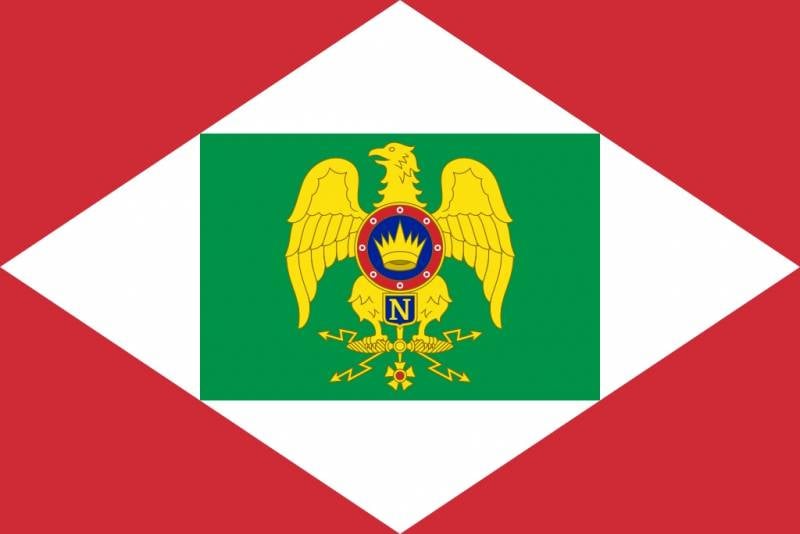 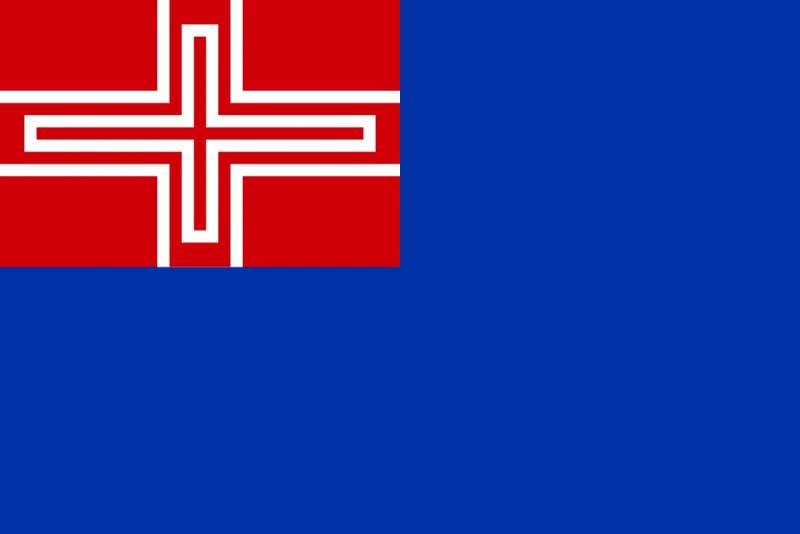 The flag of the Kingdom of Sardinia was the flag of Italy in 1816-1848
The entire first half of the 1861th century in Italy was held under the slogan of Risorgimento, that is, the movement for the unification of the country into a national state and the expulsion of the Austrians. In XNUMX the Risorgimento was crowned with success and the Kingdom of Italy was formed. The Sardinian constitution became the Italian constitution, but the Sardinian kingdom simply ceased to exist. 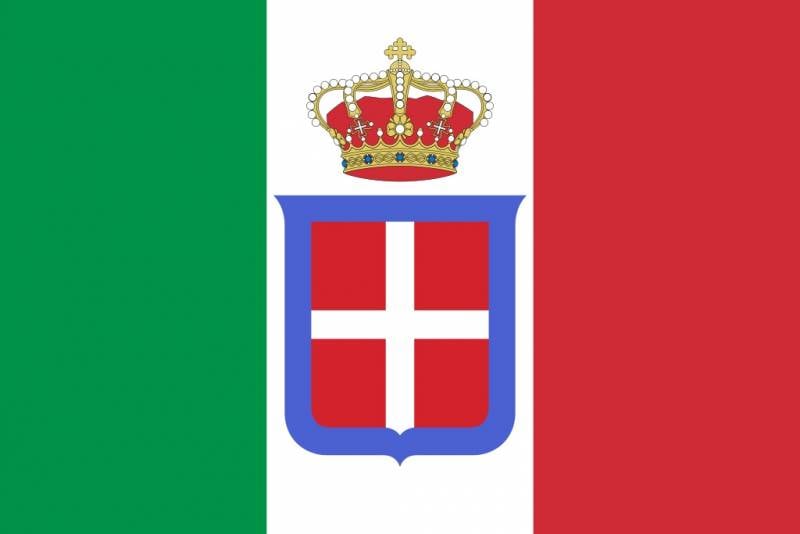 The state flag of the Kingdom of Italy since 1925 has acquired a crown
The new state needed a new flag. This was the tricolor coat of arms of the Savoy dynasty in the middle of the white field. Moreover, the coat of arms was surrounded by a blue border so that the white cross does not merge with the white background. So Italy got the following colors that can be considered national: green, white, red, blue. And the latter is not just "blue", but "Savoyard blue", which is a shade of blue between the lighter color of the first and the darker "peacock blue". It was named after the color of the House of Savoy, the royal dynasty that ruled Italy from 1861-1946. This color is also called "Italian blue". We see this color on the standard of the President of the Italian Republic, the same color on the ceremonial scarves of the officers of the Italian army and heads of the Italian provinces during official ceremonies. The uniform of Italian athletes and national teams is also blue. The same uniform is worn by the Italian national football team, which the Italians call for this - "Squadra Azzurra" ("blue team") and which first entered the field in blue on January 6, 1911, when they played in Milan with the Hungarian team. 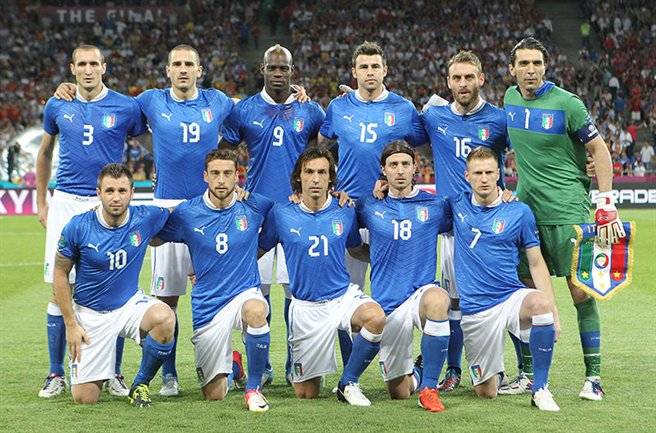 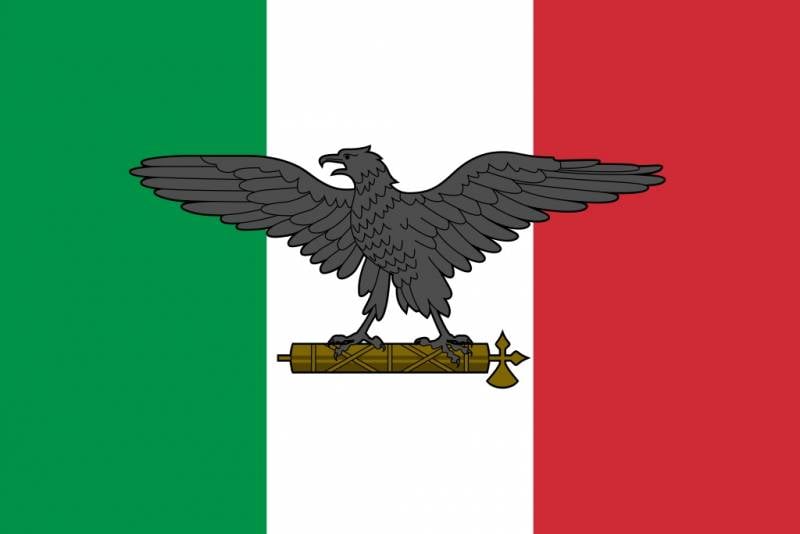 Flag of the Republic of Salo
The national colors of the Italian tricolor were preserved during the Second World War. But there, on the flag of the so-called Italian Social Republic (the second name is the Republic of Salo; the republic was a puppet state in the territories of northern and partly central Italy occupied by Germany), which existed in the country in 1943-1945, an eagle "took off" with its wings spread, sitting on the lictor fascia. 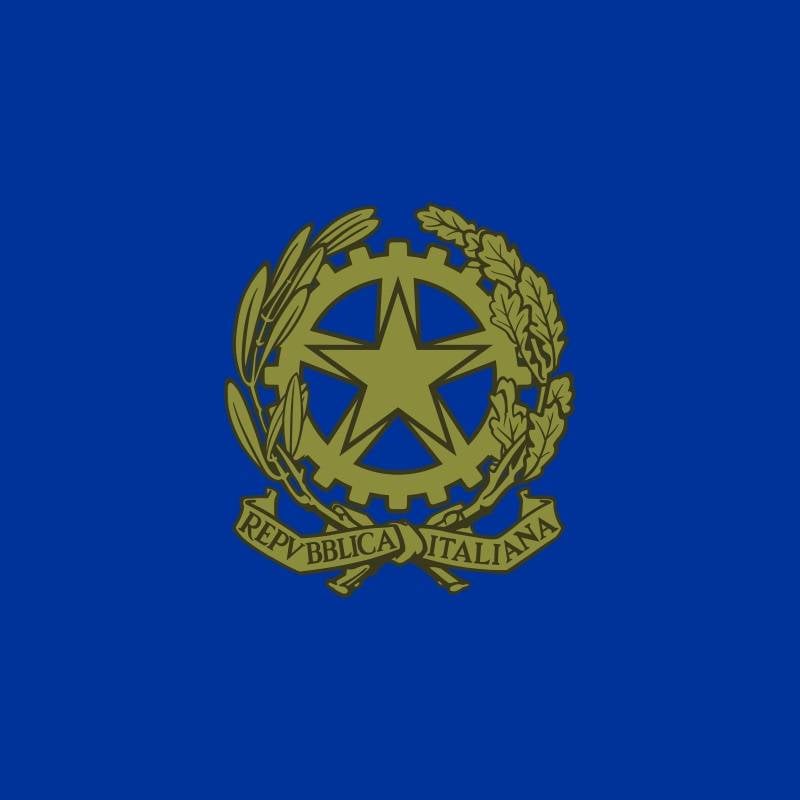 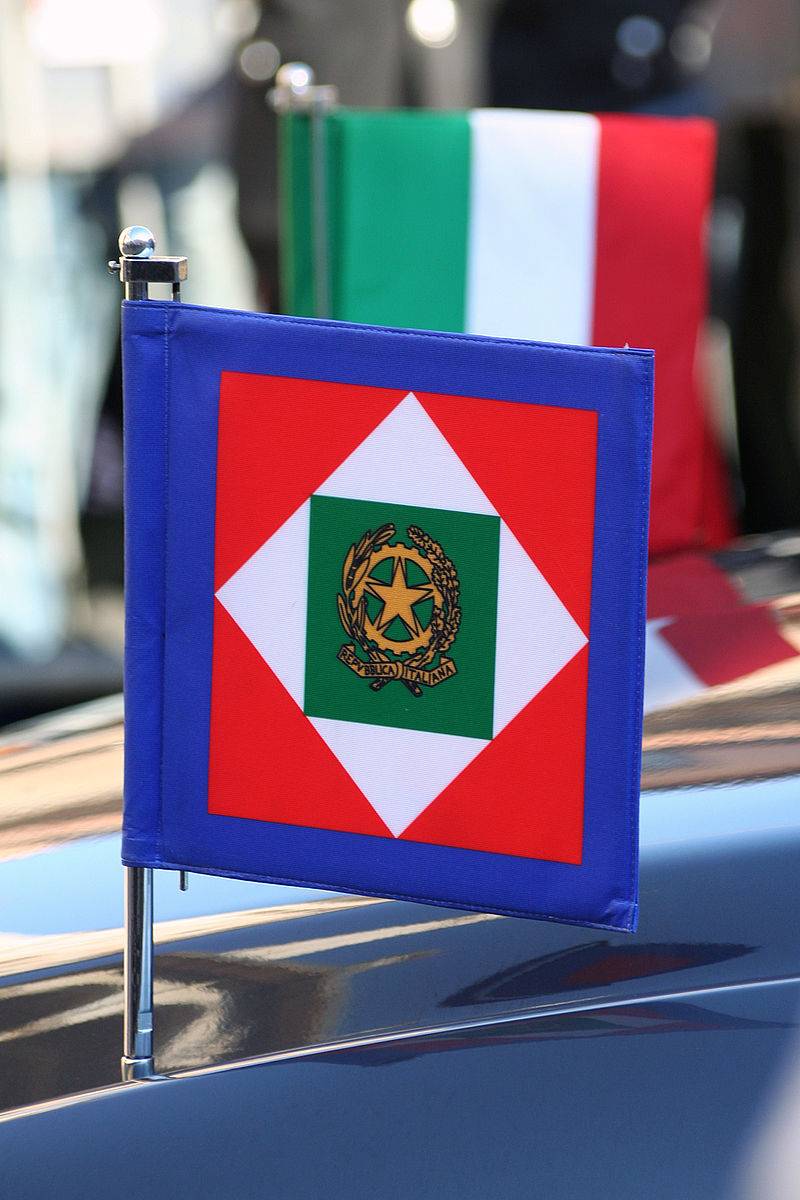 The modern standard of the President of Italy. Approved November 4, 2000
In 1946, in connection with the liquidation of the monarchy in the country and the proclamation of the republic, the Savoy coat of arms was removed from the state flag, so that now Italy has the flag we know today. But the traditions of veneration of the Virgin Mary in the country have been preserved, so the blue color was also awarded to the ribbons of the Highest Order of the Holy Annunciation (an order established first by the Savoy dynasty, and then adopted in the Kingdom of Italy), the medal "For military valor" (three degrees) and the military award - the cross "For military valor".

Regions and cities also have their own flag in Italy. Moreover, many flags have survived from ancient times, while others have appeared relatively recently. The drawings on them are quite modern. By the way, many of them have a blue cloth, which once again indicates how popular it is in the country. 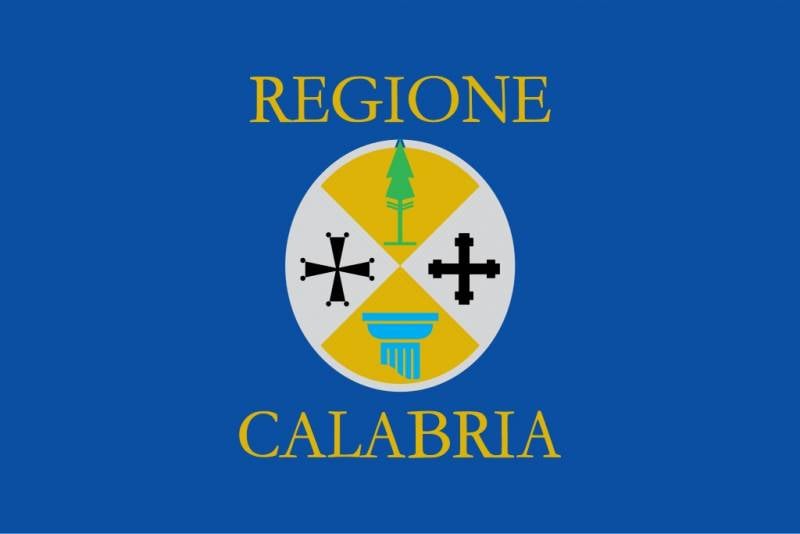 Flag of the region of Calabria 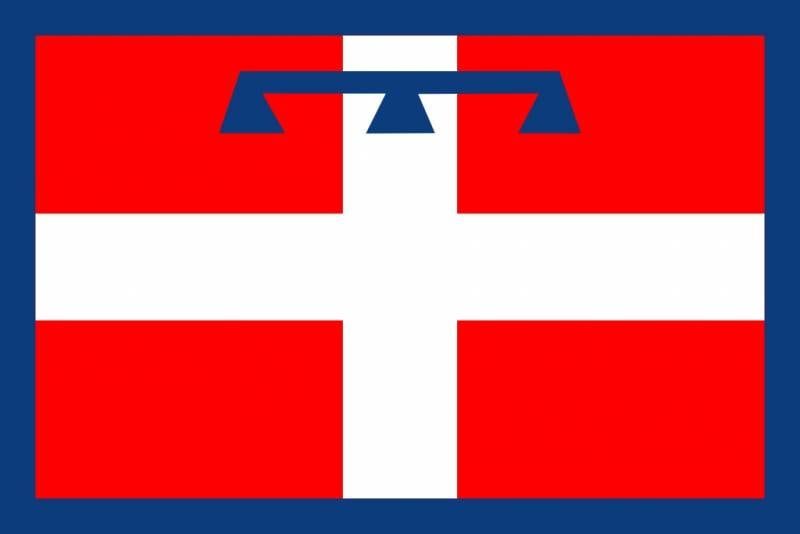 Piedmont region flag. All emblems on it, including the lambel, are very ancient 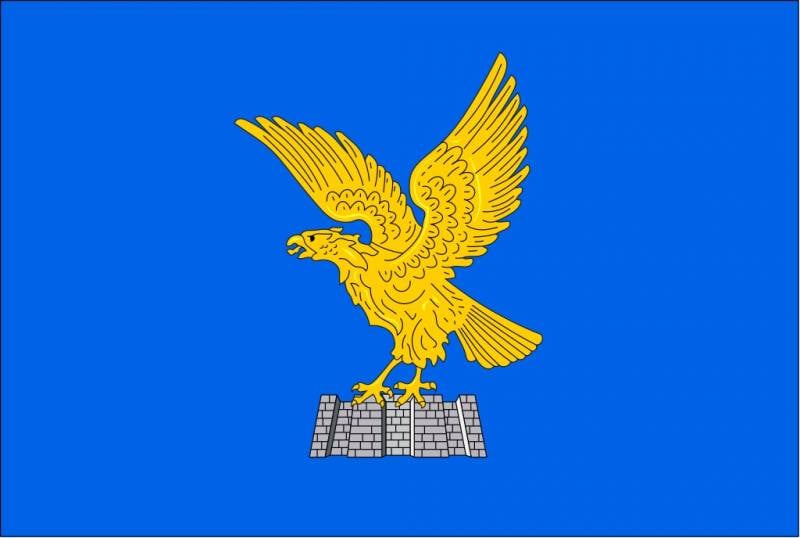 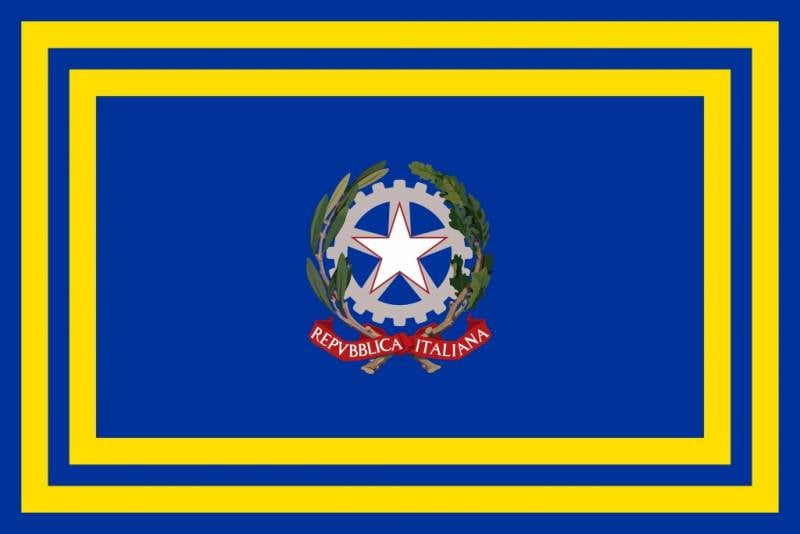 And this is the flag of the official, the Prime Minister of Italy
It is obvious that the formation of the national flag in Italy has a long history, is based, one might say, on centuries-old traditions. And in the end it gave a good result. After all, the basic colors of the flag have not changed for many years!

Ctrl Enter
Noticed oshЫbku Highlight text and press. Ctrl + Enter
We are
Chernobyl notebook. Part of 3Famous flag of unknown country
181 comment
Information
Dear reader, to leave comments on the publication, you must to register.