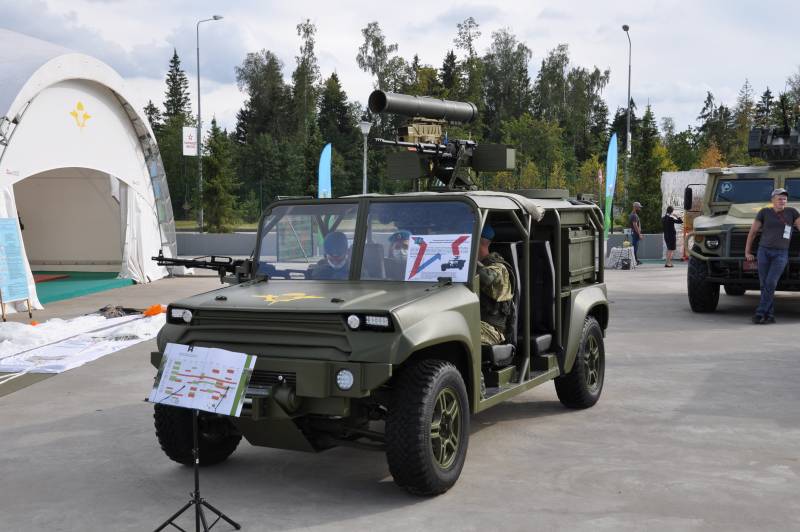 Buggy for the Airborne Forces at the Army-2020 forum in Kubinka. Source: rusarmy.com

As you know, in the triune combination of mobility, armor and firepower, it is impossible to achieve a high development of all parameters together. One can only grope for the optimum point. However, if you sacrifice one of the parameters, the rest can increase many times. It was according to this recipe that a multipurpose airmobile vehicle was built, which is still called the abbreviation MAA. This is the next generation of a combat buggy, completely devoid of booking, but due to significant relief it is capable of high-speed rally raids and the installation of heavy weapons. In many ways, MAA is the older brother of the widely advertised buggy "Chaborz", developed by order of the Russian Special Forces University in the city of Gudermes. "Chaborz" is actually capable of transporting only equipped soldiers, which seriously limits its combat capabilities against a well-armed enemy. The developer of the MAA initially created the car according to the patterns of the civilian automotive industry, which made it possible to create a fairly universal machine capable of carrying a wide range of weapons. By the way, there is no official information about the developer, but there is every reason to suspect this is the Scientific Research Institute of Communication and Control Systems (NIISSU). On the website of the company, which has a very distant relationship to the automotive industry, there is a very funny section: "Aerobic car". Perhaps they wanted to shorten the long "airmobile car", but in the end it turned out to be a reference to biological organisms that require molecular oxygen to function. The sketches of the "aerobic" car from NIISSU posted on the website are very similar to the IAA car, which the public first met at the Army-2020 forum and the Caucasus-2020 strategic exercises. 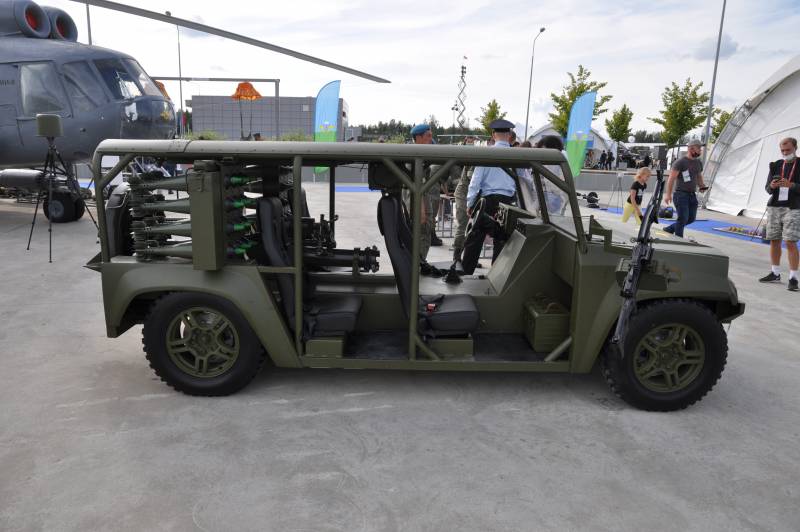 It seems that the 120mm mortar overloaded the machine, but the suspension here is only moved to the minimum position relative to the surface. Source: rusarmy.com
The design of the multipurpose airborne vehicle is based on a solid frame, additionally reinforced with a tubular frame. The small size of the buggy is explained by the possibility of transporting the machine on board the Mi-8 AMTSh helicopters. The apparent simplicity of the MAA is deceiving. For example, an independent suspension capable of changing the ground clearance from 320 mm to 120 mm. This is not necessary to lower the silhouette of the buggy, but for smooth loading into the tight cargo compartment of the helicopter. In the maximum suspension position, a fairly squat car will be able to overcome relatively small bumps. In the intermediate position of the suspension, the ground clearance is 270 mm. A four-cylinder turbodiesel ZMZ with a capacity of 142 hp was chosen as the power plant. from. and a working volume of 2,3 liters. According to the developers, a car weighing more than 1,2 tons is capable of accelerating to 150 km / h, while gaining the first hundred in 8,2 seconds. If you can still believe in the value of the maximum speed, then such a rapid acceleration of the MAA must be checked. 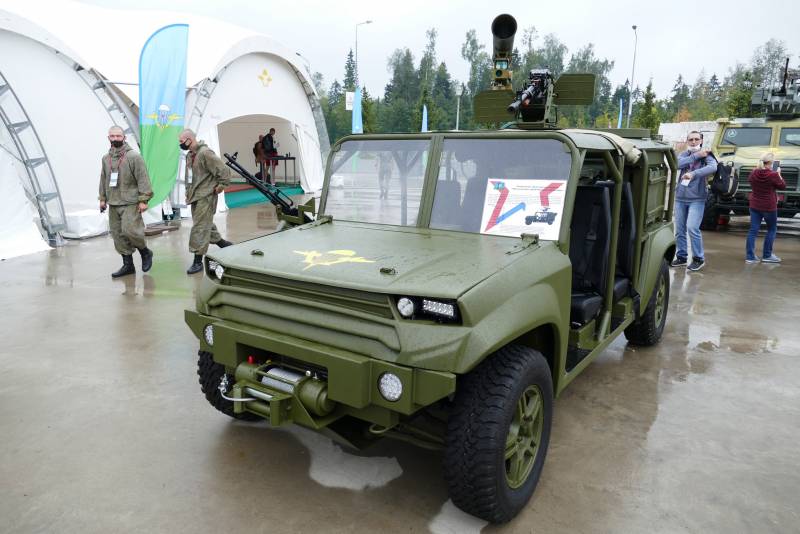 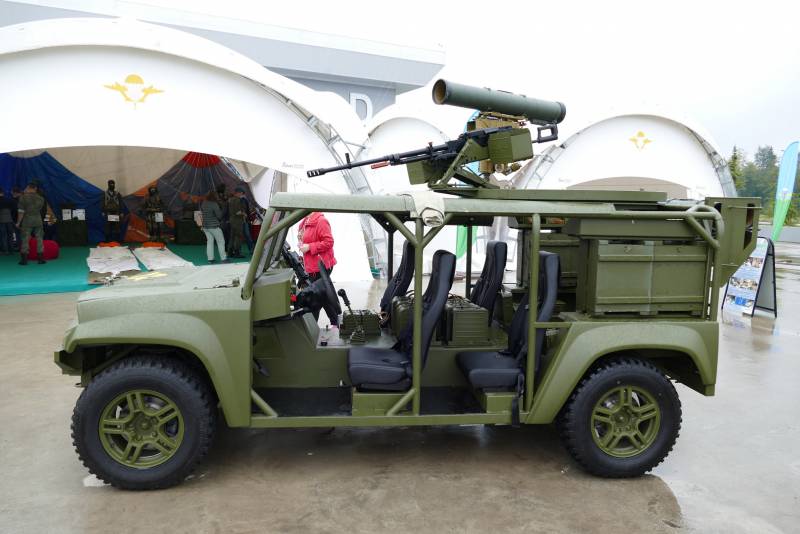 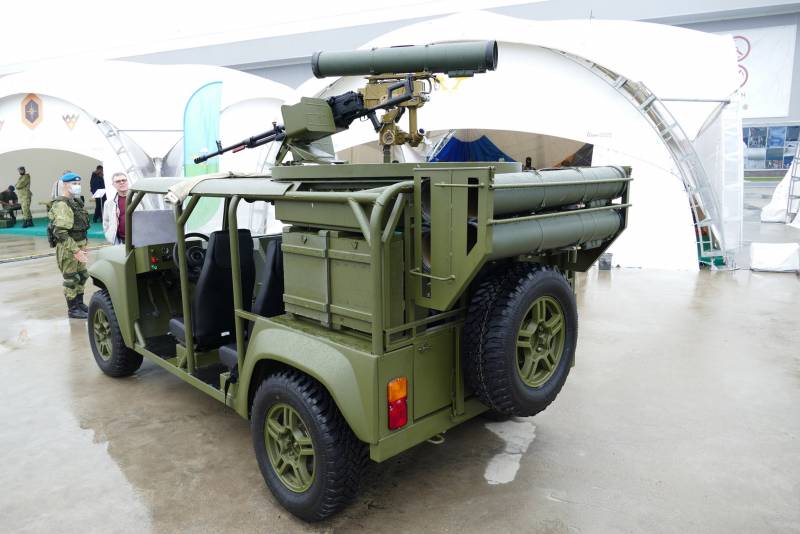 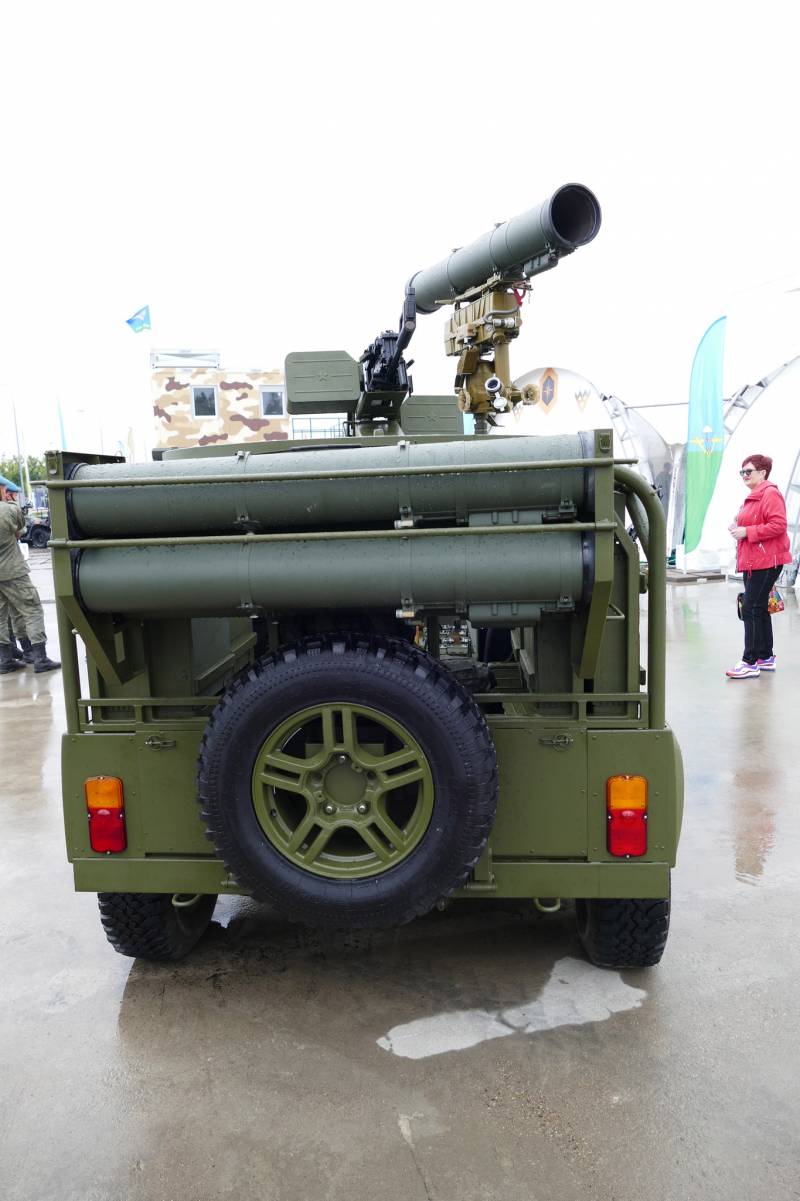 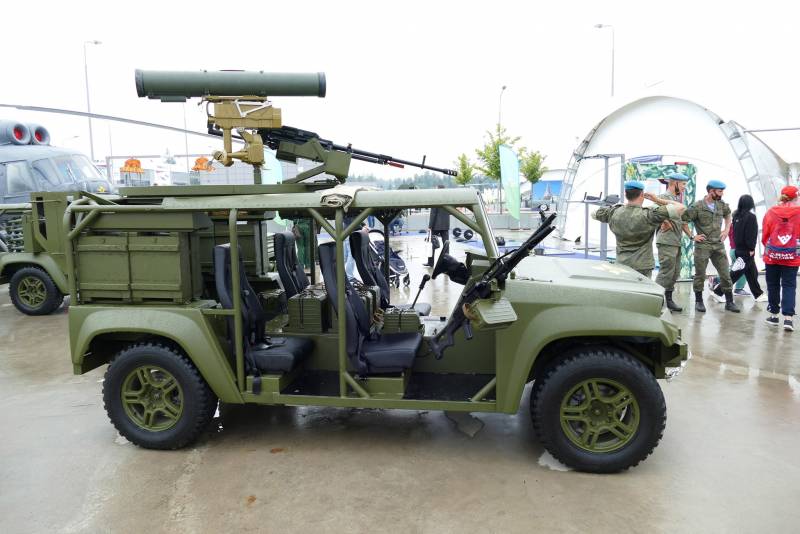 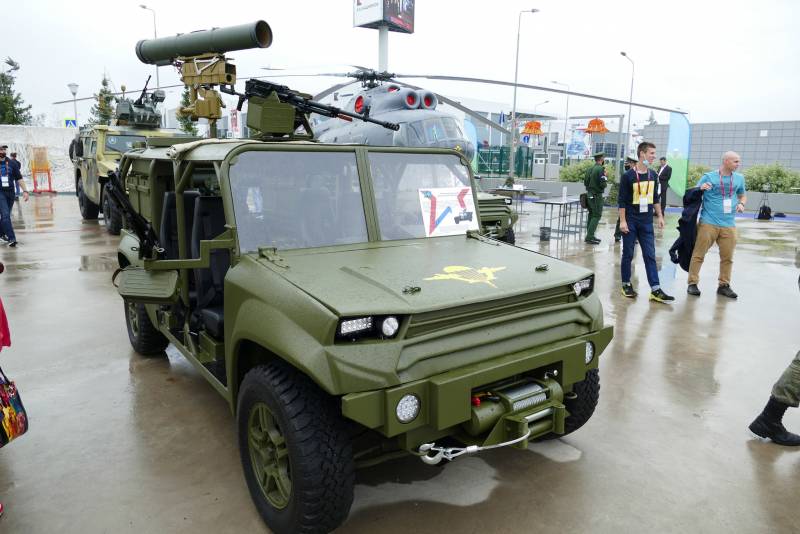 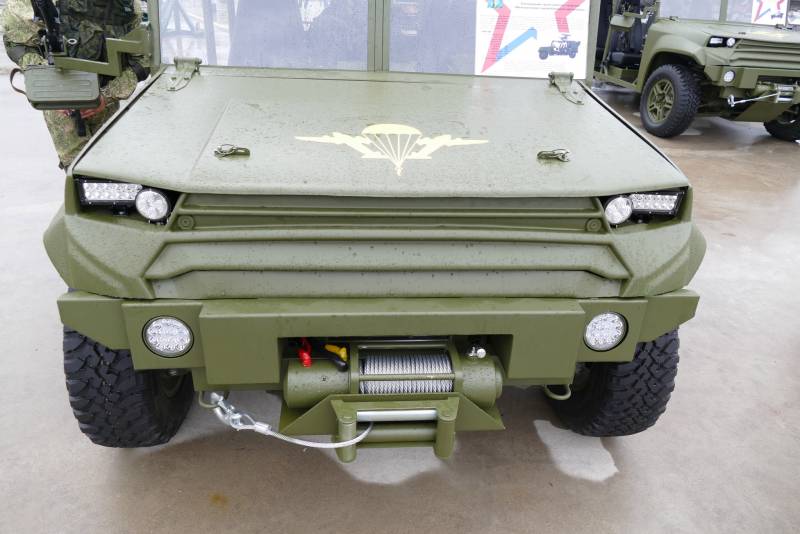 Anti-tank multipurpose air transport vehicle. Pay attention to light-alloy wheels and an impressive stock of ammunition for machine guns and missiles for ATGM "Kornet". Source: yuripasholok.livejournal.com
The ambiguity is brought in by the sign, which was located near the car displayed at the "Army-2020". It is not completely clear: 1200 kilograms is the curb weight or the weight of the car with full load. If possible, take on board five equipped fighters, also with a large-caliber machine gun, probably curb weight. In this case, the total mass can be approached already to two tons, and the indicated speed will be extremely doubtful. But with one driver and without weapons, MAA will be able to bypass some Vesta, Rio or Solaris at a traffic light. The developers claim that as an alternative to a manual gearbox, an automatic gearbox can be installed on the MAA. This is definitely a definite plus: the driver will be able to drive the car with one hand in case of injury. But now in the domestic automotive industry there is no automatic gearbox of its own design of this class, therefore, either a foreign analogue or its partially localized version in Russia will be mounted on the MAA. In both cases, the Department of Defense is likely to end up with that luxury in a buggy for the Airborne Forces.

At Army 2020, the IAA was united in two faces. In one version, called MAA-OP, the Kornet anti-tank missile system was installed on the vehicle, and in the second - the Sani 120-mm mortar, which could hardly fit into the cargo compartment of the slender buggy. The engineers managed to create a truly formidable combat unit, capable of airlifting and delivering sensitive dagger strikes behind enemy lines. The self-propelled mortar, in addition to four fighters, carries an ammunition load of 24 minutes. In coordination with the self-propelled anti-tank "Cornets", the landing, reconnaissance and special forces units at the IAA will be capable of much. If you focus on the site of the alleged developer NIISSU, then the machine will be offered to the customer in five more versions, in addition to those described above. Assume a transport 6-seater MAA, an ambulance for one lying wounded, a cargo 2-seater, a technical vehicle and a reconnaissance vehicle for four soldiers of special forces. 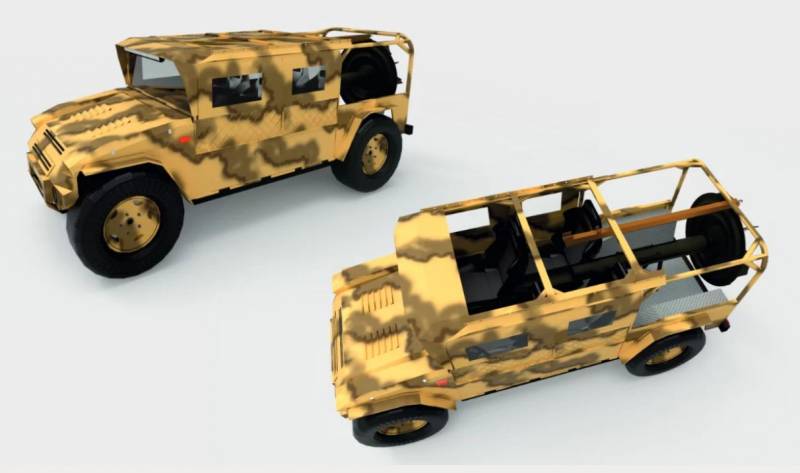 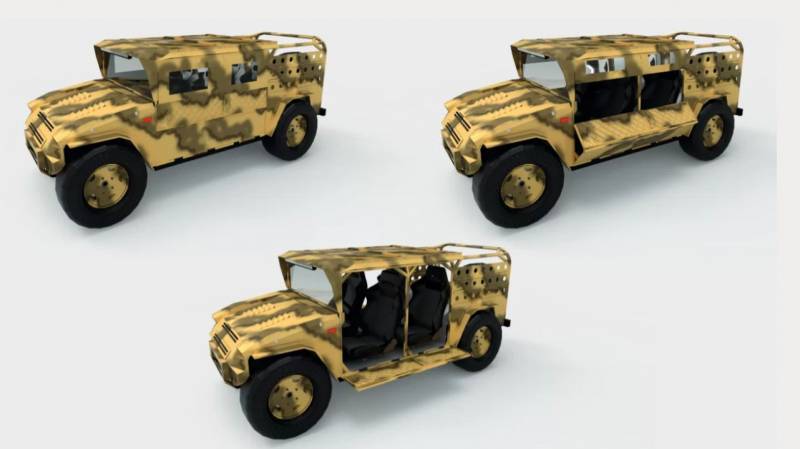 Layout solutions presented on the website gp.niissu.ru
Shown on "Army" MAA-OP can additionally be equipped with a circular turret with a large-caliber "Kord" - this particular machine is expected to become the most popular in the army. In addition, the buggy is equipped with a side turret with a PKM, from which the front passenger fighter fires. It's bristling weapons the car is partially equipped with units from the Ulyanovsk Automobile Plant. A close glance will notice the rear lighting equipment from the UAZ-3151 and the Spartan interior fittings from more modern cars from Ulyanovsk. MAA has four-wheel drive, winch, independent suspension and quite serious geometric cross-country ability. The big base of the machine spoils the overall picture somewhat, reducing the machine's capabilities when overcoming irregularities. 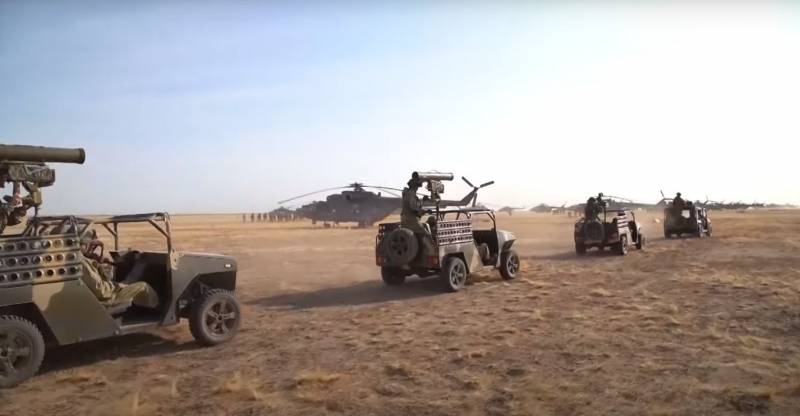 MAA in the second version of the "short" version. Exercises "Caucasus-2020". Source: youtube.com 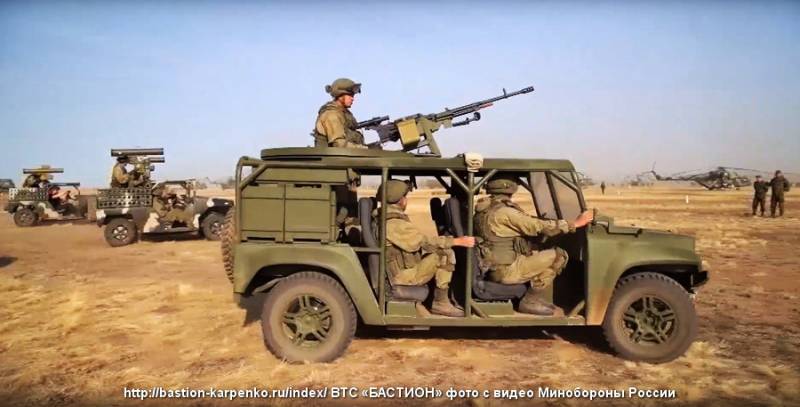 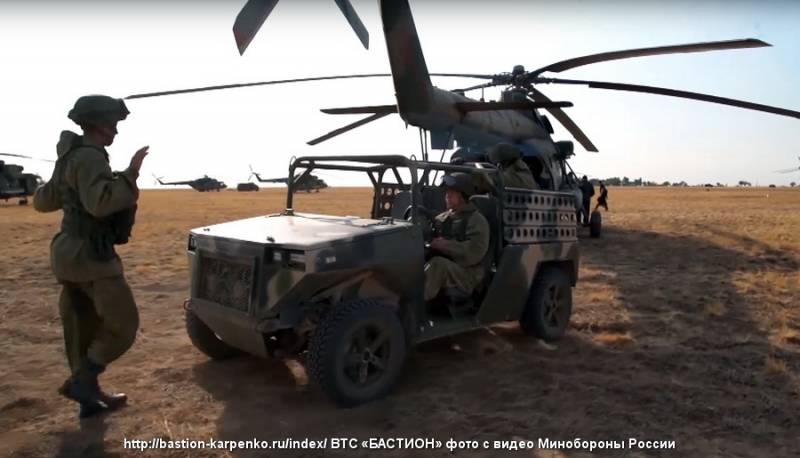 Short-base multipurpose air transport vehicles. Source: bastion-karpenko.ru
But at the Kavkaz-2020 exercises, several buggies with a short wheelbase and stylistic differences from the car presented at the forum in Kubinka flashed. Obviously, these are simplified and lightweight MAA, designed for three crew members and the installation of the Kornet ATGM. It is quite possible that a typical combat unit of the Airborne Forces on such buggies was demonstrated at the exercises. They consisted of four short-base "killers tanks"And one four-seater command vehicle with a heavy machine gun. In a video widespread on the Internet, it is the short MAA that plunges into the cargo compartment of the helicopter. There is no information yet about how well the long version fits.

History with the advent of a multifunctional airmobile vehicle in the media space, it perfectly illustrates all stages of the assessment by the Ministry of Defense of new types of weapons. Initially, the customer is presented with new items at the Army forum, then the best samples are tested in exercises, and then in combat conditions in Syria or the North Caucasus. Therefore, in the very near future, we should expect new informational reasons from a multi-purpose airmobile vehicle. Maybe they will finally decide on the developer.