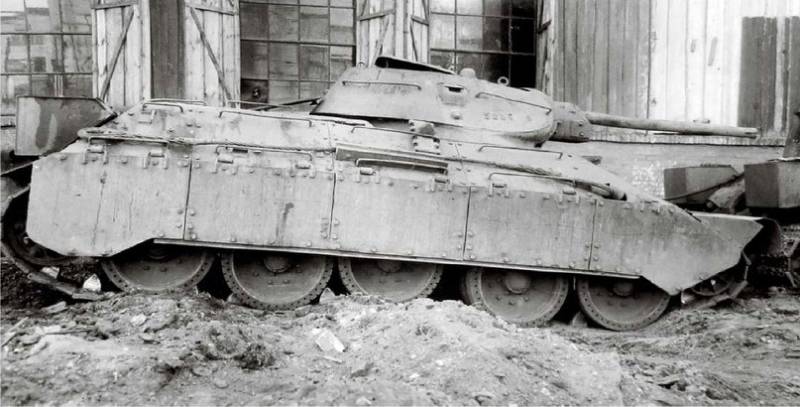 The T-48 tank shielded according to the TsNII-34 recipe. Source: pikabu.ru

Platoon, that is, shielded

In the previous part stories about the tests of German ammunition for domestic armor, the story focused on a set of countermeasures proposed by TsNII-48. The main idea was to strengthen the armor protection by welding on additional screens. This technique was far from new: at the beginning of 1941, after testing modern anti-tank guns on the T-34, it was decided to fasten additional armor screens. However, when even the smallest caliber shells hit, the armor sheets were simply ripped off. Later, there were attempts to simply weld on additional armor, but in wartime conditions the factories did not have enough resources for this. In addition, the belief was formed that excessive thickening of the welded-on armor caused premature failure of the transmission and power plant of the T-34. In fact, this was more likely the result of poor-quality assembly and a low resource of the units than excessive weight.

Be that as it may, Sverdlovsk engineers, after depressing tests of German ammunition, decided not to weld on additional armor screens. The choice fell on platoon armor, that is, located with a certain gap relative to the main one. Now we understand that it was about conventional shielding, but for 1942 it was just platoon armor. Such shielding made it possible to achieve the main thing - to reduce the total weight of the structure while increasing the thickness of the armor. As the engineers believed, an armor-piercing projectile with an explosive chamber and a delayed fuse would drastically weaken its penetrating effect if it hits the platoon armor. When the projectile hits the screen, the fuse activates it and the explosion occurs before the main armor is pierced, that is, in the gap between the screen and the armor. 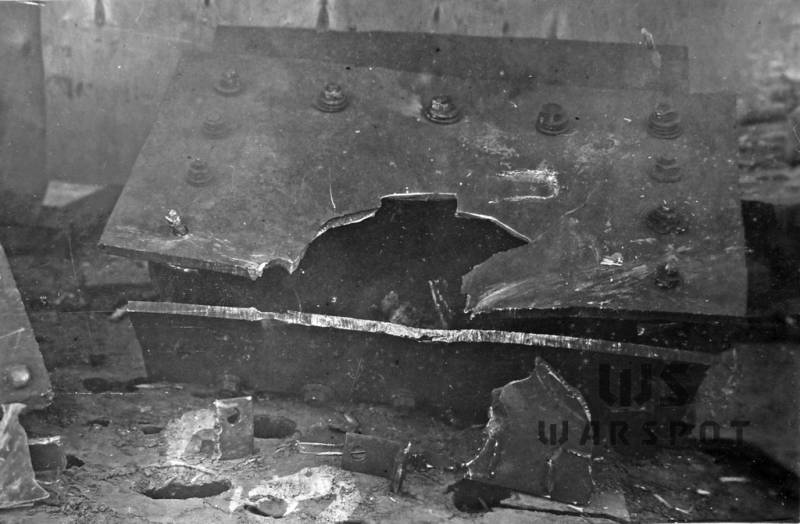 The results of shelling platoon armor. Source: warspot.ru
Of significant importance in such systems is the distance between the screen, the main armor and the thickness of the screen as a factor that determines the travel time of the projectile from the moment the fuse is brought into contact with the main armor. The engineers believed that

this time should be sufficient for the projectile to explode and to increase this time interval it is possible to use a system of several screens in front of the main armor, located at some distance from each other.
Platoon armor proved to be a universal measure of additional protection tanks... In TsNII-48, it was calculated that with its help it was possible to distance the center of the explosion of a cumulative projectile and thereby sharply weaken the effect of the blast wave (again, not a word about the stream of molten metal). Such a reservation was supposed to protect the T-34's forehead from a 75-mm HEAT projectile.

Now about the subcaliber shells, in many respects one of the most dangerous opponents of domestic armor. In the event of an attack by such ammunition, the platoon armor had to remove the pallet (coil) from the tungsten core, and it, "defenseless and fragile", split against the main armor of the tank. For such a focus, screens of the appropriate thickness were also required, spaced at a considerable distance. In approximately this way, the hinged screens were supposed to neutralize sharp-headed armor-piercing shells with welded-on heads.

Mentioned in the previous parts of the cycle, the Sverdlovsk test site of plant No. 9 and ANIOP in Gorokhovets in 1942 began testing various options for platoon armor. Since the engineers and artillerymen did not have much experience in this area, various configuration options had to be considered. It turned out that installing a protective screen close to the main armor is not as effective as installing it at some distance from it. We tried to put a thicker sheet in front of a thin one, but this turned out to be weaker than the opposite. Finally, after long experiments, it was decided to make the screens from 2P high-hardness armor.

On tests, the thickness of the screens varied from 15 to 25 mm, while the main armor could reach a thickness of 60 mm. They fired at such armored sandwiches with German 37-mm and 50-mm shells, including armor-piercing and sub-caliber shells. Tests have shown that a 15-mm shield is sufficient to protect against most ammunition of the indicated calibers. But to deal with hard-tipped armor-piercing shells, and even with delayed action fuses, 20-mm sheets of mounted armor were required. In this series of attacks at test site No. 9, we went further and tested a double screen made of 15-mm and 4-mm armor plates. It turned out that it is equivalent in protection to a 25mm mono screen. But the mass of such a two-layer hinged protection was already 8% less. The usual 15-mm screen protected against shells with an armor-piercing tip only when firing from 150 meters or more. Tests of shielded systems with a 76-mm cumulative domestic projectile showed that a 16-mm screen with 45-mm main armor, removed by 80 mm, does not penetrate almost under any conditions. Inspection of the armor revealed on the main sheets only 5-7-mm "witch's kisses" from the cumulative jet. Concerning the 75-mm German shaped-charge projectiles, the TsNII-48 engineers had to rely only on calculations that showed its lower efficiency compared to the domestic counterpart. Consequently, the distance between the front armor plate and the main one could be reduced from 80 mm to 50 mm. It is not known how much this was actually justified, since no tests were carried out. 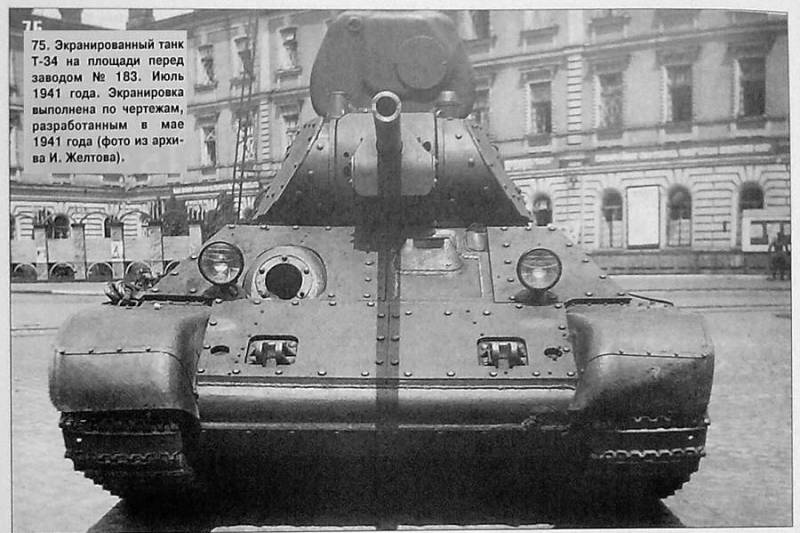 Pre-war experiments with T-34 shielding. Source: wot-info.ru
Manufacturing tolerances for German armor-piercing shells showed an interesting effect. The testers found that the fuses of the same types of 50mm projectiles were set to different detonation times, and this allowed the slowest projectiles to penetrate the shielding and detonate already in the main armor. The total share of such "defective" ammunition was small - only 5-12%. By the way, such a delayed explosion technique could well have been used by the Germans in the event of the massive use of shielded tanks by the Red Army.

Despite all the tricks, even 15-mm screens added up to 10-15% additional mass to the tank, which, of course, was undesirable. The solution was to equip armored vehicles with… leaky armor! TsNII-48 manufactured armored screens with longitudinal slots less than the caliber of the alleged German projectile - this facilitated the design by 35-50%. They mounted the received on the armor and fired at. In the case of a shell hitting solid armor (80% of cases), everything went well, the results did not differ from the tests of conventional solid screens. In other cases, the projectile slipped through the defense and hit the armor. At the same time, such a "colander", as expected, turned out to be very vulnerable: after the first hit, gaping holes remained on the screen, even if the main armor did not break through. For comparison: a solid 800x800 mm screen could withstand up to 20 hits. As a result, the experience of perforated armor was recognized as unsuccessful and further tests were abandoned. 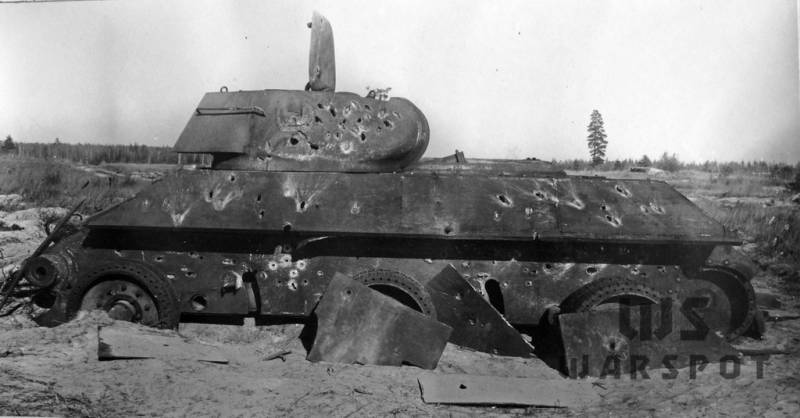 T-34 shot for research purposes. Source: warspot.ru
The solution was also to reduce the main armor of the T-34 to 35 mm with the installation of screens in 15 mm and 20 mm. This made it possible to save up to 15% of the mass, that is, in fact, did not increase the load on the tank. Such spaced armor was specifically compared to conventional 45 mm armor. It turned out that with a slight increase in the distance between the main and hinged armor, the level of protection made it possible not to be afraid of 50-mm armor-piercing and sub-caliber German shells, even at critically close distances. Actually, it was on such a scheme that the TsNII-48 stopped: to take the hinged screen away and at the same time make the main armor thinner.

The result of the research work was the decision of the State Defense Committee to build 46 shielded T-34s, of which 23 tanks with shielded sides, wheel arch liners and turrets, and the rest with only the sides and wheel flaps protected in this way. However, the main armor was not allowed to be made thinner, and the tanks still bogged down several additional tons of cargo. The machines were manufactured in the spring of 1943 at the plant # 112. In the summer of the same year, they went to the troops, where they took the first battle only in August. As it turned out, the platoon armor really successfully held 75-mm cumulative German shells, but by this time the Germans had managed to saturate the front with 75-mm anti-tank guns and armor-piercing shells. And they easily penetrated a medium Soviet tank head-on. In addition, the Nazis already had an 88-mm Pak 43/41 anti-tank gun at the front, which was not afraid of any T-34 shielding. As a result, the new T-34s with platoon armor were successfully hit by such artillery, and the idea of ​​mass production of such solutions was abandoned. In the confrontation with the armor in this round, the victory remained with the shell.

Ctrl Enter
Noticed a mistake Highlight text and press. Ctrl + Enter
We are
Is the "old" well forgotten to become the "new"? Part-2. At the call of honor and dutyIron fist of the Red Army. Motorized and tank divisions
18 comments
Information
Dear reader, to leave comments on the publication, you must to register.