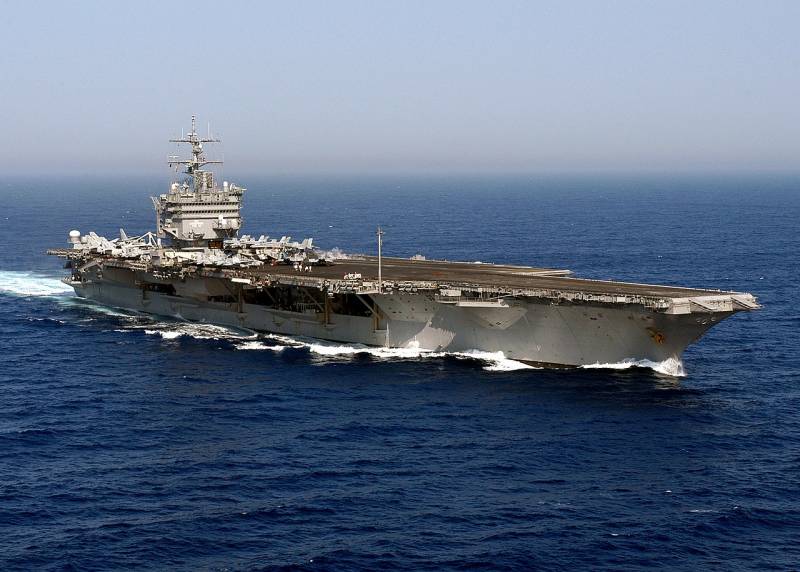 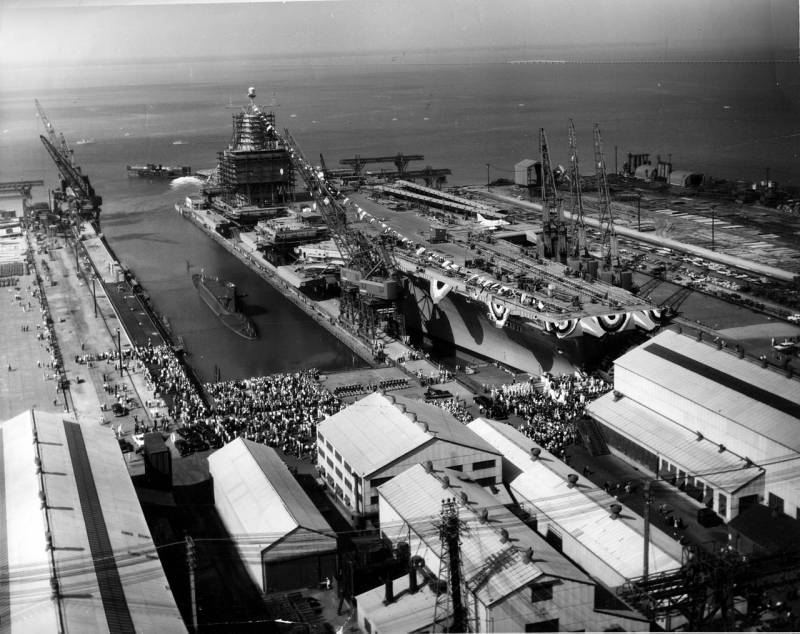 Features of the nuclear power plant of an aircraft carrier

The Enterprise was the only nuclear-powered aircraft carrier in history to carry more than two nuclear reactors. The power plant of the first nuclear-powered aircraft carrier consisted of 8 Westinghouse A2W offshore nuclear reactors. In order to provide the warship with additional security and increase survivability, the power plant was initially divided into 4 echelons (practically 4 separate power plants). Each echelon consisted of two reactors, eight steam generators, a turbine, a turbo-gear unit, and a separate propeller shaft set in motion. The fact that there were four propeller shafts was also a notable feature of the aircraft carrier. The shafts were driven by four five-blade propellers. In order to increase the maneuverability of the warship and reduce the radius of circulation, each of the four screws was equipped with its own rudder. 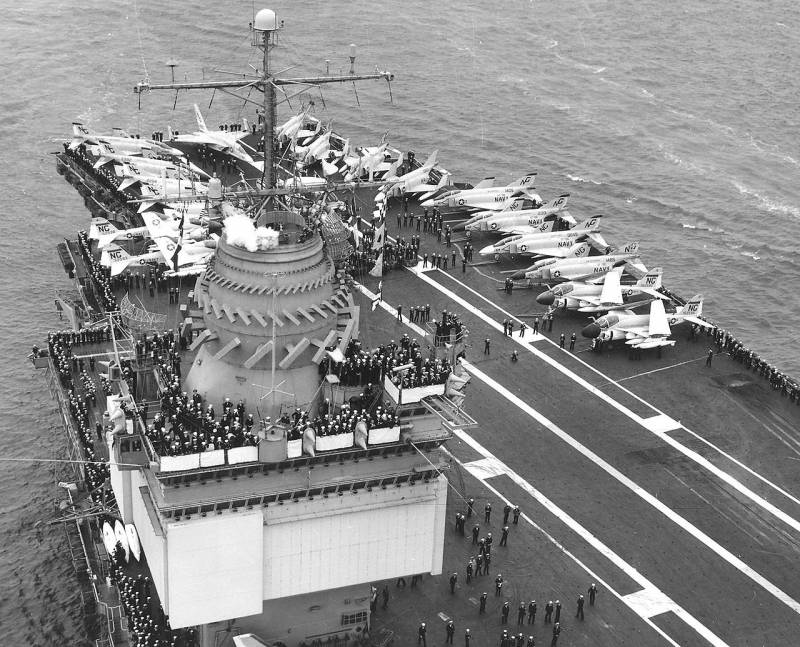 Part of the air wing of the aircraft carrier USS Enterprise (CVN-65) in 1967
The total capacity of the USS Enterprise (CVN-8) nuclear power plant, consisting of 65 reactors, was 280 hp. This power was enough to provide a gigantic ship with a maximum speed of 000 knots (33,6 km / h). The maximum cruising range of the ship without work on replacing the reactor core was estimated at about 62,2 nautical miles. In fact, the navigation capabilities of the ship in this aspect were unlimited.

To test the capabilities of the ship's nuclear power plant, it was decided to send it on a voyage around the world. Since the entire first half of the 1960s passed under the banner of human space exploration, it was decided to give the circumnavigation the symbolic name "Sea Orbit". It should be noted that the aircraft carrier "Enterprise" itself was related to the US space program. In 1962, one of the radar control stations was located on board the ship, which provided safety and tracking the flight of the first American astronaut John Glenn.

Especially for the round-the-world voyage "Sea Orbit" as part of the US Navy was created a unit "Task Force No. 1". The group included the first three ships in the US Navy with nuclear power plants on board. In addition to the aircraft carrier Enterprise, these were the USS Long Beach (CGN-9) nuclear-powered missile cruiser and the USS Bainbridge (CGN-25) nuclear-powered frigate. The purpose of the campaign was to demonstrate to the whole world the previously unattainable possibilities for autonomous navigation, which were only capable of ships with modern nuclear power plants. The operation, which was of an important propaganda nature, lasted 65 days from July 31 to October 3, 1964. During this time, three American warships made a round-the-world voyage, passing 30 nautical miles without any special adventures or breakdowns. 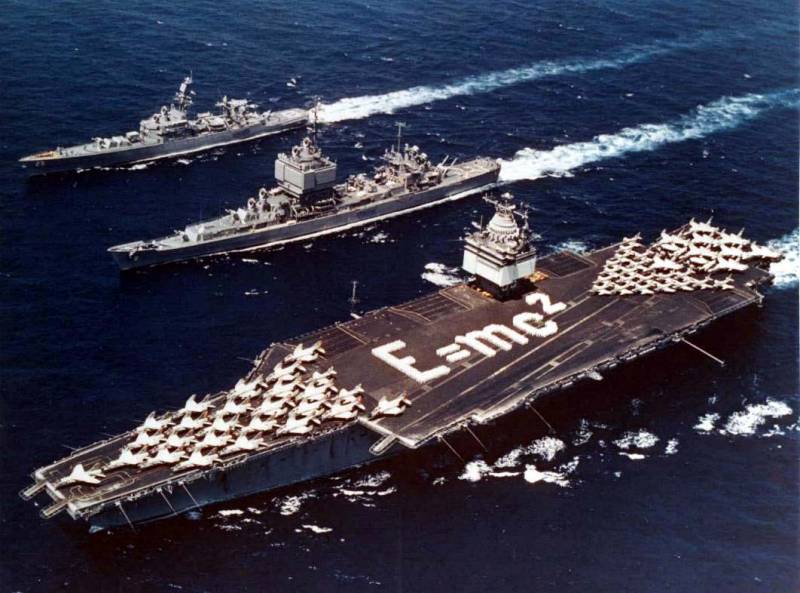 Record for longest service in the U.S. Navy

The aircraft carrier USS Enterprise (CVN-65) holds the record for being in military service with the US Navy. The ship has served in the American Navy for over half a century. The aircraft carrier was laid down at Newport News Shipbuilding on February 4, 1958. The first nuclear-powered aircraft carrier in history was launched exactly 60 years ago - on September 24, 1960. The new ship was finally introduced to the US Navy in November 1961. Its service, with breaks for repairs and modernization, lasted more than 51 years and ended only on December 1, 2012, when the aircraft carrier was officially excluded from the fleet lists. At the same time, more than 1 years have passed from the moment of being included in the fleet until the ship was decommissioned on 2017 February 55.

Since the active service life of the ship has exceeded half a century, the aircraft carrier took part in almost all significant local conflicts and operations in which the American fleet participated. The aircraft carrier made its debut during the Cuban missile crisis. In 1962, a ship in the US Atlantic Fleet participated in the naval blockade of Cuba. This was followed by the Vietnam War, in which the nuclear aircraft carrier, included in the US 7th Fleet, took part since December 1965. It was during the Vietnam War that the record for the number of combat missions made per day, the number of which reached 165, falls.

It was also during the Vietnam War that a nuclear aircraft carrier was on the verge of death for the only time. The ship, out of the reach of the enemy's means of destruction, was almost killed by negligence. Due to overheating from the jet stream of the working engine located next to the stack of 127-mm NUR "Zuni" aircraft, a spontaneous launch of one of the missiles occurred. An unguided projectile hit a nearby attack aircraft, which led to a fuel spill and a subsequent fire with detonation aviation bombs and indiscriminate launching of unguided rockets. The fire that began on the morning of January 14, 1969 was extinguished only after three hours. At the same time, as a result of explosions and fires, 28 people died, another 314 team members received injuries of varying severity and burns, and 15 aircraft were completely destroyed. The total damage from fire and explosions on board was estimated at $ 126 million. The ship repair lasted 51 days. 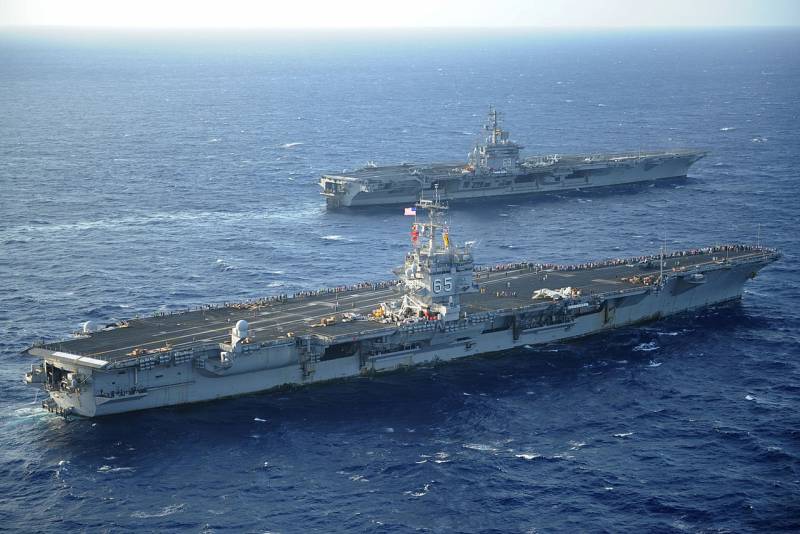 The aircraft carrier USS Enterprise (CVN-65) in its penultimate campaign in July 2011, in the foreground
Subsequently, the nuclear-powered aircraft carrier Enterprise continued to participate in the Vietnam War, and in April 1975 took part in the evacuation of American citizens from Saigon, as well as citizens of South Vietnam. In 1998, the aircraft carrier took part in the Desert Fox military operation against Iraq, leading a US-based strike force. Later, the ship was used during the hostilities against the Taliban in Afghanistan at the end of 2001, and in 2003-2004 - in Operation Iraqi Freedom. The last 8-month voyage was completed by the USS Enterprise (CVN-65) on November 4, 2012. All in all, during the service, the aircraft carrier went to sea 25 times.

The Americans abandoned the idea of ​​turning the unique ship into a floating museum. This solution was considered too expensive, complex and unsafe. It was decided to send the ship for scrap, all the weapons from the aircraft carrier were dismantled, the reactors were deactivated. The only surviving element of the first nuclear-powered aircraft carrier in history may be its “island” superstructure, which can be preserved and installed on the shore as a memorial.