Danger of transarctic raids by B-1B missile carriers. Strike from the north with the expectation of the terrain bend mode 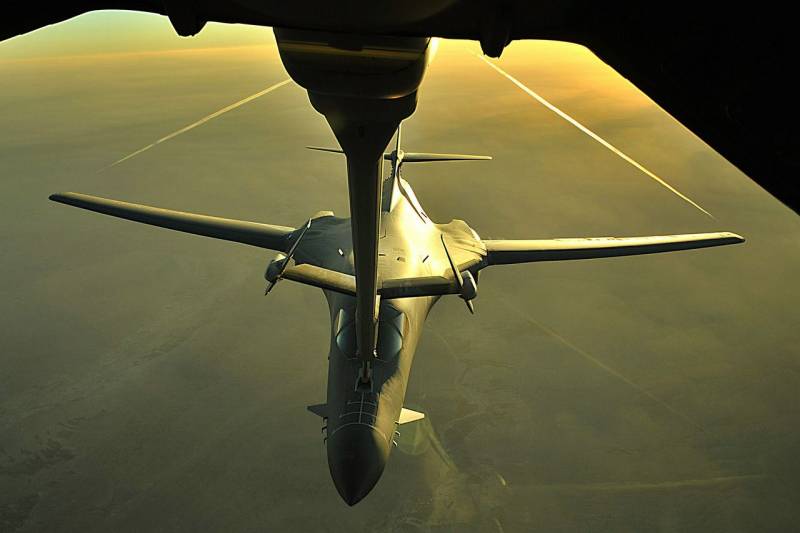 As shown by the two-week monitoring of domestic and foreign military analytical sites, online portals for monitoring regional and global air traffic PlaneRadar.ru and Flightradar24, as well as tactical online maps MilitaryMaps and liveuamap.com, the lion's share of tasks for the implementation "Friendly visits" to the borders of the Murmansk, Kaliningrad, Leningrad and Crimean air defense zones A2 / AD with simultaneous testing (software imitation) of massed missileaviation strikes against strategically important naval targets deployed in the above regions, air bases, anti-aircraft missile regiments, as well as radio and radio reconnaissance regiments were primarily assigned to the crews of the US Air Force B-52H Stratofortress strategic missile-carrying bombers.


Demonstration flights to our air lines of supersonic missile carriers B-1B "Lancer" were of an exclusively episodic nature, not to mention the fact that in most cases the operation of these machines was carried out in neutral airspace in the Arctic conventional theater of operations (over the central and northern regions of the Barents, Kara , East Siberian and Okhotsk seas). Naturally, these facts cannot but push the expert communities and knowledgeable observers into sufficiently serious reflections on the concept of using these strategic missile carriers in the upcoming regional and global military conflicts between the Russian Federation and the North Atlantic Alliance considered by the specialists of the US Air Force Global Strike Command. Why?

Should we underestimate the threat of a transpolar strike from B-1B missile carriers?

It is well known that the fleet of these very machines, which have an effective reflective surface (EOC) of the order of 1,4 sq. m in frontal projection (in comparison with 100 sq. m for B-52H), the ability to fly in the terrain enveloping mode (in the altitude range of 60-100 m thanks to the specialized algorithm of the SKN-2440 inertial navigation system in conjunction with the AN / APQ-164 and a low-altitude radio altimeter AN / APN-224), as well as ammunition from 24 unobtrusive tactical long-range cruise missiles AGM-158B JASSM-ER (they have an EPR of the order of 0,05-0,07 sq. M against 0,2 sq. m at ALCM AGM-86C / D Block IA / II) is almost the only strategic asset of the 20th Air Army of the US Air Force Global Strike Command, which is maximally adapted to perform strike operations in the theater of operations of the XNUMXst century, replete with a wide range of enemy air defense systems. Consequently, from a logical point of view, it is the Lancers that can be considered by the Main Strike Command as the key "tools" for undermining the combat stability of the Crimean anti-aircraft / anti-missile "umbrella", which cannot be said about the clumsy "Stratofortress".

Nevertheless, as the highest priority air routes for the B-1B crews to practice air refueling and carry out "digital launches" of the stealthy tactical JASSM-ER missile launchers (and their anti-ship version LRASM), the command of the 20th Air Army chooses exclusively the eastern, northern eastern, northern and northwestern (in the Arctic and Pacific conventional theaters of military operations).

This situation is due to the following factors. First, there are cardinal differences in the geographical features of the deployment of anti-aircraft missile regiments of the Russian Aerospace Forces and the air defense forces of the ground forces in the Republic of Crimea, as well as in the Arctic and Far Eastern regions. In particular, the positions of dozens of anti-aircraft missile battalions and regiments Buk-M1-2 / 2, S-300PM2 and S-400, covering strategically important facilities of the Western Military District in Crimea, are scattered at a distance of about 30-70 km from each other. As a result, the 22S39 and 40N6E9 / 36N30E illumination and guidance radars attached to these anti-aircraft missile systems and placed on 6- and 2-meter masts and 92V6MD universal towers provide the formation of a continuous and stable anti-aircraft / anti-missile "barrier" in all low-altitude sections of the airspace without exception. Russia over the Republic of Crimea, because the range of the radio horizon for the 22С9 illumination radars placed on 36-meter masts is 65 km for the B-70B "Lancer" missile carriers operating at 1 m altitudes and 37 km for AGM tactical missiles "creeping" 20 meters from the earth's surface -158B, while for 30 / 92Н6Е radars on 39-meter towers, the radio horizon range for similar target types is 58 and 44 km, respectively.

Conclusion: with the maximum degree of probability, the Lancers' massive missile and air strikes on the strategically important military infrastructure of the RF Armed Forces in the Crimea and Krasnodar Territory will be stopped even taking into account the use of low-altitude flight profiles by both B-1B missile carriers and JASSM-ER cruise missiles.

As for the Arctic and Far Eastern theaters of military operations, where the positions of similar anti-aircraft missile divisions and regiments are dispersed at a distance of hundreds, and sometimes thousands of kilometers from each other (due to vast spaces with unprepared terrain and adverse meteorological conditions), here are the crews “ Lancers ", using a combined flight profile, will be able to achieve a low-altitude launch of long-range tactical missiles JASSM-ER at strategically important military-industrial facilities in the Urals and Southern Siberia. The MiG-31BM interceptors deployed at the Tiksi polar airfield and operating in conjunction with the A-50U long-range radar detection and control aircraft, as well as the Sunflower and Container over-the-horizon radar systems, are capable of stopping these "raids" of the US Air Force strategic aviation.

An equally significant role in countering ultra-low-altitude air attack weapons (including B-1B missile carriers and JASSM-ER missiles) will be played by the re-equipment of combat units of air defense missile systems and air defense forces of ground forces in the most missile-hazardous air directions of the Arctic theater of operations with the latest air defense systems S-300V4, S-350 Vityaz "And" Buk-M3 ", the ammunition of which is represented by the 9M82MV, 9M96DM and 9M317MA missiles with active radar seeker of the Slanets family from the Agat Research Institute, providing interception of low-altitude air objects" behind the screen "of the radio horizon for target designation from third-party ground and air-based radars , as well as means of electronic and optical-electronic intelligence.

Ctrl Enter
Noticed a mistake Highlight text and press. Ctrl + Enter
We are
Preparing to escalate the conflict under the cover of Ukrainian S-300s. Unusual British Air Force maneuvers on the western approaches to CrimeaUnknown details of the exercises of the B-52H flight 25 km from the northern borders of Crimea. Has the USAF achieved the desired result?
112 comments
Information
Dear reader, to leave comments on the publication, you must to register.