The mystery of the origin of the "Ukrainians" 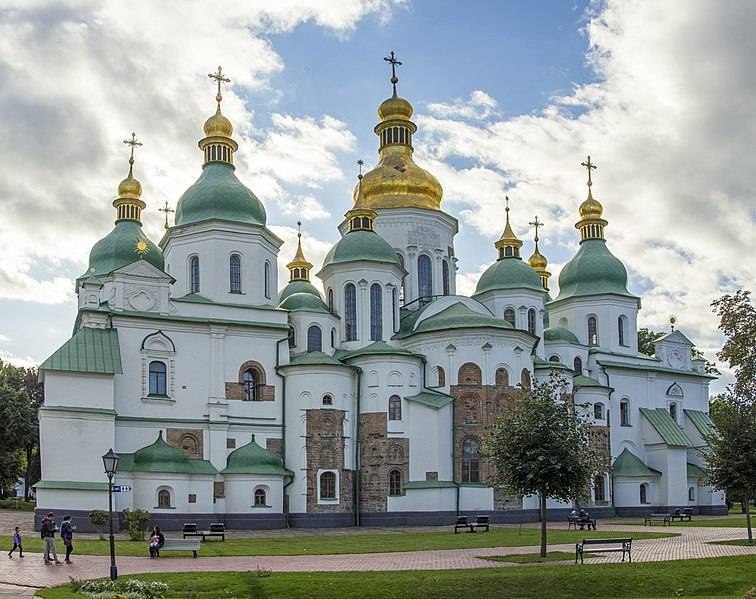 Kiev without Russia and separately from Russia is unthinkable in any case. Kiev is one of the ancient capitals of the Russian land, the Kiev region is a part of the Russian world. "Ukraine" and "Ukrainians" come from the word "outskirts", and these words appeared during the Polish occupation of the western and southern Russian lands.

The mystery of the origin of the "Ukrainians"

We live in amazing times. States, peoples and languages ​​are artificially created. Among them are "Ukraine" and "Ukrainians". Independence is a false, artificial theory that has no historical, national or linguistic basis. The emergence of "Ukrainian" is completely connected with external factors, ideological, military-political and material support of the opponents of Russian civilization (Rus-Russia). Among them are Catholic Rome, Poland, Austria-Hungary, Germany, France, England and the USA. They strove by separating an artificial ethnic "Ukrainian" community to tear away from Russia its southwestern part ("outskirts-outskirts"), to dismember a single Russian superethnos. To play off, to push together parts of the Russian people, to bleed them, in order to subordinate Russia to the West.

Interestingly, right up to the 1917 revolution, the population of Ukraine-Little Russia (part of the Russian world) in the overwhelming majority considered themselves Russian. At that time, "Ukrainians" were isolated representatives of the Little Russian intelligentsia, who became victims of Polish and Austrian propaganda. That is, “Ukrainians”, both during the times of Bohdan Khmelnitsky and Mazepa, and during the times of the leader of the Directory, Vladimir Vinnichenko in 1918, or under the President of Ukraine, Volodymyr Zelensky in 2020, are ultimately the same Russians. Only the degree of "programming" is different. If at the beginning of the XX century almost all the inhabitants of today's Ukraine considered themselves Russians and Rusyns, then at the beginning of the XXI century - only a part. Moreover, they are all descendants of Russians, they speak and think in Russian, live on Russian soil and in Russian cities.

Thus, "Ukrainization" is an artificial phenomenon, caused by the enemies of the Russian people with the aim of dismembering and destroying Russia, plundering its wealth. The existence of an "independent" Ukraine is beneficial only to the external and internal enemies of the people. Internal enemies are traitor politicians, oligarchs-thieves and the comprador bourgeoisie, which grows rich in the sale of national resources and the trade in foreign goods.

The enemies of Russia not only divided the single Russian world and people, but also began to create “history Ukraine-Rus ". They say that the Russian-Muscovites are an inferior people, the descendants of the Mongols and Finnish tribes, there is almost no Slavic blood in them. The real descendants of the Rus-Rus are Ukrainians. As a result, the entire Kiev era of Russian statehood with all the princes, heroes, victories, and an amazing rise in spiritual and material culture entered the "Ukrainian history". Here and "The Tale of Bygone Years", and "The Lay of Igor's Campaign", and Oleg the Prophet with his shield at the gates of Constantinople, and the campaigns of Svyatoslav Igorevich, and Vladimir the Baptist. And then Bogdan Khmelnitsky, philosopher G. Skovoroda, Feofan Prokopovich, Razumovsky and Kochubei, Repin and Vrubel, Glinka and Gogol and many others.

Russian history was cut off to Muscovy. They deprived her of the Kiev period. Outstanding statesmen and cultural figures of Rus-Russia were declared “Ukrainians”. Moreover, at the moment when the pro-Western version of world history ("classical") began to burst at the seams and facts began to appear in a multitude that the Rus-Russians were part of the history of the Ancient World, in Ukraine there were immediately people who declared "Ukrainians »Direct descendants of the Scythians and Aryans.

Today's Banderites capture not only the common Russian history, but have also declared themselves the masters and true heirs of the Russian Donbass, Kharkov, Crimea, Zaporozhye, Novorossiya, Severshchina-Chernigov, Kyivschina, etc. history, the fact that the Left Bank (Kiev and Chernigov region) was freed from the power of Poland only thanks to the bloody Russian-Polish war of 1654-1667, and the Right Bank Ukraine became part of Russia after the Partition of the Polish-Lithuanian Commonwealth. That in 1917 Little Russia-Ukraine consisted of only five provinces: Kiev, Podolsk, Volyn, Poltava and Chernigov. It was for such a "power" that the Central Rada claimed. In fact, it was the patrimony of Bohdan Khmelnitsky (Left-Bank Ukraine). Petliura did not even lay claim to Novorossiya, the southern part of Present Ukraine. The Rada did not apply for Galicia either. The Lviv region and the Carpathian region remained under the rule of the Poles and Czechoslovakians.

The current Ukrainian nationalists do not want to know that the Donetsk-Kryvyi Rih Republic with the overwhelming majority of the Russian population was annexed to Ukraine by Lenin only in 1918. Then the supporters of "Ukrainians" were given a very generous gift - Kharkov and Yekaterinoslav, the Donetsk basin, the adjacent industrial areas of the former Don Cossack. The Russians were not asked to agree. The question was purely political. Also, the Ukrainian SSR included the historical Novorossia, the Northern Black Sea region, developed, rebuilt and populated by Russians. Newborn Soviet Ukraine received a developed industrial east and ports in the south.

Galicia and Volhynia were presented to the Ukrainian SSR by Stalin in 1939 (he took them away from Poland). As well as Transnistria and Bukovina, which were recaptured from Romania in 1940. Subcarpathian Rus (Carpathian Rus) was part of the Austro-Hungarian Empire, then Czechoslovakia, in 1939 it was occupied by the Hungarians. And only in 1944 the region was liberated by the Red Army. Stalin included Prykarpattya in Ukraine. After the war, Lviv, which was inhabited at that time mainly by Poles, became a "Ukrainian" city. In fact, the western part of present-day Ukraine is all gifts from Joseph Vissarionovich. For this he was given a large monument in Lviv. In 1954, the new Soviet leader Khrushchev incorporated Crimea into Ukraine. Before that, the peninsula was part of the RSFSR and was inhabited mainly by Russians. Thus, Russian and Soviet rulers created modern Ukraine with their gifts!

How the "Ukrainians" were created

Having opened any Soviet or pre-revolutionary history textbook (nowadays, many textbooks have already been rewritten to please politics), you can find out that before the period of feudal fragmentation, the capital of Russia was Kiev. Inhabited by South and Western Russia (western part: Carpathian and Galicia-Volyn Rus, Transnistria and Danube) Russian. They were also called Rus, Dew, Rusich, Rus, etc., but this does not change the essence. These same Russian-Rus (millions of people!) Lived on the lands of their ancestors in the following centuries. During the Horde, the Polish-Lithuanian occupation, the uprising of Bohdan Khmelnytsky and Mazepa.

All documents, historical annals show that in the XVI-XVII centuries. Southern and Western Russia (the Greeks began to call this region "Little Russia") were inhabited by Russians. There was no radical change in the ethnocultural and linguistic appearance of Chernihiv and Kiev regions. Communities of Tatars, Poles, Jews, etc. appeared, but the bulk of the inhabitants were Russians. Where did the millions of "Russians" go later, in the XNUMXth-XNUMXth centuries, and where did the "Ukrainians" come from?

During the reign of Catherine II, almost all areas of Kievan Rus were reunited in one empire. They were recaptured from the Turks, Crimean Tatars and Poles. At this time, the feeling of all-Russian unity was experiencing a new rise. At this time, a largely artificial theory about the triune Russian people was adopted: Great Russians, Little Russians (Ukrainians) and White Russians. That is, the Russians were divided into three branches (already a step towards dismemberment), but it was recognized that the people were one. The theory of a “separate Ukrainian people” was recognized only by a few Ukrainian representatives of the Little Russian intelligentsia. Moreover, this theory was alien, brought from "think tanks" in Rome, Warsaw, Vienna and Berlin with the aim of dismembering Russia and the Russian people, weakening it, pitting Russians against Russians. The people did not support her and were indifferent to nationalist myths.

The Petliurites, who tried to create "Ukraine", suffered a complete defeat. The people in Little Russia and New Russia for the most part supported the Whites, Reds, or Makhnovists. Only the internationalist revolutionaries after the civilizational and state catastrophe of 1917 decided to create a Soviet Ukraine and the "Ukrainian people." Ukraine and the "Ukrainian people" were created by a directive order, having enrolled in it millions of Russian people. Since that time, the Soviet government supported only that part of the society that was considered "Ukrainian" in Ukraine. For this, the policy of Ukrainization was pursued, the Russian urban culture was destroyed, and the rural “Ukrainian” culture was actively promoted. This Sabbath was covered by Stalin. Then everything repeated itself after the Nazi occupation and under Khrushchev. Under Brezhnev, there was a rollback again, innovations did not take root. Ukrainization won only after the collapse of the USSR and the creation of an "independent" Ukraine. However, this does not negate the fact that Kiev, Chernigov, Poltava, Kharkov, Odessa and Lvov are Russian cities, and Little Russia (Russia) is part of the Russian world. And today's Ukrainians are Russians.

Ctrl Enter
Noticed oshЫbku Highlight text and press. Ctrl + Enter
We are
On the other side of the “red” and “white”. Izborsk Club ReportMalorussky project: on the solution of the Ukrainian-Russian national issue
180 comments
Information
Dear reader, to leave comments on the publication, you must to register.