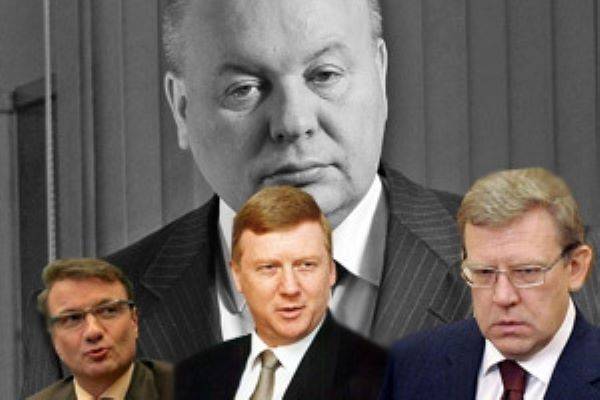 Today it is difficult to compare the "Chubais case" with the Lenin case: if it lives, it somehow does not win very well. The plans for privatization, the big one that liberal economists have dreamed of for years, are being implemented with a creak, and few people are now really considering this source of budget replenishment seriously.

However, there are exceptions confirming the rule, and quite numerous. Only to remind of their own craving for transferring the state, which means, the tightly regulated part of the economy, to purely private rails, very few dare.

But even among them it is impossible not to single out Alexei Kudrin, now quite successfully managing the Accounts Chamber of the Russian Federation. The other day, he proposed, instead of the expected increase in a number of taxes, to sharply increase the pace of privatization in Russia, which could bring up to 200-300 billion rubles to the budget annually. 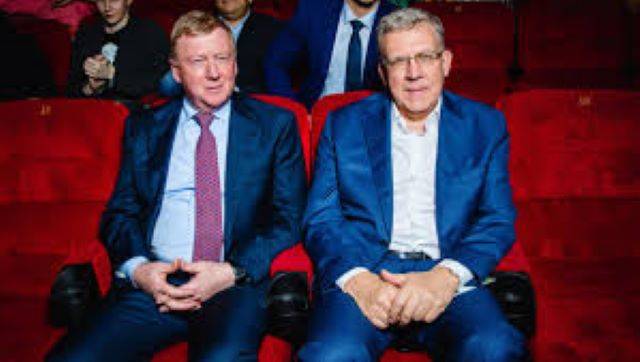 Why did Kudrin remember Anatoly Chubais's "work of life" again? After all, it seems that the current solid position does not oblige Kudrin to anything. It seems that it is a habit, and an image, about which they say in vain that it is nothing. Kudrin is an undisputed liberal economist, and he a priori cannot be against a decrease in the state's share in the economy.

However, the speech of Alexei Kudrin is still slightly embarrassing, especially if we recall that at a time when one of his predecessors, namely Sergei Stepashin, was at the head of the country's most important control body, the plans to repeat the privatization actions of Anatoly Chubais seemed to have been given a big cross.

Serious passions flared up around the long-awaited report of the RF JV on the results of privatization, which the press announced in 2004 as sensational and with grave consequences for many. There is still debate about what levers were used to prevent the effect of an exploding bomb.

The speech of Vladimir Putin, who actually approved the thesis about the irreversibility of privatization in Russia, could well be regarded as some kind of result in those days. This thesis, by the way, by all indications, was included in the auditors' report of the Accounts Chamber not without his, the President of the country, direct participation.

But "irreversible" does not mean that it has no continuation. In those same years, Anatoly Chubais, Russia's chief privatizer, famously shattered with his reform perhaps the country's most important natural monopoly - RAO UES of Russia. And split it into dozens of private companies with practically no profit for the budget.

But with the promise of lower energy tariffs thanks to growing competition in the industry. Since then, electricity tariffs have only increased, and usually ahead of other prices, and privatization continued in the form of placing on the free market shares of Rosneft, Sberbank and VTB during the so-called people's IPOs.

Not on the lists

People's IPOs were not the most successful attempt to attract ordinary holders of free funds to privatization - to help them become a little capitalists. It was, of course, something completely different from the game of vouchers, but with almost the same result.

The widest strata of the population were deceived because of the sharp decline in stock prices and the promised dividends. Once again. It seemed to many then that it was really time to end privatization, especially since state corporations had already begun to be created in a number of key industries. 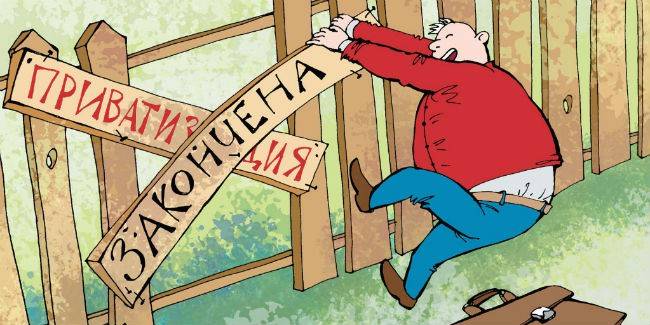 But even during the short period of Dmitry Medvedev's presidency, a real liberal attack was launched on state assets, the sale of which was trying to solve all the budget problems caused by the crisis of 2008-2009. We will not judge here the consequences for the state treasury, but the second wave of privatization was clearly not set.

After overcoming the crisis, when the situation became a little better, the deal was limited to the sale of 7,6% of Sberbank and 10% of VTB. The prelude turned out to be not the largest devaluation of the ruble and multibillion injections into structure-forming enterprises, mainly those ruled by notorious oligarchs.

Further, officials from relevant departments seriously started updating the lists for privatization, in which ordinary citizens were no longer listed, but enterprises regularly appeared, the transfer of which to private rails was refused even under President Yeltsin.

But this did not prevent such structures as ALROSA or Sovcomflot from emerging almost every year as "objects for sale", which someone has been stubbornly pulling for privatization almost since the mid-90s.

Today, in addition to these companies, the Novorossiysk Port, the legendary Kristall distillery, the United Grain Company, a solid (up to 20%) stake in Rosneft and one more a small piece of VTB.

Admittedly, Alexei Kudrin did not even mention any of these business structures in his speech. He's a strategist. And it is no coincidence that he complained that last year the budget received 11,5 billion rubles from privatization. (total! - Auth.), and 7,4 billion rubles. entered the settlement of the transaction in 2010.

However, this was not the main thing in his speech. “Our economy is still so state-controlled that we have resources of 200-300 billion rubles each. it is easy to receive a year from privatization within the next five to six years. Maybe some taxes would not have to be raised, ”said the head of the RF JV at a meeting of the State Duma's budget committee.

And again "the shadow of the father of the voucher"

The authors have considerable doubts that now, after the coronavirus economic downturn, we must continue to cling with all our strength to "the clear statement of the President of the Russian Federation in the March 2018 message that the share of the state in the economy should be reduced."

There are also doubts that in Russia it is really not worth raising taxes on the rich and the super-rich, as well as taxes on those who so barbarously draw resources from the bowels of the earth, which, in fact, belong to the entire people. We will remind that last week the State Duma received several bills from the government at once.

First, an increase in the MET rate for ferrous and non-ferrous metal ores, multicomponent complex ores, apatite and phosphorite ores, potash salts by 3,5 times. Secondly, the increase in the tax on income of citizens, which exceeds 5 million rubles a year, from 13 to 15%.

There is no doubt that the resource tax will give to the treasury no less than the expected 240 billion rubles a year. How much a rate hike can give for the rich is still very difficult to calculate. Therefore, we will simply accept Kudrin's latest theses for granted, given that his colleague from the liberal-economic camp, German Gref, has already managed to support him. 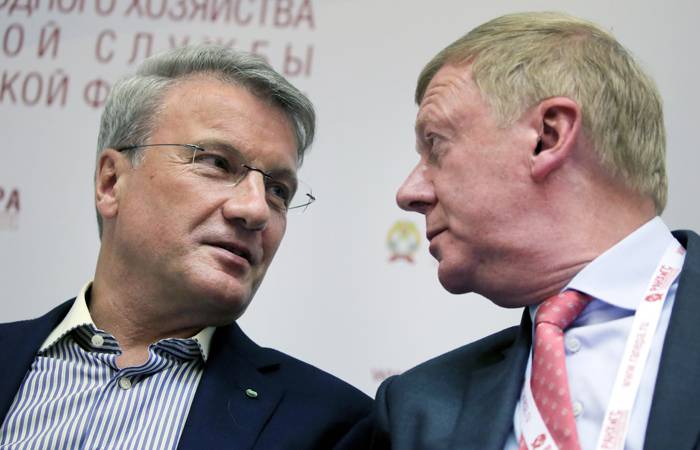 The current head of Sberbank, unlike the chief state controller, did not speak directly in favor of privatization, Chubais' laurels are not so attractive to him. But he, though a liberal and an unconditional monetarist, is also against raising taxes.

However, Mr. Gref's arguments are somewhat different. Chief among them: low tax rates are our competitive advantage. Why then did he not remember about another of our advantages - low salaries, which are too expensive for most Russian citizens?

Nevertheless, let us pay attention to the fact that German Gref, albeit indirectly, made it clear that he was not at all opposed to continuing the course of denationalizing the Russian economy. It is not for nothing that he called the sale of the Sberbank, which he heads, state and de facto and de jure, from the Central Bank to the government, one of the best deals of recent times.

Meanwhile, we at one time characterized it as nothing other than shifting funds from one sovereign's pocket to another (Sberbank is in the wrong pocket). From the point of view of production income, a change in title deeds does nothing.

And what, in general, can transfer from one pocket to another, the transfer of the owner from the bureaucratic chair to the director's office, give? Real income can only come from a product or service actually produced.

Liberals and monetarists, who are nothing more than accountants and cashiers in spirit, simply cannot understand this. Another thing is that in this way we managed to untie our hands for the use of several billion of budget funds.

Well, German Oskarovich, most likely, liked the transition from the tutelage of "tough" Elvira Nabiullina under the wing of Mikhail Mishustin, also "tough", but too busy. He has a mouth full of worries without Sberbank.

Ctrl Enter
Noticed oshЫbku Highlight text and press. Ctrl + Enter
We are
The infection of large-scale privatization of state assets struck the bright minds of the Russian economyKudrin against Rogozin, or New revelations of the ex-minister
99 comments
Information
Dear reader, to leave comments on the publication, you must to register.