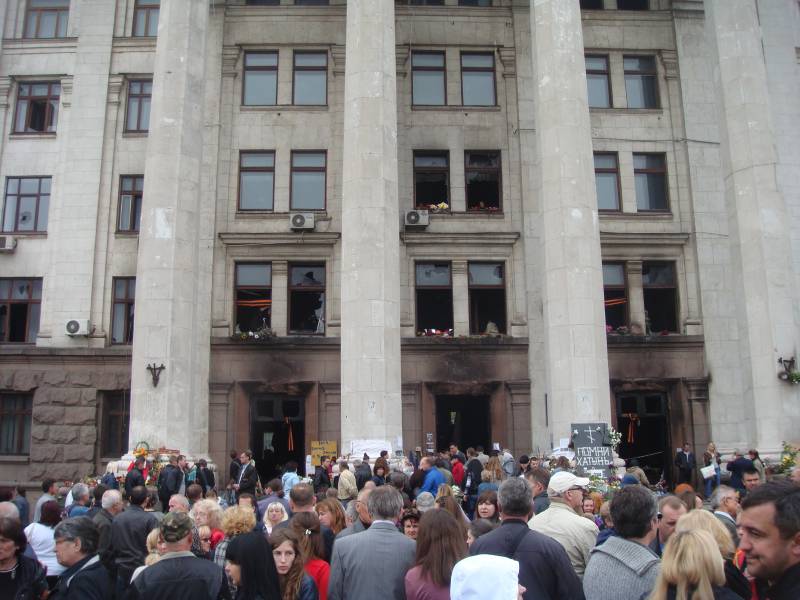 It is very difficult to talk about the terrible events of six years ago, rightly called "Odessa Khatyn", because of the overwhelming emotions. It is unacceptable to keep silent about them. Nevertheless, practically everything has been done in Ukraine today so that this tragedy is consigned to the deepest possible oblivion, and its perpetrators are reliably protected from any responsibility.


One should not even dream of any objective investigation into the circumstances of the brutal murder of at least 49 people (according to some sources, there were more victims). This became clear almost immediately after it was committed. After all, both his direct executors and inspirers and their associates in the "Maidan" coup d'etat came to power in the country. Yes, a number of participants in the clashes that took place in Odessa in those days were detained. However, the very clear position of the "investigation" was already indicated from the very beginning: all the "Maidanists", including, for example, the policeman Sergei Khodiyaka, who was accused of murdering, soon found themselves free.

On the prison bunks were actually representatives of the injured party, or rather, those of them who were lucky enough to avoid a terrible fiery death in the House of Trade Unions. Some of them received convictions, some were lucky to leave the country as a result of the occasional exchanges of prisoners of war and prisoners. No one of the killers was punished. And how could this be, if one of the main organizers of the mass extermination of people is Andriy Parubiy, in 2016-2019 - the speaker of the Ukrainian parliament. The criminal case initiated regarding his involvement in the Odessa tragedy, quite predictably, ended in nothing.

Certain hopes that at least the semblance of an investigation into the events of May 2, 2014 will be created, appeared among some especially naive Ukrainians in connection with the election of President of the country Volodymyr Zelensky. These misconceptions were dispelled pretty quickly. The new head of state categorically did not want to even remember about "Odessa Khatyn" and even more so to delve into the explosive past. In 2019, the anniversary of the tragedy was "marked" by a torchlight procession of the Nazis across Odessa. Already this year, the local regional council rejected the idea of ​​erecting a monument to those killed on Kulikovo Field, so as not to "split the country." Oblivion and mockery of the memory of those killed ...

On October 30 last year, the Verkhovna Rada of Ukraine, in which the majority were already members of the presidential party "Servant of the People", miserably failed an attempt to create a temporary parliamentary commission of inquiry on the events of May 2, 2014. Even an attempt to vote ended in an ugly fight in the session hall, which, however, is the norm for the Ukrainian parliament. This happened in spite of the fact that this commission initially assumed "an investigation into the actions of the" Kremlin's fifth column "in Odessa. However, even with such reservations, “the House of Trade Unions' ashes were not allowed to stir up the ashes.

As a matter of fact, from that moment on, the attitude of the “new government” to the Odessa events, which was no different from the “old” in matters of Russophobia and intolerance to dissent, was defined very clearly. Therefore, the statement of the Ukrainian Foreign Ministry, which on the sixth anniversary of the accusation of the tragedy on Russia and declared that it was “a link in the chain of provocations that took place within the framework of the creation of the Novorossiya project, is already perceived as a pattern.

According to the diplomatic department of "Nezalezhnaya", the House of Trade Unions flared up "from internal fires", there was simply no massacre ... let the memory of their victims be completely erased. Zelensky and his clique have clearly and unequivocally outlined their position on this issue, and the timid attempts of the local "opposition" to wake him up look just as helpless and pitiful as the politicians who are taking them.

At the same time, repeated reminders of various international organizations regarding the obligations to investigate this crime, in particular, the statement of the head of the UN Human Rights Monitoring Mission in Ukraine, Matilda Bogner, who admitted that no one was held accountable for the deaths of dozens of people, and "investigative actions" are "Selective and biased", Kiev is simply ignored. "For six years, justice remains elusive." Quote Bogner, there is nothing to add to it.

There can be no question of real retribution to the murderers and executioners on May 2, 2014, until every single participant in the Ukrainian "Maidan" is recognized as criminals, and the shameful and bloody "revolution of guiding" is a coup d'etat. There are simply no other options.

Ctrl Enter
Noticed oshЫbku Highlight text and press. Ctrl + Enter
We are
About Stalin and KhrushchevWhat you didn't want to know about England
53 comments
Information
Dear reader, to leave comments on the publication, you must to register.